NOAA is the outlier from what I'm seeing from different sources. Most predicting the cold coming in with a vengance late D-F, and above average snowfall.
_________________
Janet 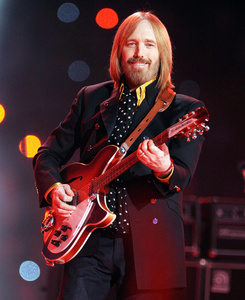 Awake and well rested Damian. The 28.4 degree reading yesterday did the trick.

There will most likely be a relaxation in teh pattern towards the end of the first week of Nov as the EPS is seeing - the Trough west of Hawaii is the culprit to pull the trough over the EC west and allow the warm Atlantic waters to bubble up the WAR. Time will tell but the heights are still high over the top but relax in the NAO region.

During the past 10 days we have seen a significant cool down in ENSO region 1+2. This greatly improves the chances of a Modoki based El Nino albeit probably weak, to develop over the next month into the winter. For those who don't know, a weak or moderate Modoki El Nino is the best ENSO setup for cold and snow in the Northeast and middle Atlantic states.

Mugs, I do not know when you became a moderator but congratulations.

mugs has always been one, I believe since the start of the forum. At least I always remember him being one, maybe I am wrong.

I was made a Moderator back in 2014, not a moderator when this great wx board started back in 2012!
Okay MJO saying not hitting the warm phase of 3 then 4 as it had yesterday but rather stall in Phase 2 - interesting. WE shall see if the wave heads east or does indeed die off.


This cross section of OCean Depth warmth is centered from about 150W to 180 W - Modoki Nino incoming? Looks to be

The orangy colors are where the upwards motion and convection will establish itself and this coincides with MJO phases 8,1,2 majority wise.

The Warm Blob in the Gulf of Alaska will help drive the EPO Negative as in 2013-14 adn 14-15 and the PNA positive - this will also help over the top heights rise for Central Canada Omega style block from what I have read.

Need this to hold for the D-F timeframe and we have a Modoki peeps which equal a snowy/cold winter with otehr variables helping of course as well. EAMT, PAC Jet Extension, NAO, AO, GWO, IO divergence, Solar Activity or lack thereof. 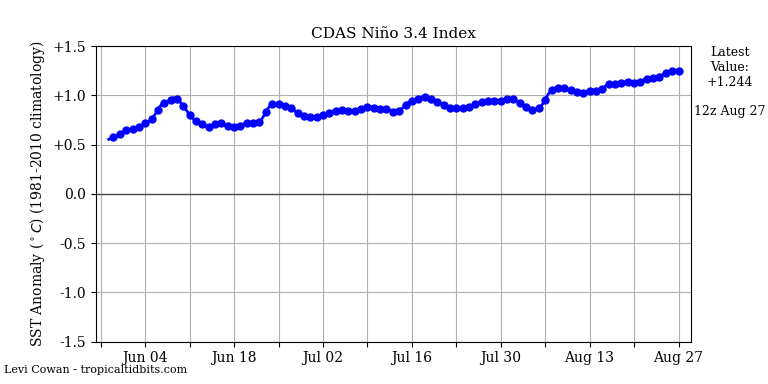 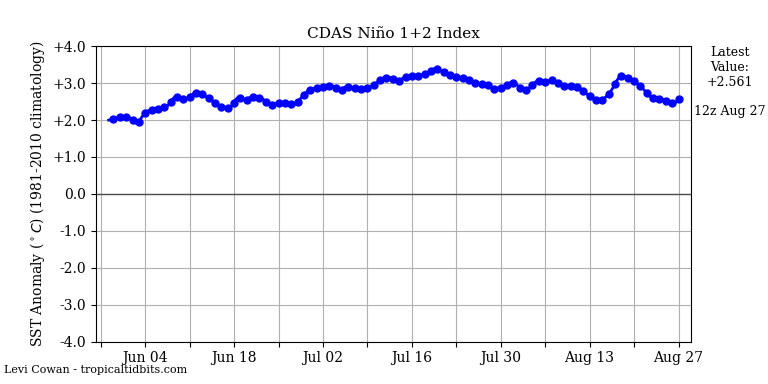 Mugs...wow I am slow on the uptake. Sorry about that.

Is the Modki a factor or a result of all other factors you mentioned (EAMT, PAC Jet Extension, NAO, AO, GWO, IO divergence, Solar Activity or lack thereof) ?

This may have imications as we move forward into late Nov and early Dec for a Stratospheric Warming Event due to this Karnes Sea/Scandinavian Block that will also aid in the Siberia Snow Cover tremendoisly. This will move over rover to pump the aluetian  low and once that gets going with the warm blob feeding it that feedback loop is going to be very strong link that will dribe a Negative EPO, Postie WC ridge, and pump a negative AO. Time will tell but lots to see and be curious over and cautiously optomistic. 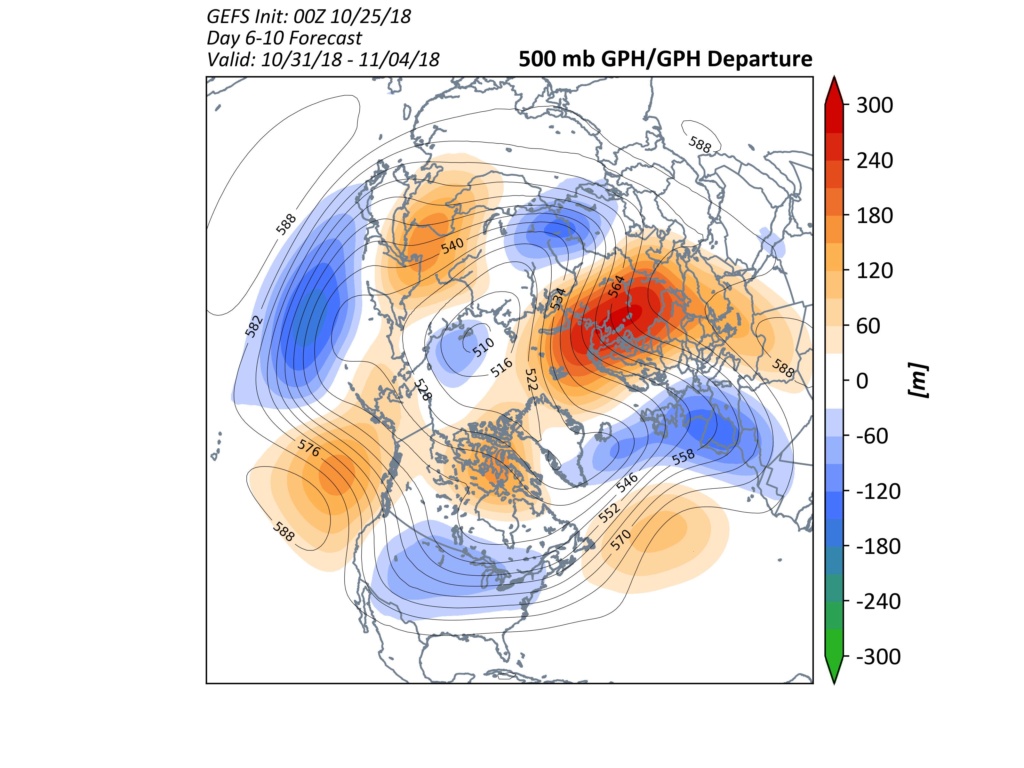 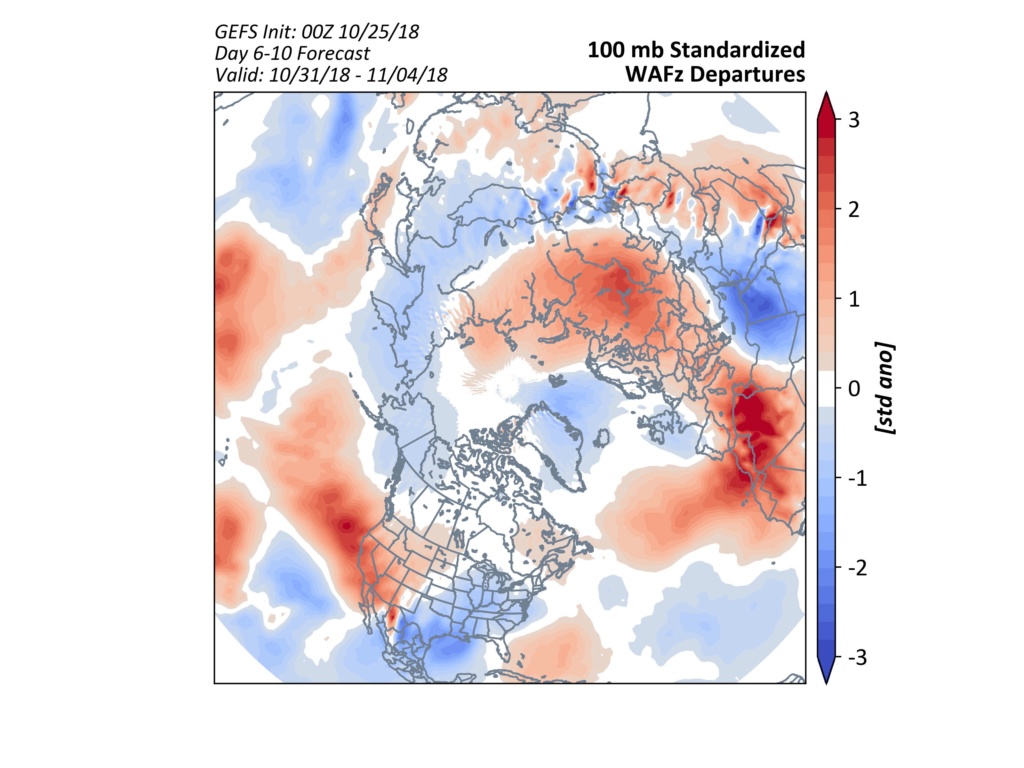 @Snow88 wrote:Models are starting to show cooler temps than before the the start of November

Due to this Tony - MJO wave dying off in phase 2 and being weak if it makes it to 3, plus you get that Scandanavian Block and you see it start to pump over teh top to the AO region
GEFS

hey folks I have a question. been following you guys for a long time and I do post occasionally . I figured this would be the right place to ask.

How does a site like accuweather get there information for a 90 day forecast? I was scrolling through it today to figure out when I need to winterize a summer house in Montauk Ny . silly question I know , but wondering if you guys here have any answers

I always thought that also.

@algae888 wrote:I have been hearing from several different sources that the polar vortex is being disturbed and will continue to be disturbed the first two weeks of November due to an anomalously strong Aleutian Ridge this would lead to cold outbreak in December if this is true

Al yes it is and we have teh Karents Sea Block or SAcandi Block shaping up again - this will retrograde and if the models are onto something it can be a stormy period of time from the second week of November through the end/beginning of December. Wish this were later December in to January cause what storms did this block help produce? Anyone? Buehler? The KINg of Modern Era - 1996!! oh and yes 2016!!!

Animation from 33&rain board pro met put up

Image showing the dive in the winds aloft or reversing 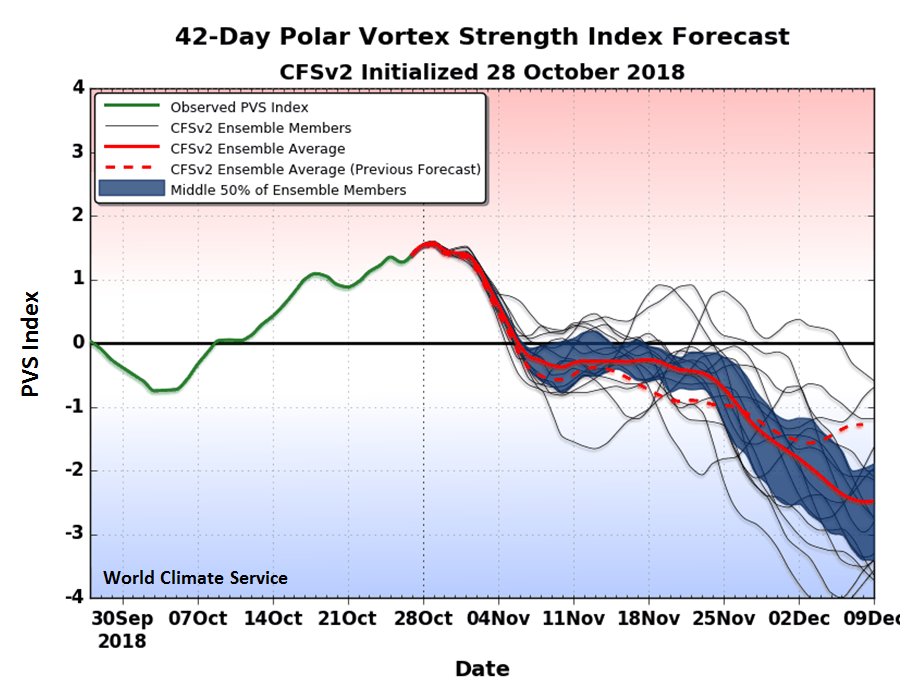 And from JH pro Met
As many have mentioned, there are several indicators that a stratospheric warming event (possibly a sudden warming event) is possible in mid to late November, with guidance suggesting a zonal wind change and warming of the polar stratosphere. It is worth noting that we are also approaching a transitional phase in the QBO from easterly to westerly from 40 to 80mb that has historically supported these sudden stratospheric warming events as well. From a fundamental standpoint, this stratospheric warming event - while quite early in the season - has plenty of support and fits quite well. How it impacts the pattern, how notable it is, and the condition in which the SPV is left afterwards are still yet to be determined.

@dkodgis wrote:Mugs...wow I am slow on the uptake.  Sorry about that.

Is the Modki a factor or a result of all other factors  you mentioned (EAMT, PAC Jet Extension, NAO, AO, GWO, IO divergence, Solar Activity or lack thereof) ?

Looks like a stormy period upcoming for November with many POSSIBLE coastals with teh Scandinavian Block or Karents Seas block forming and then retrograding into a Greenland block giving us Negative NAO.

MJO when propagating with amplitude has been a dominant driver so far this fall, and looks to cont.  Given the SSTA configuration along the entire Pac equatorial region, the MJO gaining amplitude and propagation primarily through phases 8-1-2 then back towards the center will likely be a common theme going forward as this trend has already started and looks to continue with this next wave pulse.

First here is the MJO plots from late Sept into Oct.  Starts with green in Sept.  Comes out in 8 rounds through 2 and deamplifies through 3.

It looks like we are back into a new wave propagation with a similar pattern; which given the SSTA configuration should cont well into the winter.  Below are the current MJO forecasts for the next two weeks.  Both the Eruo and GEFS have a forecast and a "corrected" forecast.  I will post the "corrected" forecast as the second image.  Notice the GEFS forecast takes the MJO well into phases 3-4 towards 5 whereas the corrected forecast does not.  I fully expect the SSTA configuration to prevent this wave from entering phases 3-5 with any amplitude.

We are in a transitional period however.  Remember the temp composites for any given MJO phase changes with the seasosn.  Meaning Phase 8 in the fall tends to be a warmer phase in the E hoqwever in the winter it is one of the coldest.  Below is the temp composites for SON and OND.  As you can see phase 2 is a cold phase regardless of which composite we are looking at.  Phase 8 is warm in the SON composite but is a cool phase in the OND composite, and phase 1 is warm in both. As Mugsy posted above I expect modeling to go towards a cooler soln overall as we head into th second week of Nov with some warmth, relative to avgs, ahead of phase 2.  BUT I don't think we torch by any stretch of the imagination. Here is a read from a gent on his wine routlook - very well done overall IMO but I generally do not agree on his Dec and Jan forecasts temps wise I am more leaning to N for Dec overall (+/-.5) and Jan SBN (-.5) but do on February - looks to be a very cold adn stormy month overall.

Fantastic posts by Al and Scott. I agree with a lot of what was said.

The Stratosphere warming is a huge deal. If we indeed see a full on sudden stratospheric warming event, and the Tropospheric PV is displaced to southern Canada prompting a -AO, then December could potentially be our stormiest month of the winter. But that would mean January could end up being a pretty dramatic thaw, but that's too early of a presumption to make. Right now, focus should be on November and December and so far I like what I see from Thanksgiving through all of December.

An east-based -NAO coupled with a -EPO in mid-November could set the stage for cold and snow for our area the week of the 18th.

Nice Cold Shot coming in next weekend. Everything seems to be progressing very nicely. Especially in the pac. A lot of ridging out west. Also Central and Eastern Canada snowpack is well above normal laying the foundation for cold shots to come into our area as we head towards winter