We're ringing in the New Year with a nice little snowstorm for those far NW of NYC near I-84. Models are still bouncing around with how far S&E the cold air gets which would give more places like NW NJ and those south of 84 accumulating snow as well.

This H5 map is valid for Saturday afternoon. The steering pattern shows much of what we have been use to so far this season. +EPO/+AO and a neutral to east based negative NAO. Virtually non-existent arctic air for the northeast. The Polar Vortex is hiding out in the Arctic circle and smaller versions of it are spinning in the northern Pacific (hence +EPO). Speaking of the Pacific, from this map you can kind of make out the strong Pacific jet stream by the tight clustering of height contour lines off the west coast. But here is a clearer view using the 250mb map:

The shades of purple/pink out in the northern Pacific with shades of red extending into the west coast prove just how disruptive this jet stream has been to our pattern. The Pacific is bombarded with waves of energy, or storms, originating all the way out in the west-central Pacific Ocean. These storms prevent areas of High Pressure, or ridging, from developing over the EPO and PNA domains which are critical to ensuring arctic air is displaced from the north pole into the CONUS. Although we have seen flashes of colder than normal weather so far this winter (remember the PNA spike in December which partially lead to our snowstorm?), it has been pretty absent the last couple of weeks. Yes it has been cold, but that is simply due to the fact it is our coldest time of year from a climatology standpoint.

Bringing this discussion back to Sunday's storm, from the 500mb map you can see how there is a jet streak present over the northeast and a closed off trough near Arkansas. Ahead of the trough, the southeast ridge is flexing its muscle and milder than normal air flowing up the east coast and into our area. Our coldest and snowiest storms tend to occur when our 500mb trough closes off east of the Mississippi and we begin seeing the trough's axis tilt from neutral to negative. In this case, the 500mb trough closed off very early (again!) mainly due to the poor steering pattern I've already talked about. The only way to combat the southeast ridge / warm air in this set-up is by having High Pressure to the north near Buffalo. This would give us a cold air mass that is needed to keep precipitation in the form of snow. Unfortunately, that HP is displaced too far east-northeast for areas like I-95 and points S&E to benefit. However, I-84 and points north will be cold enough to support snowfall.

The other issue is that the closed 500mb low that I mentioned earlier will then track well N&W of our area. It's important to know the mid-level lows like 500mb, 700mb and 850mb should track south and/or east to experience the best dynamics and ensure boundary layer temperatures are below freezing. Here is a snapshot of the GFS at 500mb and notice how the closed low is tracking over Upstate NY.

What's interesting is, despite the mid-level lows tracking well NW, the RGEM shows this much snow falling over our area:

This model is an outlier among the others, but it has impressive bands of snow sweeping across NW NJ because of how it handles 700mb vorticity. That said, we're looking at a VERY weak surface low tracking east of the 70/40 benchmark. GFS has it at around 1005mb. That is like weak sauce and does not give me confidence the RGEM is correct in predicting such strong dynamics. Factor that with poor placement of the mid-level lows, and this is a horrible recipe for significant snow. But I still believe in a 4"+ snowfall occurring for I-84 and points north. I think a 2-4" snow event is also in the cards for NW NJ and those south of I-84. Some places north of 84 are likely to exceed 6 inches of snow. I would have drawn a snow map, but my personal computer is getting fixed and my work computer does not have my usual template that I use

This is a great write up, per usual, Frank!! I’m interested to see how modeling may (or may not) adjust in the next 48-60 hours explicitly on the accounts of what you mentioned above. There’s certainly an interesting battle going on between the modeling, and I’m also interested because of our earlier discussions :p

0Z NAM hot off the press. 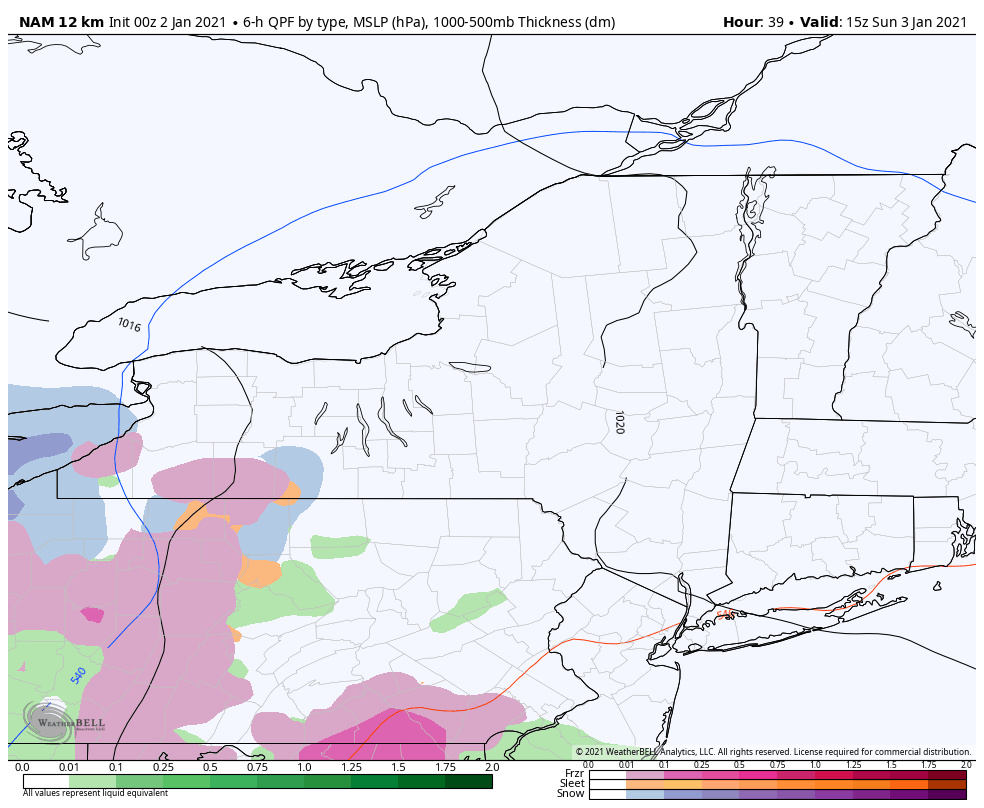 Heck whiten the ground with a minor accumulation and I'll take it.

Heck whiten the ground with a minor accumulation and I'll take it. 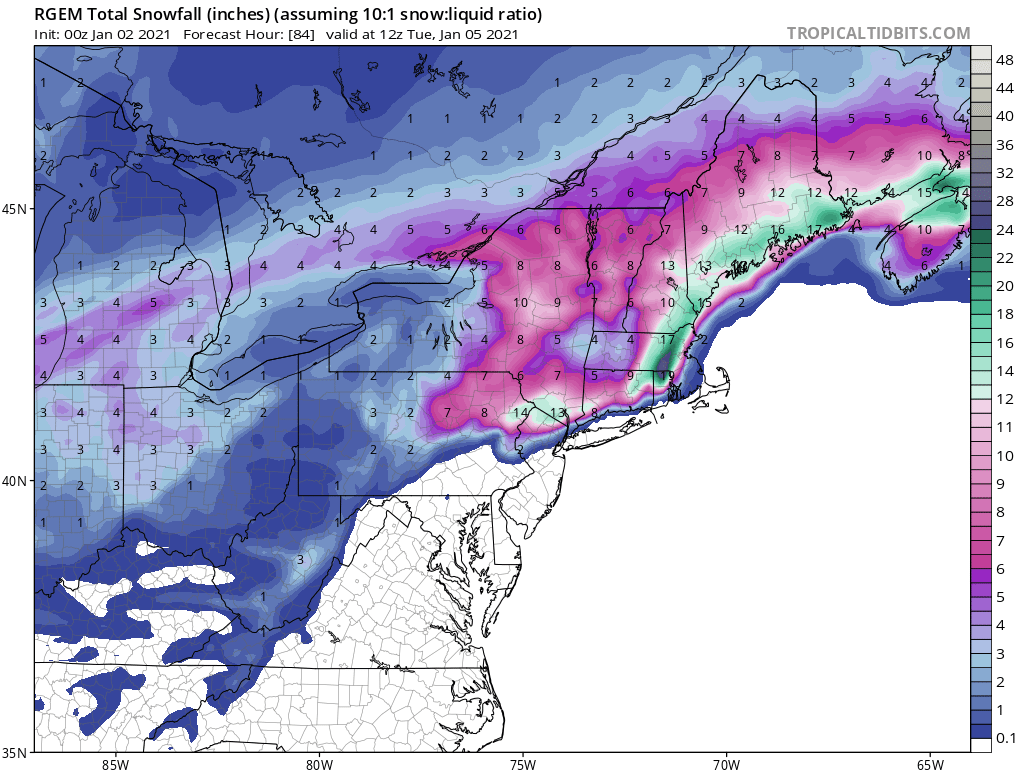 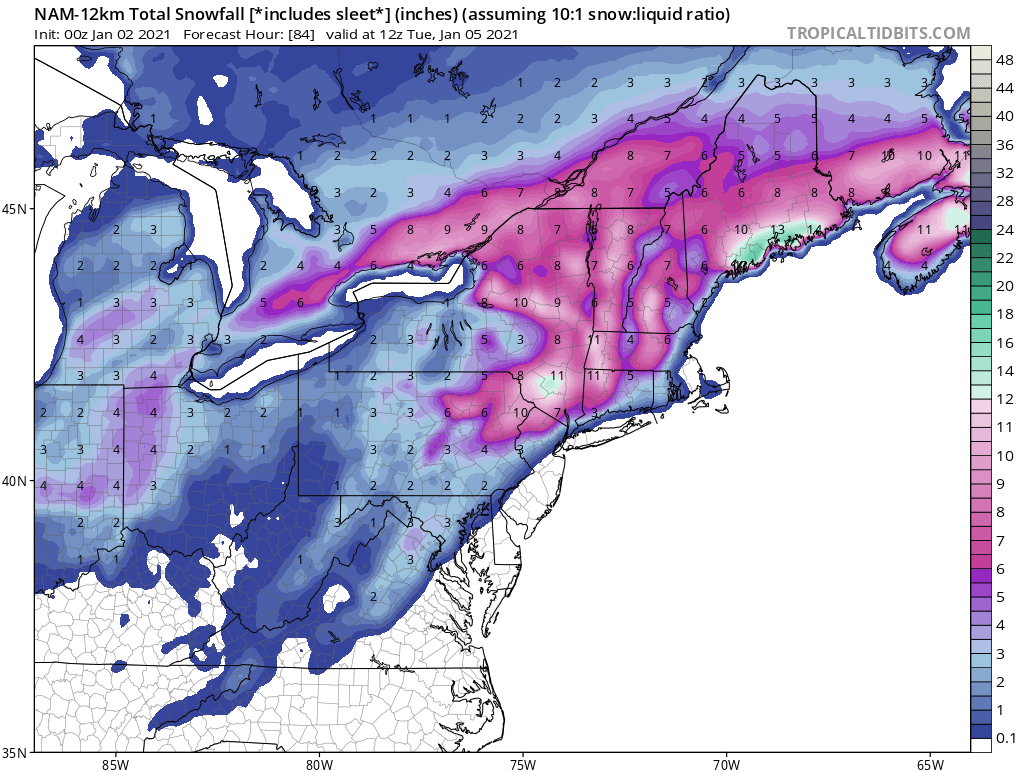 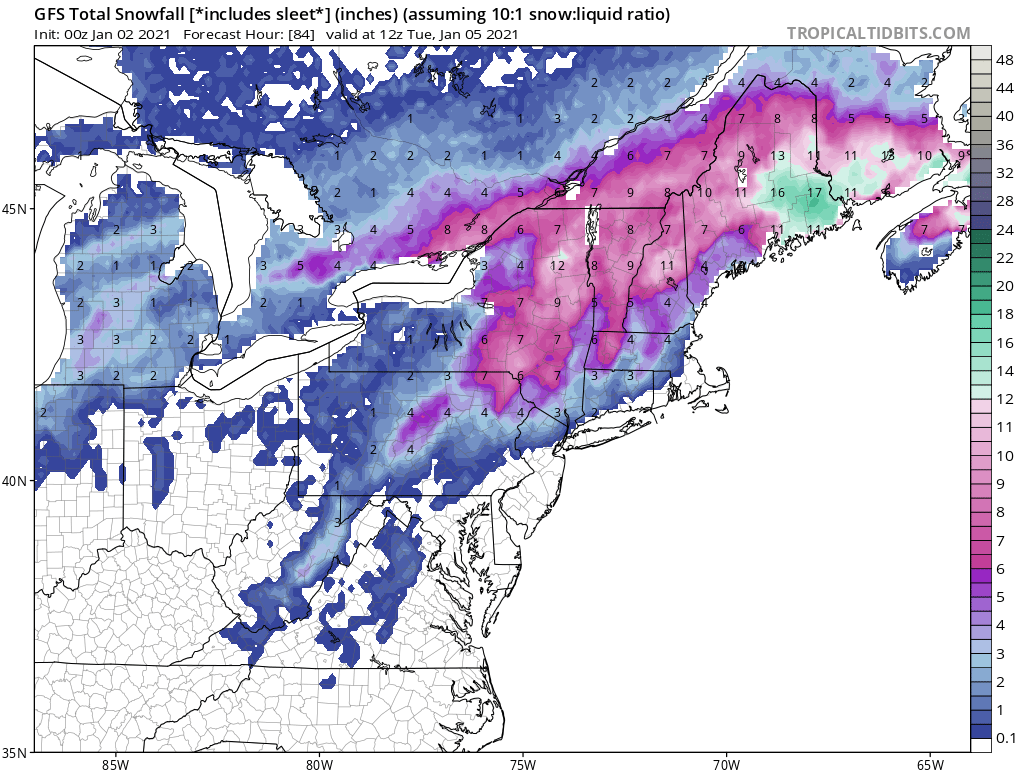 The mesoscale models are being very aggressive with the evolution of the storm thereby maturing it quickly.  The GFS and to some extent the Euro basically don't mature the storm until Gulf of Maine.  Mind you this is 48 hours out now with such differences.  If we get the kind of snow in the I84 that these mesoscale models are projecting then the GFS should be taken out back and shot.  No questions asked.   The Para GFS is 3-6 NW of 95.  I kind of like the Para solution but I'd shave off just an inch or so. 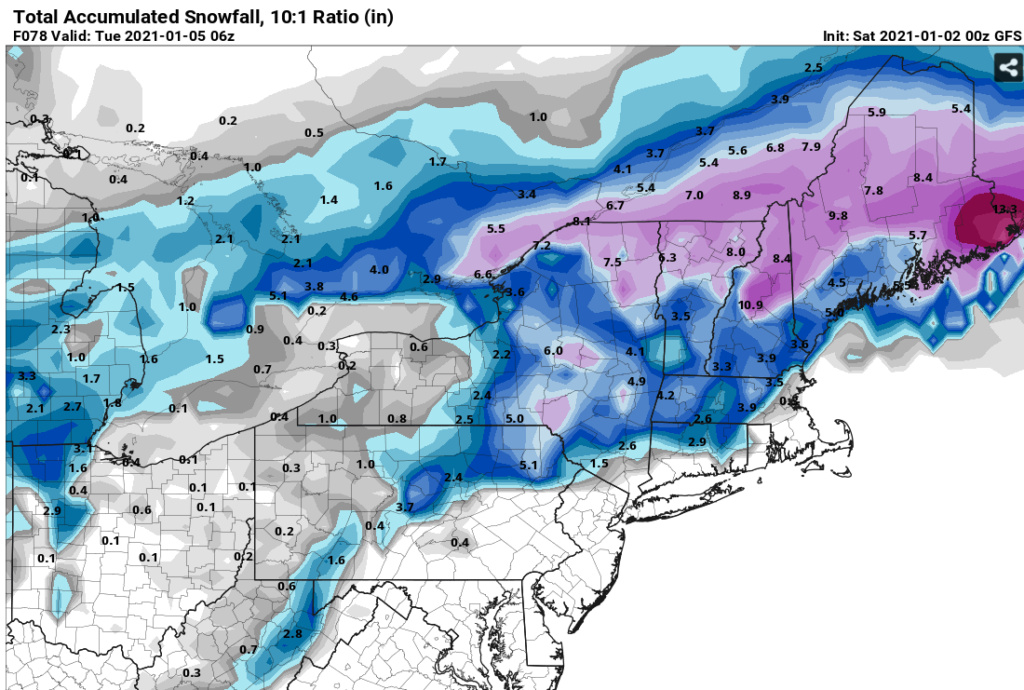 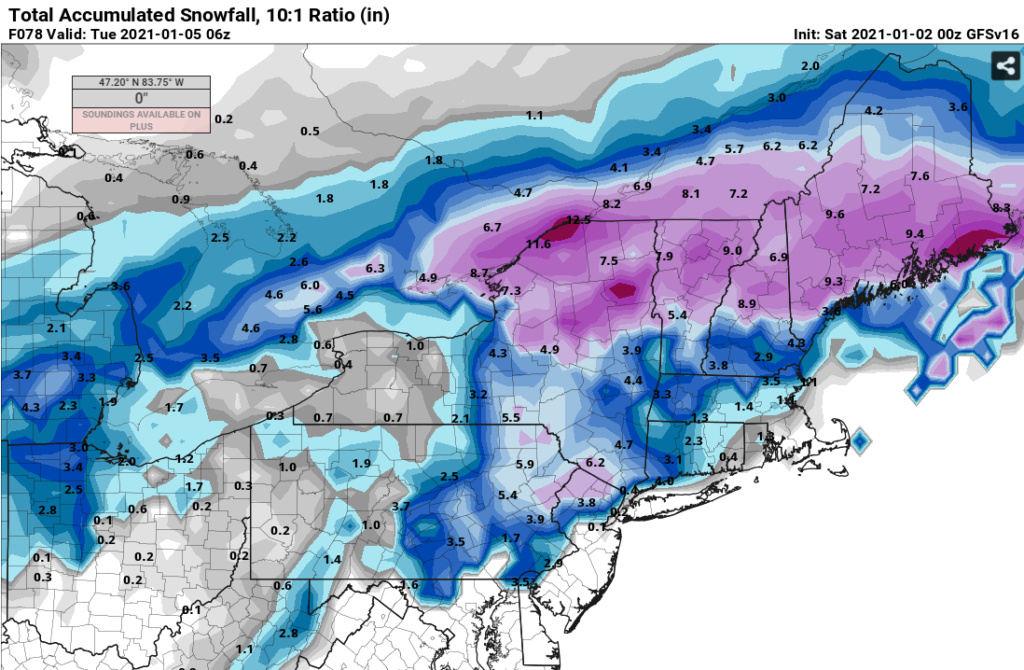 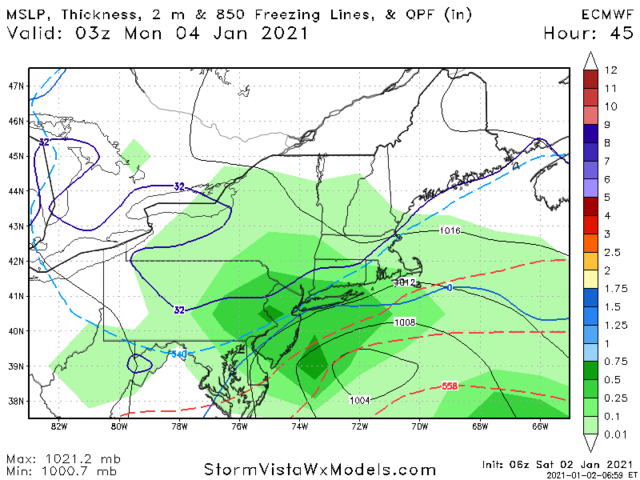 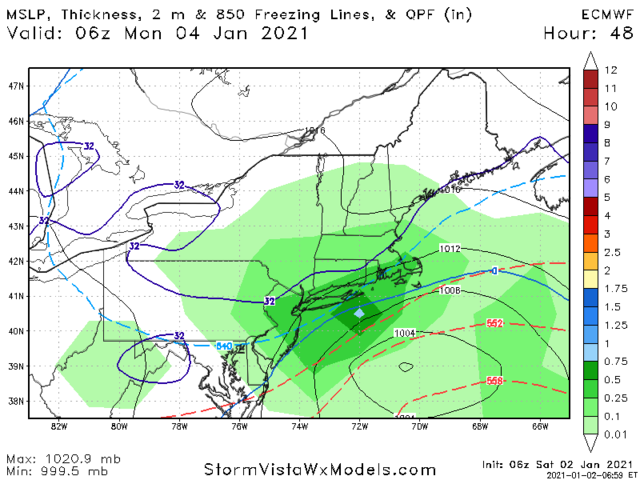 GFS is an I-84 and north storm while EURO/RGEM show heaviest accumulations south of there. NAM is a blend of all 3 which is what I’m currently predicting

Yeah it looks like the 850/925 mb lows are drifting east as it gets off the NJ coast. That probably is slightly colder solution and could have impacts for closer to the NYC area and LI as well as NW of 95. The further those lows stay to the south and east the less warm nose there is.

@Frank_Wx wrote:GFS is an I-84 and north storm while EURO/RGEM show heaviest accumulations south of there. NAM is a blend of all 3 which is what I’m currently predicting

The other thing I'm interested in is how long does this Low take to get to the 50/50 area?  The slower this departs the more south this Sunday system most likely will be.  The position of this low is nowhere near where the GFS had it only yesterday. It's much more south east which means there was a faster transfer from the primary to this. I feel the blocking affected it more than what was modeled only yesterday. 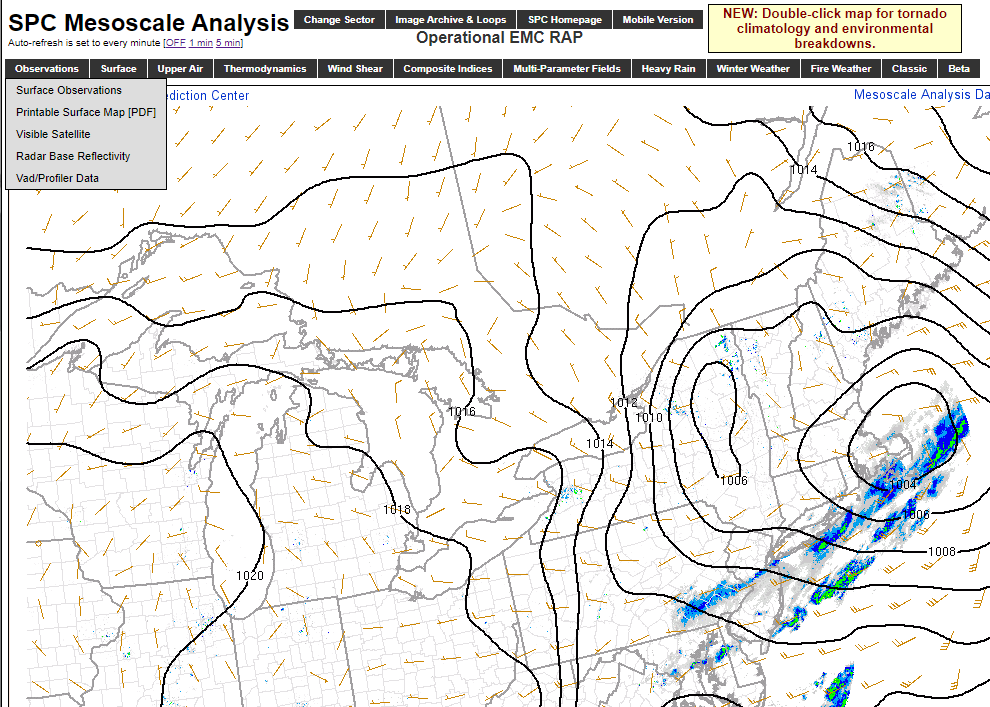 Another example of models under doing the extent of the -NAO. Maine has gone from being forecasted for flurries to a 6”+ snowstorm Monday night into Tuesday.

If I'm on LI North Shore I'm liking the 12Z Euro. I'm thinking those folks are going to do much better than 12/5 this go around.

White rain for some at the start then all snow

White rain for some at the start  then all snow

Yep. The warm nose will probably be lower this time more around 925's than on 12/17 where is was between 700 and 800. Definitely cannot underestimate the -NAO. We shall see, but if only we had some decent cold to work with it'd be a slam dunk because the track is favorable.

@heehaw453 wrote:If I'm on LI North Shore I'm liking the 12Z Euro.  I'm thinking those folks are going to do much better than 12/5 this go around.

Refer to my post from Mike Sullivan the other night about the NAO. We forget the power of this even when its transitioning because we've been head faked by it and become doubters.

Here's the departing storm reaching Nova Scotia where it'll produce 1' of snow away from immediate coast.  Interesting to see what it does w.r.t. blocking for the tomorrow. Also notice it will pull down just enough cold air for the interior. 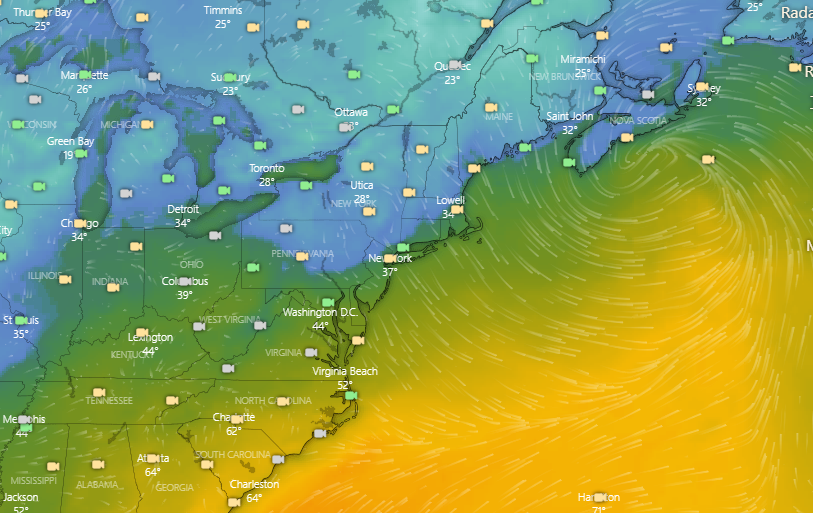 @sroc4 wrote:That pesky euro insists on snow down into MbY

The track of the H5 is very good for North Shore.  I also believe that area could be very pleasantly surprised with this.  The only reason we aren't more excited is the air mass quite honestly.

NYC may also get quite a surprise out of this.

@sroc4 wrote:That pesky euro insists on snow down into MbY

The track of the H5 is very good for North Shore.  I also believe that area could be very pleasantly surprised with this.  The only reason we aren't more excited is the air mass quite honestly.

NYC may also get quite a surprise out of this.

I was talking to Scott earlier how a few weeks ago when we had a coastal with marginal cold air we had flakes mixing in when winds went due north and sound temps were in the mid 50s. Now we have sound temps in the low 40s (around 42) and a bit better if an airmass to work with. Models have due north winds at the time of the heaviest Precip with the possible ccb band swinging through. That might be enough to thump. We will see.