@algae888 wrote:every model run from last nights 00z thru todays runs have shown a south push of the PV and the HP to our north. it continues on the 00z gfs and rgem. that is the main reason this storm is south. it's getting squashed by the HP. it's hard to believe that in march we had 2 storm south of us. usually that happens in January. I guess the -epo is to blame. it is strong this year and maybe to strong bringing bitter cold to us. maybe the models are overplaying the cold air I don't know but its just hard to believe its going to snow in Virginia and north Carolina again.

its not the HP, PD2 had a twice as strong high in the same location

0Z CMC does have moderate snow entering NYC and LI, but it takes a while to do so. And it doesn't get into this moderate snow band until about an hour after sunrise Monday, so it will be tough to fight to March sun angle. Also, after several hours, the snow ends, so not much in the way of accumulations here. 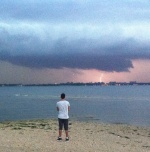 lol. well at least that post made me laugh, despite being HEARTBROKEN again.

@pdubz wrote:06z GFS is north by 75 miles but im going to act like nothing happened since chances of this reversing are slim to none

@pdubz wrote:06z GFS is north by 75 miles but im going to act like nothing happened since chances of this reversing are slim to none

That is actually QUITE a difference. Imagine if this becomes a trend for the GFS, what 12z may show...?

Yeah GFS did jump north a bit NYC still on the very edge. If it became a trend great but look at the NAM soon it will have it snowing in south carolina then florida by the time this thing gets going. A nice 6-12 for miami yeah now that would be funny.

Well folks I am afraid my biggest fears are coming to fruition.  If you have read any of my prev write ups my biggest fear was that the Euro's in between soln of a teaser track looks like it is coming to pass.  Without question there is now a general consensus on the overall setup.  Unfort it involves a missed phase, a pos tilted mini trough, a pos tilted ridge, and a PV.  Let me set this up with comparing last nights 00z Euro at 12z today with the one I posted at the very beginning of this thread which was the 00z Euro 00z from 2 days ago at the same time frame.
Euro 00z 3/13/14 : 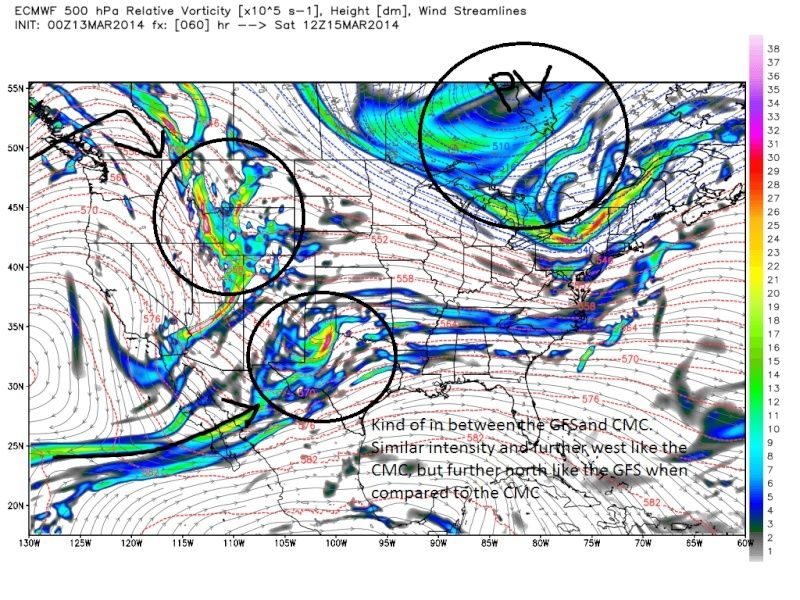 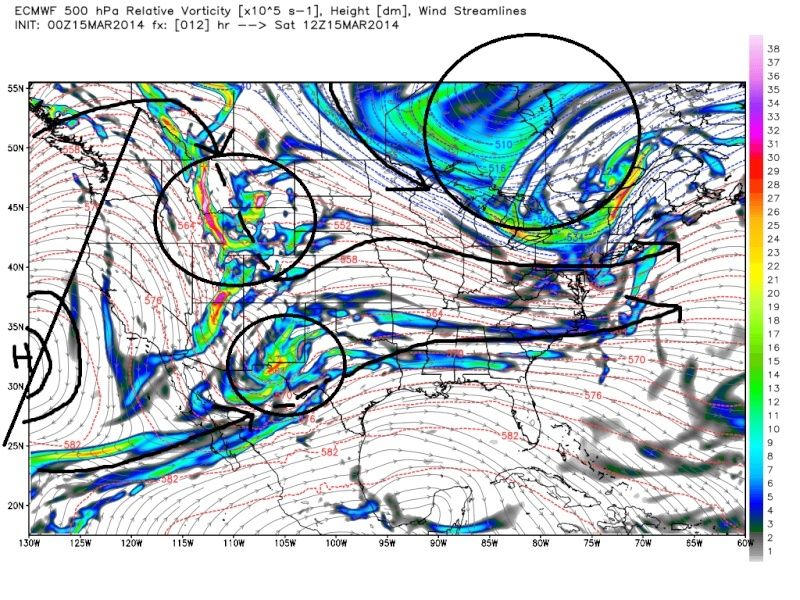 They look pretty similar with some slight differences.  Pay particular attention to the risge axis and where it is currently centered due west of So. Cal.   Now lets see what happens.  To do this lets look a little higher in the atmosphere ie: 300mb.  Notice there are essentially 3 jet streams here.  The Polar jet associated with the PV, the Pacific Jet, and the STJ (sub tropical Jet). 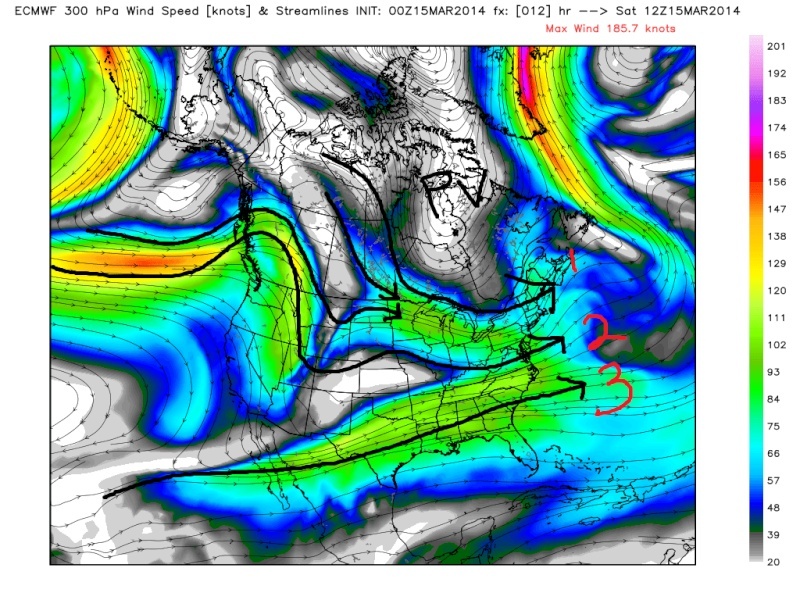 Now lets fast fwd 24hrs at 300mb 12z Sunday.  A few things happen here.  Now take notice of the ridge axis.  Tilted way positive, or SW to NE.  But why.  Two things happen.  There is a strong s/w coming in to the NW west which forces the ridge east, but the stubborn PV forces the pac jet to dig to the SW.  As a result the Pac jet phases with the STJ. 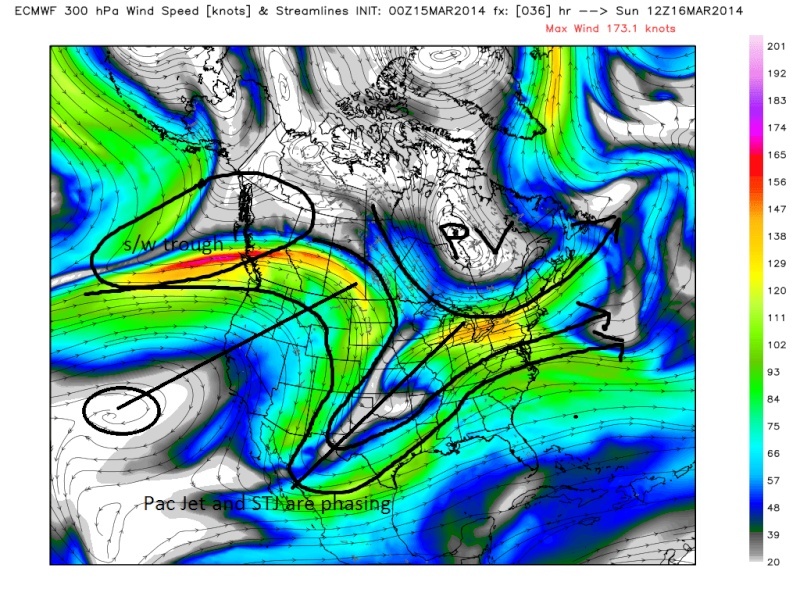 Because the axis if the ridge is so pos tilted the resulting trough digs in similarly out ahead of it.  We see this as holding back the energy at 500mb.  In reality it is the Northern piece of energy in the Pac Jet digging into the base of the trough because of the phase between the Pac jet and STJ.  The southern energy is allowed to escape east out ahead of all this because it has no blocking off the east coast to slow down its flow and begins to get sheared out.  Lets look at the same time frame, 12z Sunday at 500mb: 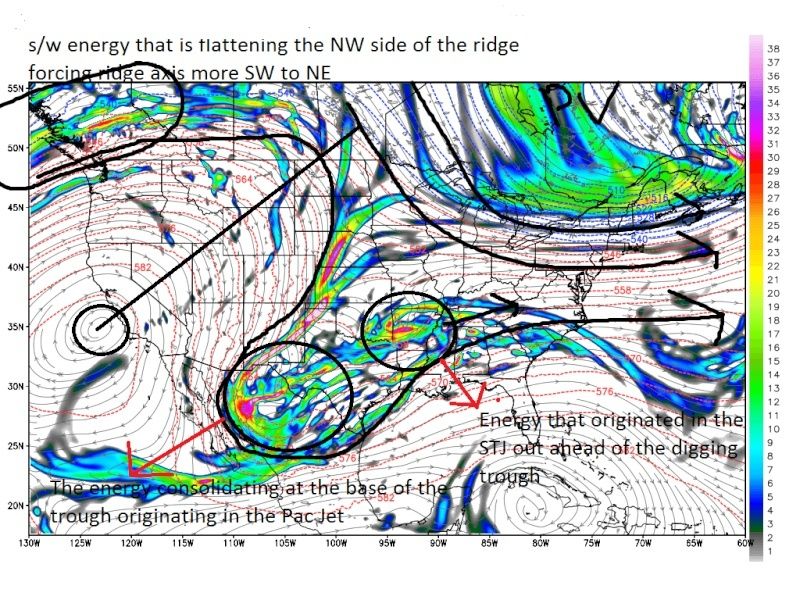 And finally 12z Monday.  It all starts to break down. The energy gets sheared out because the flow is so progressive out ahead of it due to the pos tilt to the trough. 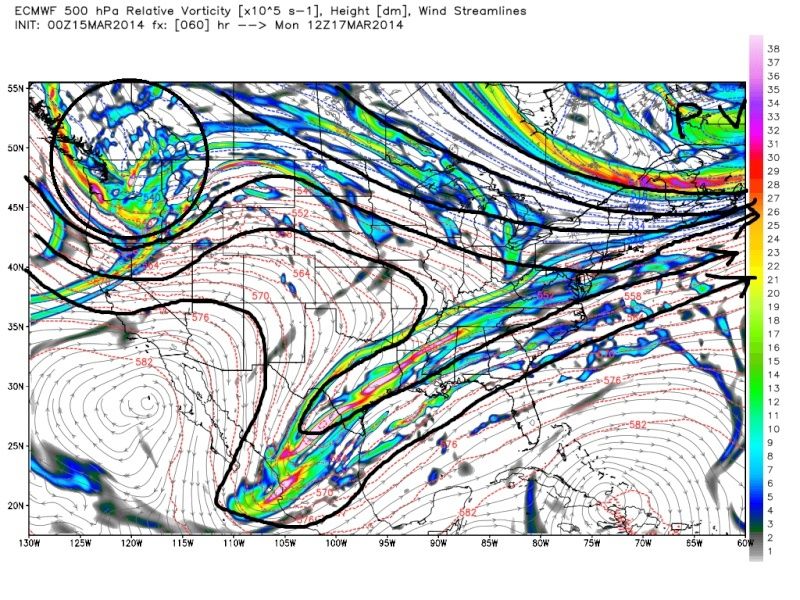 Great explanation Doc. It's always good to know why you're in pain even though there doesn't seem to be a cure on the horizon. What a royal scrooing this last 4 weeks has been. Granted I've had snow on the ground the last 2 months and I'm grateful for that but it's like we're being tortured for the 2 nice months of active snow we had. Very similar to the winter 3 years ago. Looks like killing the thread was to little to late. Thanks for all the great write ups. You frank tom and Ryan have made this the most enjoyable season yet. I am officially now throwing in the towel for all although up here in the HV I can't believe we won't have at least one more moderate event this season.

Was hoping tp break the 60 inch mark here Ace and I had a great season with snowfall . It was great winter in tracking and everyone on here is great with analysis and keeping people informed and I have learned so much my thing now is to make a decision on getting either storm vista or weather bell and whats the price for them? And is it good for someone who is learning about maps and stuff or is their alternatives?

@skinsfan1177 wrote:Was hoping tp break the 60 inch mark here Ace and I had a great season with snowfall . It was great winter in tracking and everyone on here is great with analysis and keeping people informed and I have learned so much my thing now is to make a decision on getting either storm vista or weather bell and whats the price for them? And is it good for someone who is learning about maps and stuff or is their alternatives?

We will break it with about a 1/4 inch of snow with this storm. Lets hope.
Skins, i pay Wxbell monthly, and its 19.99. I just charge it to my debit card. I dont know the price of Storm Vista, but i might invest in both next winter, but just keep wxbell over the Summer. Unsure yet. If you really want to see what everyone else is seeing and keep learning and interpreting the models better, and you want or can put the money, in, i guess why not.  Pay sites have much more tools than free, and its all in one place. But its really up to you if you want to shell out the money.
_________________
Ryan
Ph.D  Candidate at FSU
M.S. in Meteorology from FSU
B.S. in Meteorology from Plymouth State University

Thanks Ace appreciate the info yes I feel I need to learn more the only way is to get a paid site and see things for myself. Lets break 60

@skinsfan1177 wrote:Thanks Ace appreciate the info yes I feel I need to learn more the only way is to get a paid site and see things for myself. Lets break 60

Sroc,  a tremendously sad write up but nevertheless spot on as usual.  I will drink in my sorrow tonight thru mon. After the great screw job we got these last 4 weeks.

SROC. As always excellent description. Thanks for taking the time for such thorough analysis all season long. I guess it's time to welcome spring. Sadly. Well since the Mets don't look good for another year It may be a long summer.

This storm is done with, the ridge is breaking down due to that plains low and it's just progressive garbage. HP is in textbook spot but the flow is just causing it to shear out and head east. It will snow in the same exact areas that got hit in 3/3, climo says snow axis should shift from south to north as winter draws to a close but doesn't mean anything in reality. After this storm the cold air shuts off and a spring pattern takes hold, so their snow won't be around much anyway and they missed out on all the storms earlier in the season we cashed in on. Overall was a pretty good winter.