Yes mugs your 100% right, the CMC shows yet again another coastal spin off i nthe 10 day, maybe even two so I am not buy into it until it happens. Quite a swatch of rain coming up from south though, but looks to just miss us. 91L has a high chance of development in 5 day, GFS has it strong and recorving aroudn burmuda and Euro keeps it very weak and further south getting it closer to US. That is the one that I am most interested in seeing what it does.

Okayyyyy, talk about CMC going a bit nutty developingneverything it possibly can jeeze, have not seen a run like this before that I can remember LOL. 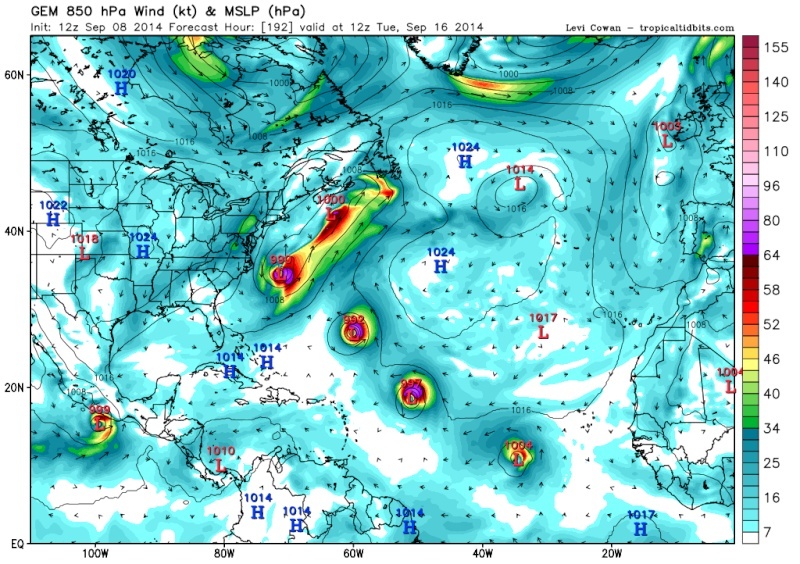 There is alot of talk on tropics forms about 91L and the fact that its going to bee-line through central atlantic toward the midatlantic/north east but recurve, just depends where. Could it make it here? Doubtful, but possible, didnt Gloria have a similar path, but I think its def something we need to a keep an eye on especially since the models take this close to a cat 3. Still wayyy to early to speculate if and once it develops all the models could and probably will change.

CMC is on crack jman! If that ever occurs my god the hcan weenies will be going bezerk!

@jmanley32 wrote:Okayyyyy, talk about CMC going a bit nutty developingneverything it possibly can jeeze, have not seen a run like this before that I can remember LOL.

That's fun to look at

Yes I am aware the CMC is on crack it was a FYE posting. Just never seen such a perfect lineup of cyclones like that on a model before, just doesn't make any sense.

We may have something to watch the week of September 15th (next week). Guidance is insisting on a tropical cyclone getting relatively close to the east coast. Track is still uncertain, however, as this could also be a threat to the Gulf coast. I'll have to look at this more closely tonight and possibly write up a blog, though I may hold off until Friday when more information will be available

HEY! This is my job lol, at least I get to post the 12z, a bit concerning but its the GEM, do you actually think it could be right? GFS has similar but 300+ hrs, any other models support? Thats a beastly storm, if it were to come to frutation, hybrid at that point? 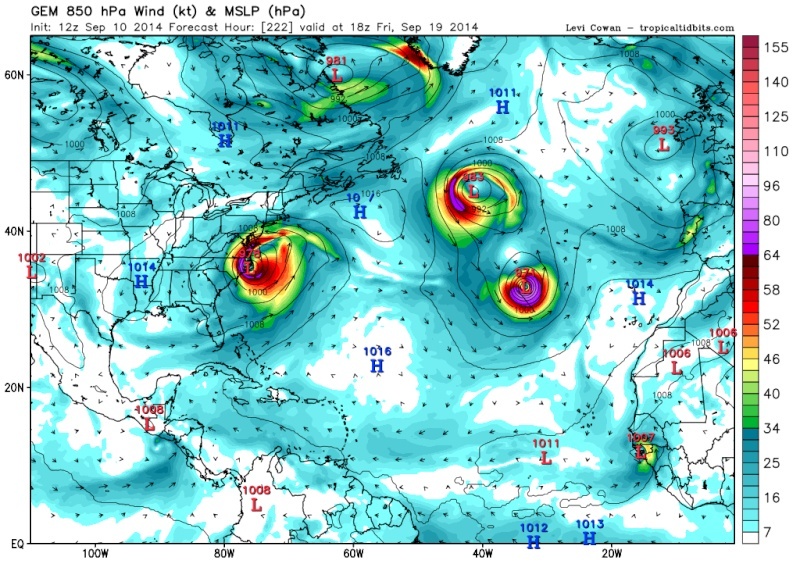 GEM 12z 240hrs, if this is at all on target we may be in trouble. Frank BTW nice new pic! Don't we all pretty much agree the GEM is hyper with low development, and in this run it goes into GOM looks like its going to hit gulf coast does a hairpin turn crosses northern FL again and up East Coast. Hummm....

As for 91L still has 70% chance of development, I don't see it but in either repsect will just be a fish storm, nothing to support it getting even close to the US. Frank a blog explanation would be awesome for the tropics. 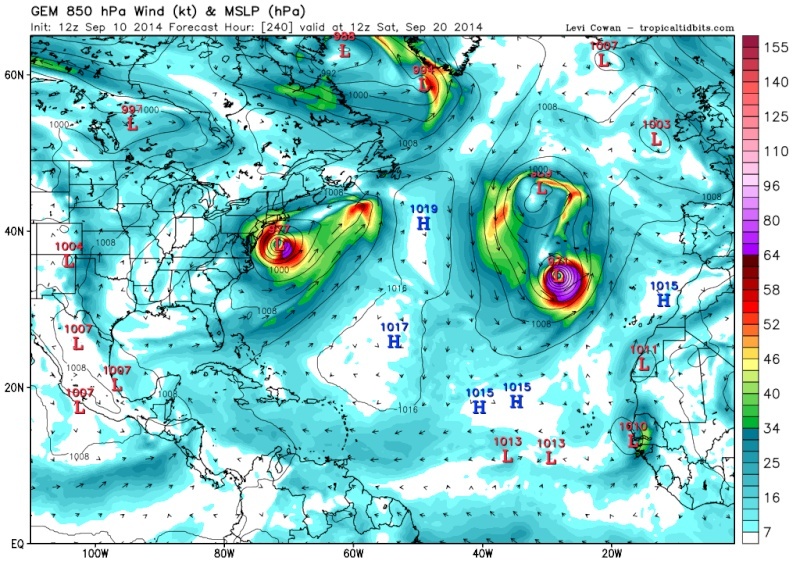 @jmanley32 wrote:HEY! This is my job lol, at least I get to post the 12z, a bit concerning but its the GEM, do you actually think it could be right?  GFS has similar but 300+ hrs, any other models support?  Thats a beastly storm, if it were to come to frutation, hybrid at that point?

I like to steal peoples thunder, what can I say.

Kidding aside, I do think this threat carries some merit compared to the rest of the "threats" of this season. GFS today at 12z around 222 hours has one system coming out of the Gulf and another emerging out of the Atlantic. I do think 1 or both of these systems have to be watched closely, because if one does not pan out the other may have a strong chance to make landfall somewhere in the U.S.

Oh yeah I saw that on GFS but timing is very different as is placement.  I will keep you posted (as will you with your expertise) although things have been mega busy as to why I didn't catch it before ya : ) and BTW some less reliable long range sources errrmm the farmers almanac is calling for a midatlantic landfall around that time frame or into the following weekend. Watch for sure, IMO the wave soon to come off africa will get a x and do you think the x east of FL now has anything to do with the CMC run off EC?

I just looked at 00z GEM again and it is the low over bahamas that crosses FL then turns back east (what causes that) and heads up EC to the eventual spot you posted image on.

We have 92L off FL east coast, all model sgetti agree on a cross over into GOM and then like CMC a hookback, so maybe the CMC is not out to lunch. Frank I think this may be the one we need to watch. What are your thoughts, I won't expect a respons right away since you said you needed to look more into it.

recon going out tomorrow 11am. i bet 8pm nhc update they up the chances of development. it really has started to come together fast.

I found this interesting, best analog tracks for 92L (btw is up to 20/30) all have come up here, but not crossing FL. Yet it isn't pointed in that direction, so how is this map tabulated? 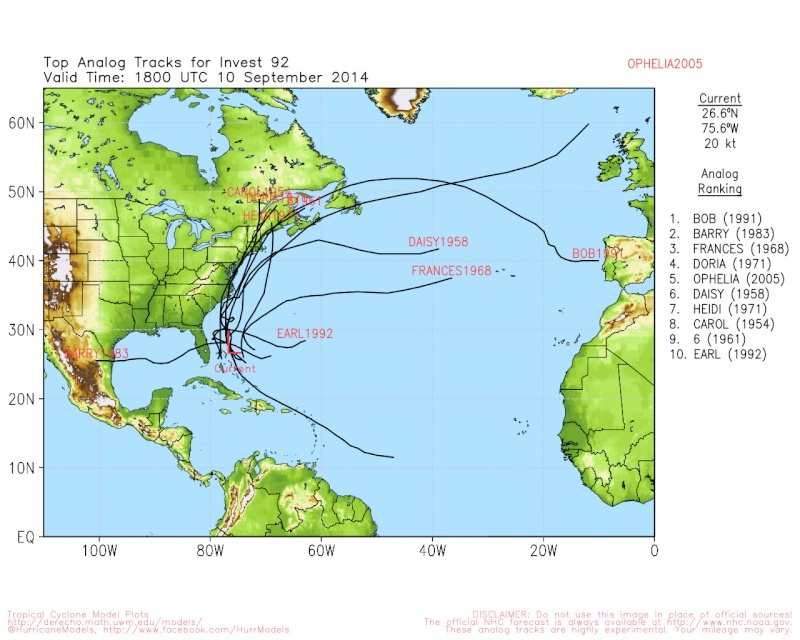 2. Shower activity associated with a weak low pressure area near the
northwestern Bahamas is currently poorly organized, and the Air
Force Reserve Hurricane Hunter mission scheduled for today has been
canceled. Upper-level winds are forecast to become unfavorable for
significant development while the low moves slowly westward or
west-southwestward toward southern Florida. Regardless of
development, this low will bring locally heavy rains to portions of
southern Florida and the Florida Keys during the next couple of
days.
* Formation chance through 48 hours...low...20 percent.
* Formation chance through 5 days...medium...30 percent.

from NHC. plus CMC lost the storm and it had no support from any other model. what a quiet season! still no major hurricanes. btw the 00z gfs has a few coastal lows riding up the coast past 200hrs but I do not think those are hurricanes or hybrids. look like typical noreasters. if they develop. anyway cant wait till this thread is done. why? cause then we BRING IN THE COLD AND SNOW!!lol

Yep, I am about done with this season too, its been boriung, you know its boring when the chatroom I am in for tropical wx has had barely anyone in it, even the mods. Yeah as of 92L I think it will could surprise once its in the gulf so I wouldnt take your eyes off it especially donw there. And algae you know as well as me that models lose and regain solutions all the time, especially the nutty CMC. Still wondering what Frank thougts are though. Snowstorms and noreasters are def on my mind : )

CMC back with the rapid development and loop back to FL, so Frank I think you are right in not writing this off quite yet. SO far CMC is up to here. BUT GFS really has nothing, and I am betting that Euro will also not show much. 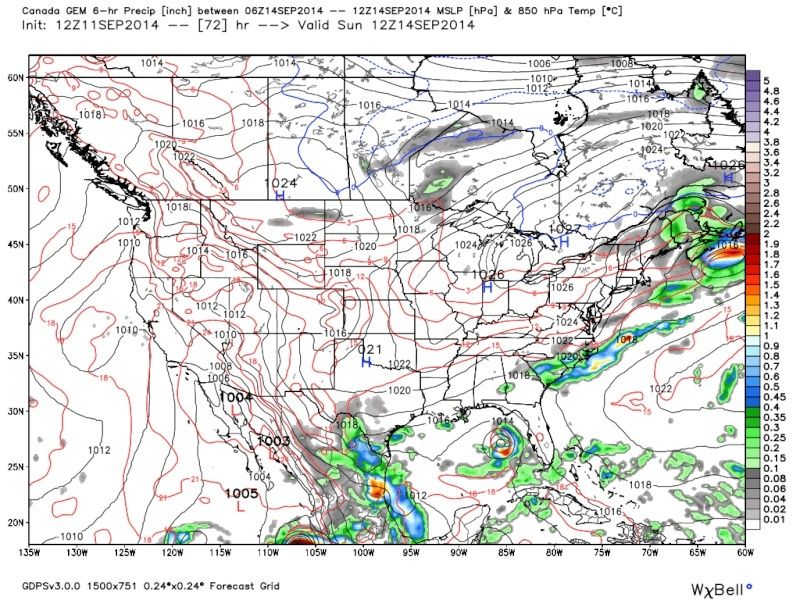 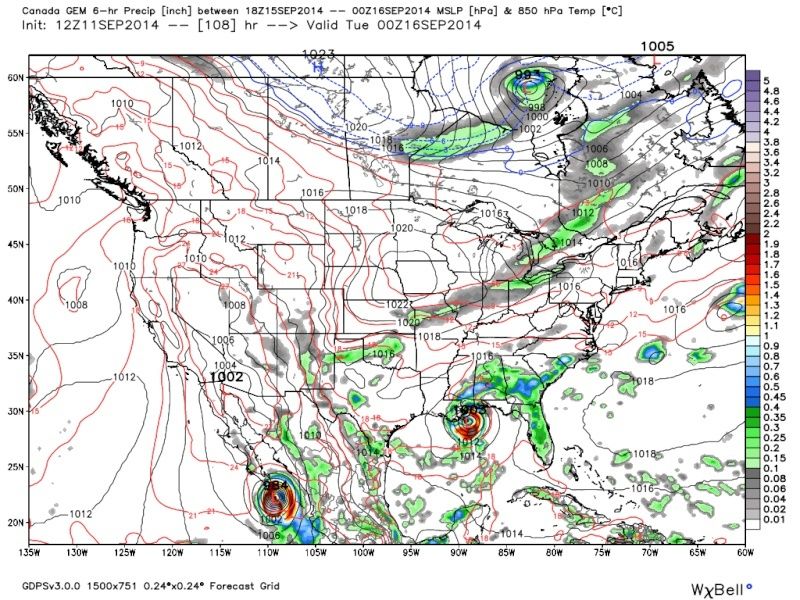 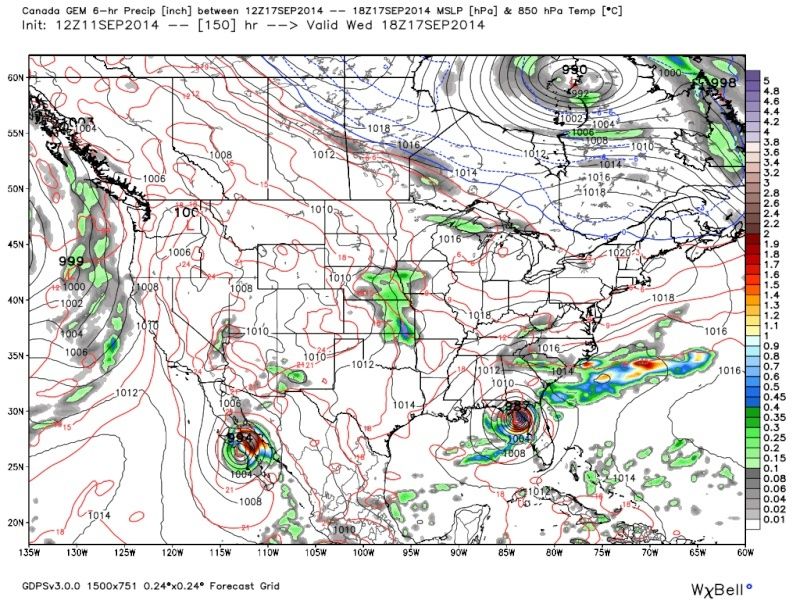 And then from there its OTS, of course we know little at this point, if this thing will do what it shows in GOM and that hairpin turn. 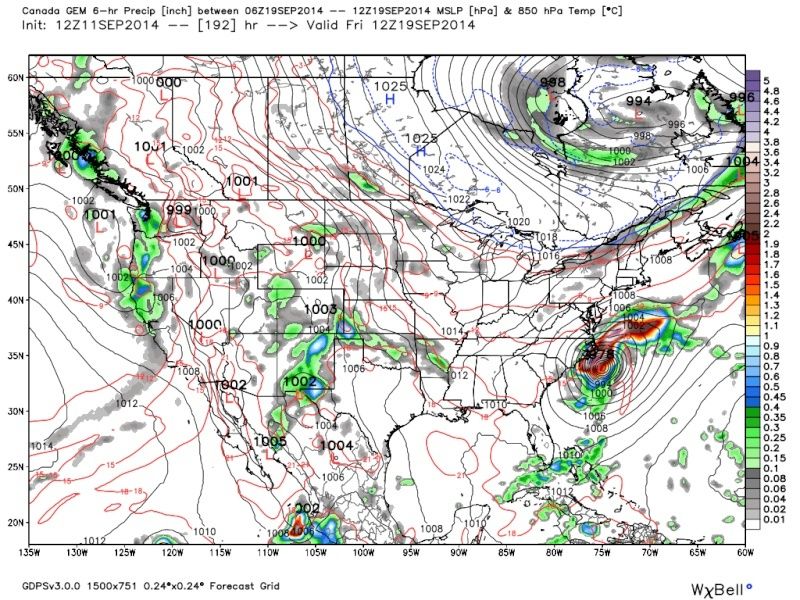 Shower activity associated with a low pressure area near the
northwestern Bahamas has become more concentrated today, and the
circulation of the low has become a little better defined. Some
additional development could occur before upper-level winds become
less conducive tonight. The low is expected to move generally
westward across the southern Florida Peninsula into the eastern Gulf
of Mexico during the next couple of days. Regardless of
development, this low will bring locally heavy rains to portions of
southern Florida and the Florida Keys during the next couple of
days.
* Formation chance through 48 hours...medium...30 percent.
* Formation chance through 5 days...medium...30 percent.


And we also have TD 6 way out in the atlantic progged to become our 4th hurricane but affect no one, slight chance Burmuda but doubt it.

So Frank what are your thoughts on 92L and 93L? Mainly 92L as CMC still shows it turning around and shooting up the east coast. But later than next week now.

@jmanley32 wrote:So Frank what are your thoughts on 92L and 93L?  Mainly 92L as CMC still shows it turning around and shooting up the east coast.  But later than next week now.

J man I am only slightly intrigued by this threat.  I hope by now you have come to the conclusion that the CMC has an extreme bias to over do EVERY piece of energy involving tropical system threats.  This particular threat you are referring to does have a small amt of merit though as it seems the Euro and GFS are trying to organize some energy off the SE coast with a well positioned HP to the north.   The problem is this.  The CMC has this thing spun up pretty tight already as is crosses the Fla Panhandle by 00z Friday which until proven otherwise is wrong.  So why does the CMC bring it up the coast whereas the other models do not?
CMC 00z Friday 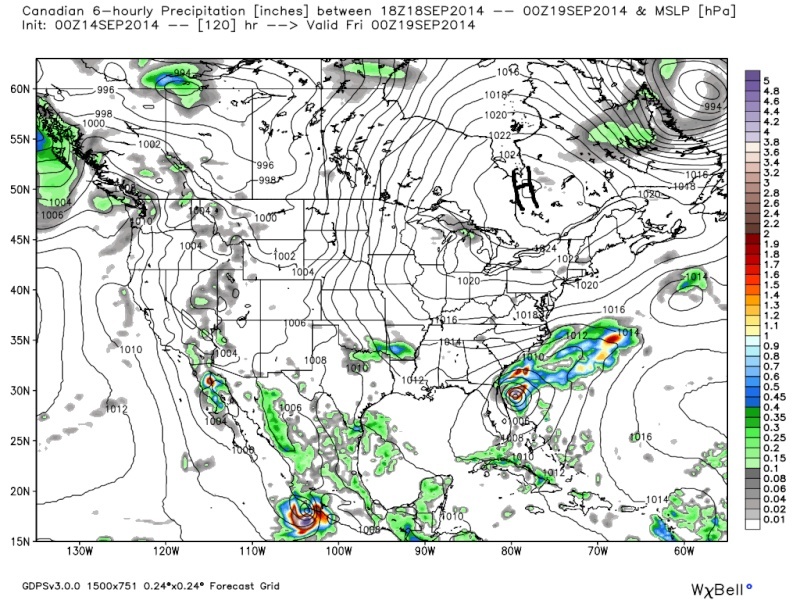 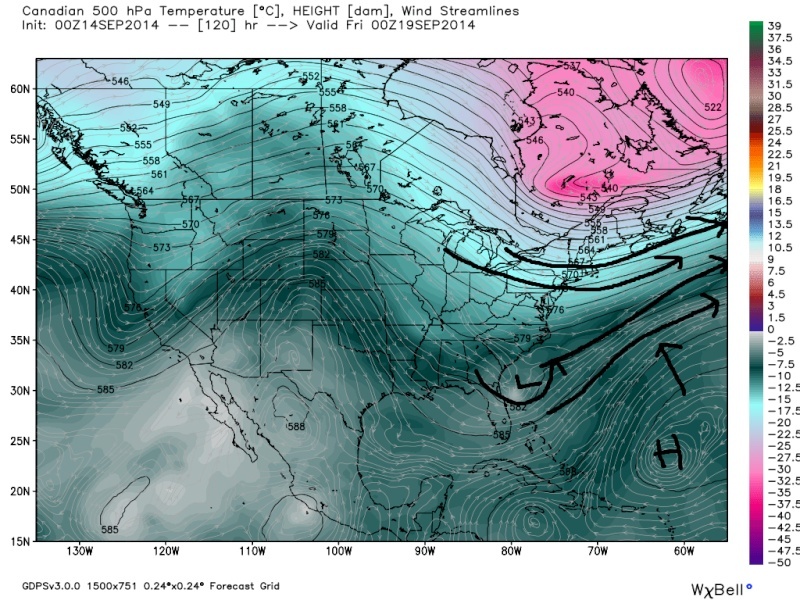 " />
If this system were to come off Fla that strong the strength of the system would actually aid in pumping the Atlantic ridge raising heights out ahead of it much quicker which would aid in steering it N instead of shearing it out to the NE.  As it slowly drifts north it eventually gets captured by a trough(as seen by the CMC only) moving across the great Lakes and actually retrogrades it slightly before the trough sweeps through and it eventually turns it NE. 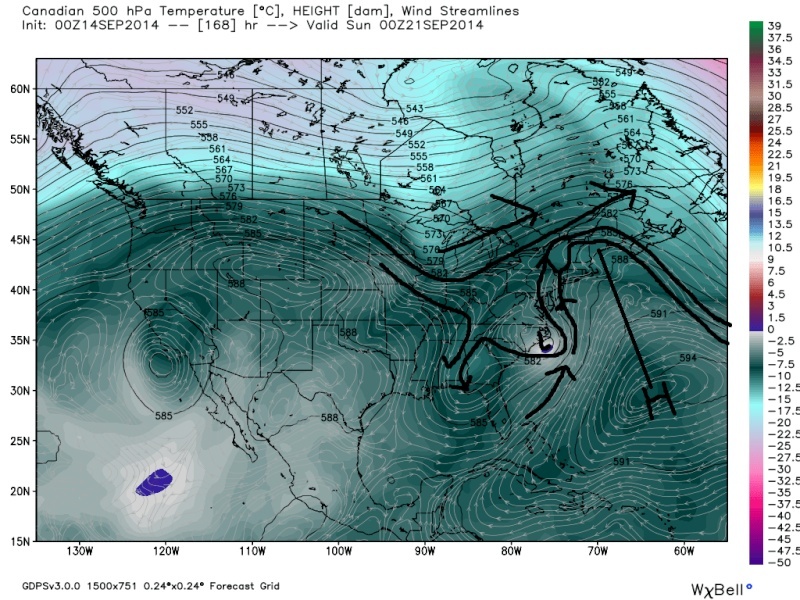 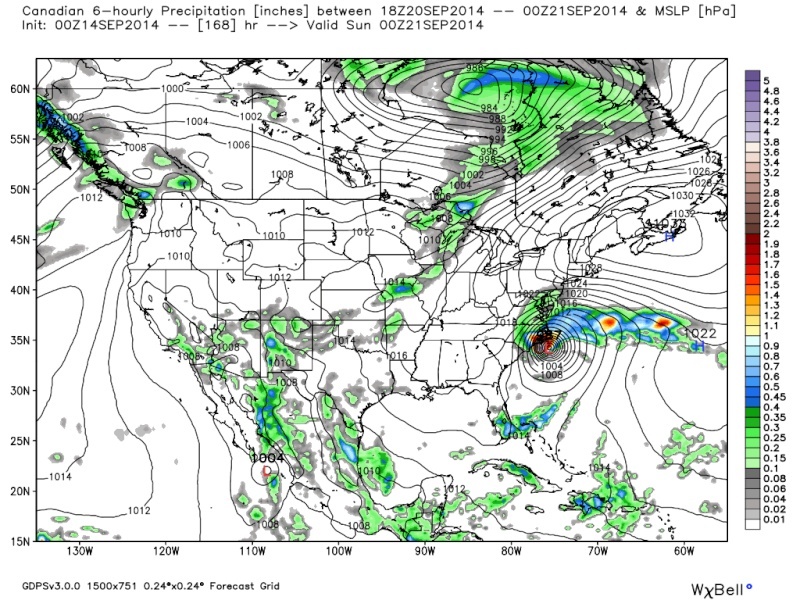 
The Euro and GFS however have a disorganized broad area of LP coming off the Fla Panhandle.  As a result the energy has a tough time consolidating because the heights out ahead of the system never really increase to the N like seen above on the CMC and the wind flow remains to the NE shearing the system apart until the trough moves off the East coast and away she goes. 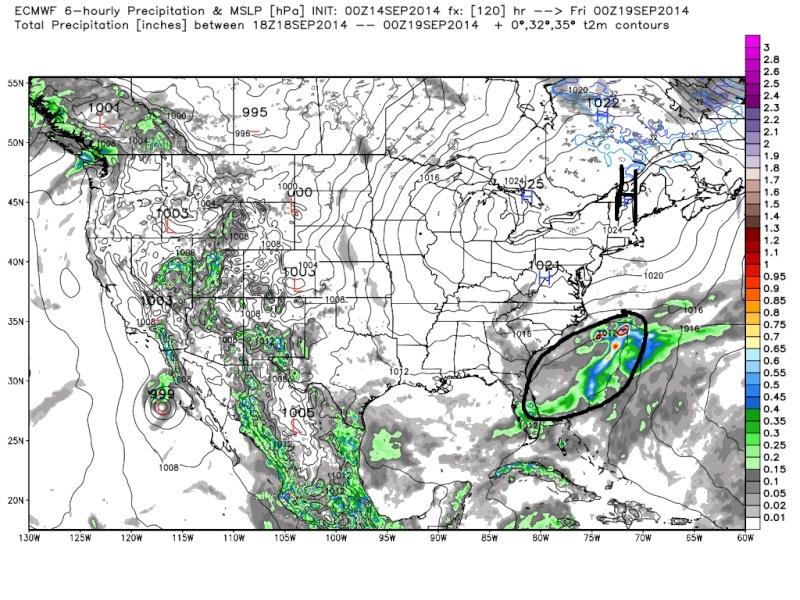 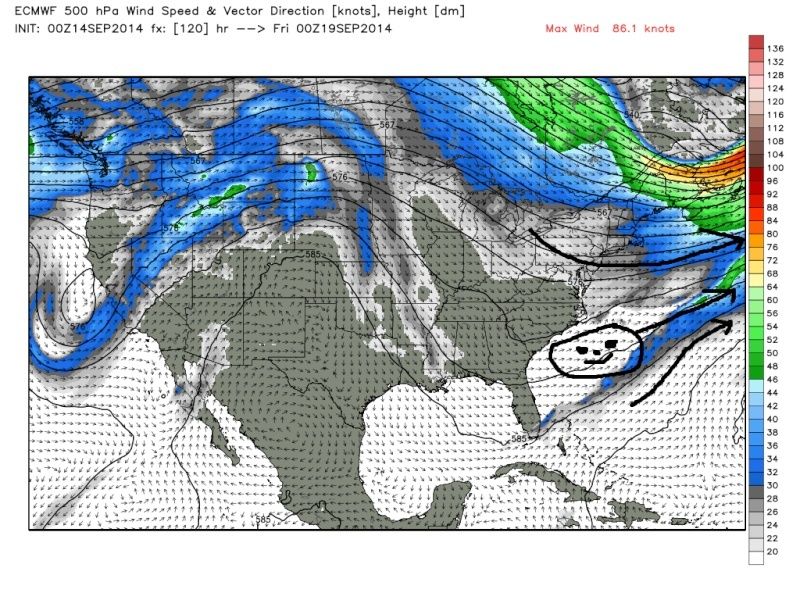 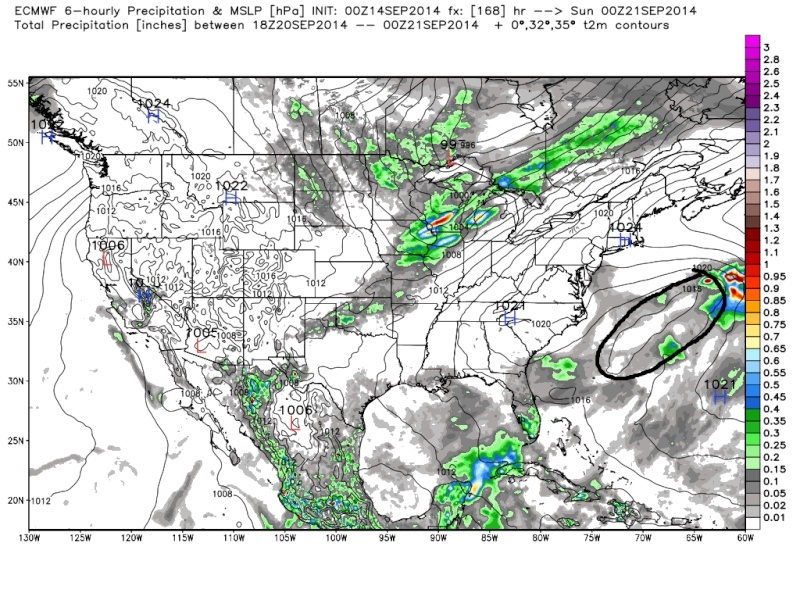 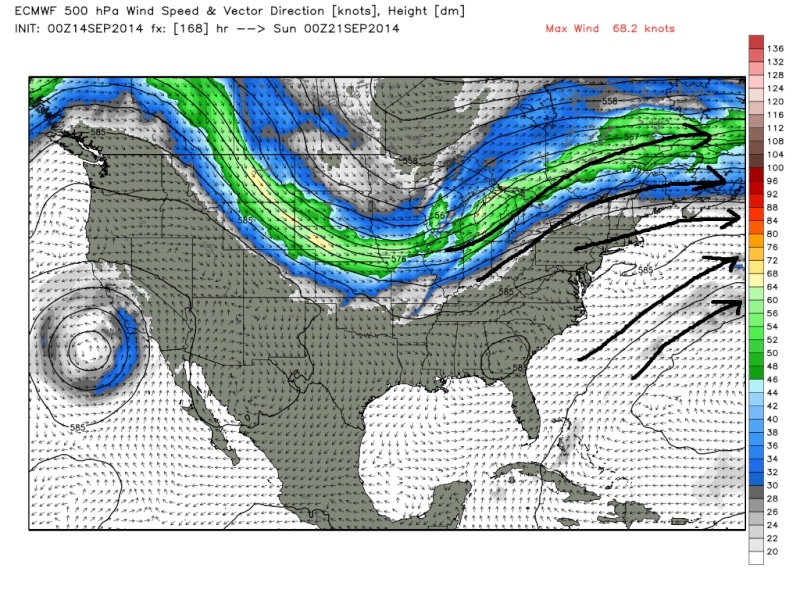 We ae going to need the heights to increase out ahead of the system as it pushes off the SE coast sooner than is currently modeled on the Euro and GFS. I personally doubt that happens, but as you can see the Euro is trying to do this, but it does so to late. 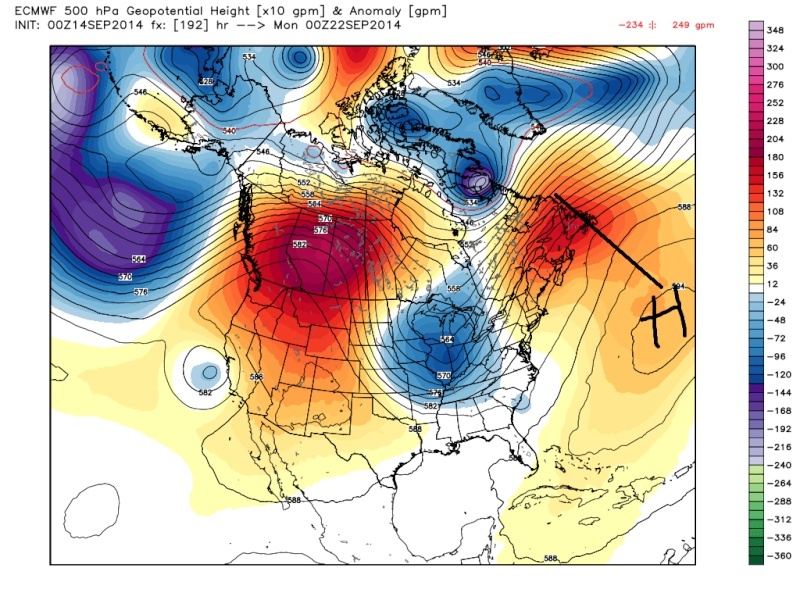 The one thing that is consistent on all the models; however, is a nice HP sitting over the NE US/SE Canada on Friday by 00z (see surface maps above both Euro and CMC).  This is one key for development of the system as it exits the SE coast.  However, an important difference I see as to why the CMC is so much stronger with the system then the Euro/GFS by 00z Friday as it comes off the Fla coast can be seen at the 250-300MB level in the atmosphere.  There is a much stronger Jet streak that is centered further S and W on the CMC when compared to the Euro.  This creates strong divergence aloft.  When there is air racing away in the upper levels to the N and E of a system like this (we can also see this with potent Nor Easters in the winter) that creates a void in the atmosphere.  This promotes rising air to the SW of the Jet Streak to replace the void in the upper levels of the atmosphere created by the streak; thus enhancing surface LP development. 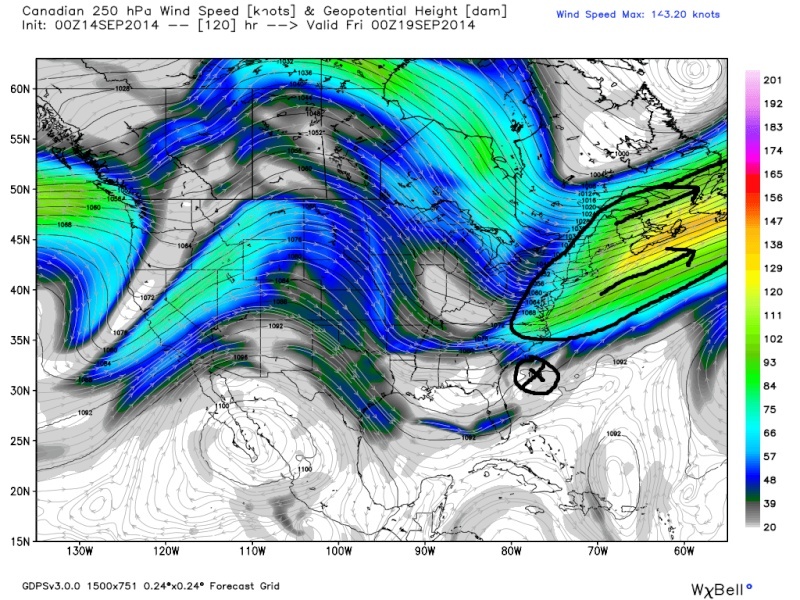 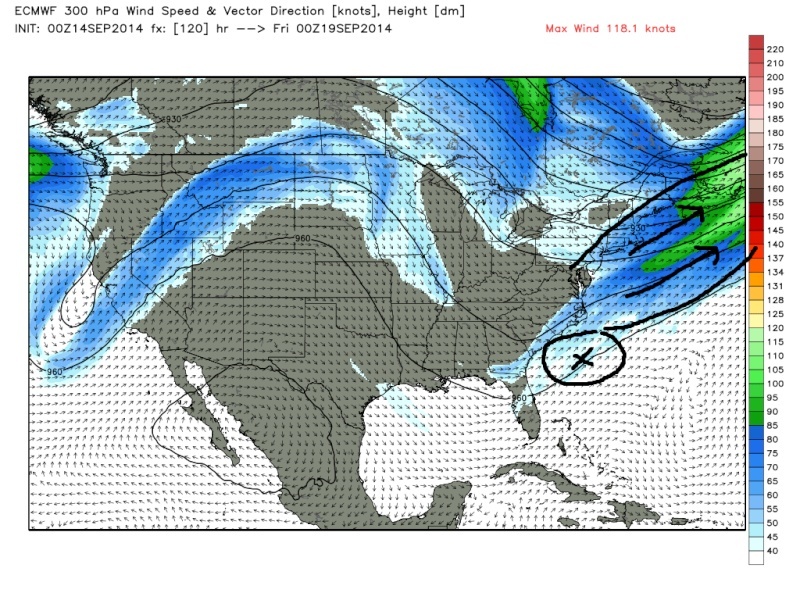