Zipppp! Gone, lets see if it comes back CMC now shoing something off Yucatan, but the models seem to just be giving off false developments.

GFS and GEM are back on board with some sort of weak development in Caribbean that eventually moves up coast around 5-9th, what I am others are talk about (on another site) is why does it strengthen up the east coast when the waters are colder, is this another possible hybrid-like type situation or attachment to a front?  It def comes out of the Caribbean though.  GEM blows it up into a small cyclone into panhandle where GFS keeps it a broad area of low pressure that crosses central FL.  I think at the least its going to be a enhanced rainfall event, GEM 192 hr rainfall totals are crazy in south pushing 10-15 inches. Of course that is our aggressive model, GFS has caribbean soaked but not a obvious track of a storm.  BTW how do you embed more than one photo into one post?  When I click it a second time I do not see how to clear the first one. 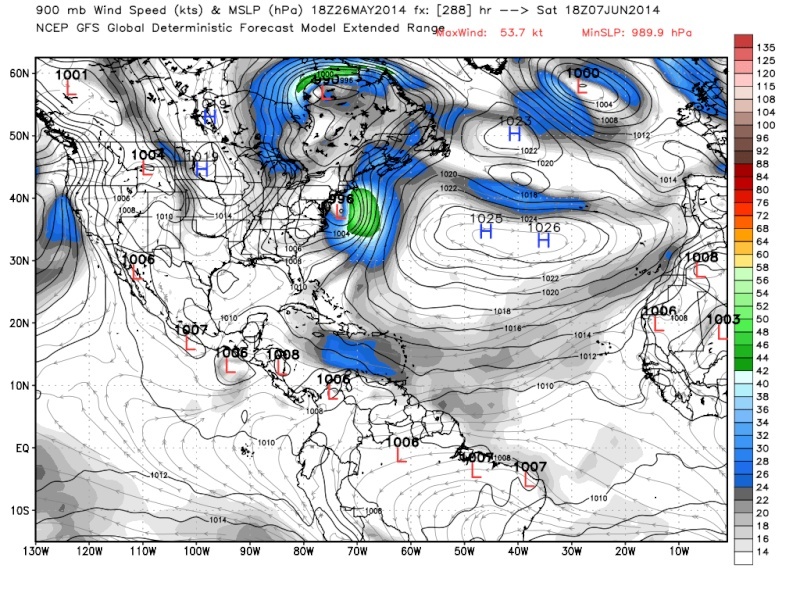 GFS rainfall, it actually does have a fairly obvious trail on enhanced rainfall. But for 384 hrs thats not that much rain except for FL. 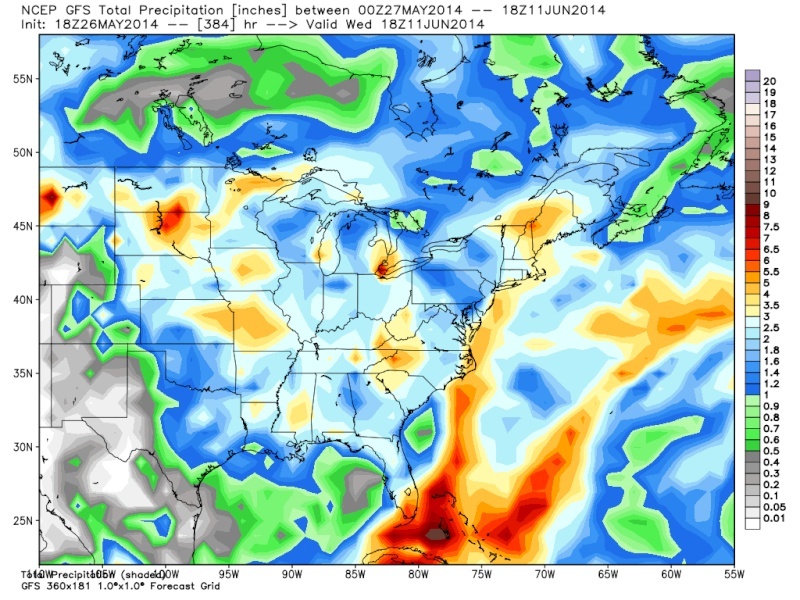 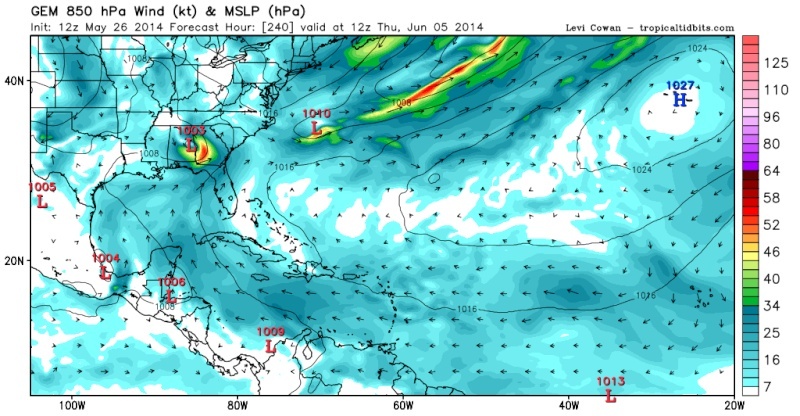 storm goes into panhandle and drops a heck of a lot of rain. Of course I do as well as everyone else understands this is way out and a lot is going to change but there are signals for a while now of something trying to come together. You can also see its turn back towards the Atlantic after crossing Georgia. 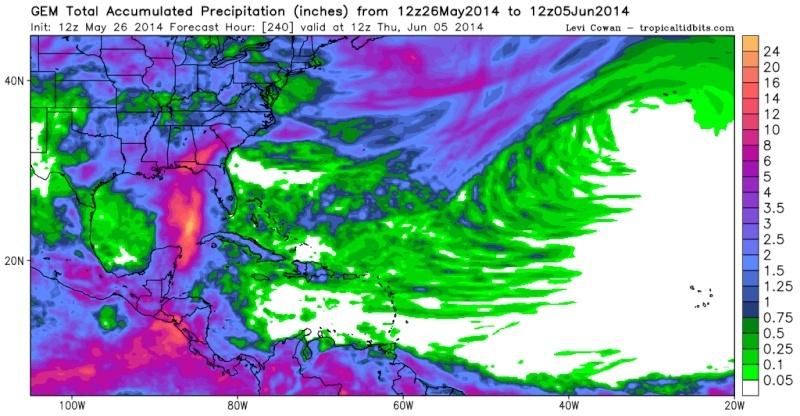 I know what we all think about JB however I think this is a very good read and makes some sense. The waters are ripe off our coast and I think his fears are somewhat justifiable. Just an opinion, we will see. Read the bottom comments some of these people are really into this stuff and do not care about anyone!

@jmanley32 wrote:I know what we all think about JB however I think this is a very good read and makes some sense.  The waters are ripe off our coast and I think his fears are somewhat justifiable.  Just an opinion, we will see.  Read the bottom comments some of these people are really into this stuff and do not care about anyone!

You are very right, the temp anomolies are quite high, and I wonder if they may continue to increase as the summer heats up. Not a good thing as anything tropical won't weaken as much if something comes up the coast.

Dunzoo, IMO we could have arthur next week. And what amazes me even more even though its in fantay land it has it increase in strength up east coast to 990 right over us. At the very least I think this could be a potentially double digit rainfall with serious flooding. IMO, alot will change, looks of tracking to do.

Well 12z GFS certainly wants to give us a TS or a strong remnant low, lowest pressure of the run though. Will have to keep watching as its way out. 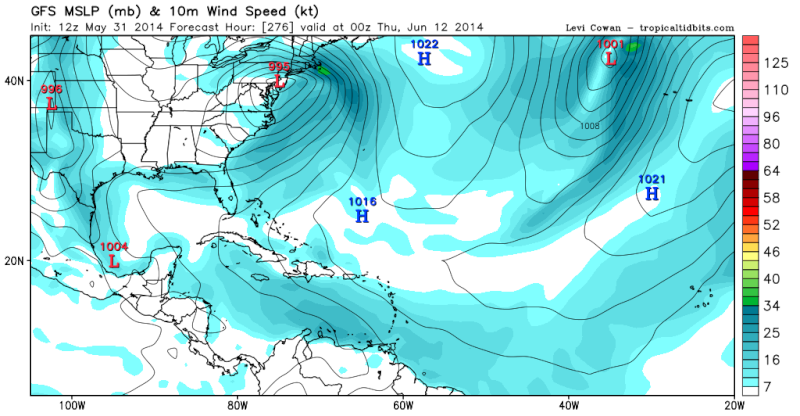 We may have a off senario if Boris from pacific holds its name into GOM we could have Boris instead of Arthur up the coast. And it increases in intensity when it gets up here, lets see if that holds, BTW Frank CMC is totally opposite now In fact Euro is more in line with GFS. 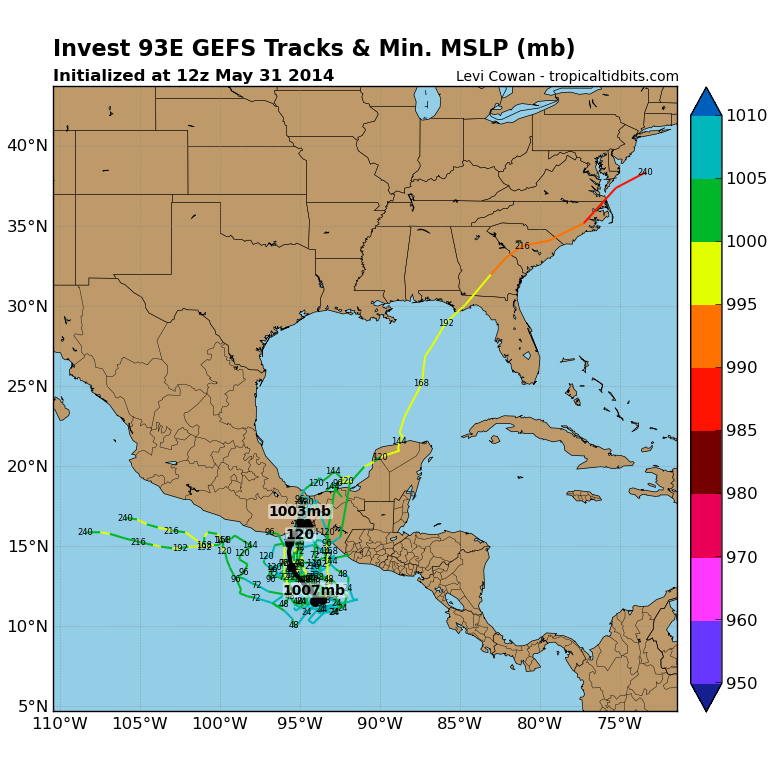 Well I have the euro at wxbell so if you want me to post any images just let me know which ones.

looks like there will be some type of tropical system in the gulf heading towards s/w florida early next week. however it looks like it will head well out to sea and spare the east coast.

Algae there is a big high over atlantic I have yet to see a model that sends it OTS.. But they have abcked off today, Nothing to really see probably for next 5 days.

Looks like 90L MAY be a TD for a very short period of time before making landfall in Mexico. Goes to show you how much the models can have trouble, GFS was way off for a gazillion runs, any ideas why? Is this a view of the future tropical season with the models? Looks like there nay be something going on in the next 15 days but who knows way to far out to tell. Only thing I do know is if you believe in the farmers almanac they are calling for a hurricane weakening into a TS up this way starting further south. Just stated as a threat but will be interesting if there is even any kind of development at all. I hope it can hold off on the 28th its my birthday and we are going to see iLuminate in Manhattan. If you have not heard of them check them out, they are amazing.

I was overlooking the GEFS runs for 18z, haven't had time to view other runs but in the very long range a few of the 20 GEF runs show a formidable hurricane or hybrid hitting the area. This would also coincide with the Farmers almanac time frame of a tropical threat to us around late June. I can post images but it is hard to decide which one since each hour of stamps varies quite a bit being so far out. Def something to watch. The FIM seems to agree with a FL hit and EC run, I dont buy the GFS with 3 landfalls along GOM, total throwaway.

Please don't give me the you know its to far out and throw it all away, lol. I know its far out and highly unreliable I was just interested that the GEFS were quite in line with each other for the 18z and its in the time frame of the almanac. I have no clue just like anyone else what will happen in 15 days but I know I will keep watch no matter what.

FIM is liking the idea, how is this model BTW? Is it still experimental? 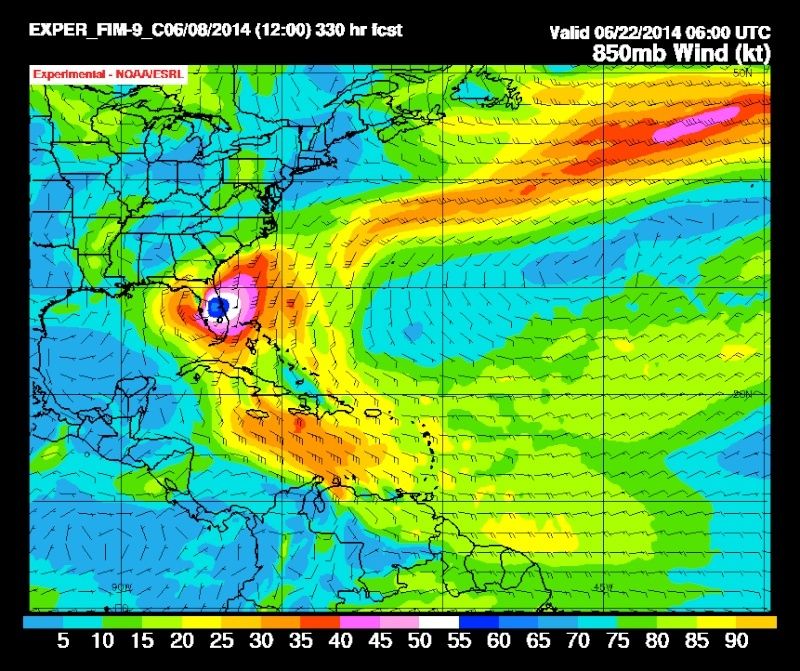 NWS thinking there may be a development off southeast, Euro is showing this and eventual track up the east coast, strengthens? Can someone explain to me how this would happen, the favorable area ends around the carolinas but as depicted below it goes from nearly nothing to a TS weak hurricane off cape cod, something to watch IMO, I know you all will probably feel otherwise but since the Euro, CMC and to some extent to GFS is showing it, I am at least watching.

For the North Atlantic...Caribbean Sea and the Gulf of Mexico:

An area of low pressure could form off of the southeastern coast of
the United States by late this weekend or early next week. Some
development of this system is possible if it remains over water
while it drifts southward or southwestward.
* Formation chance through 48 hours...low...near 0 percent.
* Formation chance through 5 days...low...20 percent.

Below is the start of it it actually starts to fester around FL, not sure if this is the same thing the NWS is talking about or a different development, I can see the very weak low moving south in the 5 day on Euro but it then seems to turn into this. Yes yes I know its 10days out, I don't need to be told this lol. BUT it is the Europ and stranger things have happened. Nothing else to talk about in this section so since its from the NHC discussion I thought i'd post it. 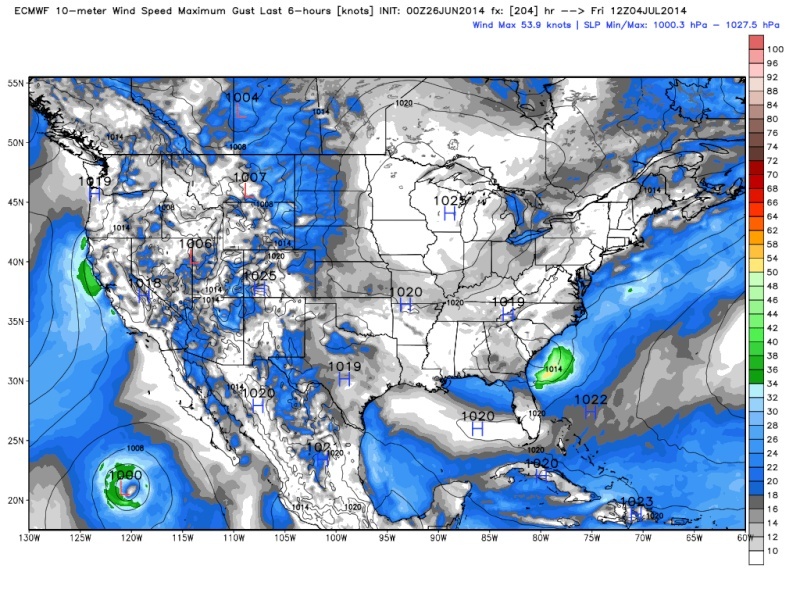 240hr Euro, Not sure if it is the same entity turned around from going south or something different.  Is there a way to tell if a storm on the model runs is cold core or tropical in nature? I know algae mentioned this was cold core when I posted the run several days ago but this comes from way down by FL, which would make it at least tropical at the start. Doesn't appear that any other model shows this entitiy, what does it mean when the Euro is on its own? I know the CMC has bias to overdo lows and the GFS has just been wack this year but the Euro has shown little until now. 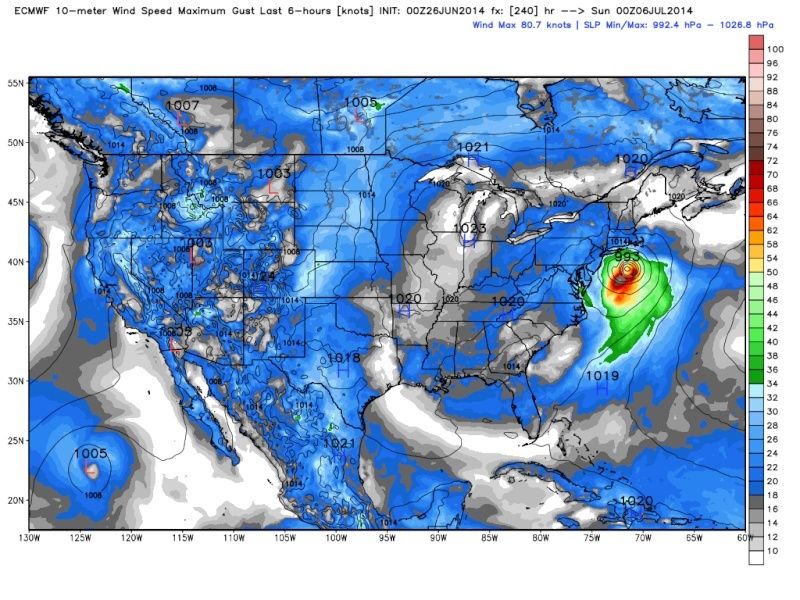 Euro didn't lose this development at 12z although looks more frontal, ukmet says TS formation around 96 hrs and other models are hinting at a development too. Of course now the GFS is being sheepish lol. Will be interesting to see what happens, people are saying we could have Arthur by the end of the weekend. Compared to Ana and Bob in 1991. Hopefully not another Bob, well at least for me I was in CT and it was bad.

Well 91L has formed and from what I understand is going to meander to the south for a few days then move north and how far east depends on the high, blocking and trough. The Euro blows this thing up like crazy last night to a 985mb hurricane off carolinas and then 968mb far off from us but the 12z brought it almost over us after landfall in carolinas and has a weak TS by the time it makes it up this way. I think this is one to watch although as of now the speghetti models take it off carolinas and OTS but if indeed it develops into Arther (which there seems to be a consensus it will) the model tracks will change, always seems to happen once something fully develops. Also the fact that its not really moving the steering currents are so weak right now its a big guess as to where exactly it goes by the weekend. Nonetheless I think its something we need to a keep a eye on.

Thanks for keeping an eye out jman and it will be interesting to see what 91L will do.
Here are the spaghetti model run for this - things look to be interesting coming the July 4th time frame - I am out of here July 3rd!!