Is it just me, or does Steve D's winter outlook sounds a lot like 1996 as far as snow potential goes? I recall that year was a weak LA Nina, but the end result would be the same. When there's the possibility of ALL THE TELECONNECTIONS working in our favor, that definitely raises an eyebrow. The problem is, if it sounds too good to be true, it probably is. Don't get me wrong, I think we will have a very good winter, but I feel he might be over the top with his forecast.

@Frank_Wx wrote:Continuing on...now I'm at where he speaks about the Atlantic SSTs...he says a -AMO (below normal SSTs south of Greenland) leads to blocking (-NAO). I never recall reading that and he doesn't really prove it or show analogs to support it. Strange to me that cold water gives off a feedback for positive heights in the atmosphere.

Again, he is smart and has good explanations but some of this is questionable. Lots of words. Little examples.

Hey Frank I found this image in a discussion given by Joe D'Aleo in 2008.  You prob already know this but as the discussion notes warm AMO phase tends to be linked with a predominantly neg NAO in winter; whereas, a cold AMO phase leads to a predominantly pos NAO.  Steve D; however, notes that we seem to be transitioning in the Atlantic from a warm to a cold phase.  As this map illustrates the transition state seems to sustain the neg NAO.  The map Steve D showed on page 67 of his write up of the current SSTA indicates a warm, cold, warm pattern from N to south in the Atlantic which looks pretty similar to the years 1964-1969 1970-1974, which clearly had a sustained neg NAO. 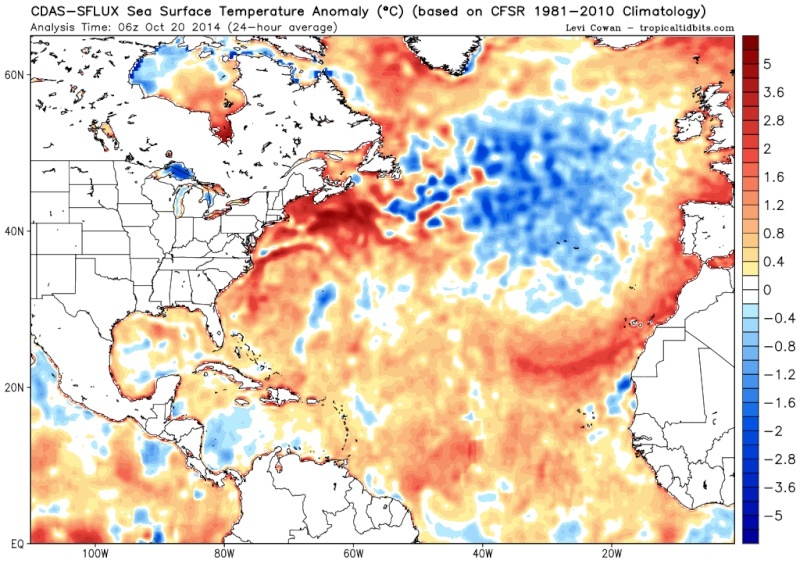 Thank you Doc. What I gathered from the link is the AMO and NAO/AO have an inverse relationship. Meaning, if the AMO is negative then the NAO is usually positive. If the AMO is positive, the NAO is usually negative. Like you said, 1964-1974 represented just that since those years transitioned from warm to cold phase AMO.

Hare is the same for NAO:

DT's winter outlook, haha some of it is funny

And for those who are curious...yes...cold / above normal precip once again on the east coast. So that is both Steve D and DT in one day.

I wonder what that idiot Frank_Wx is going to predict?

In case you missed it last night

Accuweather restates their position of not as cold as last year.Paul Pastelok calling for mixing in winter storms for the I 95 corridor and east while west of I 95 gets blasted.OK, that's on the record now.

Accuweather restates their position of not as cold as last year.Paul Pastelok calling for mixing in winter storms for the I 95 corridor and east while west of I 95 gets blasted.OK, that's on the record now.

I'll be keeping my fingers crossed that it turns out that way Doc.

I just don't see it Pastelok's way.Look at this storm we are having now.The Jersey Shore gets pounded precip wise while we are in the dry zone.This has been the trend the last five years.Gonna take a lot to break that whatever is causing it.

Maybe this is the year for us, we'll see soon enough.

We shall see nothing in stone yet

Here's an interesting tidbit to keep in mind… several years back while in a weather chatroom, a well respected met once said if you want to know the primary tracks of noreasters during the winter, just follow the tracks during october and november. He said barring a major pattern flip, coastal storms that track a certain way during the fall, more often than not repeat over the winter. If you use this logic with the storms that we've had thus far, that bodes very well for us.

When john (earthlight) calls for a blockbuster winter, that raises a lot of attention.

I'm more convinced then ever that we could be in store for a memorable winter!

When john (earthlight) calls for a blockbuster winter, that raises a lot of attention.

I'm more convinced then ever that we could be in store for a memorable winter!

Last night at 11:00pm Kathy Orr on KYW 3 in Philly gave her Winter Outlook. Her feeling is that December will have average temps and precip. January and February are a different story. She's calling for below average temps and above average precip. She feels that we won't have as many snow events, but as she put it there will be a few barn burners. Tonight the ABC station in Philly will be giving their Winter Outlook at 11:00pm. Can't wait to see your Winter Outlook Frank, us Snow Weenie's are frothing at the mouth with anticipation.

Went to see Jim Witt's Winter predictions and presentation - he is an awesome Met - retired now but still awesome. Janet and Greg where there as well from this board.
Interesting take on the winter - he uses a lot of analog days and dates for his predictions and uses planetary alignments - sun,moon, saturn and mercury. His students who were part of his weather club at the school he taught at so many years ago have become some of the biggest and best mets in the world!!

He feels the following
Weak El nino, +PDO, High Lattitude Blocking (-NAO) and _Ao (read between teh lines on this one) = East coast storm track - as he said not every stormis going to impact us here but theones that do whe believes will be bigger than last years meoscale type snows.
Now this is for NYC and we have a large area of folks on this board

December is an average month temps wise with just above average precip and snowfall.

Feb. Normal temps to just below normal (.-5) to average precip

Again he uses planetary alignment and patterns from this and showed us analogs that he used to predict these events from 30,40 and 50 years ago - same alignment

I always enjoy his presentations and on a side note he is calling for not one but 2 major east hurricanes next September and showed us the analog maps from 1936 - same set up in our universe.

Interesting - if Janet and Greg have anything else of if I misinterpreted something he presented please by all means post.

Exciting time ahead and again he said not a little storms like we had but decent to major size ones - WEAK El Nino winter - used 1977,1994 for the January analog months plus others that I missed - if this verifies I'll we retain my

Glad you posted this mugs, I don't have too much time lately, but I will add that he does expect most of the storminess in January and February, which personally is when I like it! December is too busy without having to add in getting around in the snow, although I will take a White Christmas...
_________________
Janet

Mugs how did jim do last year in his outlook and also in the previous years? thanks chris

I watch the ABC station in Phiily's Winter Outlook last night and she basically said the same thing as the woman on the CBS station. Her feeling was that there won't be as many snow events as last year, but the storms we do get will dump substantial amounts of snow. But she did say that along the coast snow totals would be lower due to mixing issues. Sorry SNJ, but us North and West folks need to get some of the totals you guys received last season. lol !