Good call JMan. Currently still huge spread however in the models in how this plays out. Euro has been hinting at this, so my ears are def raised. Euro is trying to phase N and S stream energy. Its much stronger with the N energy. GFS has a weaker northern piece and holds back some of the southern energy; therefore, misses the phase. And the CMC is trying to phase the energy too late and OTS and is faster with the Southern energy. Timing and intensity still need to be ironed out with the diff pieces. I am leaning towards the Euro as of now.
Euro 00z Tues: 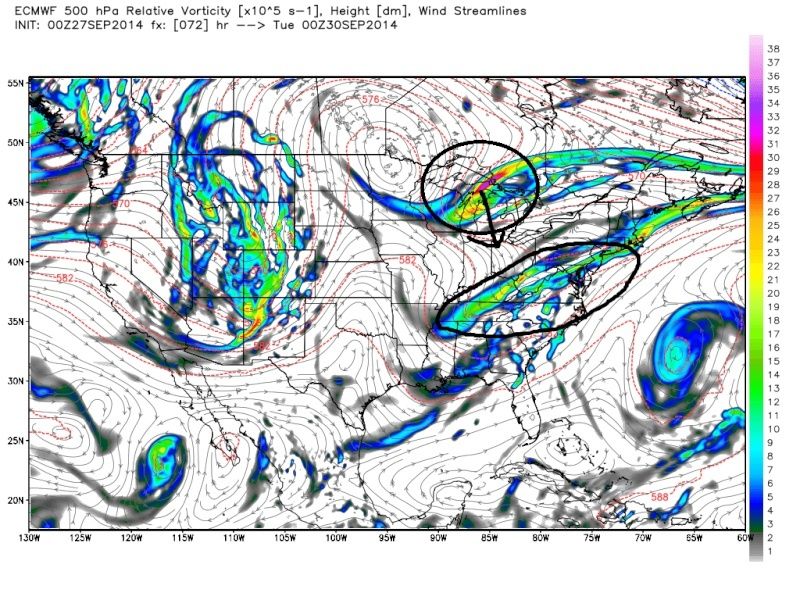 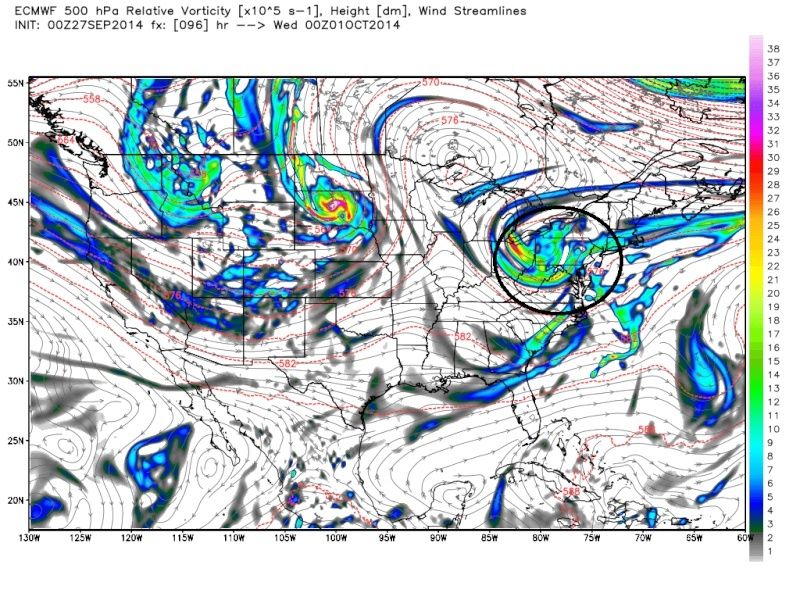 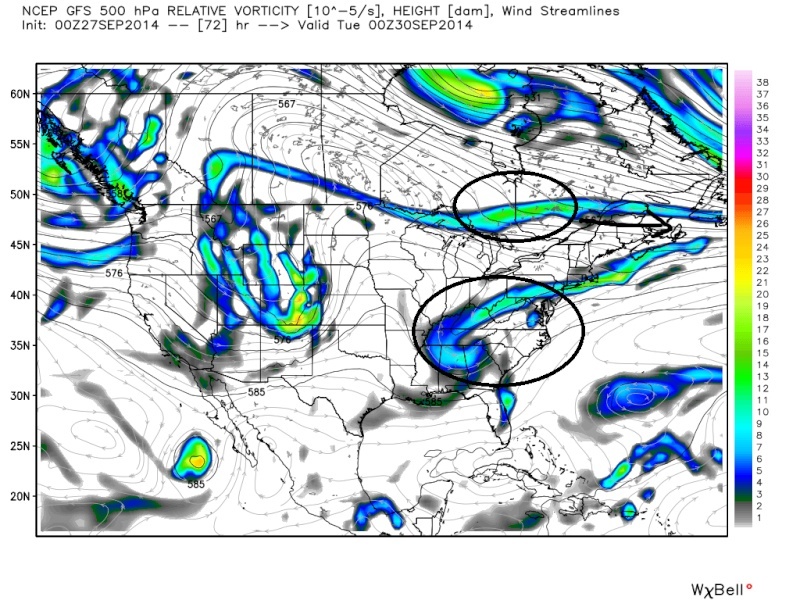 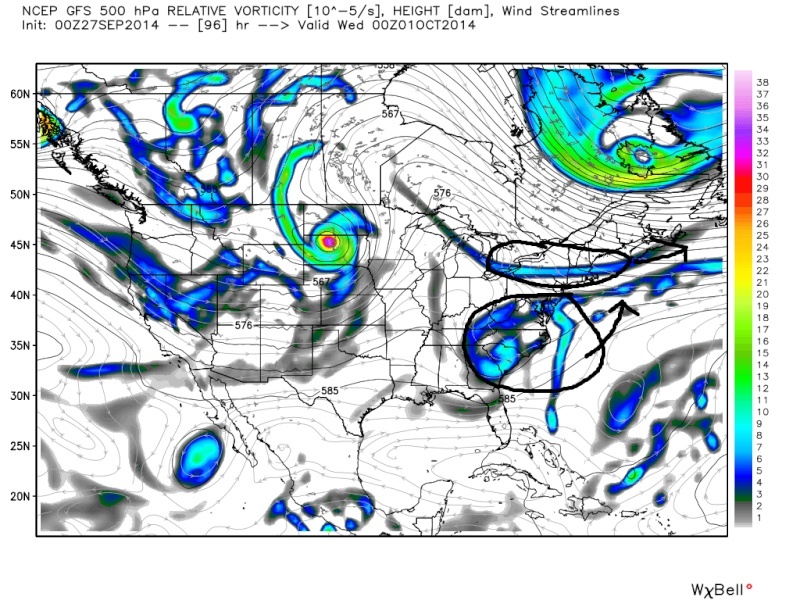 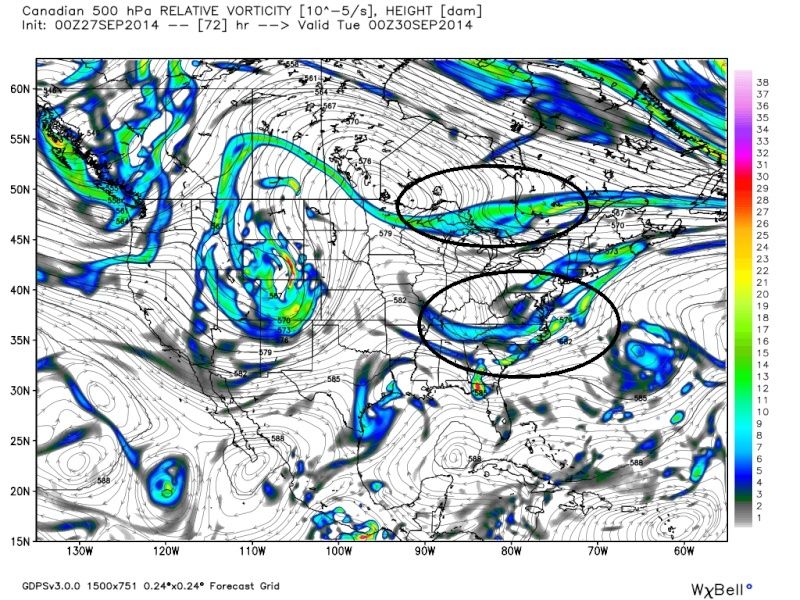 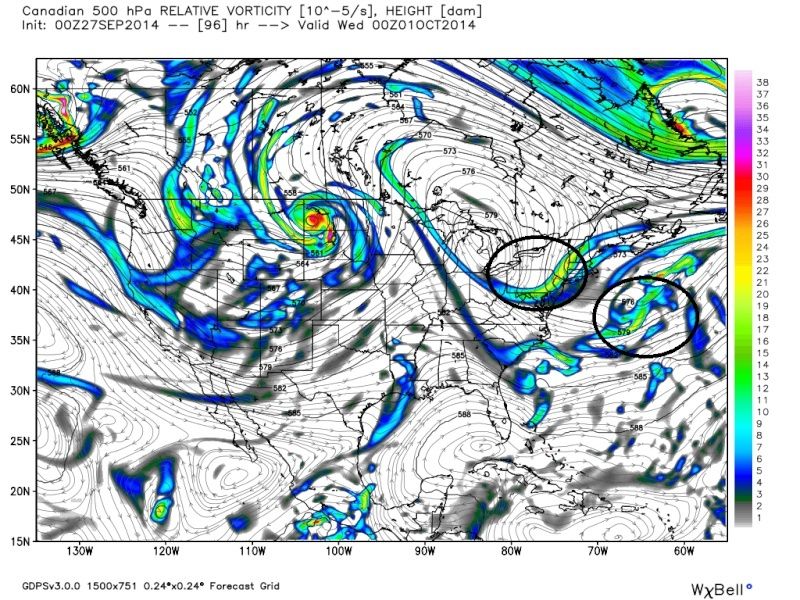 Me too sroc, I have always liked the Euro especially this time of year and winter seems to be more right than wrong. We will wait for our Mr. Admin to chime in on his thoughts. I would have started a new thread but was not sure if I was allowed to or even had the ability to. 06z GFS now has a huge size storm just to our south which moves due north. Seems to be coming closer to Euro idea, we MAY not need 4-8 inches of rain though and 40mph winds. Thats a bit too much rain in a short period of time but I of course am a go for any storm at this time. And algae yup, stayin up for CMC, and TRYING to stay up for 00z Euro with those snowstorms lol.

Yeah I should have known better.  I never really looked out east.  Timing needs to be perfect in a setup like this.  The upper level flow is just too progressive off the coast to slow things down.  I even mentioned the + NAO with the last setup.  Im not sure why I thought this would be different.  For those reading who may not fully understand what that means Ill explain.  When the NAO (North Atlantic Oscillation--here is a great link that explains the NAO and some other key teleconnections that will be talked about a lot in the winter time---http://www.nc-climate.ncsu.edu/climate/patterns/NAO.html) is in a positive state the 500mb (approx. 18,000-20,000ft above sea level) wind pattern tends to be very progressive, west to east, off the east coast.  This means when energy moving along the southern branch of the jet stream and energy diving in from the northern branch come together the timing has to be perfect for them to phase which leads to a strong coastal low pressure system develop (see the Euro images above I posted in my original write up.  With the fast progressive flow its easy for one piece of energy to get strung out or be ahead of the other piece.   Its not to say it cant happen but it is a lot harder.

In a negative NAO state the wind pattern tends to slow down a bit along the east coast with a more SW to NE wind flow allowing more time for southern and northern energies to come together and phase.

Anyway as you can see we are in a +NAO and will remain so through about the 5th at which time it looks to head back into a negative phase for a period.  If it stays in the negative phase dont be surprised to see a coastal storm develop. 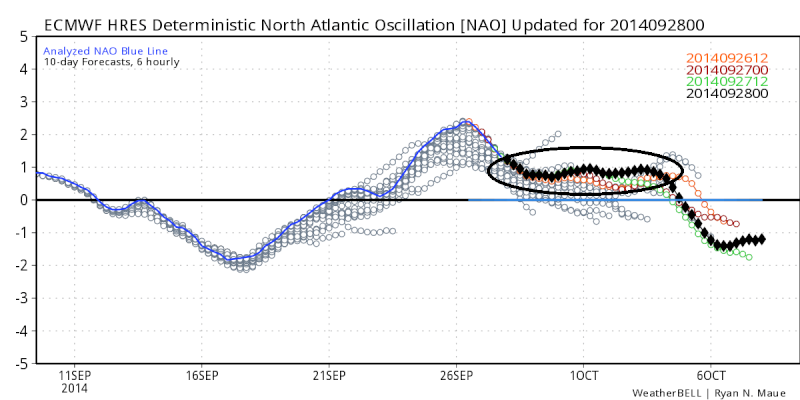 This is what the 500mb wind pattern looks like in the Atlantic in a positive NAO.  Notice how West to East the flow is.  This is allowing the southern energy to escape out ahead of the energy diving in from the north. 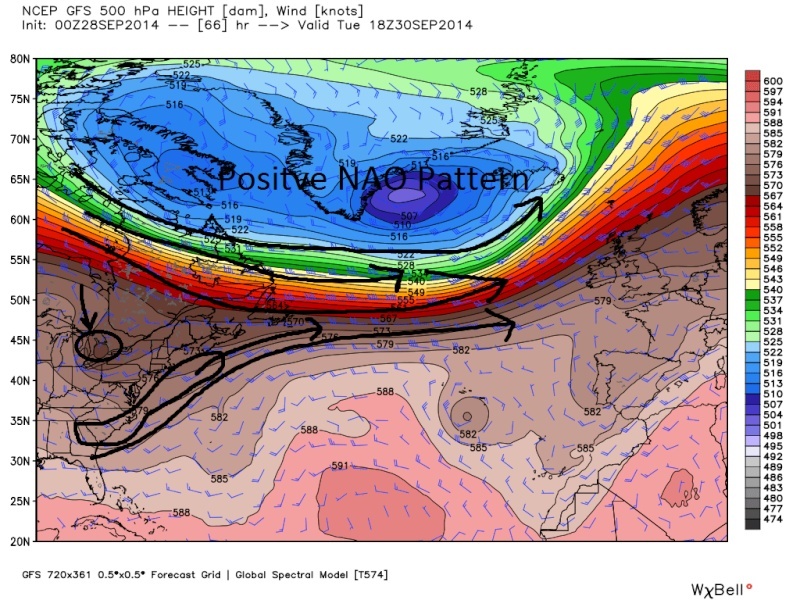 I know there are a lot of regulars who probably know all this already but for those who don't I hope this helps a little, because this sort of discussion may come up again in a few months.

Hey sroc, shucks, but I had question, l though I still see the low develop it appears to get pulled back toard the northeast before getting shunted out, what causes that pull and is it possible the pull could continue enough to get it all the way back? And thanks Frank for clarifying the thread thing.

@jmanley32 wrote:Hey sroc, shucks, but I had question, l though I still see the low develop it appears to get pulled back toard the northeast before getting shunted out, what causes that pull and is it possible the pull could continue enough to get it all the way back?  And thanks Frank for clarifying the thread thing.

This retrograding back west to affect New England has only really occurred on a few different runs.  The example I will use to answer the question is via the 06z GFS on Sept 27th.

What you will notice at hr 132 the northern piece of energy is trying to pinch off of the departing trough. 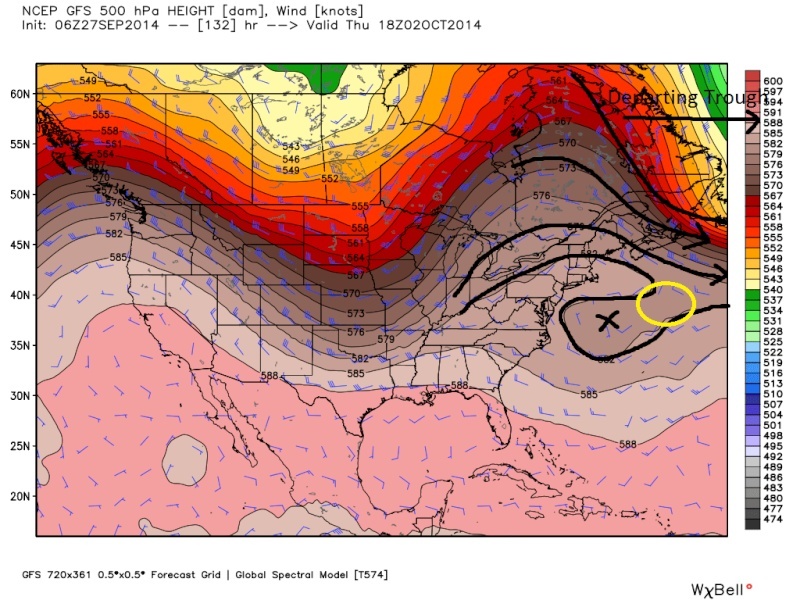 " />
This energy does lead to the development of Low Pressure at the surface beneath it.  Pay particular attention to the HP to the N of the LP. 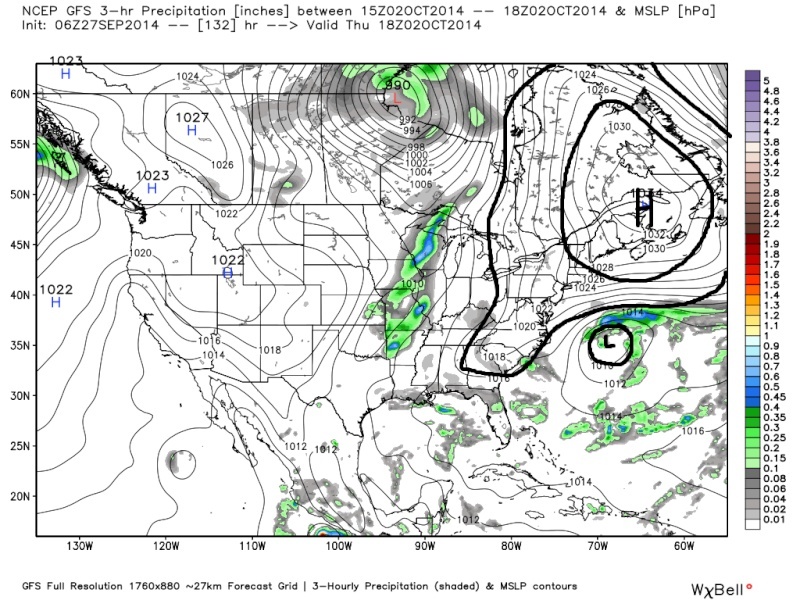 By Hr 138 this energy becomes a cutoff upper level low pressure system.  If you notice there is a circle completely cutoff from the departing trough sitting all by itself.  If you look at the wind direction its east to west immediately to the north of the ULL and west to east to its south (yellow arrows).  Since its off by itself the ULL, and its associated LP at the surface, meanders on its own without much influence by the overall upper level pattern.  At least not yet.  If you look closely at the HP to the north on the surface map its center shifts a tad S and E. 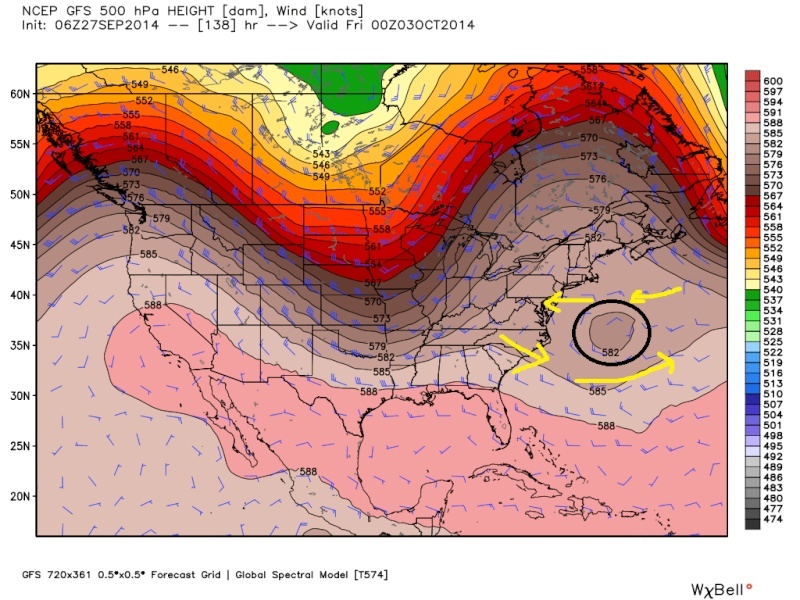 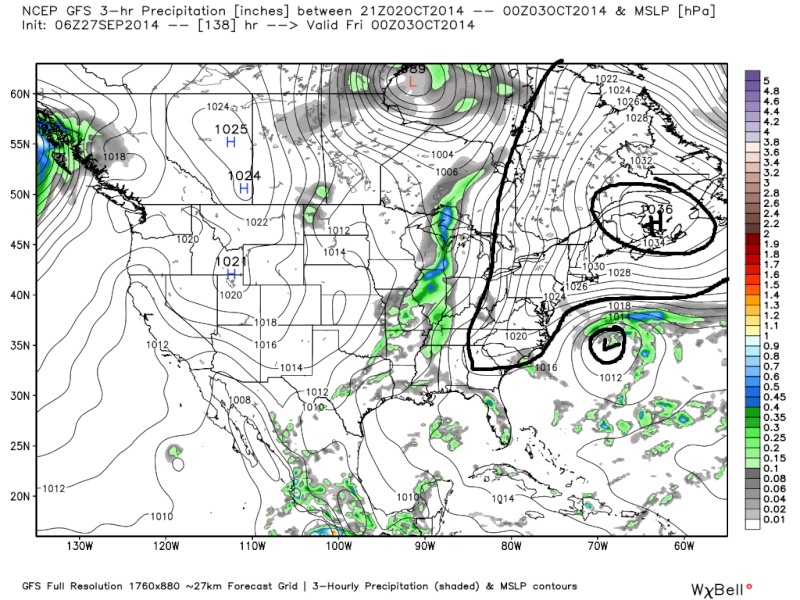 Moving ahead to hr 150 this cutoff ULL now begins to be influenced by the incoming trough.  As a result it opens itself up on its NW side and begins to get drawn back west towards the approaching trough.  (This is what Sandy did.  Sandy got pulled back to the west by the combination of a block to he NE and it getting pulled west by the potent trough arriving at the east coast).  At the surface you can see the HP continues to move east, and the surface LP (which is created by the energy at 500mb) begins to head to the NW as well. 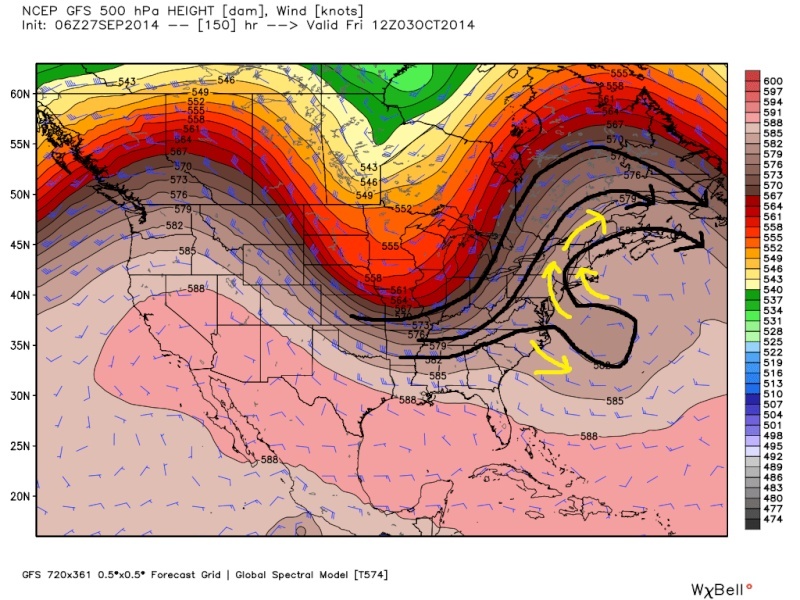 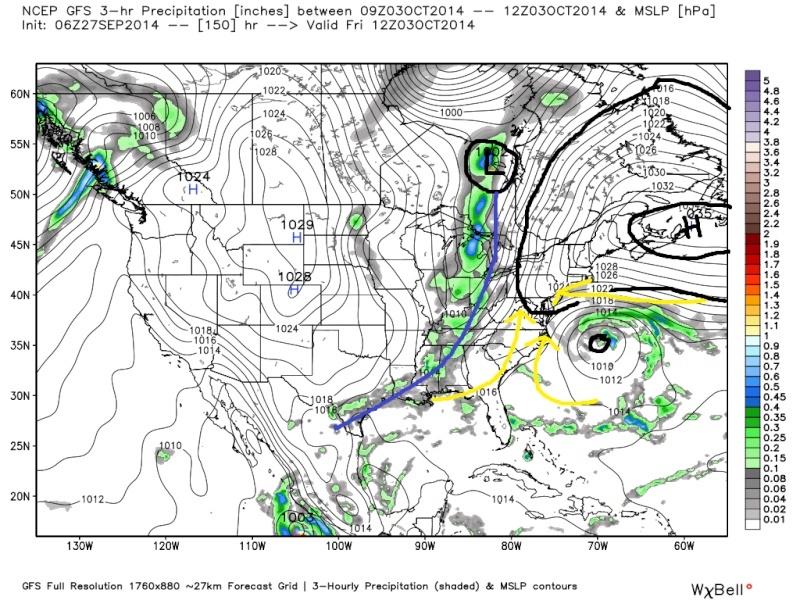 You can see now by Hr 168 the steering flow, yellow arrows is N to NW.  At the surface the path of least resistance for this is around the back side of the departing HP and out in front of the LP associated with the Cold front generated by the incoming 500mb trough where it will eventually phase with this LP. 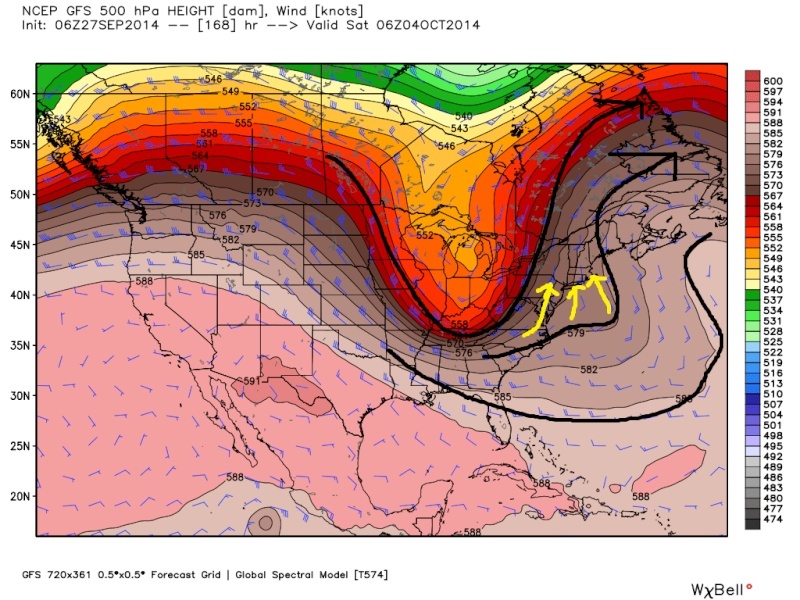 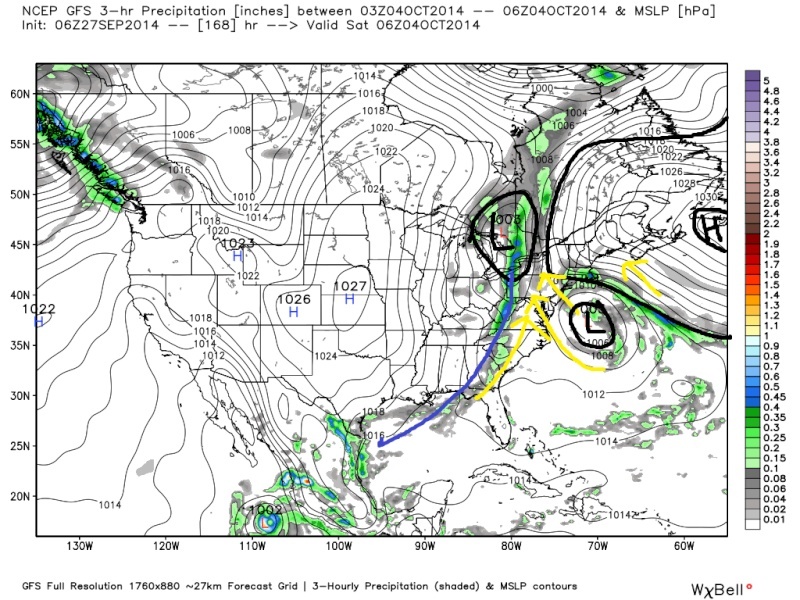 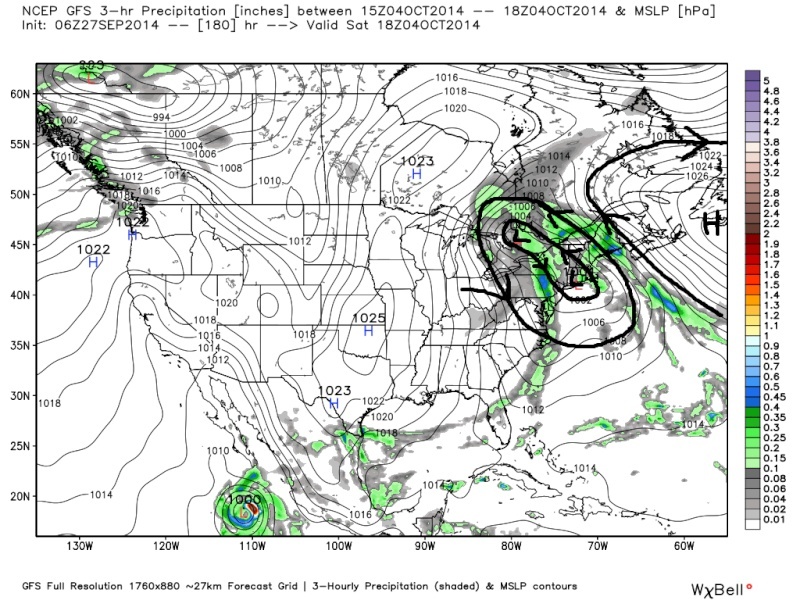 To answer the second part of the question, no I do not believe it gets pulled all the way back to affect us.  It does look like it cuts off but too far OTS and North before its picked up by the incoming trough.  Hope that helped.