@Frank_Wx wrote:People still make that mistake - and idk why - but when the models initialize they take data from 1-2 hours before (something like that) so it rarely matches up to current observations.

ahhh, true, good point Frank. Well maybe i can squeeze out an inch here otherwise looks like Maine is the jackpot for this one. 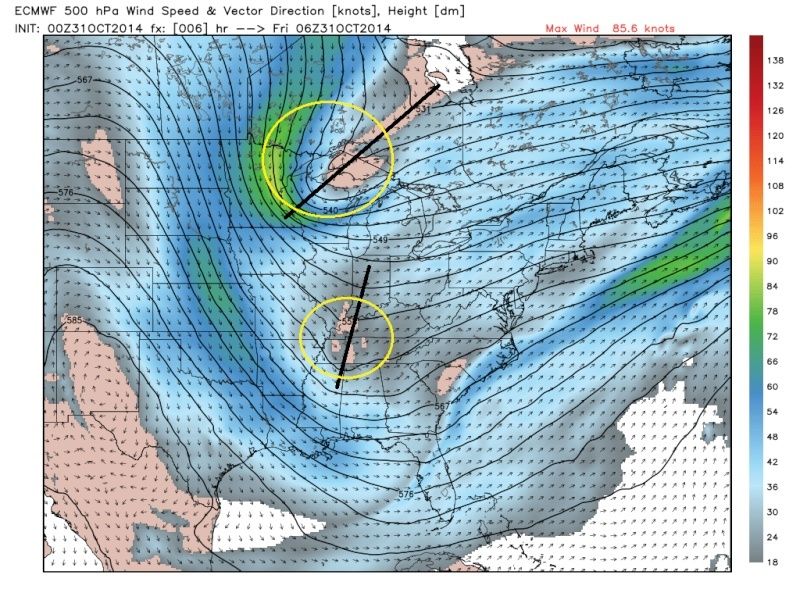 Actual current satellite loop and image and from 5:45am this morning:
http://mapmaker.aos.wisc.edu/scr3/sat/g8/g8wvflash.html 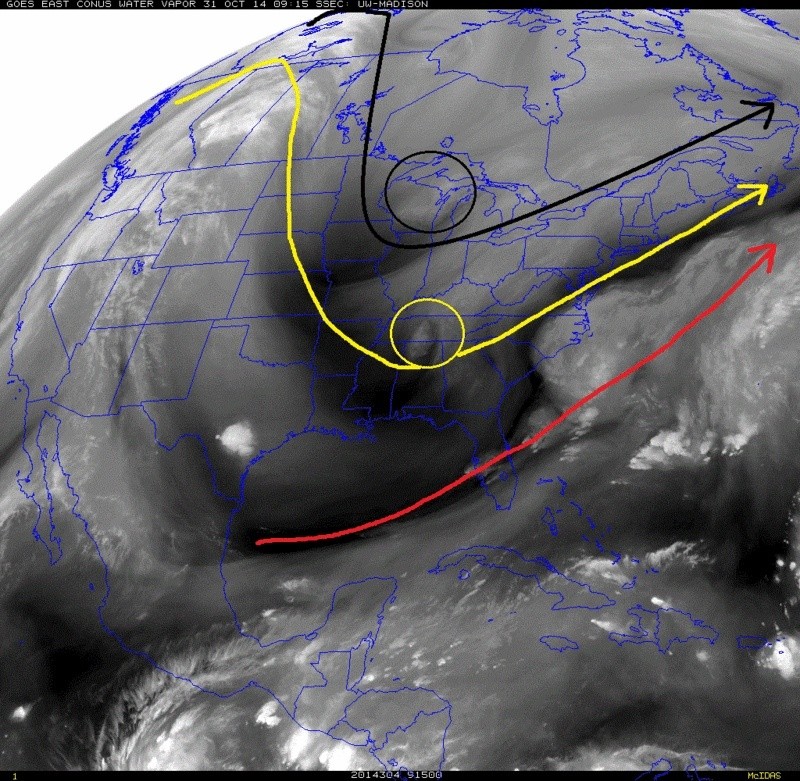 The solid black, solid yellow, and sold red lines show the Arctic, pacific and ST jets respectively as of 5:45 this morning.  The S energy, yellow circle, N energy black circle.  Because there is currently somewhat of a progressive flow off the east coast (refer to fist image above, and or satellite loop to visualize), the Southern s/w will likely remain out in front of the N s/w energy and follow a path to the coast and develop weak LP off the coast which will continue on a path N/NE just S and E of the BM brining most of us light to moderate rain beginning tonight into tomorrow morning as seen here. 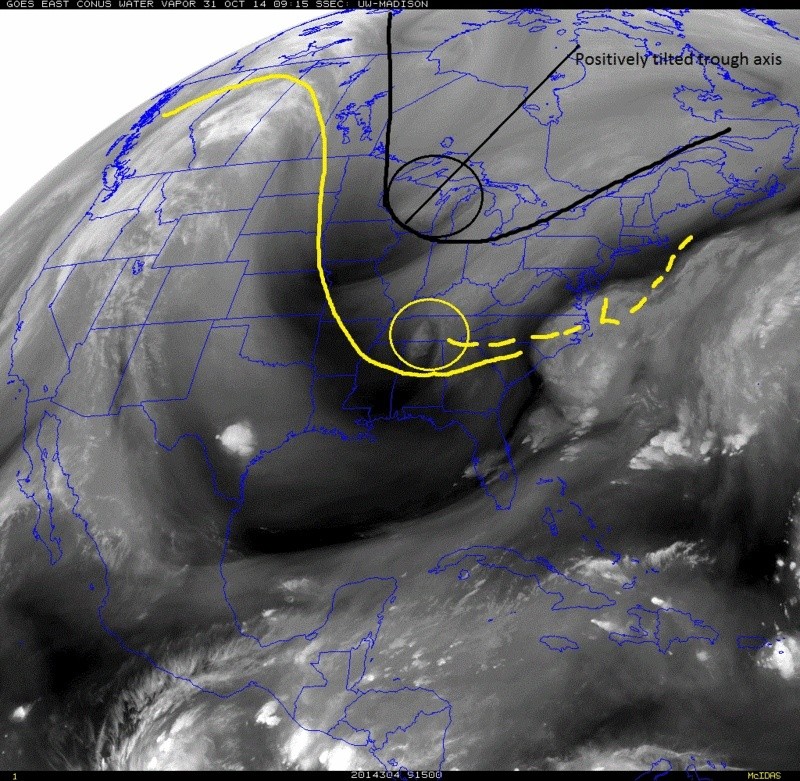 While this first s/w is moving along the N s/w continues to dig into the SE.  Because the N s/w is so amped it digs further S and E than the lead S s/w and closes off at 500mb somewhere at or near E Tenn/W SC/W NC as seen here.  The surface LP pops off the Sc/Nc coast ATT and travels NE from there S and E of the BM. 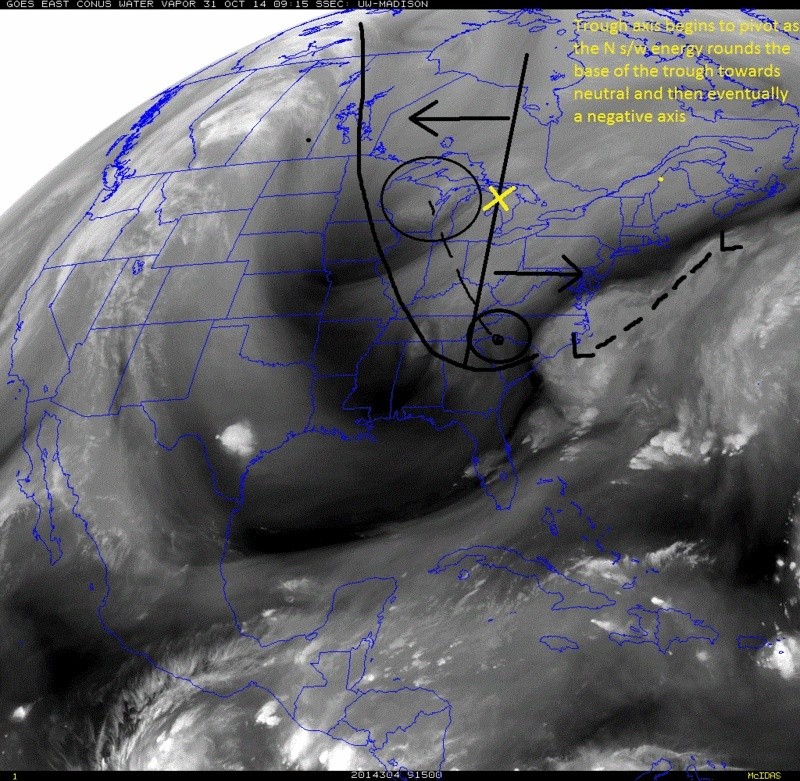 The problem for us lies out west.  Here is the loop in the West as well as the still images:
http://mapmaker.aos.wisc.edu/scr3/sat/west/westwvflash.html 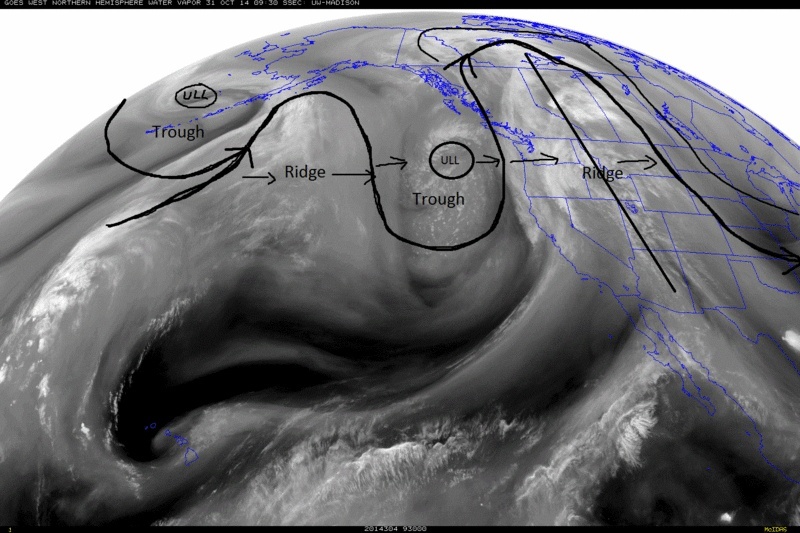 Notice the trough just off the NW CONUS.  In the Satellite loop you can clearly see its current motion is west to east.  The result of this is to continue to shift the ridge axis further east.  So by the time our N stream energy rounds the base of our nicely dug trough and the overall flow runs up against the blocking trying to establish itself up in Greenland our trough axis is centered too far east.  As a result the pivot causes the surface LP just too far S and East of where we need it to be.  Because blocking is present a phase occurs, just too far tour N and East.

1 of two things needs to happen (or both) before the N s/w energy rounds the trough.  1)  the blocking builds in faster and stronger to our NE forcing the phase sooner or 2) the ridge axis hangs back so that the axis if our trough pivots further west which would bring that secondary LP that develops off the N s/w energy further west.  IMHO Unfortunately there is nothing I see in the current observations in the satellite loops that either of these things are going to happen.

Overall I believe  0.25 to up to 1.5" of a cold rain should be expected from west to east higher amts along the immediate coast.  However; the immediate coast still has to watch because they are still only 50-75 miles away from a jog west of this track to increase rain totals to 1.5-2.5" with isolated higher amts possible in stronger rain bands that come in off the ocean and/or enhancement via convection from an inverted trough set up with the first wave of LP that will move through.   But, overall the wind, temps, and wind chill temps for the NYC Marathon will continue to be the head line with this system.
Side note for thos of you who didn't see it I posted the story picked up by ESPN of my sister who is running in the NYC Marathon Sunday in honor of my mother who is a breast cancer survivor in the off topic thread.  Pretty cool story if you have a chance to check it out.

Man even boston...Jim can tore must be there is shown on wxbell to get about 2 to 6 inches.

Who knows mets, maybe you wil lget lucky and see more, the storm hasnt formed yet. Models took it out of Maine mostly this morning too.