In my original Thanksgiving week outlook I posted a few days ago, I indicated Tuesday and Wednesday may be the best days to travel. However, I did take notice of a clustered group of H5 energies that were being shown on the EURO and I said this may have a chance to turn into an organized storm. Low and behold, the latest model runs are now showing a potent coastal storm on Wednesday. Rain or snow is uncertain at this time, it could be both, but there still exists the chance this slides out to sea. 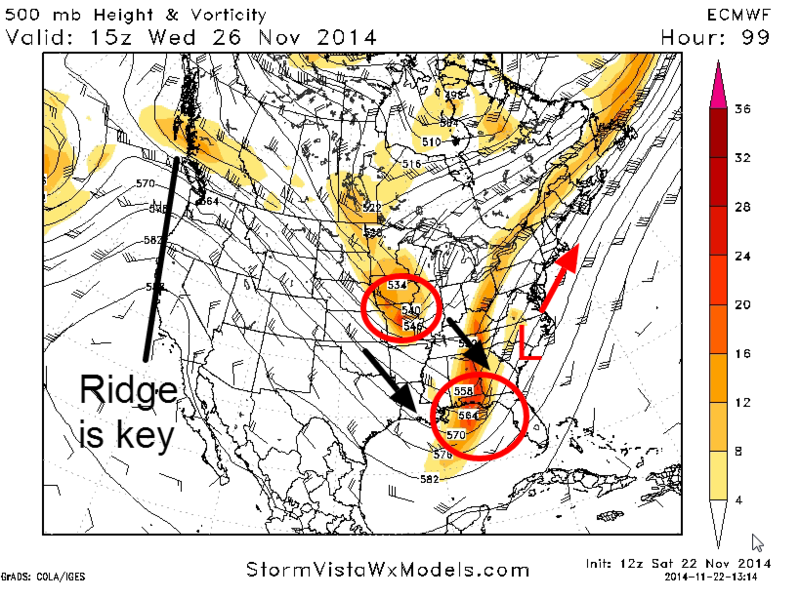 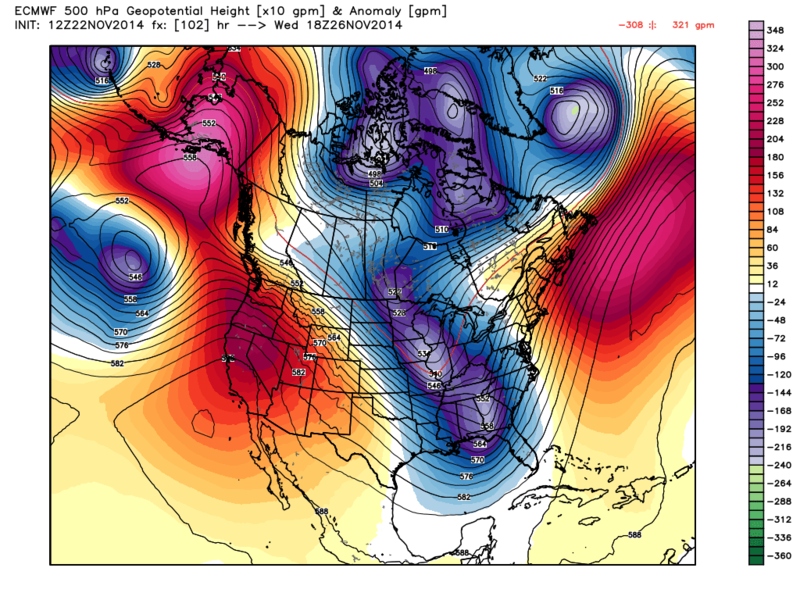 The EURO h5 maps show some semblance of a western ridge, but it does not look very organized. If it falls apart on future model runs, this storm will NOT happen. So the ridge is key. Also notice there is completely no blocking. Good timing with the phase is what will eventually drive this storm up the coast. The 2 red circles shows the northern and southern streams, and there is even another piece involved around the Great Lakes that almost make this look like a triple phase.

Scenario A: A strong Nor'easter impacts the coastal plain from Washington DC to Boston, MA bringing heavy rainfall to changeover to heavy wet snow, resulting in minor to moderate accumulations. Strong winds and major travel delays would result. Power outages would also be of concern due to the heavy wet snow and strong winds. QPF amounts could be in order of 1.50-2.50'' (20%)

Scenario B: Scraped by a coastal storm bringing lighter winds with rain, snow, or possible mix. Delays would still occur but not as major as scenario A. This scenario probably has a weaker storm with an unorganized phase of the upper level streams. (30%)

TWC: 70% rain/snow on Wed, NYC. Not that it matters (it's them) but interesting to see the chatter change now with the other models beginning POSSIBLY to trend toward Euro.

Woah thats two almost identical runs on Euro, 1.5-2.5 qpf equating to wxbell map of 10-14 inches of snow would mean like u said be very wet, winds gusting as for now eastern areas up to 70mph, 20% is a conservative estimate for wcs (IMO) for now good though a still a lot uncertainty, all snow or not be very bad.  This would be a big problem system with what Euro shows, in fact a dryer snow would probably be better, power outages last thing we need to ruin thanksgiving.

40% of Euro ensembles have a big storm event (verbatim snow totals about what actual Euro shows) but of course temps will be the issue here. This is pretty high for 5 days out for ensemble agreement.

Yep they are out earlier now : )  Yep Frank, looks like a good shot at a big storm, you still thinking 20% after seeing ensembles?  Also remember the 12z GFS trended west too.  Forget the CMC I believe that is the outlier now despite what the NWS says with all due respect as they are the head honchos.

GFS seems to be ticking west but I dont like the fact the CMC is not agreeing with the EURO here yet. I still think its 50/50 OTS or we get hit by something.

NJ not sure who it was but I read on here earlier that the CMC has been the worst.  I wouldnt even pay attention to it.  I think GFS and Euro are going to be our friends and Ukie (I do not think its in range yet is it?  If it is what is it showing?

God I love this time of year.  Getting my butt handed to me at work only to find statements like this,  I love it.  Obv it goes without saying that we still have a long way to go with this.

Yeah, gonna be a long few days of model watching.

Working hard on that project huh Frank lol, I should be doing a paper now too lol, ensembles really have this one a good possibility, if we get a similar run again tonight and tomorrow on Euro regardless of other models my confidence will go up a lot

Also steadily moving up in time and landing about same timeframe with each run which is another sign of consistency.

Left half would be nice, just looked at CMC ensembles and like the OP it barely shows anything. Hopefully it catches on soon, anyone have UK? 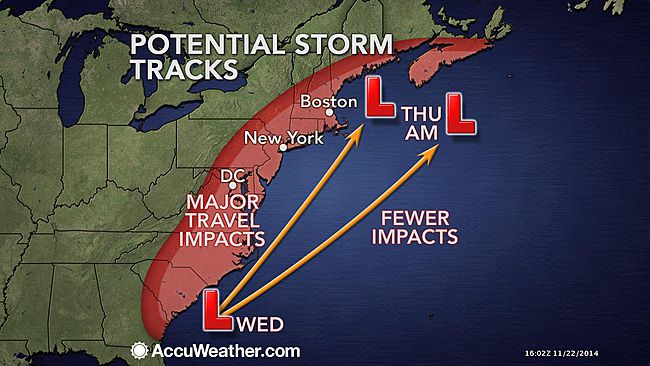 esentially what Euro is showing or CMC is the further OTS, but they talk about mostly rain, IMO I think this could be wrong for at least the latter half we cant get 6-12 with all rain lol

Accuweather also calling for very windy conditions, 40+ mph gusts, like I had been saying see winds a isssue early monday morning through at least part of day and IMo may hit over 50mph in some locations.

Looks like GFS coming in about same as 12z, keeping that west area. Wow, instantweathermaps.com has wind gusts on the right side of storm near 80mph surface with wed/thur storm.

Upton now issued HWO this for NYC and westchester area along with CT.

.DAYS TWO THROUGH SEVEN...SUNDAY THROUGH FRIDAY.

POTENTIAL IS INCREASING FOR A COASTAL STORM TO AFFECT THE REGION
WEDNESDAY INTO WEDNESDAY NIGHT...BUT UNCERTAINTY EXISTS IN HOW
CLOSE TO THE REGION THIS STORM WILL TRACK. A COMBINATION OF
WINTRY PRECIPITATION...RAIN...AND WIND ARE POSSIBLE WITH THIS
SYSTEM. CONTINUE TO MONITOR NWS FORECASTS FOR THE LATEST ON
POTENTIAL STORM RELATED HAZARDS AND IMPACTS DURING THE BUSY
MIDWEEK HOLIDAY TRAVEL PERIOD. 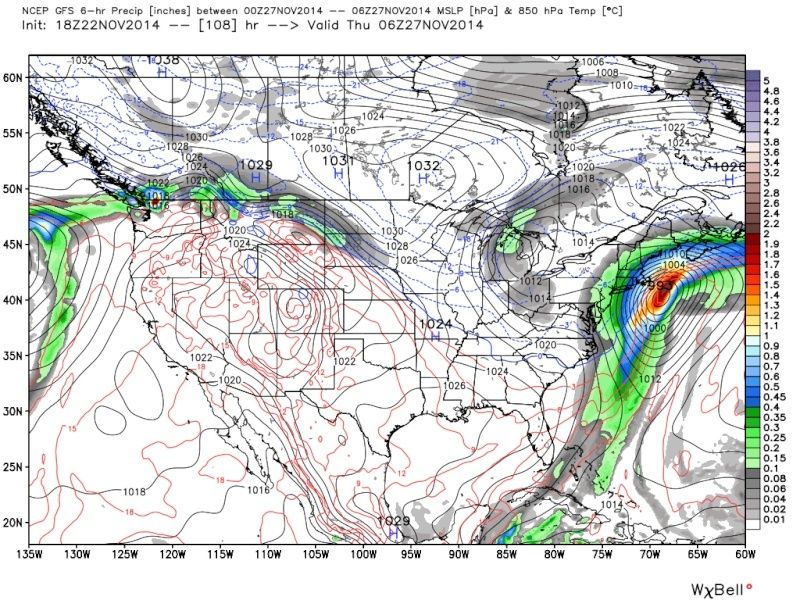 I'd say we've got ourselves a TREND, kids!