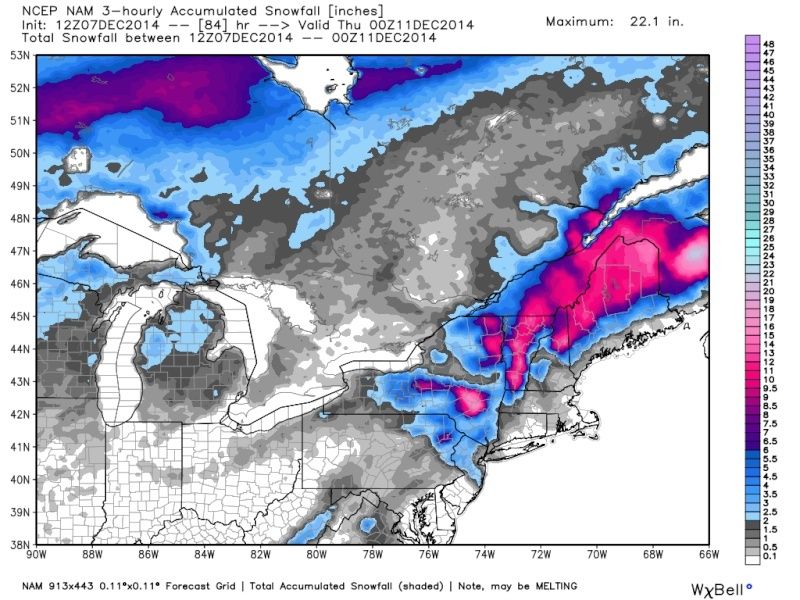 Just got in from seeing the radio city Xmas show, tree fao Schwartz and dinner in the city wow was it windy and cold!

So I've found the difference between 12/00z NAM runs-it's the southern stream. In the 12z run, the southern stream energy (red) at H5 was modeled to be significantly stronger than what the latest 00z run has it (by 11*10^-5 s^-1, which is nearly 50% of the total intensity). This has huge downstream implications. With a weaker southern stream, the height rises immediately ahead of it are much less than in 12z which leads to the differences in the evolution I mentioned earlier. Based on what I can see in recent water vapor imagery, the weaker solution looks to be more accurate in my opinion, and here's why: the water vapor imagery does not have a clearly definable mid-level circulation, or even the hint of one, like I would tend to expect in a stronger vorticity signature. Instead, it is just a strung-out wave passing through the southern states. Note that the northern energy is circled in black and the energy responsible for helping to develop the coastal is in yellow.

Just got inform seeing the radio city Xmas show, tree fao Schwartz and dinner in the city wow was it windy and cold!

My wife and I did the same thing Friday Mugs, where did you eat? We went to Citi Lobster across the street from Radio City.

GFS coming in with snow for the area, rb, its still got time to wrap up. Wait ill post snow map in a few.

Just got inform seeing the radio city Xmas show, tree fao Schwartz and dinner in the city wow was it windy and cold!

My wife and I did the same thing Friday Mugs, where did you eat? We went to Citi Lobster across the street from Radio City.

Billy's Bar and Pub right behind Radi City on 51st street - windy and cold!! We go every year with our kids since my youngest was 1 - 12 years in a row. Use to go the Heartland Brewery but they closed last year

wow this is a long event. finally stopped at 96. 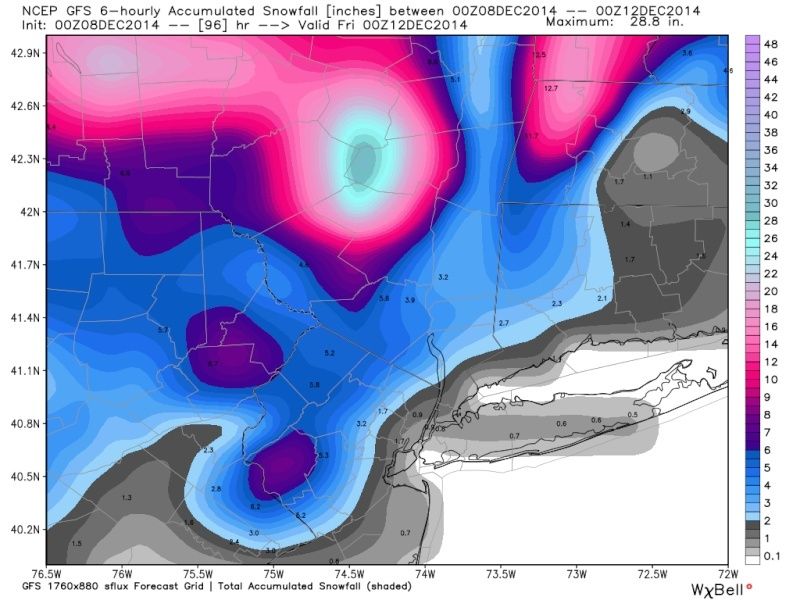 Here's what bothers me about the GFS; I truly think it is close the right track. I think that the southern stream is going to end up being a little weaker than previously thought (just me, no scientific backing there at all) but I definitely DO NOT think it is handling the precipitation shield correctly. There is way too much mid-level forcing that should be allowing heavy precipitation to be thrown much further west than it's being modeled. This is also screwing up the temperature profiles. I honestly just don't know which way to go with this system. I'm going to go to bed, and hope and pray to all things holy that I wake up and see that all of the other models ticked east and came in line with the GFS' low position. Doubtful, but I can try lmao

I need that snow to come about 50 miles further east and ill be happy, if it is not showing precip shield right then the snow map could be way off, imagine we actually are cold and all see snow lol, i would die lol, doubtful but stuff happens.

Wow cmc is warm WAY inland, forget the models unless things come in line 12z tomorrow this is a nowcast, this is rediculous! Is this going to be all winter long because I may have a drinking problem by the end lol

@SNOW MAN wrote:They already posted a WSW for my area for Monday night until Wednesday for 7 or more inches of snow.
Now it's off to bed got to go to work tomorrow because I may be out on Tues. and Wed. lol !

He lives!! It takes a WSW to bring him out of his tree trunk.

Good morning CP, yes I'm alive. I've been busy sprucing up my log for the holidays. I just looked at inaccurate weather and I see it's now a warning for my area.. But if you read there forecast it says little or no snow accumulation for Tuesday. I may have to crawl back in my log and try to figure this all out.

Snowman. The problem as my untrained eye sees it is there's to much mid level warming going on for this to be a snow storm. Right now the thinking seems to be more freezing rain and sleet for the areas that stay near or slightly below freezing. I hate that s##t I really do. Nothing worse than 32 degrees and pouring rain. Anything can happen still but that appears to be current consensus for 50 miles north and west.

I guess I'll have to wait and see what happens. I just don't want to get to work tomorrow (62 miles away) and then get a phone call from my wife saying you better get home because it's snowing heavily and STICKING !
UGH ! Thanks for your input.

Frank made a new thread with maps, no one gets snow but way inalnd. The problems are going to possible flooding and very high winds gusting 55 to 60mph, with saturated ground this spells bad news for some power outages, worst winds mid morning into afternoon tomorrow.

Frank did we not call that last night or what lol. Was issued at 6am.

High of 34 predicted tomorrow with 1-2 inches of rain. It doesn't get anymore frustrating then that.

Yep, saw this torching yesterday and figured it to be Poconos,Catskills, Adirondacks, Green Mountain.

High of 34 predicted tomorrow with 1-2 inches of rain. It doesn't get anymore frustrating then that.

@skinsfan1177 wrote:This storm is going to have a great affect on the coast with beach erosion waves are huge today and very rough

Morning all!!! I see we are still in the same boat as last night, but the EURO and UKMET ticked east overnight

Jman, can you post the EURO snow map, please? I know totals are in the 12-18" range, but I'm curious lmao thanks!!

Looks like 12z NAM may be coming slightly colder as well.

Yep, it did. H7 closed low is located over eastern NJ versus western NJ at 00z. Surface low doesn't really reflect that in it's location, but that will result a huge difference in the low and mid-level temperature profiles.