GFS snowfall totals for the GFS run actually are not that high, math what maps were you looking at? I was surprised, but yeah we will know soon enough how much we can rely on the new GFS starting with Sunday which it still has also, but warm, but if the storm happens regardless there is one thing that verifies.

I will not take anything into consideration until we are a day or two out. Especially the way this winter has gone and how the models have been.

@jmanley32 wrote:GFS snowfall totals for the GFS run actually are not that high, math what maps were you looking at?  I was surprised, but yeah we will know soon enough how much we can rely on the new GFS starting with Sunday which it still has also, but warm, but if the storm happens regardless there is one thing that verifies.

Well, I looked at weatherbell.com and while it is known for its 10:1 ratio for snow maps, 850 mb temperatures are cold enough for snow the whole time.

@WOLVES1 wrote: I almost started to cry, I haven't seen that in a long time.

lol lets all not get to excited cmc has a cutter....but what a start for the new gfs. picking up where the old gfs was. big disappointments!

well at least something to track. with the gfs we can only go downhill.lol

Knowing how this winter has been, I'm sure mother nature will likely take the cutter route...

Yeah it's sure beautiful in fantasy land

Don't say that math, lets have faith in the new GFS until it proves us wrong. We gotta have something to hold onto LOL.

lol accuweather shows on the forecast "on and off snow"

@jmanley32 wrote:Don't say that math, lets have faith in the new GFS until it proves us wrong.  We gotta have something to hold onto LOL.

As Algae mentioned, the 12Z GEM shows a cutter.

And the 12Z EURO towards the end of its run also has a low pressure system emerging from Texas (which the GFS does a bit earlier) and at hr 240 it is further south than the GFS has it (more specifically off the southeastern US coastline) Since that is a far as it goes, we can only speculate as to whether it goes due north or goes out to see.

As for the 12Z EURO ensembles, it has for the day 9-10 period several members with lows right off our coastline including a couple right at the 40/70 BM.

Jman, do you remember those EURO ensemble snow graphs I showed you and the others at the meetup last Saturday? Well, I am still waiting for the 12Z graph to come out.

One thing to note, models are picking up on a storm (mainly in the form of rain) next weekend. We should wait until that system passes to get a better idea for the situation for the weekend after that.

Okay folks took sometime off to regroup and I am ready for the 2nd half of Meteorological winter to start tomorrow as well as getting paid - HAHAHA!!

F that storm next Friday - to friggin far out AND who teh hell want ssnow on a Friday night peeps coem on - Sinday night bring it but a Fri or Saturday - bite me - beggers can't be chooser but I am - HAHAH - but have to love the new supercomputer GFS that is going to kick ass I say going forward - no more euro's needed just good old red, white and blue GFS!

Close call for NNJ and NW NJ - not enough moisture in the cold sector NW quadrant at this time BUT with the pattern changing in a big way I believe this could be the kick start.

Need a neutral to slightly neg NAO and if we can couple this with a mod strong PNA then we are in good shape - Trop forcing from Nino and the PAC should help slow things down and calm down that frickin' beast that has been killing our potential storms as well. Things are starting to hopefully get their act together as the PAC is starting to show for the good.

I see 1992-93, 1978-79 analogs for the second half of winter based upon what the models are showing Jan 20th - March 1st timeframe of cold and snow - most nino (weak) are back loaded winters and this should hold true too. 2010 style would be great but I do not see this unless we get that NAO to go negative (2 SD).

But you are absolutely right amugs, we shouldn't worry about that one, we should instead focus on the system for this weekend. A thread should probably be posted on this forum sooner rather than later regarding this weekend.

Here is his video (NOTE: If you have never heard him before, turn your audio down. Once you see a few of his videos, I think you will really like his channel)

I was prepared to be patient after leaving the get together up until the 24th. Now all of a sudden there's a snowstorm, no wait a cutter, never mind its an OTS! Someone give me a straight answer, or as close to one as you can! Snow Sunday night into Monday yes or no!

Can't see images mugs and Franks and math ha Frankie, known bout him for a while!  He is actually autistic and I give him big props for being so enthusiastic, it is a very hard life to live and he has a great passion. F*** the people who make fun of him. "Get your pizzas get your chinese food, its gonna be really bad" thats my favorite part in his videos.

I can't wait to see it all come together everyone getting on me oh I thought this winter was going to be bad and blah blah blah. So I hope a Godzilla exist lol 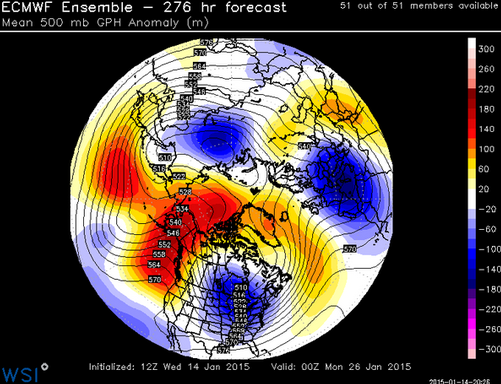 In regards to the possible storm on the 18th: The 12z EURO and GFS models showed drastic differences in how they handle key features at H5. Lets take a look. 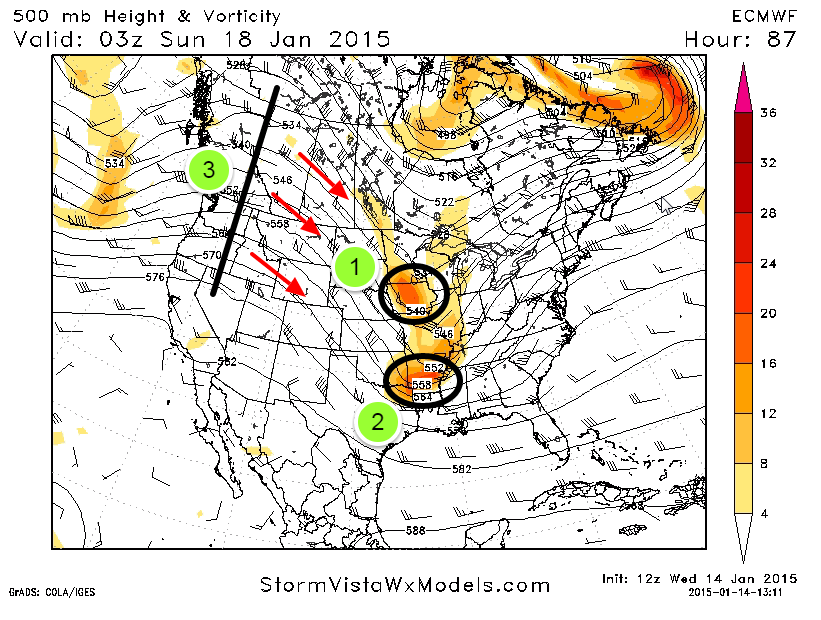 The EURO does a great job in digging the northern (#1) and southern (#2) stream energies resulting in a phase over the Mid-Atlantic. The trough goes from neutrally tilted to negative enabling cold air to get pulled down to the coast. Granted, the coast starts warm this run because H5 closes off over eastern PA, but cold air is quickly crashing east and some areas change from a heavy rain to snow. Where H5 closes off will determine the temperatures for this possible storm.

You notice the western ridge (#3) is not exactly oriented favorably. A potent piece of s/w energy is crashing into the Pac. NW which will collapse the ridge and turn the upper air flow to a zonal state. On the next image you'll see what I mean. 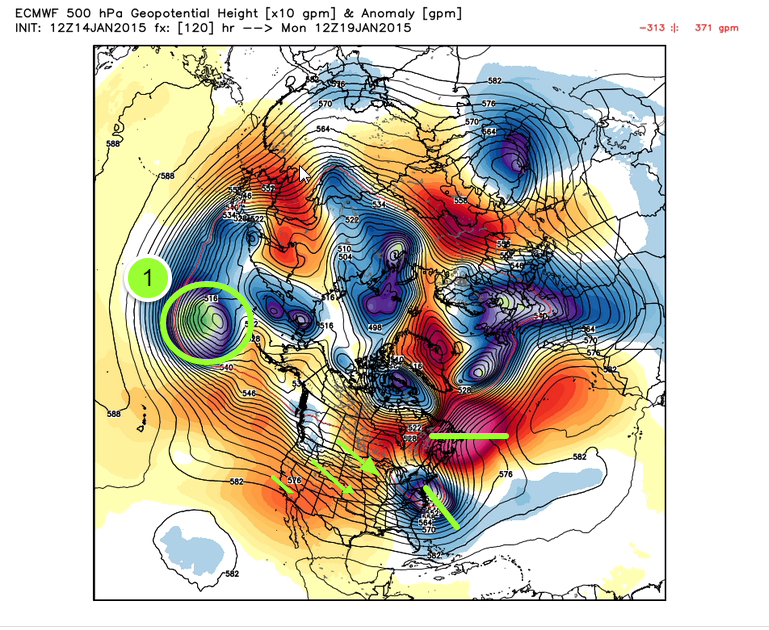 Taking a look at the EURO height anomaly map you notice the ridge collapses but there is a pretty nice storm along the coast because of how the phase came together downstream. Timing is going to play a large role in how this storm shapes out because the overall flow remains progressive. The blocking is not yet established and the PV is re-developing over Arctic. The large trough (#1) about to settle over the Aleutians is going to set the tone for a pattern change around the 22nd or so, which may also feature another storm threat. At that time, I feel like the blocking will be better established and there will be more cold air to work with, too. 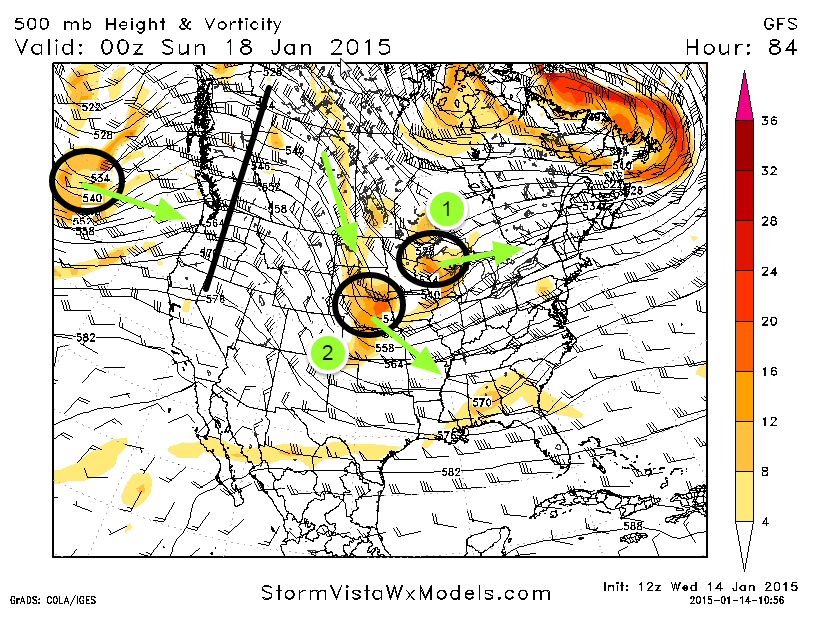 The GFS actually takes the northern stream (#1) east into Canada while the more potent piece of energy (#2) digs into the eastern CONUS. I also marked the energy coming ashore in the Pac. NW and you'll notice the GFS is really amp'd with it. Thus, the western ridge collapses much quicker compared to the EURO so the flow turns zonal in a not-so ideal time. 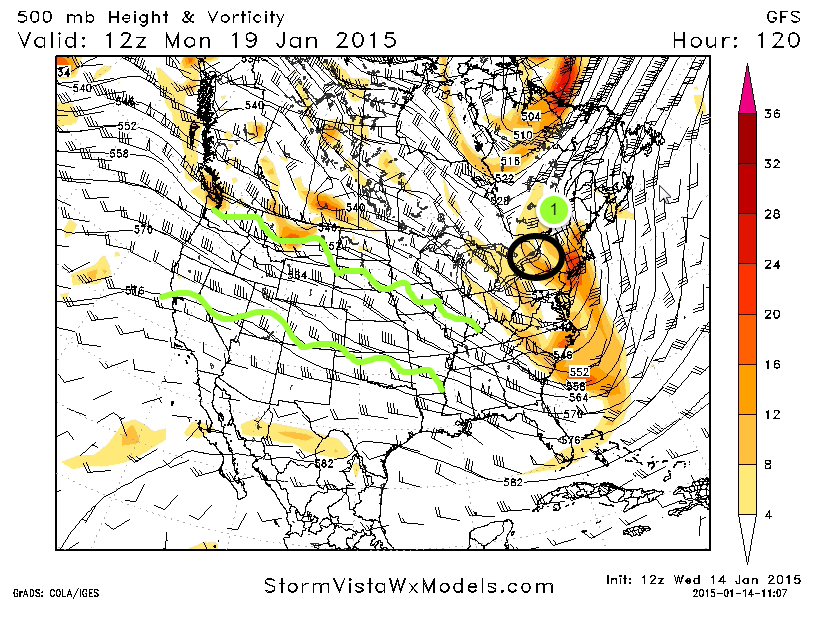 H5 closes off well to our north and west over Upstate NY but the storm is located off our coast due to the quicker breakdown of the western ridge, turning the upper air flow zonal. While the EURO deepens the storm near 985mb, the GFS struggles to get sub 1000mb due to the sloppy look at H5.

Personally, this is not a set-up screaming "big" storm to me but there remains the possibility that a weak storm impacts our area bringing rain or snow. I do not feel the overall pattern supports a potent storm the EURO is showing. A collapsing ridge out west, a poorly established block transient in nature, and a split PV is not a recipe for a big storm. Again, precip type will come down to the timing of the phase and where it takes place. It would not shock me if the storm does not materialize and the energy escapes out to sea. But we'll see.

That said, I touched on in the EURO section of this write-up that I like where the pattern is headed post Jan. 21st or so. This has been the time frame I and many others have liked for awhile now once we realized the effects the Stratosphere will bring to our Troposphere, as well as, seeing the tropical forcing propagate eastward toward and east of the Dateline. In my mind, the period to watch remains the 22nd-26th with even more chances after that.

Something else to note in addition to what's already been said is that these systems that develop along cold fronts, strong fronts especially, typically have an incredibly sharp QPF cutoff due to the very strong subsidence caused by the thermally direct ageostrophic circulation at upper-levels (jet dynamics). Where that front is when this passes by will determine who sees precipitation and who doesn't. To me, I think this is going to be wet for those that do see any precip at all, because once the front moves through (temperatures begin to crash) the precip will end. Just my two cents. Also, the placement of the jet is not likely to be in a favorable location for large-scale ascent and precipitation. It's almost directly overhead (in coordination with the front, as is to be expected) instead of a couple hundred miles to our west, where we'd be in the right-entrance region.