1. A "Godzilla" is classified as a widespread 12"+ snowstorm. The possible storm this Saturday does have that type of ceiling.

2. I'm not calling for a Godzilla. It's possible this storm goes out to sea, but maybe if we analyze the pattern we'll have a better idea than the models.

3. I'm doing something a little different (now that I'm working full-time) where I will have a new Update every day leading up to the possible storm. You can expect these between 6-8pm.

The GFS model has a healthy coastal storm bringing moderate to heavy snow to the area Saturday. Lets take a look at some upper air images: 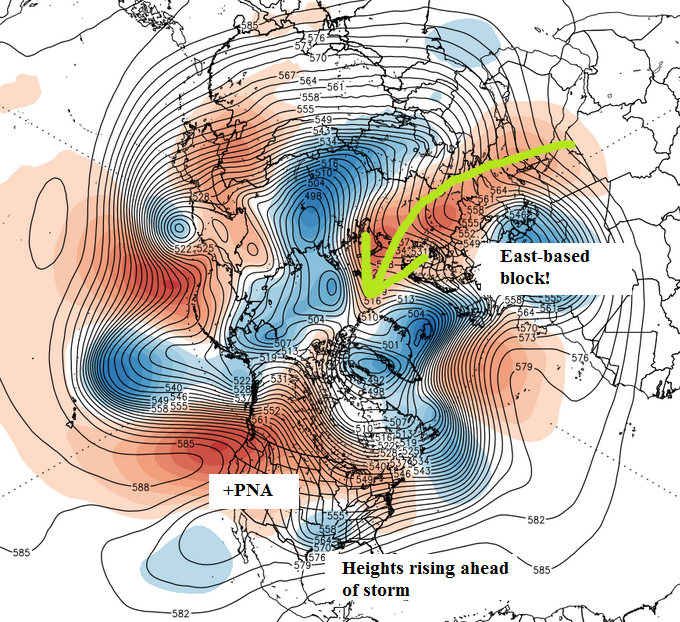 This height anomaly map from the GEFS show east-based blocking pressing down over the NAO region. It's certainly not a great block, but between the Atlantic and Scandinavian ridge that will help slow down the northern stream jet and possibly slow down the flow enough to promote a phase between both jets on Saturday. 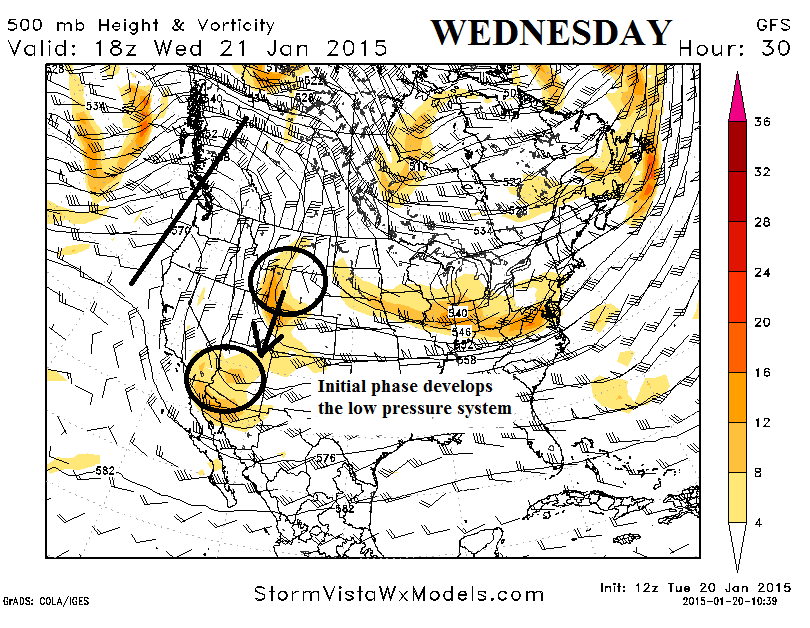 Wednesday we are going to see the sub tropical jet stream energy phase with pacific energy in the SW CONUS. The collapsing ridge helps eject that vort east. 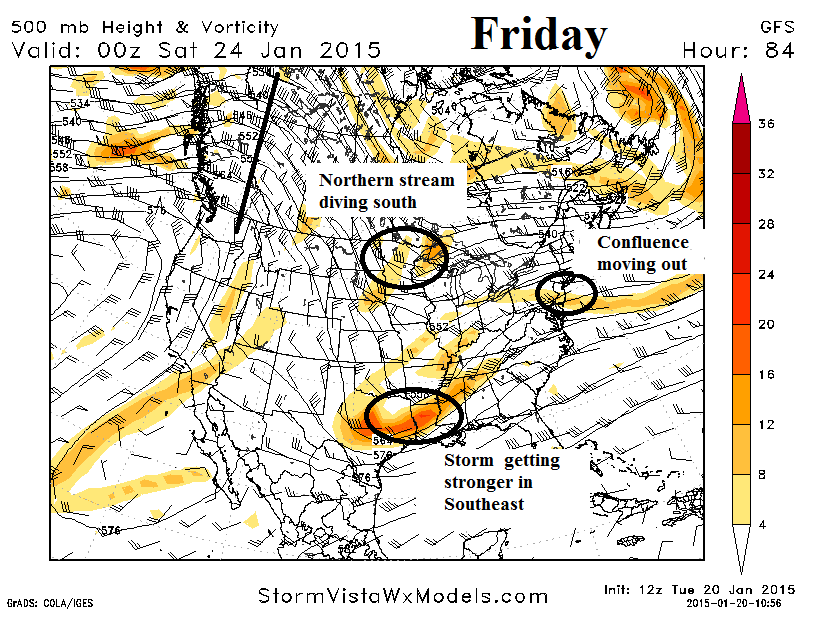 Fast forward to Saturday and you see the mean trough, or energy, settled over the southeast with northern stream energy getting ready to dive south. This is huge, because models were originally not showing much northern stream interaction. There's some confluence over the northeast getting ready to move out. The quicker it does, the better, so heights can rise along the coast. 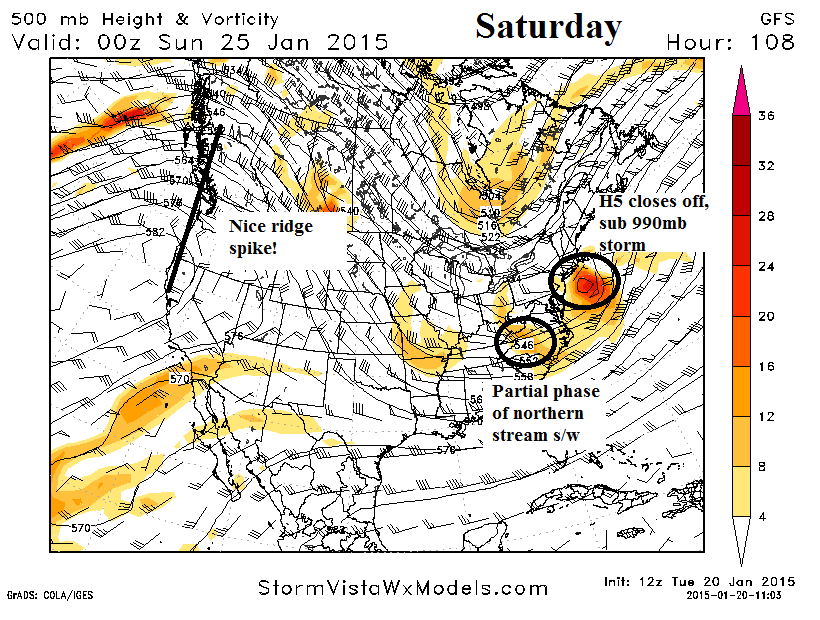 Saturday is the day this storm would hit. The GFS on this run did not complete a full phase with the northern stream energy into the mean trough, but there is some partial phasing that helps invigorate the storm. A full phase would bring out a stronger storm closer to the coast. Remember when the ridge collapsed on Wednesday? Check out how it rebounds by Saturday as the storm comes together. This is one of the big reasons why we're seeing northern stream s/w's get involved.

One other thing to note and I should have circled it is the other piece of H5 energy over Arkansas. If that energy amplifies too much, it may try to act as a "kicker" and keep our coastal storm further out to sea. Ideally we would like to see all that energy phased into the mean trough, but I do not think that will be the case. Instead, we have to try and get the southern energy to either slow down, or the northern energy to speed up. This actually has a good chance of happening because the northern stream this season has been pretty fast in nature, so the possibility of a full phase still exists.

The EURO model is a bit further east than the GFS, but not by much. The precip. shield is more expansive and the southern energy is stronger on H5. Overall, the end solution is quite similar. 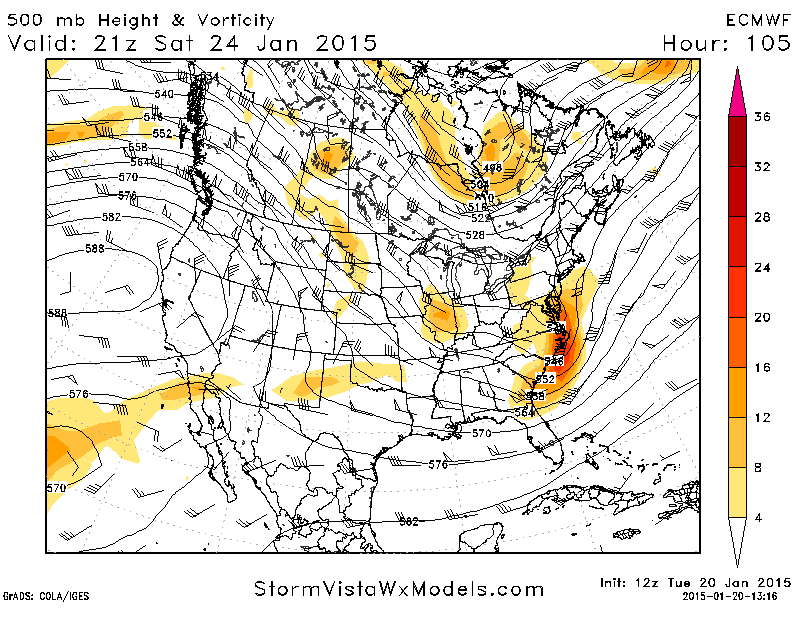 H5, however, is kind of different compared to the GFS. Notice how H5 never closes off on the EURO. The northern stream energy is also lagging further behind, whereas the GFS had some partial phasing. This is where the risk of an out to sea solution comes into play. If heights remain flat along the east coast and there is no northern stream interaction, the trough will not buckle and the storm is one for the fishes. Both major models are not showing this right now, but it's a solution STILL ON THE TABLE.

Personally, I think as long as we have that east-based block with an amplifying western ridge, there will be some northern stream interaction to one degree or another and we'll see some form of a storm off the coast. How strong it gets, what kind of precipitation it brings, and the duration all remain in question.

This was a quick look at the overall set-up. I'll be sure to keep you all informed with the latest trends.

Not sure I like this "Working Man" Frank with one update at night. Let's just take a collection and pay Frank for his input into the weather scene.

@devsman wrote:Not sure I like this "Working Man" Frank with one update at night. Let's just take a collection and pay Frank for his input into the weather scene.

I still like the mon-tuesday storm more than this one. Have a feeling this will be more wet than white along the coast...(Don't BAN ME). But Hopefully a day off for me is in the future.

Awesome Frank sounds overall promising like the tropics I hope to see that percentage up to 70% or higher tomorrow night lol.

shhh dev, any negative comments take to banter thread, i said something there too about bernie rayno latest video. This just a side note, and not that anyone even myself believes in the astrology but mercury retrogrades tomorrow and lasts for a while. This usually means chaos and today was a bad daycfor me (something that has never happened in 12 years of my work).

My friend who is very much into astrology (and it has oddly verified before, somewhat earrily) said in response to this Me: "do you think this mercury retrograde will give us the big snowstorm we are hoping for?" He said "if you want to be buried in your home without power, I would be prepared for the worst" (or the best in our view) lol.

I still like the mon-tuesday storm more than this one. Have a feeling this will be more wet than white along the coast...(Don't BAN ME). But Hopefully a day off for me is in the future.

Sorry for the Negativity Jman,,,it has nothing to do with this winter...it has to do with the fact I'm a south shore Long Islander. We always get the mixing down here.

true devs, Frank did you see the 50 stamp plots euro ensembles snow totals including both storms, some of them are outlandish! A day off for me wouldnt even happen with another you know who, my boss expects us to be in even when they call a state of emergency its rediculous and probably borders on illegal.

Said this the other day I like the 2nd wave behind this one for the Tuesday time frame all along - mature block, , more cold air, stj to work with and other variables.

hey mugs why not shoot for 2 godzillas in a 3-5 day period, when was the last time that happened, who knows maybe the second will be a roid, some of the euro ensembles have feet of snow by the 28th fyi.

@jmanley32 wrote:hey mugs why not shoot for 2 godzillas in a 3-5 day period, when was the last time that happened, who knows maybe the second will be a roid, some of the euro ensembles have feet of snow by the 28th fyi.

@jmanley32 wrote:hey mugs why not shoot for 2 godzillas in a 3-5 day period, when was the last time that happened, who knows maybe the second will be a roid, some of the euro ensembles have feet of snow by the 28th fyi.

Yes it is, not far enough out yet and not reliable at this range but still, and btw it has 4-6 tomorrow in southern jersey! 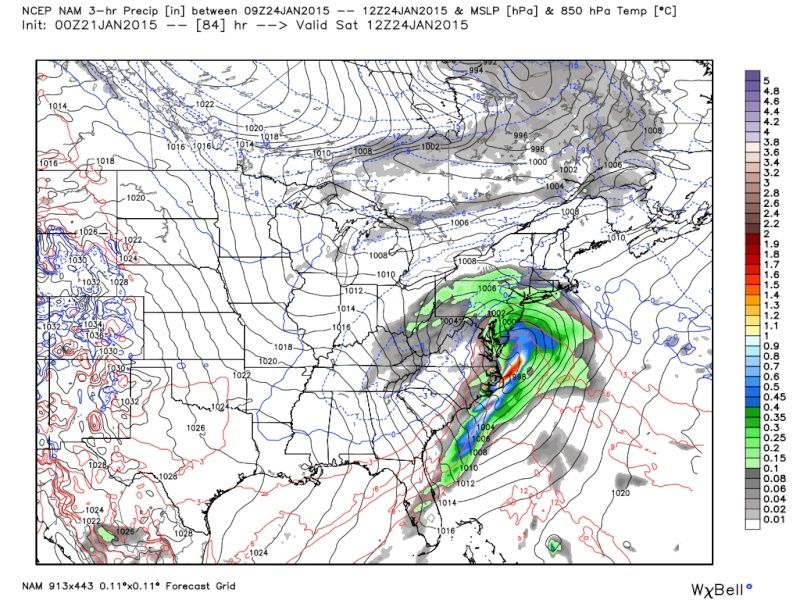 Nam is out of range. When is Euro and gfs

@jmanley32 wrote:Yes it is, not far enough out yet and not reliable at this range but still, and btw it has 4-6 tomorrow in southern jersey!

Southeast NJ may really over-perform tomorrow. History kinda predicts this too, with these sorta systems.

NAM is out-of-range but it's worth looking at. I really think this system will be a sloppy mess for many without any true inject of cold air. Not to say there can't/won't be accumulating snow. Just gotta watch that r/s line. JUST to the west of it will be the biggest totals. And then #1 passes to set us up for a biggie on Tuesday...?

You and the NAM should totally get it on Frank. It's so obvious your in love

Lol! I am just sayyyyyying, at least it doesn't show a miss or something. Read this on another site about it:

'The surface at KNYC is 32 at hour 84
If there was a next frame to the NAM
Everyone would be flipping back to heavy snow and blizzard conditions would occur all the way to the coast.
The NAM surges the 850's N but once that SLP gets to about Asbury the winds turn NE and the whole column collapses .
Look at the VV the system is a beast.'

soul I think both have potential to be big, but I am focusing on the first one as I am sure it will pave the way for what will happen on the 27th, the way the 24th storm deepens cold air will be crawn down by the system itself so I think onlt the very coast if at all will have some mixing.

You and the NAM should totally get it on Frank. It's so obvious your in love

Only European models turn me on.

soul what site was that, Frank any substance to what soul read?