In some places, it is still snowing, and yet we are once again tracking another POTENTIAL snowstorm for this upcoming Thursday. Having the day off from classes today gave me some time to analyze the significant differences between the GFS and Euro as they greatly differ on the evolution of this system. 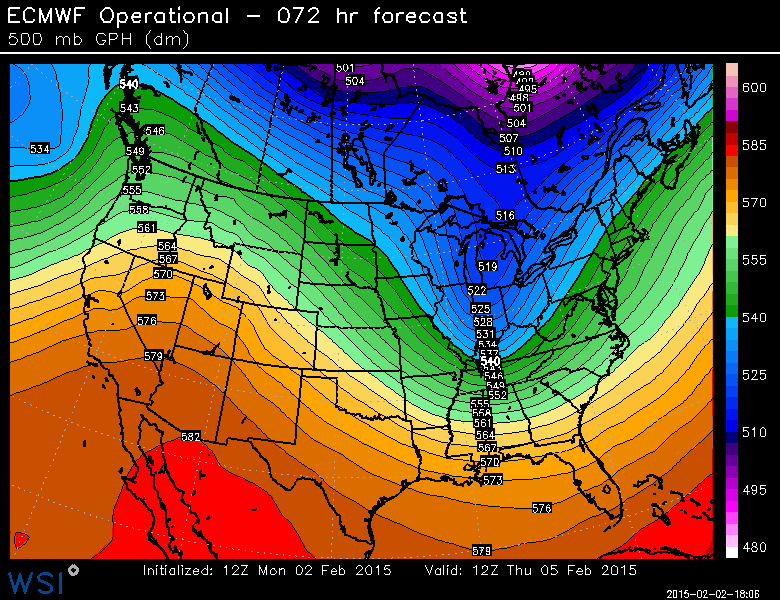 Here we can see the trough really digging as a clipper approaches from the upper plains. This intense digging with the trough due to a strong northern stream allows for this clipper to interact with southern stream energy in the gulf, thus resulting in a phase between the systems and eventually forming a LP off the coast yielding a modest snowstorm for the area. 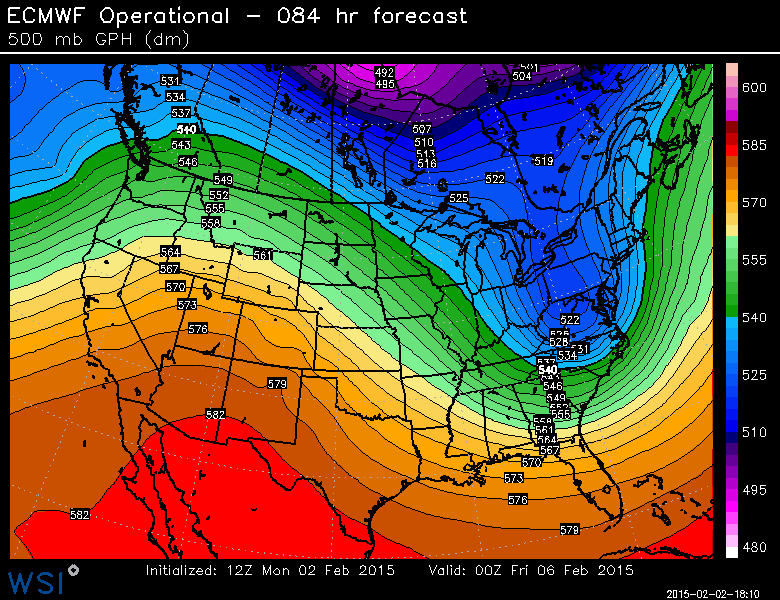 As the trough moves to the east coast and becomes negatively titled, the LP is able to ride along the trough and thus yield a snowstorm for the area. 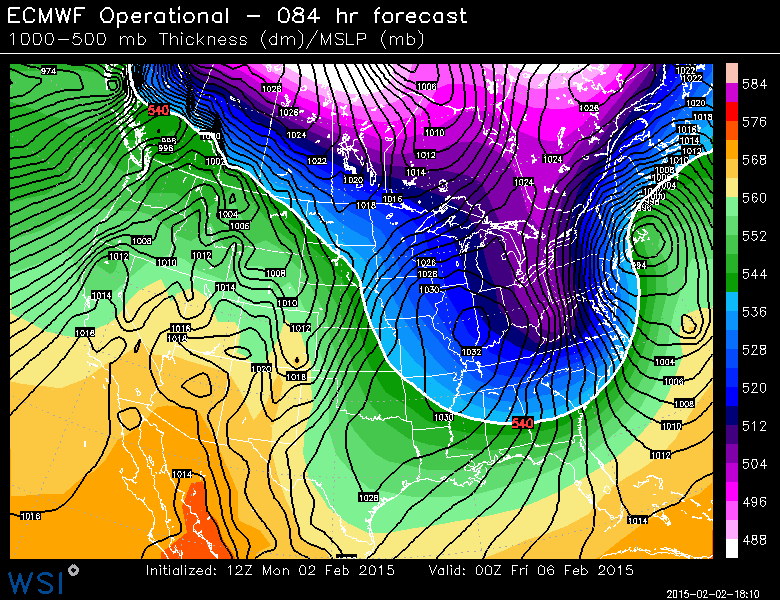 So why does the GFS have a "no go" for the area. Well let's take a look:
Here is the 500mb analysis from the 12z GFS. You can clearly see that the northern stream is far weaker, thus the trough is rather progressive and does not interact with the southern stream energy allowing it to scoot off the coast and develop far too late for our area. 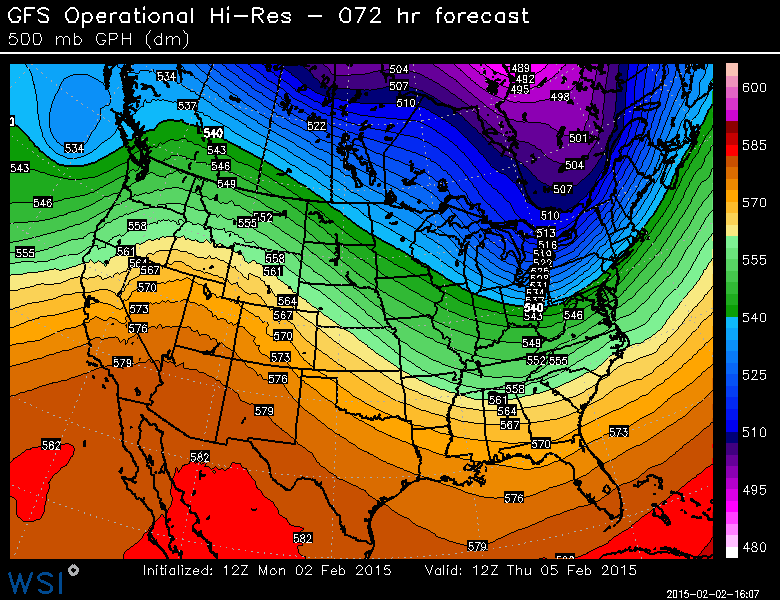 Here you can now see a disorganized elongated, undeveloped area of "lower" pressure well off the coast as a result of the discussed issues. 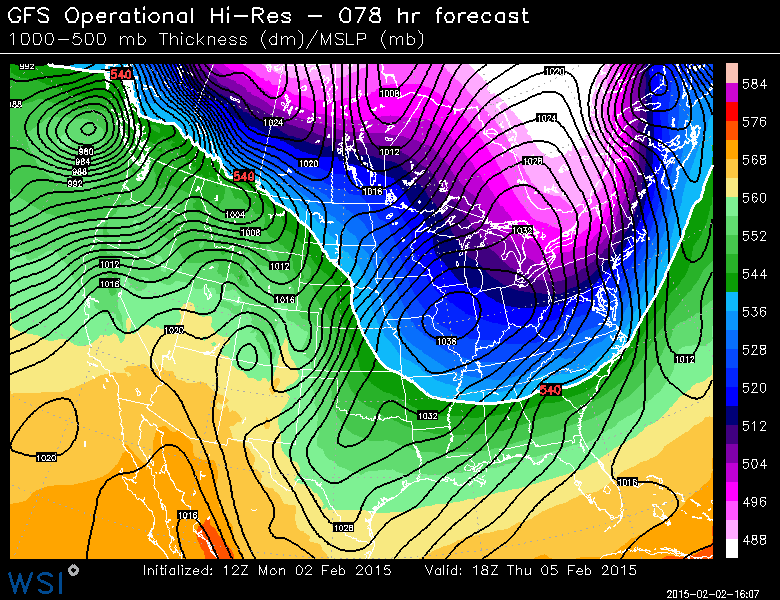 So what do we take from this? Well the forecast is very uncertain, but I do expect the GFS to trend towards the Euro on this one. This current pattern has suggested strong digging and strong northern streams and I don't see any reason for this to stop. Models tend to do better once storms move out of the area, so tonight's guidance should start some clear trends. My current thoughts would be 60% snowstorm and 40% no snowstorm. Temps and amounts would be worked out much later.

That's all I got for now. Wish I had more time to be more detailed, but that's the info we have now in a nutshell. I'm sure Frank will have a detailed blog out if need be.

Now that this storm is gone, I think GFS picks this up at 12Z tomorrow. GFS was showing a storm for that time frame last week. I think GFS does that alot. Shows storm...has it disappear, then reappears a few days before.

So is this storm potentially coming Thursday the 5th into Friday the 6th? Or Friday the 6th into Saturday the 7th?
Edit: Never mind! The threads were merged and the dates clarified :-) Thanks!

Who needs sleep, right? In the dead of winter it is fair game if you are a winter weather enthusiast. Our next threat comes this Thursday-Friday when another potent piece of polar energy ejects out of Canada and into the eastern CONUS. Current guidance differs on how amplified the mid-level trough could get. 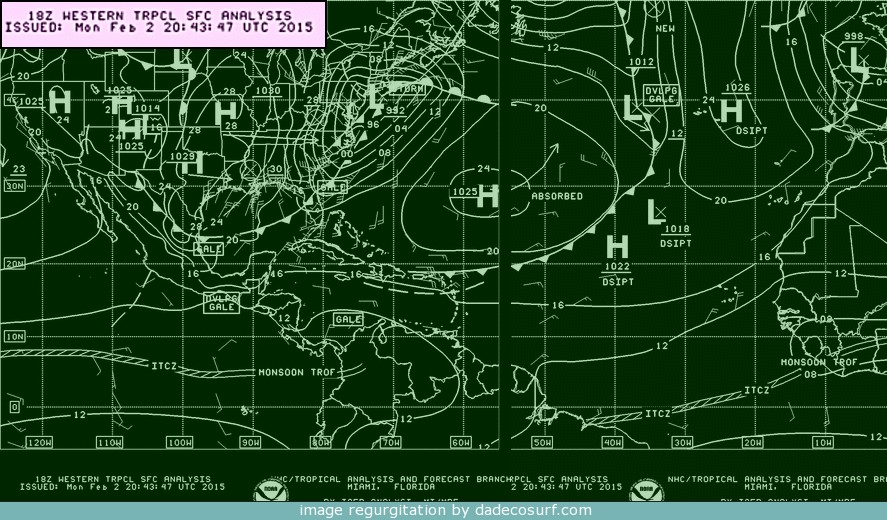 The arctic front is now off the coast. Temps will plummet into the teens and single digits tonight and cause standing water to rapidly freeze. The Arctic High's diving down into the center of the country are a direct result of the impressive pinched off -EPO over Alaska. We saw some this last winter too.

And it's not just the -EPO helping to configure our upper level pattern. The MJO since the last week of January has been extremely active. When tropical convection gets to or east of the Dateline, this usually signals for a +PNA and an active STJ. The last few storms we have seen have all come with some sort of southern stream energy getting involved in a phase with the northern branch. Clearly the MJO pulse is working in bringing our area storms. 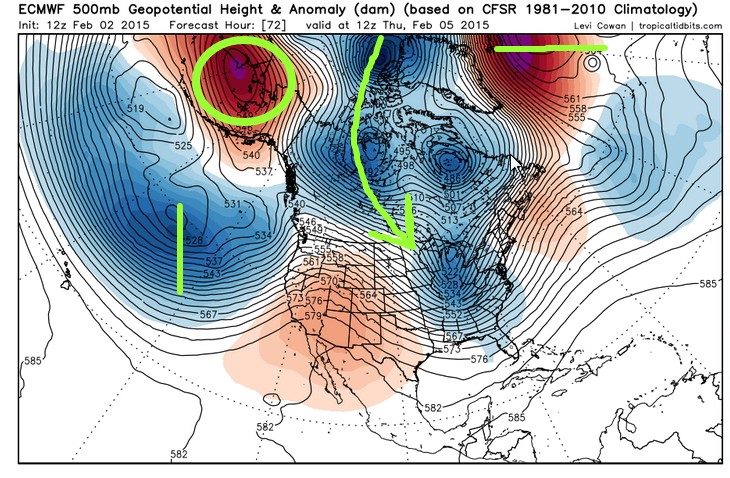 The current state of the PV is in flux. There are multiple Arctic Vortex' over Canada and the Pole that are being ushered down into the U.S. due to the strong -EPO. The large Pacific trough in combination with tropical forcing has consistently kept our PNA in a positive state. These ingredients coupled with some east-based blocking have given us enough for east coast storms. By Thursday morning, the 12z EURO has a nice looking mid-level trough over the eastern U.S. phasing with some southern stream energy. 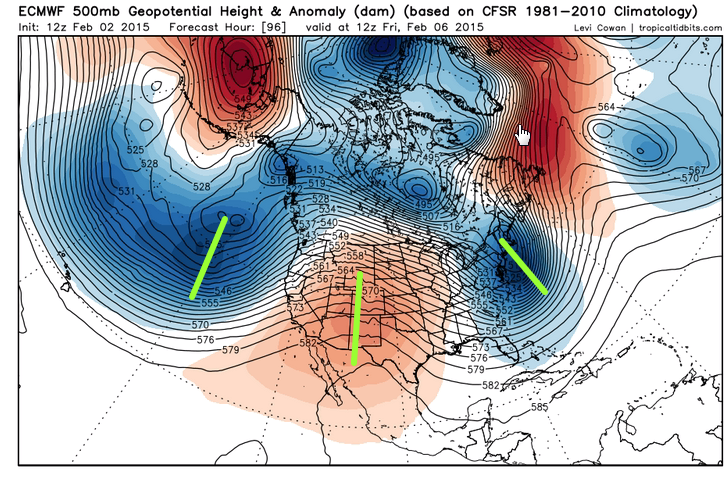 By Friday morning, this trough has gone negative off our coast and we're once again dealing with another coastal low. That is almost a picture perfect alignment of a Pac. trough, western ridge, and eastern trough. It's a great look on the EURO and would bring another sizable snowfall the our area. 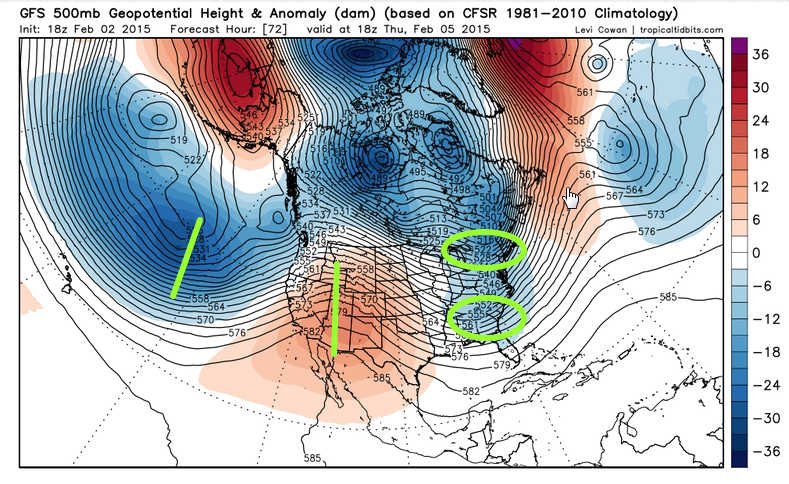 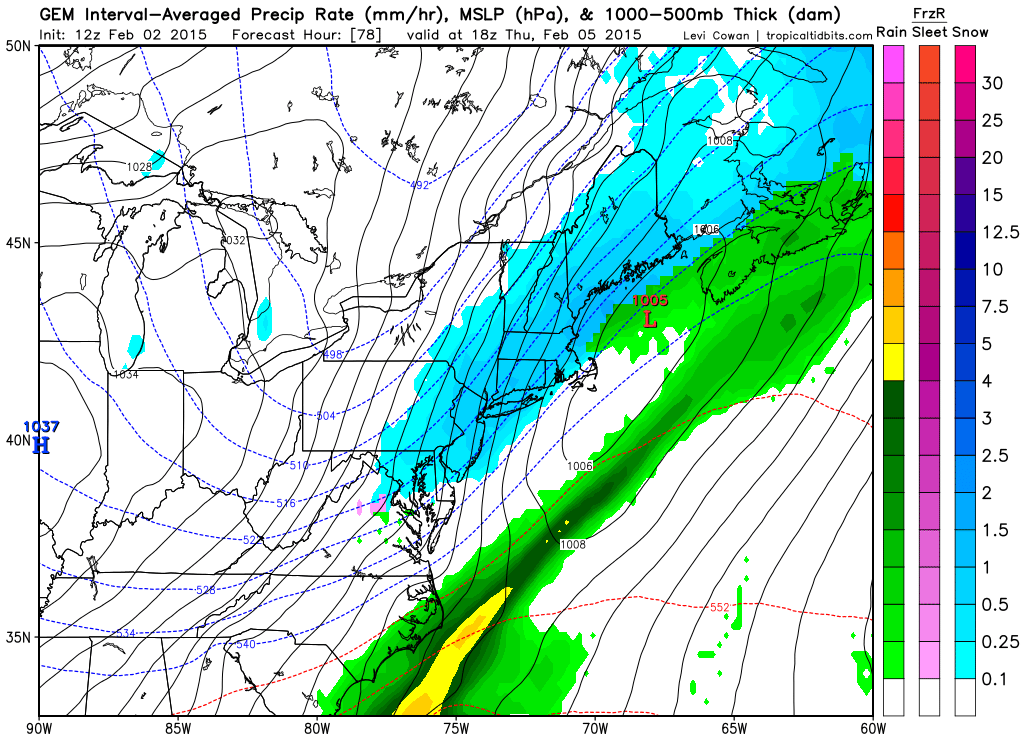 The 12z CMC does not look like the EURO, but it still bring a minor snow event to the area. It still digs the northern stream energy much better than the EURO but it's not phasing with southern energy. Instead, it looks more like an arctic front bringing 2-4/3-6 inch type of snows. This is another solution and one that actually makes some sense. The -EPO should allow the northern stream energy to dig much more than the GFS insists. Therefore, I do feel a CMC solution is more likely than that of the GFS.

Either way, I think we will see additional accumulating snowfall this Thursday into Friday. Could be minor, moderate, or heavy. Will depend on how the pattern comes together. But my gut is telling me to side with the EURO then the CMC. Put GFS last even though its been performing pretty well lately.

haha, thanks Frank. I knew you would have one coming soon.

The adrenaline is building again!!!

Mr G says this one could be significant. He did not say Gozilla though

@elkiehound wrote:Mr G says this one could be significant. He did not say Gozilla though

@elkiehound wrote:Mr G says this one could be significant. He did not say Gozilla though

I'm suing the first weatherman that starts naming snowstorms Godzilla. I started this 8 years ago.

Better patent it Frank, otherwise you have no recourse lol, I was just going to say I think we are the only ones who made up the cool name of godzilla, did not realize you did it so long ago you were a wee teen then : )

@amugs wrote:Devsman and all in the long range thread I posted the 19z gfs was about 150 miles s & e of the euro shocker it will come a round

@sroc4 wrote:Alex Dude!!  Great Write up man!!  That was like all growed up.  And yes I used growed up.  It was not autocorrected.  In all seriousness that is a great write up.  It's going to be fun to watch you get your learn on and see it translate on here.  That is unless you get all Cantore on us and become big time and forget about us.

haha thanks Scott! Well I do hope to become the next Cantore, but I will never forget all of you lol. When I'm on TV i'll have to have a rotation schedule with you guys to come cover the storm live with me lol! In the 7 online board I picked up a lot of knowledge from all of you. I owe a bit back lol

@amugs wrote:Devsman and all in the long range thread I posted the 19z gfs was about 150 miles s & e of the euro shocker it will come a round

They're running the GFS at 19z now too? Silly considering they have an 18z