Typically by this time of the Meteorological winter we have an idea of what the seasonal trend is like. Which areas are constantly getting hit the hardest in the northeast? I do not have to name the city that begins with the letter "B" to know where I am going with this. However, the pattern in my opinion still favors a strong storm sitting off the coast of New England. Here is why: 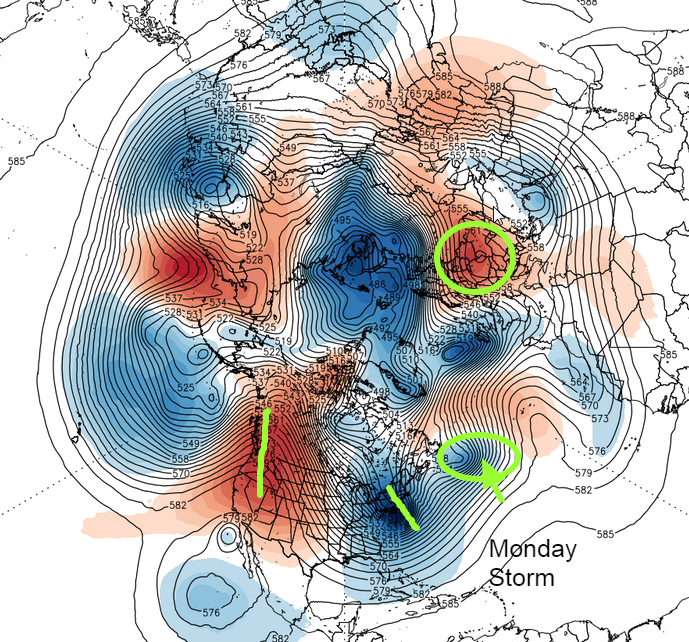 By Thursday night, the mid-level trough is going from neutral to negative off the coast of NJ. The H5 energy is consolidating at the base and a potent surface low is developing off the coast. Notice 3 key features (circled in green).

1. Blocking in Scandinavia. The higher heights in that section of the globe is helping to slow down the northern jet, however, that is a type of block that favors New England more than NYC. We want to see higher heights over Greenland, or a west-based block, so the trough can go negative sooner thus allowing a coastal storm closer to our coast. However, look at the dip in the jet stream due east of Maine. That is today's system! You also notice higher heights just south of Greenland. Those two features COULD be a reason why models are trending west with this coastal storm. Technically, that could be considered a west-based block even though it is transient.

2. The ridge axis in the west looks great. With an MJO in phase 8 we have favorable tropical forcing. Downstream, this allows the northern stream energy to eject out of Canada and dig into the eastern CONUS.

The combination of an impressive +PNA with blocking in the north Atlantic ARE the reasons why the Thursday system COULD come further west than where current guidance has it. 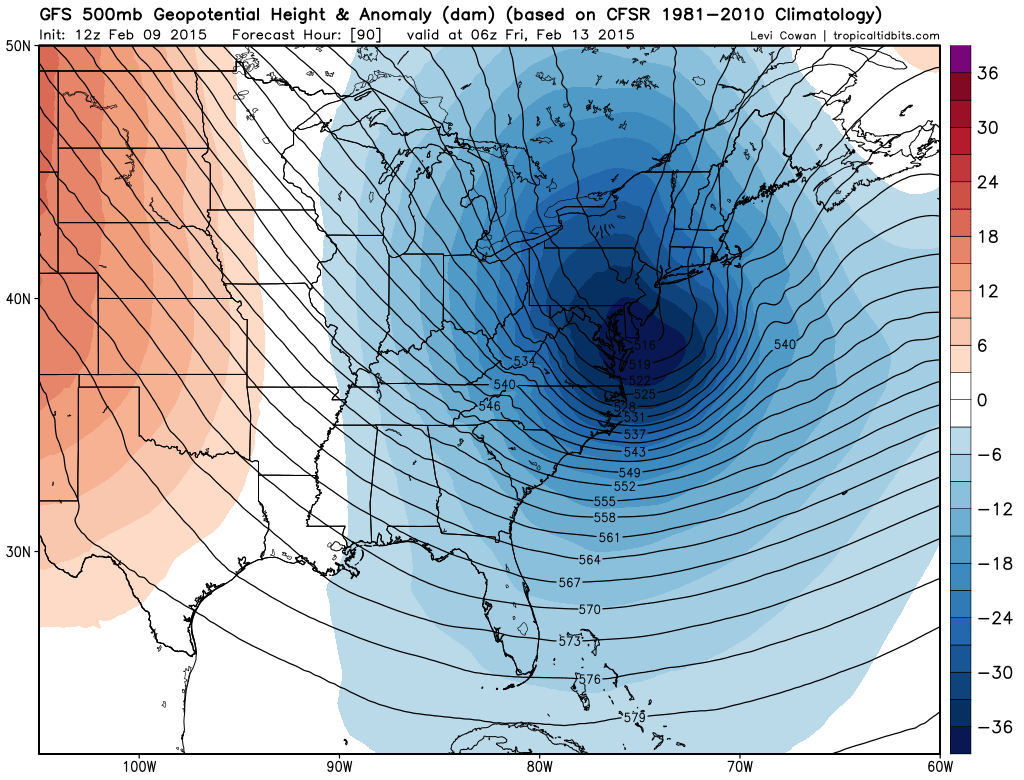 On the GFS, the trough is negative but H5 closes off just a little too late to benefit us with a Godzilla-type storm. Of course, it closes off in time for New England and that's because of the east-based block. Literally, this storm is just 6 hours too late from closing off at our latitude. 6 hours is nothing. And if the models recognize more and more the block in the north Atlantic in future runs, we'll see H5 close off at our latitude. 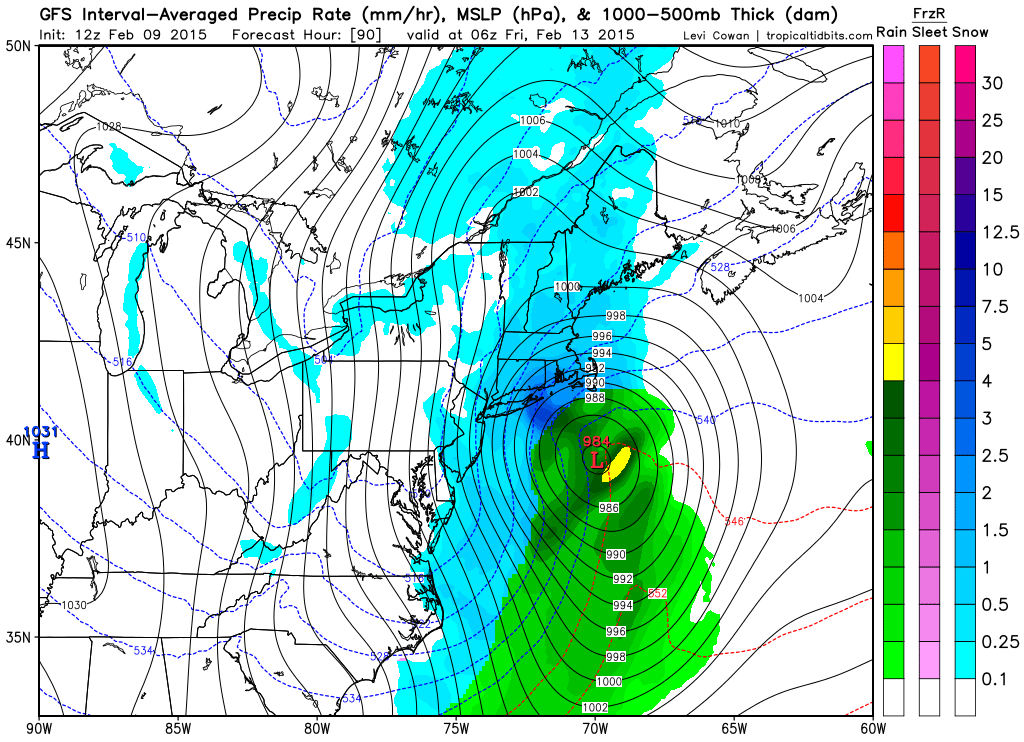 Here is the coastal system. At this point, H5 has just closed off but it's too late for us to bring us significant snowfall. BUT IT"S SO CLOSE. How many times have we said that in the last 2 weeks? Pretty often. 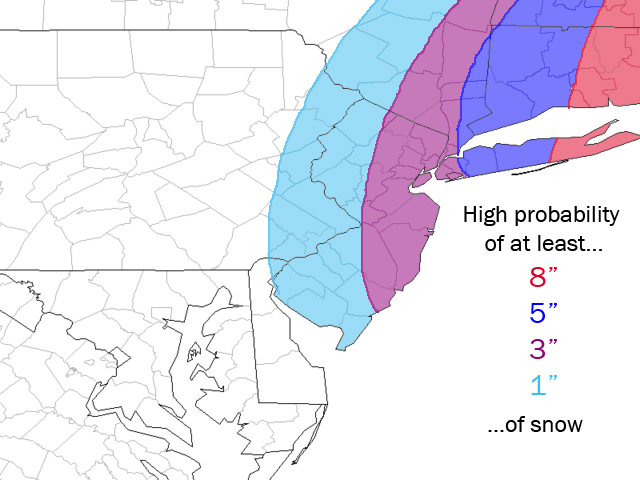 These are super preliminary thoughts based on probabilities. There is still a lot of model runs to analyze before we get to the end result and 1st call snow map.

It starts with the 00z runs tonight. Hopefully they recognize the block in the north Atlantic and trend even more west.

Hope so Frank. I know that 1 city has benefitted time and time again but it has to change at some point right??? That being said I'll take my "high probability" of at least 5 and sign now!!! I just hope it works out for ALL of us.

And I agree, let's do this! Come on west trend!

Anxiously awaiting 00z but I'm not going to expect anything but will b nice to see it go west even a little.

GFS is rolling. Here's to hoping for a continued west trend and other improvements.

How far off the coast was last run at 12z

Now we are still 3 days out so we have time

Close, but no cigar

On to the weekend.

Something that can cont to trend west or not really given the setup?

@lglickman1 wrote:Something that can cont to trend west or not really  given the setup?

What's with the EURO?

Ryan Maue has already written off the weekend threat too, not sure why just yet.