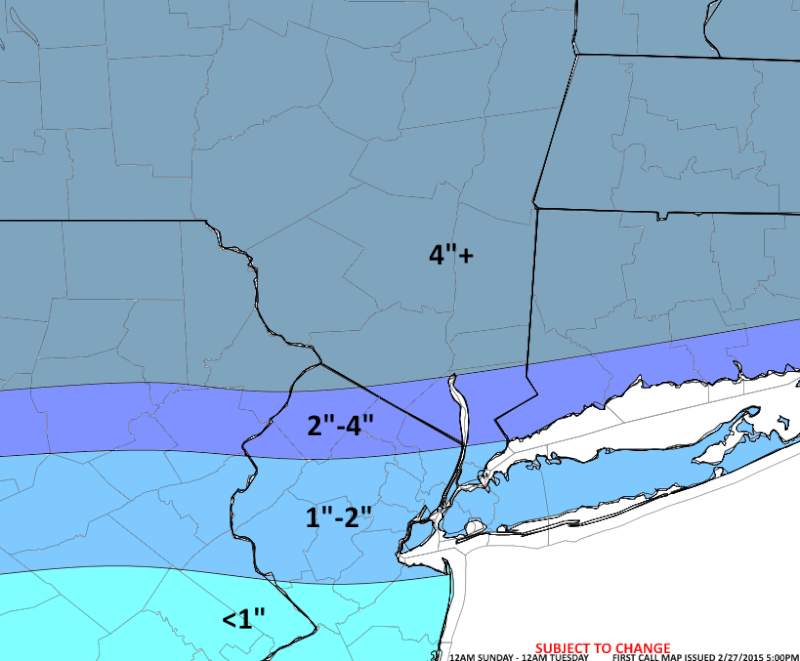 @amugs wrote:RGEM FTW! The RGEM is colder. SLP exiting to your S should mute mid level warmth.  .5 to .75 could fall as snow.

With more to go

yeah isn't that only 2am Monday?! Its going to snow much longer than that I think. I will be interested to see what this shows tomorrow, could be a lot.

look at how much colder than other models.

look at how much colder than other models.

Al I have a feeling although likely not anywhere near a MECS (nothings impossible though right heh), this still could def put down a decent amount of snow for us SECS maybe.

this map is what I mean when I say east of Hudson has best chance for 6" of snow.

jman I like our chances. we want slp to form south of us as per cmc, rgem, nam, wrf and ukie

Yes I know, I said I am staying conservative for now, I also said subject to change lol

hey snow just bring that 4"+ line down to the Bronx.lol

i'm going to trust the pattern more than models att, although unlike last sat system we have guidance backing up a 3-4+" snowfall for area. my guess att is 4" for a large part of area with 6" or so max north and north east from nyc.

I definitely think more in cnj I would say 2-4

@algae888 wrote:hey snow just bring that 4"+ line down to the Bronx.lol

I likely will, just remember that's only my first call map, not final at all.

Alex, what did I say a few days ago?? The models do not start to see the CAD, low level cold air which in this air mass is dense and a very good snow pack to boot until this weekend as we get closer.

Syo great point that most of the qpf falls at night and this will help with accumulations.

I am thinking right now 4"+ North of I80 and into the LHV - hopefully no subsidence or stupid dry slot with this.

As currently modeled, a changeover to freezing rain or rain from snow looks reasonable for the NYC Metro area Sunday night into Monday. Determining how much snow accumulates on the front-end whop before it changes over will be the tricky part of the forecast. Last event, if you recall, we also dealt with a changeover situation in the area but the air mass prior to the storm was much colder than what we'll see this weekend. That was probably a big reason why the front-end whop, specifically for areas in central NJ, was impressive. 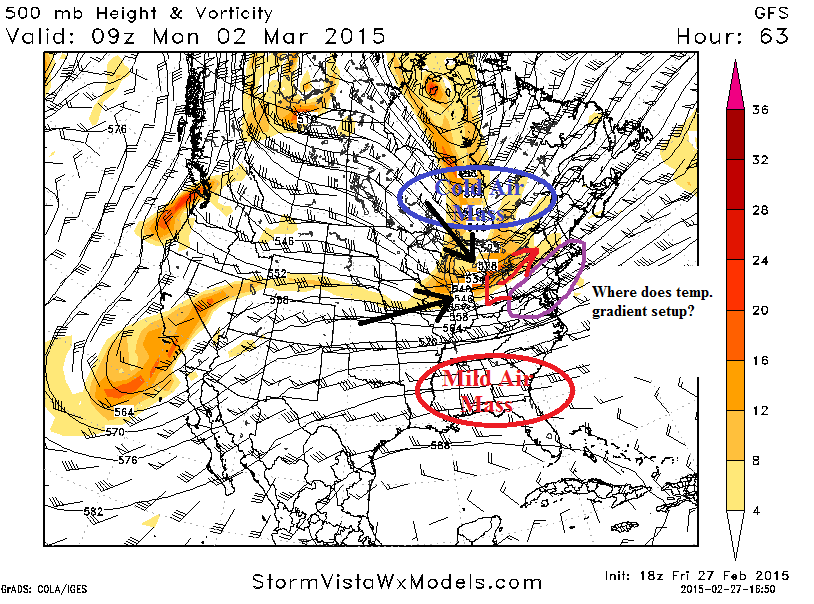 In this setup, a piece of s/w energy will eject out of the SW CONUS and interact with a shortened mid-level trough over the Great Lakes region to produce a surface low. That low, albeit very weak, is expected to track to our N&W early Monday morning. Once it gets into Upstate NY, that is when we usually start seeing warming taking place in our mid or lower levels of the atmosphere. The baroclinic zone is going to start off to our south and east but gradually make a push northward on Monday. How far north and west it gets remains the mystery. It's a classic battle between warm vs. cold air.

The GFS has a potent punch of moisture over the area early Monday morning, but this particular run presents precip. types issues for NYC. While the surface is below freezing, 850mb and 925mb are too warm. Here is H925: 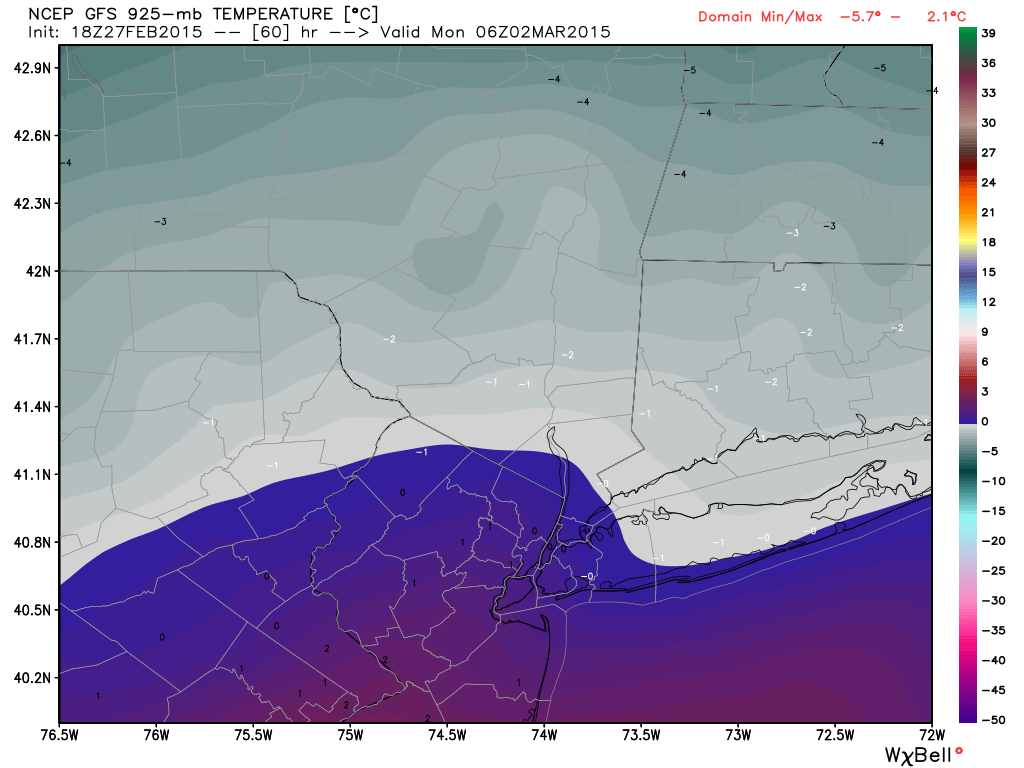 Good news is the surface low completely breaks down or tries to transfer energy off the coast, which allows temps. to crash again and possibly change some areas back over to snow.

The EURO shows this pretty well. After an intial period of probably some ice, there is a vast changeover to snow for much of the area by hour 69. Here is hour 72: 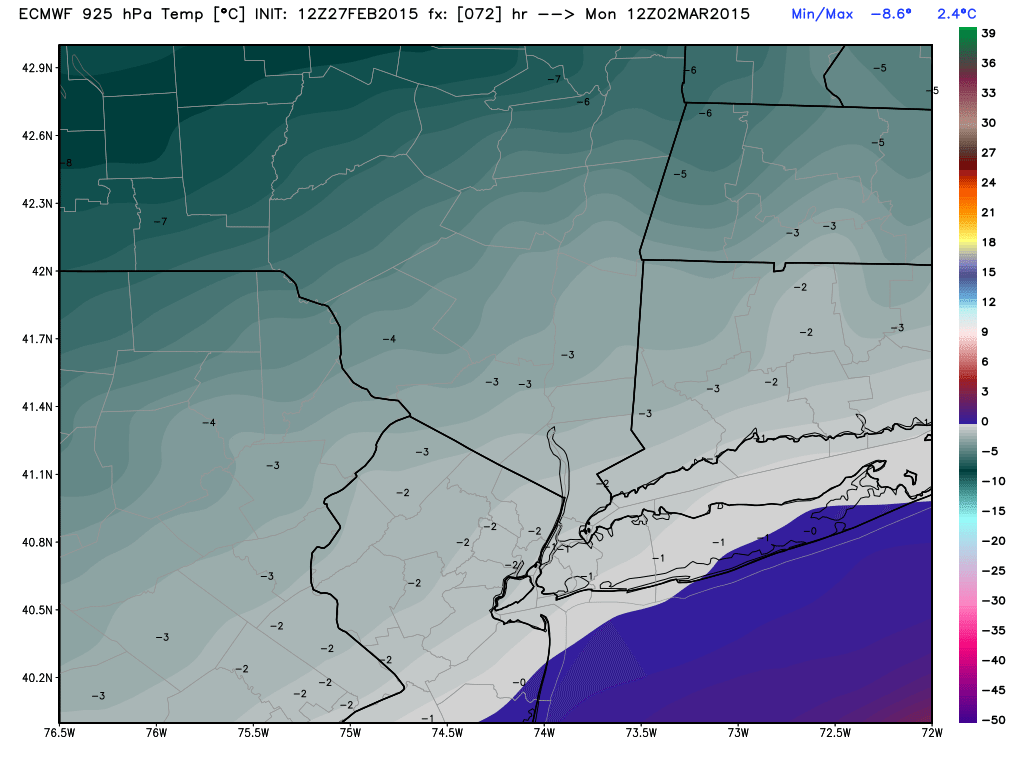 One reason why I have been saying expect higher qpf outputs on the models in the coming days is due to the positioning of the H25/170kt jet streak.

This should help enhance frontogenesis over the area for areas along the temp. gradient which could put down impressive snow amounts as long as temps. are cold enough. Clearly there is still nuances that have to be figured out. I do think given the vigorous -EPO and the recent trends on guidance with amplifying the mid-level trough that this storm could trend colder. Again, the air mass for this storm is not as cold as the last one but the dynamics might be arousing nonetheless.

Here is my 1st call snow map which is subject to change: 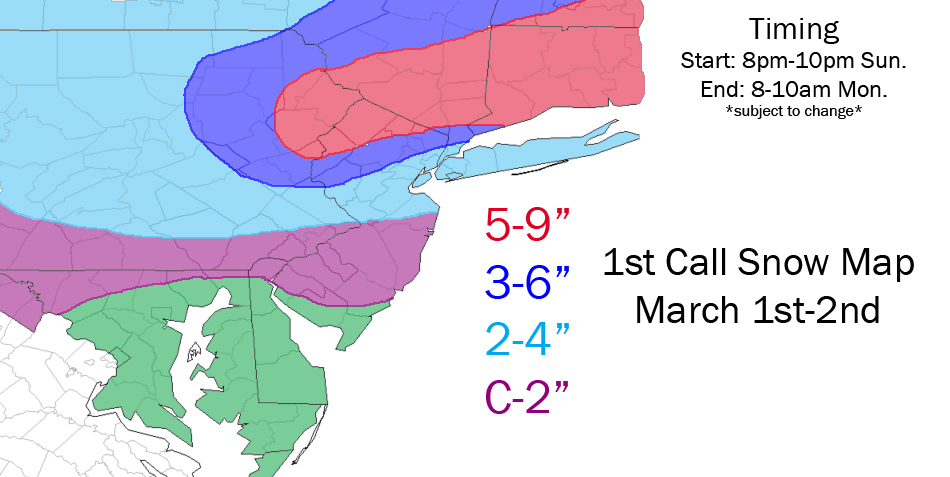 The 4km not a model lol has a real bad widespread frz with totals heading towards .5 at hr 57 late sun night and it's not fone. That's really concerning. Lucky it's still in crap land.

Hey docs i think that may go up a bit!

Yeah, jim, Frank has us 5 to 9 and I always go with his prediction first.Looks like the mid-week is slop-rain-slop followed by another cold snap.46 degree high for wednesday!!!

Doc your the bullseye. Get ready for 8" Your a lock

One thing to keep a keen eye on is secondary coastal development with this thing. A good portion of the SREFs are now hinting at this (as was the RGEM and NAM, I believe I remember either Al or Mugs saying earlier), and if this occurs, those of us further north and west can expect to get shafted AGAIN by the dry slot that develops from the coastal transfer. Those near NYC and points east would cash in if this were to happen, because not only will it develop a northerly component in the low-level winds, and thus, a colder flow beneath the warm advection that is occurring above it, but it will also act to enhance the ascent in these regions via convergence and stronger upglide. This would lead to heavier precipitation rates. We will have to see how it goes, though.