A potent piece of Pacific energy is going to track across the country to our area and bring with it a swath of moderate to heavy precipitation on the northern side of a low pressure system.

The -EPO, PV over the Hudson Bay, and deep cyclone over southeast Canada creates plenty of confluence for cold air to stay locked in while this storm moves in. As the Pacific energy tracks east, it deepens as it does so thanks to the cut-off Baja upper low in the SW CONUS helping to feed in Gulf moisture. Once again, we are dealing with a setup with a storm stuck between the SE Ridge and intense confluence to our north. This creates forcing, or frontogenesis, in our atmosphere which allows moisture to spread northward despite the track of the surface low being well to our south and east.

The greatest lift according to the GFS will be concentrated over eastern PA and NJ. NYC/LI also see some, but it's not to the same degree as the areas just west. Nonetheless, this is still impressive to see for this time of year. As always, those just north of the temp. gradient will see the highest precip rates.

That said, given the time of year climatology does play a role. While it may be subtle, the models are not as cold as some people may think they area. 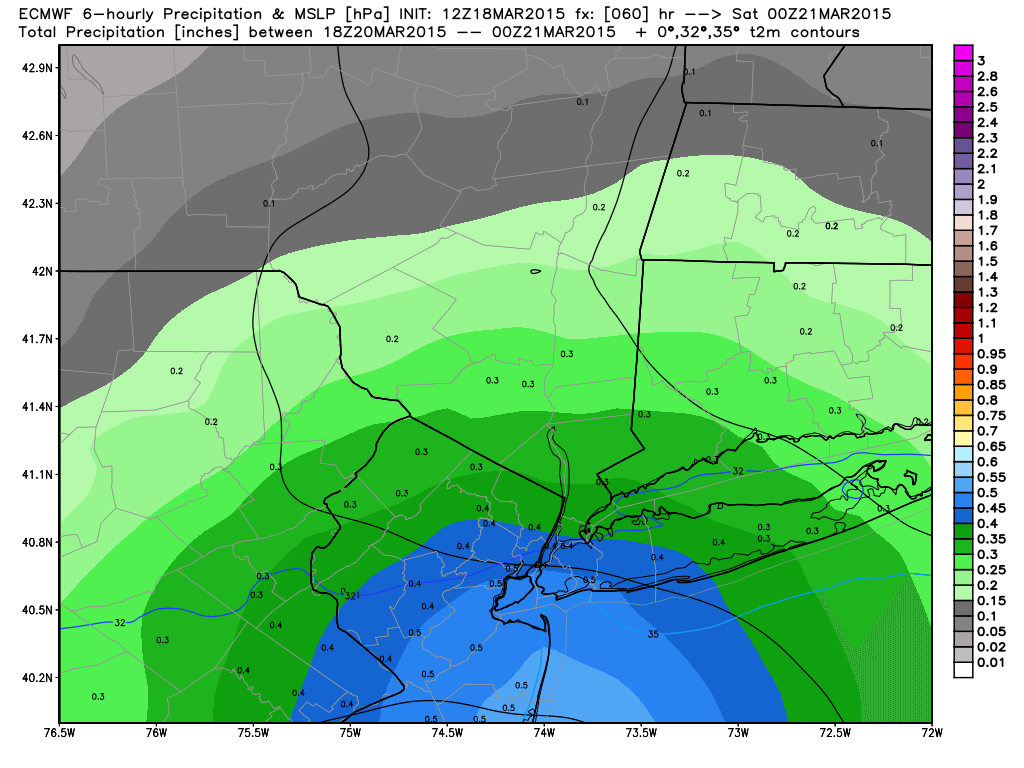 The 32-degree surface line is shown to be north of NYC and most of LI when the heaviest precip moves in 4pm Friday. That does not mean it's not snow, but I do wonder whether or not this will actually be sticking considering the surface temps and the fact that it's falling during the day when March sun angle could inhibit "stickage."

Likewise, the GFS is also shown to be warm for eastern NJ, NYC, and LI at the 850mb level. 925mb is cold, though, but I would have to believe some rain or sleet is still mixing in with the snow with 850's being warm. Especially considering the heaviest precip is forecasted to fall between 1pm-6pm. The timing of this storm comes at a bad time for snow lovers.

So, while we may have an "ok" H25 jet streak, decent frontogenesis, and potent H5 energy...we have unfavorable timing and climatology against us.

Besides the Jersey Shore, the 00z NAM is cold at ALL levels and would surely support accumulating snowfall for most. In terms of surface low track, it's a bit of an outlier at the moment and it's not a good model to begin with, so take it with a grain of salt.

I think what this boils down to is how vastly and to what intensity the precipitation falls, and how long surface temps. can remain below freezing. I do think grass / colder surfaces will have more snowfall accumulations than paved roads. I do not see the snow instantly sticking as it falls to those surfaces.

That said, here is my 1st call snow map. I would subtract a couple of inches (maybe more) if you are curious to know just about the main roads. I will have a final call snow map released by tomorrow night. 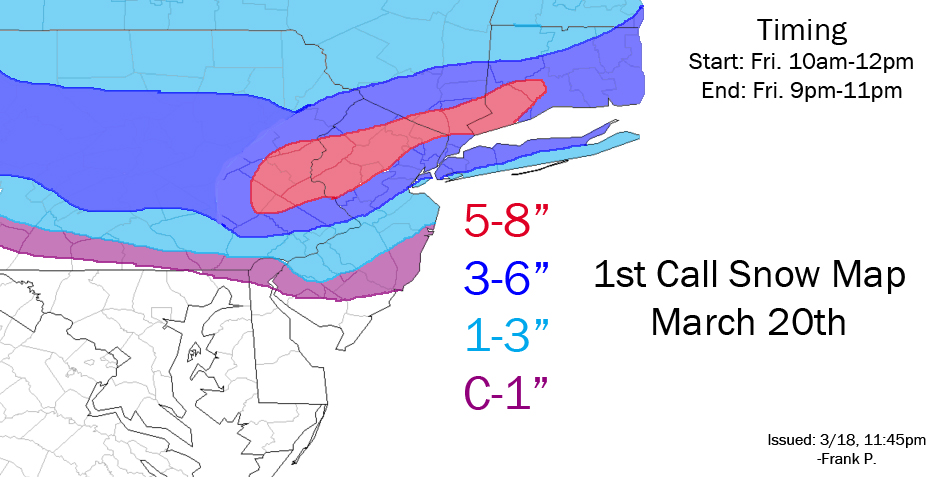 Great write up Frank and also great to see that we somewhat agree with each others first call snow maps.

Very sorry for your loss.

Sorry to hear about your Family's loss, Frank.

Accuweather showing 0% precip on friday for me now.

Accuweather back to 1 to 3 inches for me.

Frank, sorry to hear about your loss.
Does anyone have an idea when this snow event will start. I have a doctors appt. at 10:00am in Parsippany NJ. and I'm not sure it I should cancel it or not. I'm just wondering what the roads will be like at that time. Thanks.
Frank, I can't see your snow map, but the other maps you posted are there. Strange.

Sorry for your loss Frank.

So weird how Upton has a small blob of 4-6 inches in the NW quandrant of Suffolk county. I'm in that blob 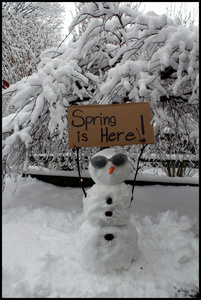 First off I'm so sorry for your loss Frank.

Frank sorry for your loss. It is never easy and hang in there. Family and friends being together helps during these difficult times.

Sorry for your loss Frank, glad you could be with your cousins… Thanks for a great write up as usual

My sincere condolence Frank. My thoughts and prayers are with you, your families and friends.

The GEM-LAM is outputting high qpf amounts...very impressive. GFS is not far behind either. 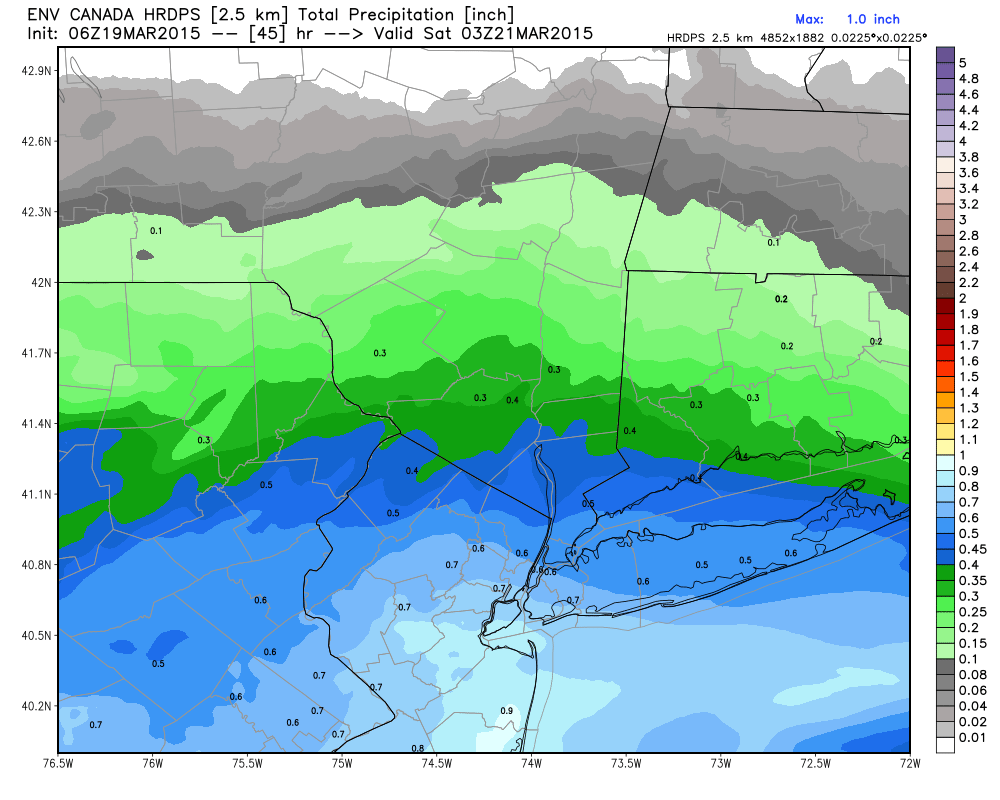 The 6z NAM has a lot of trailing H5 energy coming across the area Friday. Impressive H7 VV's as well.

Frank - condolences to you and your family...

Frank sorry for the family loss, its always hard. Great writeup and loving the last two maps, hoping I can get 3+ out of this, even on grass only still counts towards yearly total right? : )

WOW at the latest SREFS

Bu how much of that QPF is accumulating snow....need to wait for that

All important factors this time of the year.

jmanley32 wrote:Frank sorry for the family loss, its always hard.  Great writeup and loving the last two maps, hoping I can get 3+ out of this, even on grass only still counts towards yearly total right? : )

Only if you're the CPK zookeeper do you total what accumulates or better yet doesn't accumulate on a warm pavement. Measurements are suppose to be taken on the coldest surface, ex- a snowboard, where the snow accumulates first. If you don't have a snowboard then dirt or low lying grass in a shaded area but not underneath anything like a tree is your next best thing.

Bu how much of that QPF is accumulating snow....need to wait for that

Pretty much a safe bet here that everything 25 miles north and west of NYC should be accumulating snow at the very least on grassy surfaces. Personally I could care less if it accumulates on the roads.

4 to 6" easy on colder surfaces and a slushy 2 to 3" on paved surfaces mainly after dark. ALL MELTS ON Saturday, BUT STILL A NICE TREAT!!!