MJO has played a major role to this point

MJO has played a major role to this point

It has been noted in the past that the MJO does not typically have a very strong influence on the overall pattern during El Nino years; however, this year is not your daddy's El Nino.  You may have heard in the past, I know Frank has mentioned this on several occasions, we really have not seen a pattern that coincides with how El Nino years typically go.  Why is that?  Well the short version is the strong  MJO pulses have played a very large role, but not exclusively.

I wont get into great detail on this, mostly because I am still learning this, but the QBO up until recently has been in an unfavorable state to allow the stratospheric vortex to warm, weaken and ultimately have any real affects on our sensible weather.  We have all learned over and over this past month or so that the Stat Vortex has been one of the coldest and most tightly wound ones in recent history.  This has led to a very positive artic oscillation, which as we know tends to tighten the noose on the arctic air masses keeping them bottled up in the northern latitudes.  I have a theory on why the strat vortex has been so anomalously strong this year.  Simply stated when you look at the SST globally the vast majority of the major bodies of water have been anomalously warmer than normal.

The Indian Ocean (which will lead me into the MJO discussion in a moment), the tropical pacific(well duh one of the strongest basin wide Ninio's on record), the atlantic oceans to name a few.  We all know that momma nature tends to balance itself out.  So if we have such anomalously warm conditions along the equator, it only makes sense that we have the opposite anomalous conditions somewhere else to balance things out.  Its not as simple as that but I think you see where Im going with this. Anyway moving on.

Lets revisit this statement from above.  (we really have not seen a pattern that coincides with how El Nino years typically go).  The SST in the tropical Pacific lead to a large scale air circulation called the Walker Circulations.  I suggest you take some time to read about it here: https://www.climate.gov/news-features/blogs/enso/walker-circulation-ensos-atmospheric-buddy.

These three images show where the main areas of rising air and corresponding deeper convection should be along the tropical Pac due to where the highest SST anomalies are during El Nino, Neutral, or La Nina conditions and the corresponding areas of sinking air which suppresses convection. 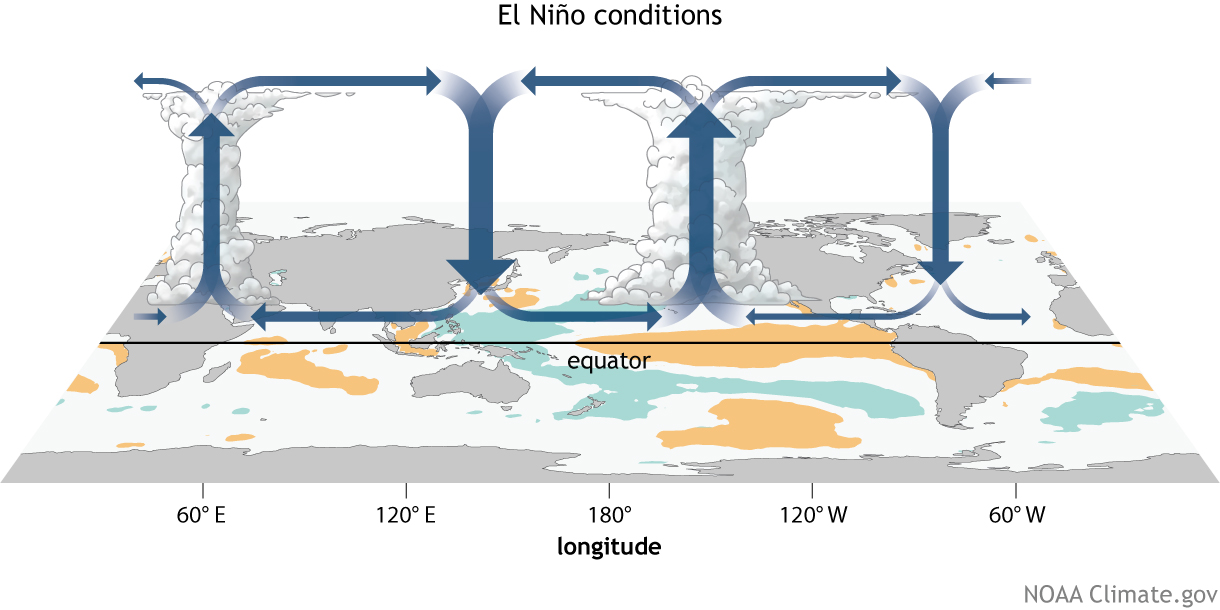 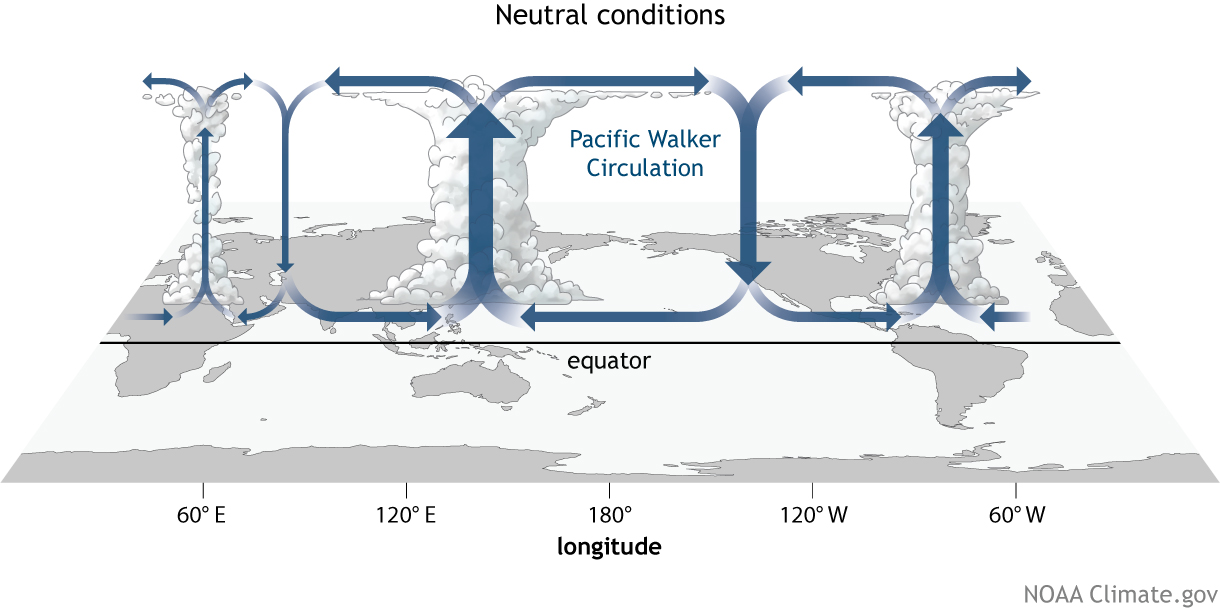 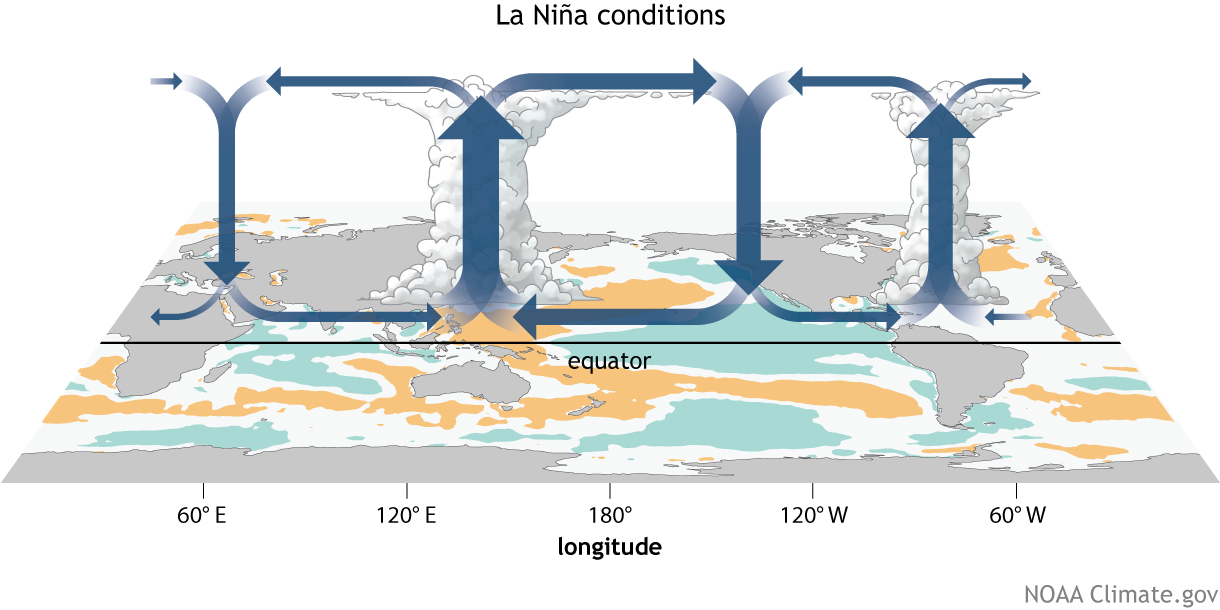 Here is where the MJO comes into play.  If you are still a little unfamiliar with what the MJO is ,and how it works refer here before reading on: https://www.njstrongweatherforum.com/t511-what-is-the-mjo-really

I know Frank for sure, but other well educated weather peeps have noted that so far, this year has acted more like a La Nina year than an El Nino year relative to the overall pattern and esp the behavior of the STJ.  The reason in large part is that the anomalously warm Indian ocean has supported strong MJO pulses that have traversed through phases 3,4,5,and 6 since late Nov and all of Dec which has directly disrupted the normal Walker Circulation of a typical El Nino year. 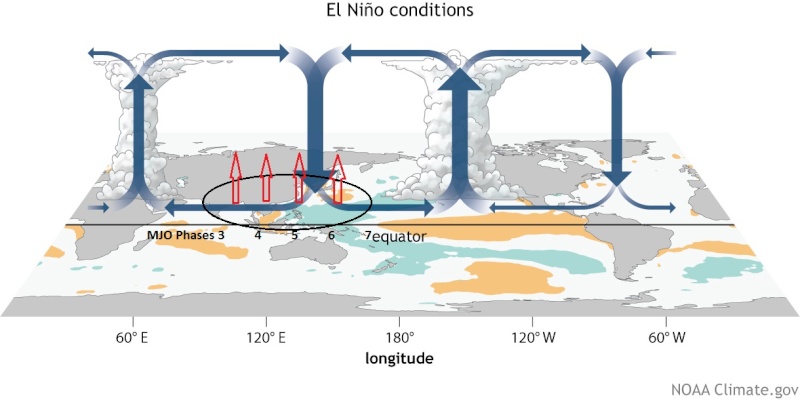 Leading to a Walker circulation much more typical of a La Nina Year when looking at where the strongest Convection is located in the Trop Pac. 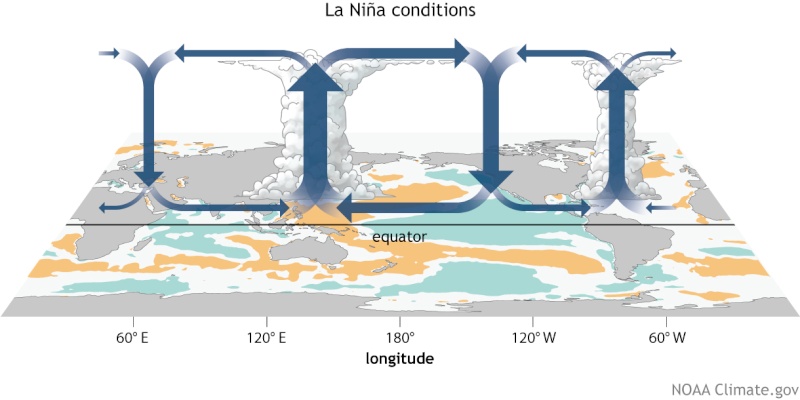 Here is the Current MJO forecast via the Euro, GEF, and CMON:

First lets just briefly look at where weve been followed by where we are, then where we are going.

Where we have been.  This next image is an OLR(Outgoing Longwave Radiation) Map.  Simply defined areas of blue/purple indicate where enhanced convection is located.  The X Axis indicates the longitude, and the Y axis indicates time.  Notice there has been enhanced convection directly corresponding to phases 3 4 5 and 6 beginning in Nov and slowly traversing east throughout Dec.

You may have also noticed that there has been areas of convection located at or around the date line(180).  This convection has been a direct result of the Nino; however the atmosphere has not responded to this area of convection, but rather the convection to the east associated with the MJO in phases 3-6.  The result has been exceptionally warmer than normal temps for Nov and Dec.  Notice; however, that the area between 0 and 150E, right along the bottom of the OLR image above, there is no more cool colors.  Also notice how over time the area of convection between about 150E and 120W is expanding and growing stronger.  This is a direct observation of the eastern phases of the MJO finally coming to a close and tropical forcing will now get organized around the dateline and in line with the MJO forecast in the 8-20 period and should start enhancing our pattern for the better.

Here is a sat image of the direct observation of how the trop Pac in phase 6, which is where we have been for the past week or so, is enhancing the polar westerlies, and ultimately our pattern as a whole. 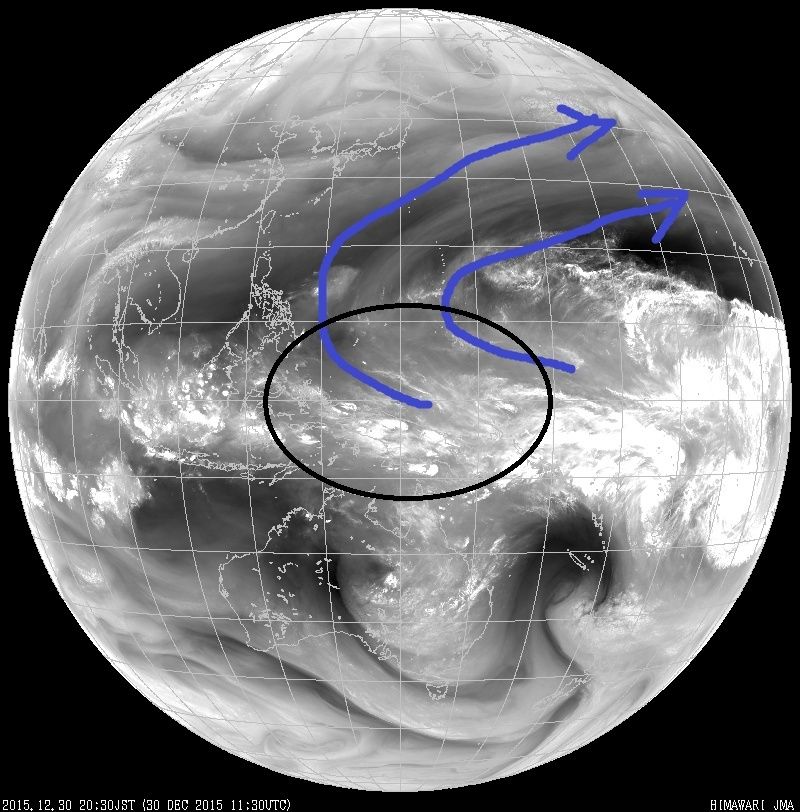 You can clearly see that MJO pulses in  phases 3-6 correlates to above normal temps in all of these phases for this time of year: Also notice how the temp composites for phase 7 for November, Dec Jan(NDJ), yield colder than normal tendencies in the east vs the composites for DJF phase 7 looks warm. 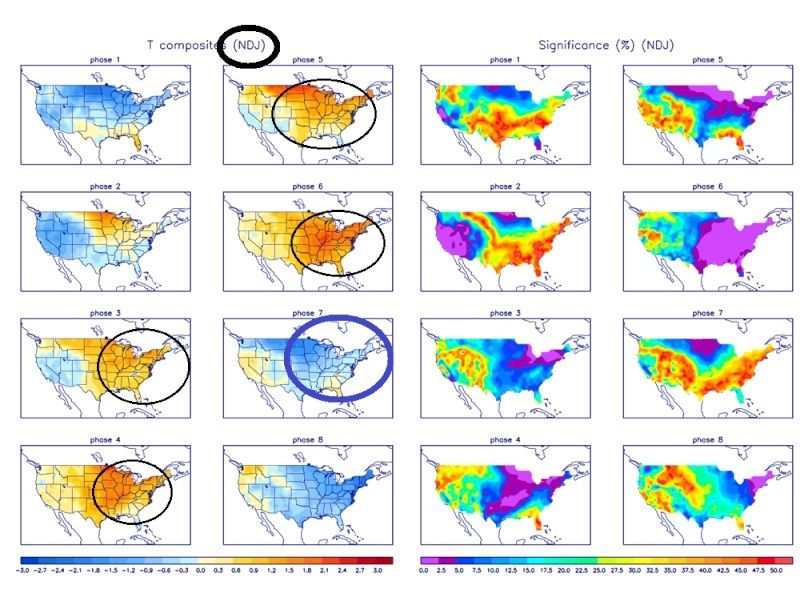 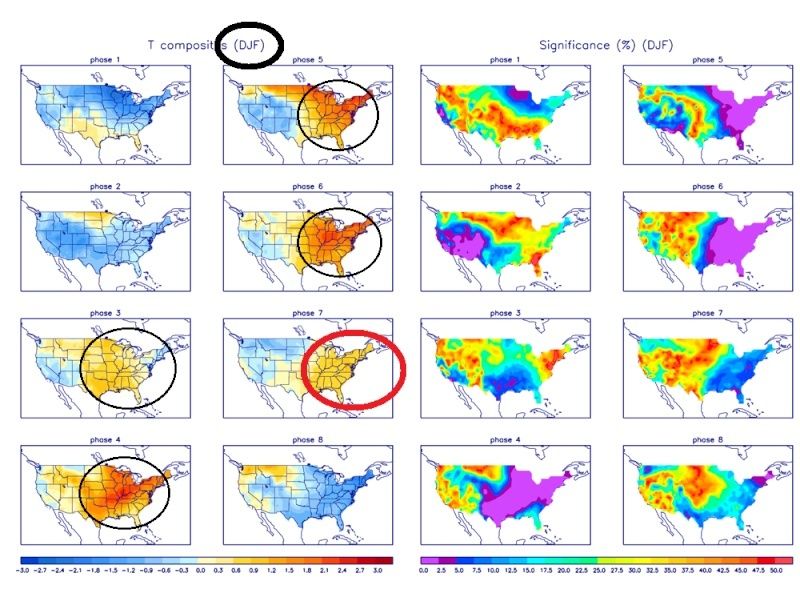 Over the next 7 days we will be traversing through phase 7 into phase 8, 1, and 2 by the 8-20day period which are cold phases. 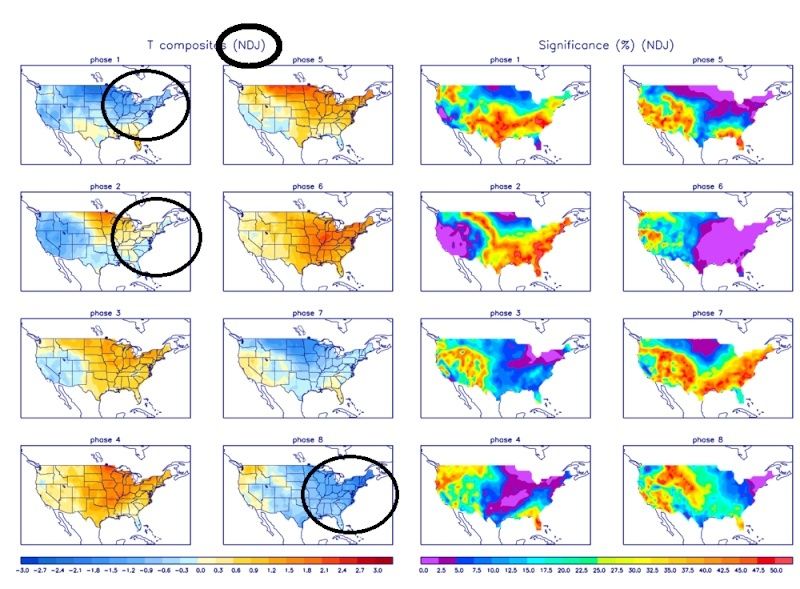 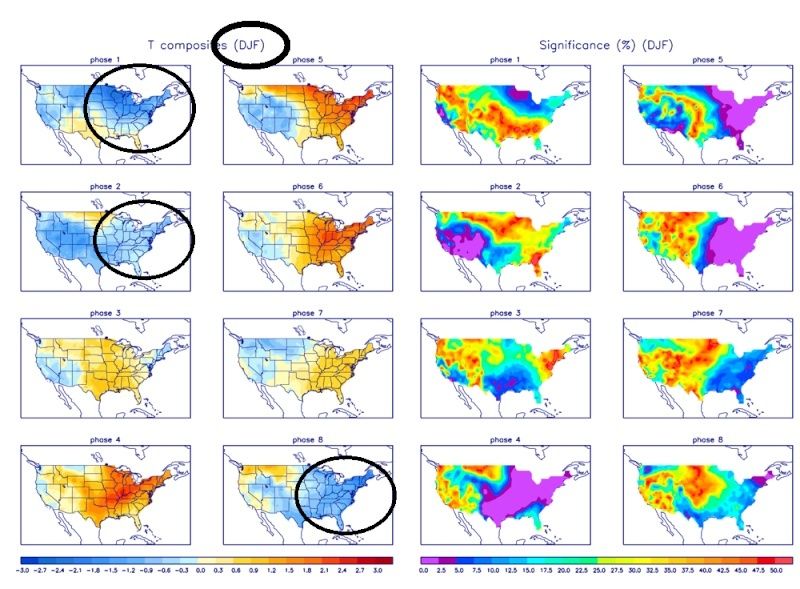 If you go back to the Sat images above you will notice that although the atmosphere is behaving as if we are in phase 6 the most prominent area of convection is to the east.  Also remember that the trop Pac as a whole is not a very well sampled area in terms of weather stations etc.  Therefore; you MUST anticipate the operational models will be ALL OVER THE PLACE, beyond day 7 because there is simply too much going on.  We also must take into consideration the Start forecasts.  That area as well is not the most widely sampled area so again there is a ton in the LR that models need to digest, and a definite lag time or catch up period should be anticipated regarding how and when the, operational models esp, will pick up on where this pattern is really headed.  I know its been hard to do, but continued patience is a must right now as we are clearly beginning the step down process in the reversal of our pattern.  Current observations, and NOT modeling, is right on track with what guys like Frank, Earthlight, Isotherm, LC, JB and others have been preaching about how this pattern will progress in Jan.

On that note...HAPPY NEW YEARS TO MY FELLOW WEATHER NUTS

Good write up sroc. You have some board members looking at the OP runs and saying "what pattern change?" Everyone:FOLLOW THE ENSEMBLES!!!Often the OP models cannot grasp when there's an imminent pattern flip. Too many moving parts. Relax everyone. If anything, the EURO ensembles have come in colder.

This is Scott's best write-up since Iv'e known him. I think everyone should take the time to read his blog. He has tremendous knowledge of the MJO and how it corresponds with our weather patterns around the globe. Well done.

It really amazes me sroc your knowledge on weather. Enjoyed the write up easy to understand with great illustrations.

@skinsfan1177 wrote:It really amazes me sroc your knowledge on weather. Enjoyed the write up easy to understand with great illustrations.

Thanks Skins.  I really appreciate it.

Scott great write up as always. Question. are you concerned where the Euro takes the mjo heading into February? it looks to be going into Phase 3. what are your thoughts?

@algae888 wrote:Scott great write up as always. Question. are you concerned where the Euro takes the mjo heading into February?  it looks to be going into Phase 3. what are your thoughts?

Good job sroc. LI proud. I can only hope that with the cold we look to get the next 2 months that we have the same amount of precip. we had in December when it was so warm. I received 5.45" this month. Verbatim with a 10:1 ratio that would be 54.5" of snow. WHAT DO YOU THINK?