Just how I started Update #2 I will start Update #3. I am NOT yet forecasting a Godzilla for our area. We need to see considerable changes over the next 48 hours if we are to see a storm of that magnitude. 48 hours is plenty of time for change to happen. 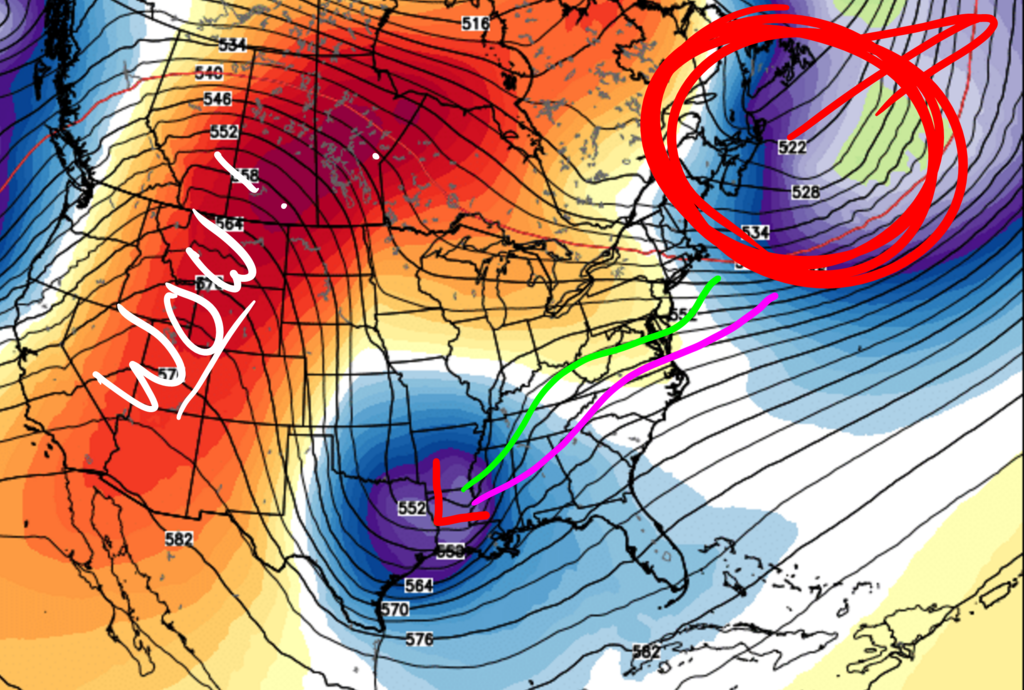 The EURO was the first model to show the south trend. Here are the 12z EURO 500mb height anomalies and you'll notice I outlined two tracks. Green and purple. If you recall from the very first update, I outlined three scenarios this storm can take. Now, I am down to two. I think this storm will take one of these two tracks. The green would bring Godzilla (12"+) snowfall amounts to the area, possibly even Roidzilla (24"+), while the purple would be more of a 4-8" type of event. Yes, this means I feel we will at least see a 4" snowfall since I am no longer forecasting an out to sea scenario. Less amounts likely as you head to western NJ, eastern PA, and HV. But that's not important right now.

Eye popping off this map is the western ridge. Look how amplified and expansive it is into western Canada. Remember when we were worried about the western ridge? This is a case of "be careful what you ask for." Now the ridge is SO amplified that it overpowers the flow as it progresses east. It collapses on top of the mean H5 vort and acts as "downstream" blocking.

We also have "upstream" blocking. Notice the negative heights I circled in red over southeast Canada. There is an ULL (Upper Level Low) that is preventing heights from rising up along the east coast. This mean the H5 vort stays on a west-east track once it closes off instead of tracking north into our latitude. If the ULL can MOVE out faster, preferably BEFORE H5 closes off, that would ensure height rises along the east coast and a storm track further north. 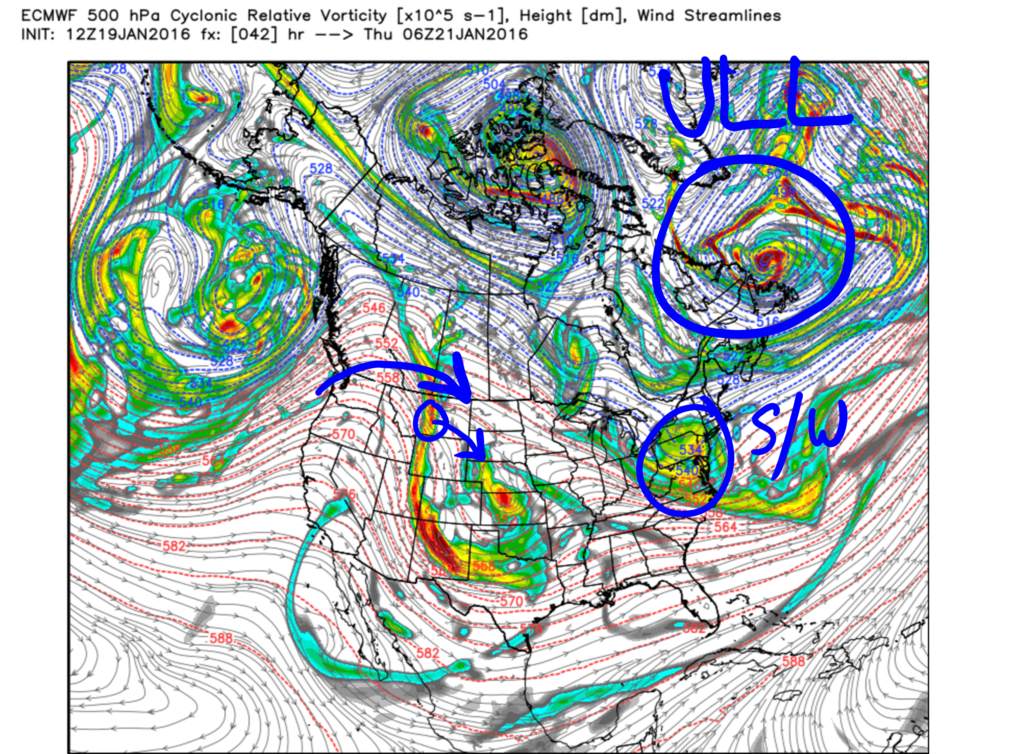 Here is another look at the ULL this time circled in blue. However, I also wanted to point out the lead energy in front of this storm which is the smaller circle over the Northeast. Notice how it also has trended to be stronger and actually shows a weak trough over the Northeast. This is another "new" trend on the models. Before, this energy was weak and shearing out or heading out to sea faster. Between this s/w and the large ULL, heights along the east coast remain zonal or flat. These two features act as "confluence."

I also drew an arrow to show how the ridge could overpower the storm. Notice how it's collapsing on top of the mean vort. The northern energy is forced to dig very quickly which is one reason why H5 closes off so early on the EURO. The earlier H5 closes off, the worse it is for us. Typically our biggest storms are when H5 closes off right before the storm impacts our area. 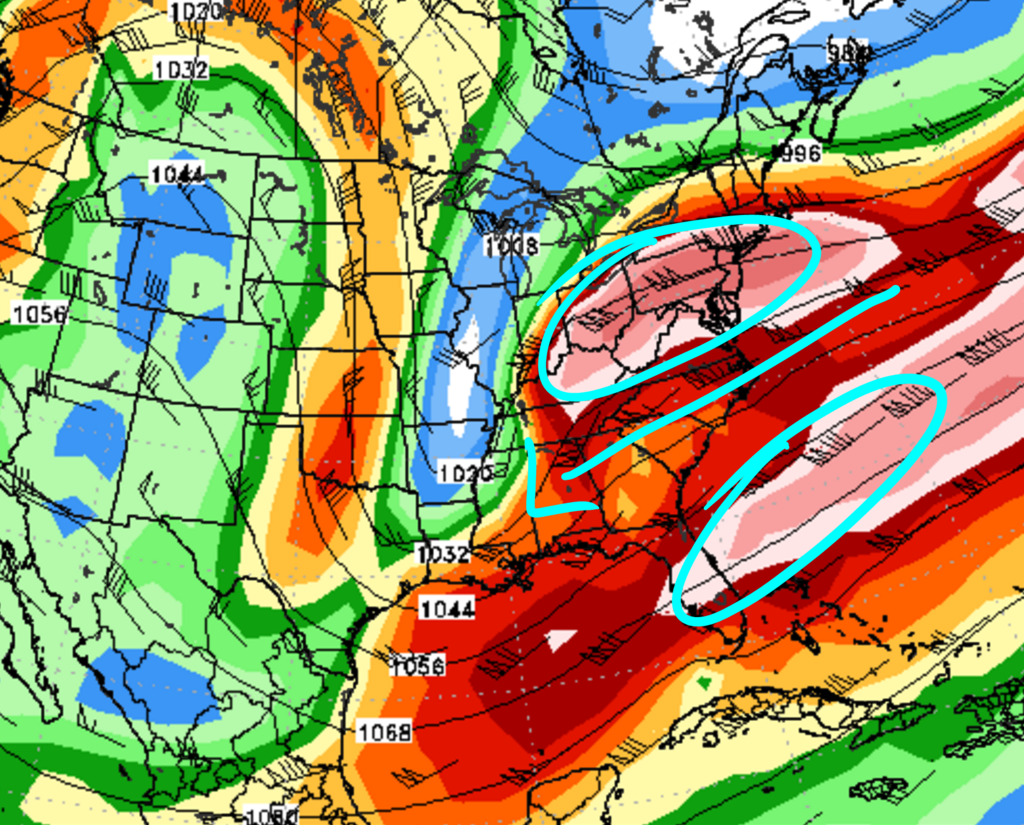 Lastly, here are H250 jet streaks from the EURO. A couple of days ago the northern jet streak was located over New England. Now it is running through the Northeast. One reason for this is because of the flat heights and where H5 closes off. If the jet streak was further north, it could "pull" the storm north along with it. Also notice the southern jet streak. Storms tend to track in between these two jet streaks. If the mean trough goes neutral faster, this would orient the jet streaks more north than east and could possibly favor a track further north.

So, will there be a north trend? That is the billion dollar question and one I am not comfortable answering. In past experience I've felt like models would correct themselves back to their original thought once we're inside 48 hours. We still have 2 full days of model runs to go not including tonight's 00z. We'll see what happens. This is better than the alternative which would be tracking a Sudden Stratospheric Warming Event trying to see if we can salvage February. That is boring! THIS IS FUN PEOPLE! KEEP ALL NEGATIVE POSTS IN BANTER! LET'S DO IT!!!

I LIKE IT!!!!! lol May the models run fast and the drinks go down smooth!!

Great write up Frank thank you!

This is never a problem.

Anyway, love the look of the 00z SREFS. Great start to the evening.

I honestly don't know if I've ever seen three threads created in three days for one event. Ever. And I've been a member for long time, since the 7online days ahahaha it's great!

You're the best dude

Great analysis again and wow I never knew such a strong west coast ridge could do this. Learn sum tin new everyday and with every storm. Hope that s/w gets the heck out if here so we can build the heights on the coast and the confluence to our north weakens and the vort stays n and moves n and closes off over VA capes!!

I have a lucky homebrew going down for the north trend.....here we go!!

Actually confluence does look a bit weaker so far through 48. At least to me, but it is the NAM lol

Like I said before Frank, you called it in banter thread with "7 days before a storm". We are a d-minus 3.5 days and we lost the EURO. And then at d-minus 2 days, the trend starts north. 50 miles every run which would put the ULL at around maryland come friday night. And then, let the Nutella flow.

Are we still doing a chat tomorrow? That is, if the storm is looking good for us by then?

Are we still doing a chat tomorrow? That is, if the storm is looking good for us by then?

00z may be a little slower than 12z which would be ok; let the northern energy over the Northeast escape a little more. We shall see

NAM looking at bit better so far, out to 63.

66 I see HP confluence into the eastern US trying to force a further south transfer of the low.

66 - Confluent energy definitely moving out slower than 12z, but secondary shortwave coming into the Pacific Northwest is weaker

72 low popping up around GA/SC noooo.

This is gonna swing wide right