CMC has a brush with the first coastal now, may have to watch for more signicifant interaction, trend could be real

I'm hearing the UKIE is west.

A. 2 to 5 inches in 4 days is a joke. Don't even pay attention. You could get that in 1 hour under the right circumstances

B. Northwest trend all winter. Get fired up

Anything on the Euro

@oldtimer wrote:Anything on the Euro

6Z NAM needs a jog west about 100 miles and we get clobbered even in the HV, which makes that 100 mile jog west seem unlikely because this is not the year we get clobbered. We've seen moves greater than that within 60 hours this year though so it stills bear watching.

The next GFS should be interesting.

All local Mets in my area and Philly are saying the first storm will miss us completely. The second one would only give us light snow showers Monday night into Tuesday morning. But they said the second one would have to be watched. The station in my area said that second one would produce an accumulating snow from Monday night into the day on Tuesday. I'm really surprised by this because every time we have a snow event they always down play it to only a nuisance.
I'll be anxiously waiting to hear from our team of crack forecasters to see what there thought's are. See you all later.

Seems to be a lot of uncertainty with the 92nd t storm. Hearing some models have ticked it back west. Some it's,some so close. And so on. One thing for sure it's a big and powerful storm.

Well, Inaccuweather probably spot on for my area in the HV ,they say "a little bit" of snow Tuesday and "a few flakes" for Wednesday.I better start preparing for a coating to an inch while the Shore and LI crew gets 8 to 12.

Well the 00z's did not do a whole bunch to make me think a nuke will be surprising us for Monday.  Models for the most part have a swing and a miss.  (Euro ens, Euro Op, Ukie, GFS, GFS Ens, Rgem) I still think eastern most sections, eastern LI and SE CT/The Cape, could see snow showers or light-mod accumulations, because as we have seen with all storms so far this season a NW trend in the end seems to occur.  The 4km from last night also trended back east this am, but still has 3-5 over most of LI for Monday.  We shall see.

There is a scenario that could pull that system back closer towards the coast via a capture by the incoming trough which if occurred would be reminiscent of a Sandy esque sort of track.  The short wave that becomes the Tuesday to Wed threat was just coming ashore overnight.  Its this digging s/w that creates the trough that tries to capture the system and either pulls it back closer towards the coast or acts to keep it OTS.   This is all dependant on the timing and the tilt of that trough.  If the trough stays positive to neutral we get OTS to glancing blow. If the trough trends neutral to neg quicker then we will see glancing blow to more significant impacts.

12z today both pieces will be fully sampled.  The window for any major changes has but a mere crack left before is officially closed.  Many would have the window closed already, but because the Monday storm is so powerful and the tendencies this season is to trend NW inside 24-48hrs it def still bars watching. 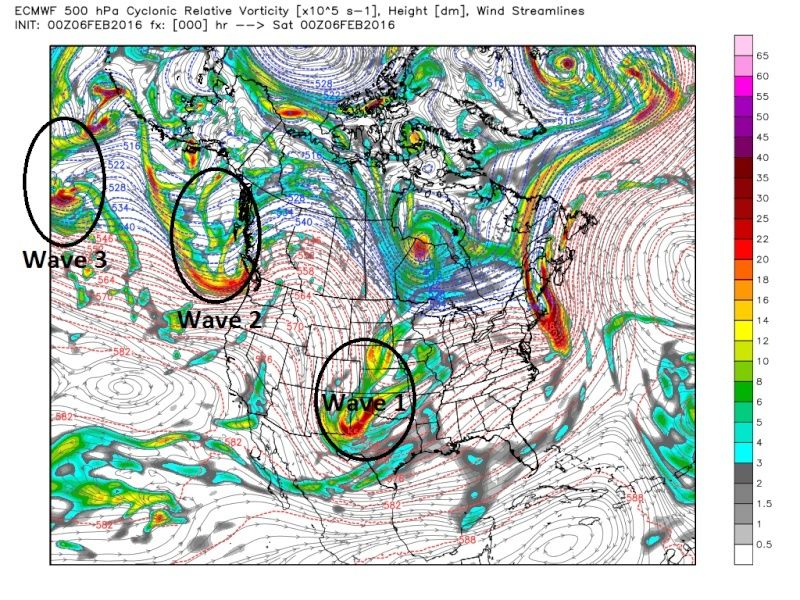 Wave 2's impacts will be determined by what wave 1 ends up doing, and how wave 3 behaves behind it.  Wave three will really amplify the ridge quite impressively in the west.

Some things Im keying in on:

1) as you can see in the image below there is a ton of energy associated with the incoming trough and wave 2.  Right now the models have it all strung out throughout the trough:  Id like to see the models begin to consolidate some of it towards the base of the trough (smaller circles and arrows). 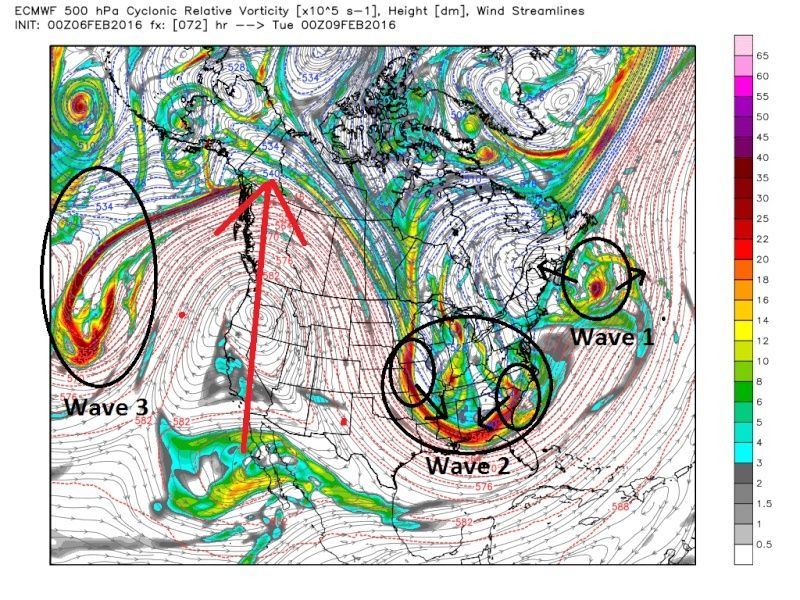 2)  Wave spacing and positioning between Wave 1 and Wave 2 will play a role in how the Tuesday Wed system unfolds.   The current solns on the positioning of Wave 1 relative to when the surface LP is redeveloping off the Va/Delmarva coast in response to to wave 2 energy I think is leading to an area of subsidence between the two systems and/or the models are having a hard time figuring where to focus the energy leading to what appears to be a relatively light event despite a surface LP of sub 990 at or just inside the BM. Notice above I've drawn two arrows over wave 1.  If wave 1 trends further OTS it helps us, but I also think a track closer to the coast and further north does as well because both shifts the area of subsidence and allows the redeveloping surface LP to draw from the Atlantic and organize its precip shield better. 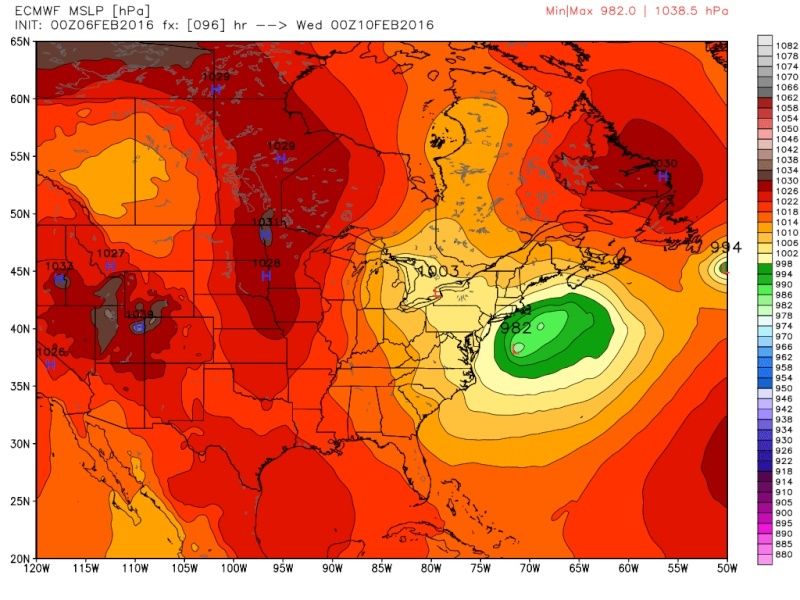 Nice write up sroc so as of right now coastal areas are looking at minimal to moderate impacts with possibility of higher impacts of their is a capture.

Looking at wave 2 develop in the Atlantic on the models, if that thing hit us, it would make Jonas look like yesterday's snows. It is a monster of a storm,

what a tease my god!!

Seeing such a Roidzilla in the ocean saddens me. We'll only feel it's effects of the outer most bands.