Sorry for the lack of posting today. Busy day at work! I want to provide an update on tomorrow since everyone is probably hearing different things. We know there will be an inverted trough setting up a band of snow somewhere that will drop a few inches of snow. Like I mentioned these are very difficult to pinpoint and often lead to varying forecasts. The best we can do is look at the upper levels and see if there is one area favored over another.

The GFS model pops a coastal storm southeast of the BM and takes it due east. Notice the heavier precipitation around the DC and Philly Metro areas. That is likely the "norlun" setting up. The reason why the GFS and other models are consistently showing the norlun setting up south of our area is because of where they track the 500mb low.

Here we are at 1pm Tuesday which is the same time stamp as the surface map. Look at where all the 500mb vorticity (energy) is. It is over DC Metro. As the 500mb low begins drifting south, the 500mb energy pivots N&E (below).

You can see as the 500mb energy expands into our area the surface maps begins showing lighter snow move north into NEPA, HV, NYC Metro, NNJ. 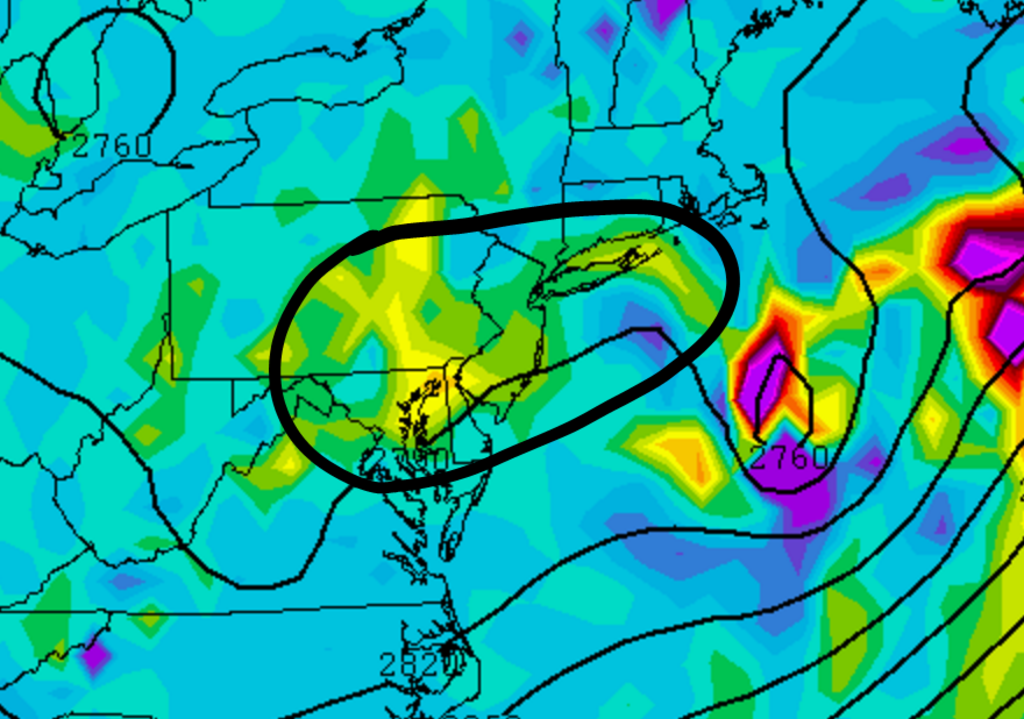 700mb frontogenesis (lift) is over a widespread area. Once the 500mb energy expands north and east it will allow snow showers and squalls to develop. At this time, I think the brunt of the snow and the norlun will stay to our south. Again, these are hard to predict but almost all guidance is showing the heaviest snow amounts south of our area.

The UKMET - which was the most bullish model bringing the norlun north into our area - shifted south today at 12z too. It still shows widespread snow showers due to the instability in our atmosphere but the heaviest snows are well south near DC.

I know Mugs mentioned the RGEM is popping a Miller-B just south of LI and throwing back moderate snow amounts into the area, but the SREFS and other major globals are not showing that so not sure how much merit it has. It's definitely worth tracking but I am leaning against it for now. 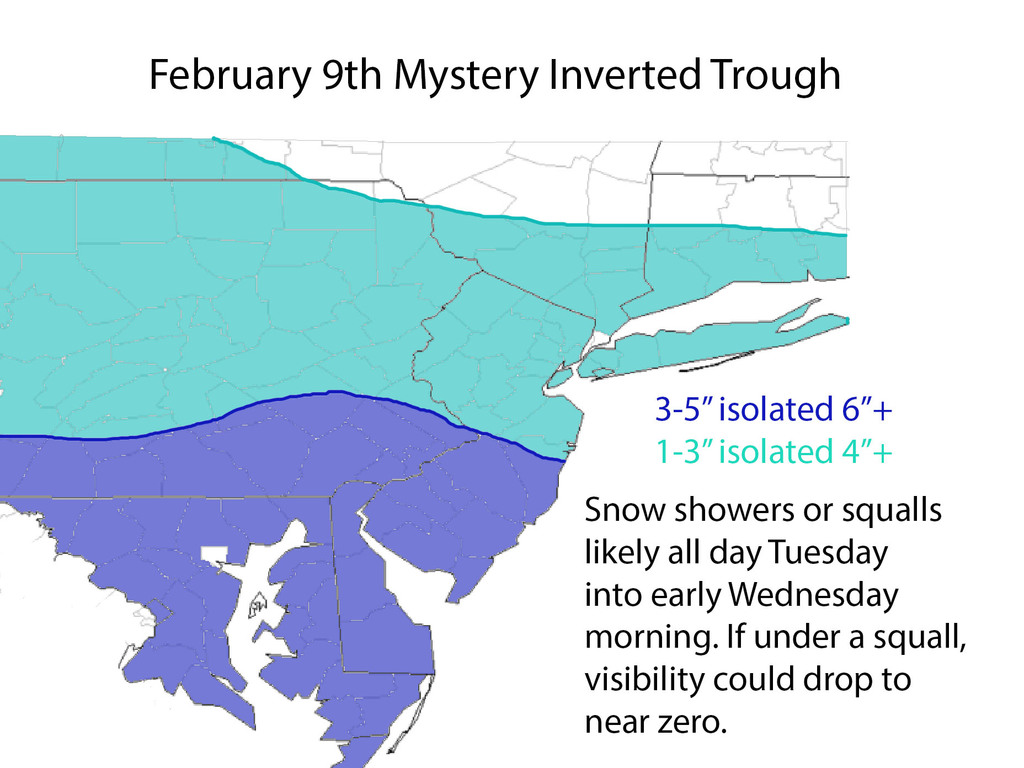 This is the map I am going with for the area. Due to the uncertainties that arise with these types of systems, I am putting most of the area under a large swath of 1-3". The general idea if the higher amounts should be contained to our south, but we can't totally discount the possibility of CNJ into NYC and LI getting into a piece of the IVT too. Be careful if you're under one of the snow squalls that develop over your area. They can drop snow FAST and deteriorate visibility.

I will have another write up out tomorrow highlighting the cold and possible snow this weekend!

Ur the best frank thanks

Check out current radar. Look at all these bands rotating around the 500mb low. As the 500mb low track south and east we have to carefully watch where the norlun sets up and IF a Miller-B coastal low "pops" somewhere like Mugs showed with the RGEM

frank it looks like it will come right up the coast am i wrong??

And if we get a coastal it's tomorrow night correct.

The NAM Hi-Res, which did well with Storm 1, shows moderate to heavy snow over southern and central NJ 1am Wednesday

@skinsfan1177 wrote:And if we get a coastal it's tomorrow night correct.

What models are popping the coastal closer to coast

@skinsfan1177 wrote:What models are popping the coastal closer to coast

Tonight runs on the Meso models are huge?

Like the RGEM, 18z NAM also shows the coastal for tomorrow night

@skinsfan1177 wrote:Tonight runs on the Meso models are huge?

Frank, so far we definitely have similar ideas. Did you make a thread for maps? If so, please add my map from the other thread lol

@rb924119 wrote:Frank, so far we definitely have similar ideas. Did you make a thread for maps? If so, please add my map from the other thread lol

Better at night, gfs had the coastal but they kind of lose it, gfs is not good at these type of meoscale events, coastals as of late imo, nam and rgem have it so we have something to work with so far

@rb924119 wrote:Frank, so far we definitely have similar ideas. Did you make a thread for maps? If so, please add my map from the other thread lol

I did not. But feel free to post it here. Event is too minor for a maps thread.

Here is my first call for tomorrow: 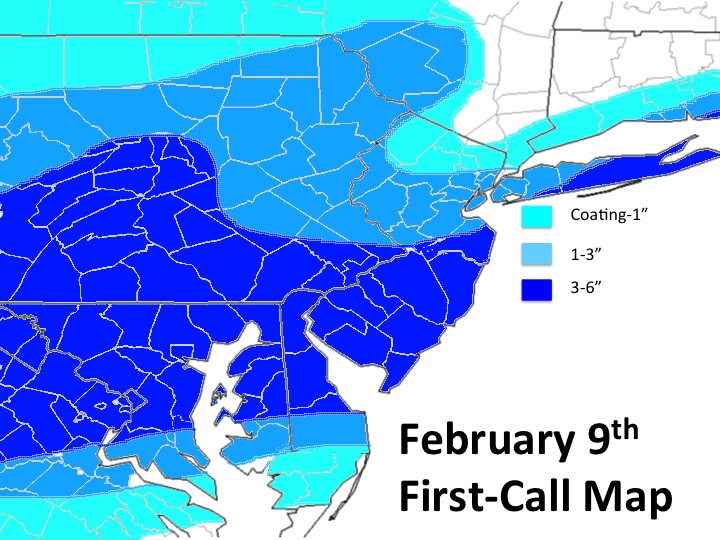 While this is only based on data through today's 12z runs, I would not be surprised if I have to add a little bit to the northern/western extent of my 3-6" zone, and maybe add a 6-9"/"locally up to 8/9" area based on what I have seen so far today. While there is still a broad consensus that the IVT stays largely south of NYC, some of the modeling is starting to hint that it may end up further north than it has been progged to, and instead of only targeting Baltimore/D.C. and possibly Philly, it looks to me like it has crawled northward to now also include central NJ and the eastern half of LI. This idea has support to me in looking at the mid-levels, as what used to be a shortwave begins to become sheared out as it rounds the base of the trough. Through PVA, it looks to hold together long enough to possibly bring some moderate snows further north. This also translates to H7, where a local closed-low beneath this shortwave/PVA may aid in enhancing omega for a period of time tomorrow midday and afternoon. Another concern of mine is that these same forcing mechanisms may be just enough to develop a relatively weak coastal system right along the coast, and almost as an extension of the IVT, when combined with the large degree of baroclinic instability between the warm Atlantic and incoming Arctic airmass. While it may be weak and the forcing mechanisms may be declining in strength, this developing surface low could throw more moisture back over its northwestern side, mainly in the form of bands with some stratiform precipitation. This will be a key feature to watch in the very short-range guidance, as well as how the mid-level energy allows the levels beneath to evolve. Just my thoughts.

CAN THIS SWING NORTH A ND HOLD TOGETHER!!!

My first call for Tuesday nights coastal chance only. 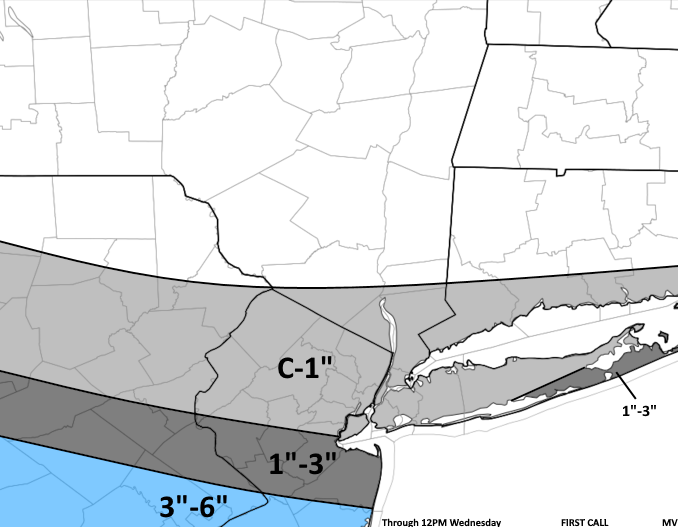 Frank you keep saying only the rgem has the coastal but the NAM does too, so it does have some support and looks to be much further inland that the snow maps you guys are making. We shall see I guess, I am not holding my breath for anything but will be presently surprised if we get something good. 00z runs will be interesting for SR models.