A powerful storm is forecasted to slam the east coast late Monday into Tuesday next week. The exact path is unknown at this time even though models seem to be in concensus of a driving rainstorm will high winds. This may be the case, but I'm not sold on this solution just yet. 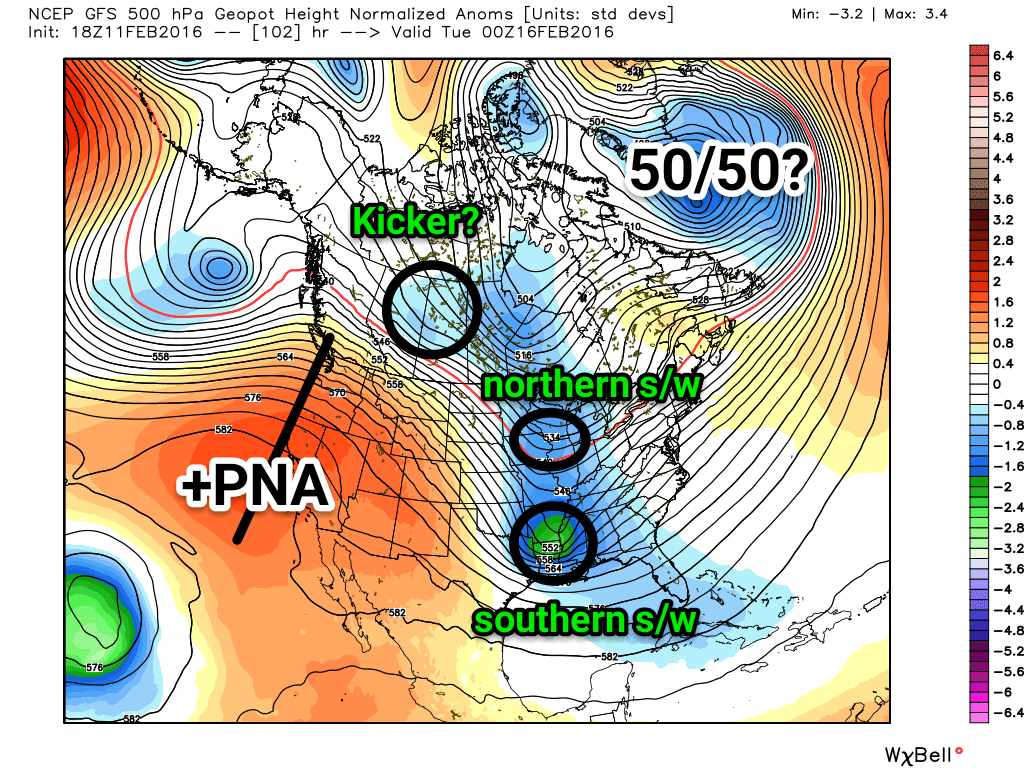 There are a few reason why models are cutting the storm to our west. The main reason is the southern energy is very amplified and there's a lot of northern stream energy phasing into the trough. This takes the trough negatively tilted very early and results in heights to rise along the east coast. Some reasons why I'm hesitant to say this will absolutely cut to our west go as follows:

1. The upper energy is not sampled very well yet. A weaker southern energy would keep heights over the east coast flatter and the phase would happen later in this case.

2. Record breaking cold temperatures this weekend will be hard to displace so quickly. Will heights respond from anomalously negative to positive that quickly? It depends on how much phasing occurs to our west.

3. The PNA is positive. A trough should naturally be located on the eastern third of the country and there definitely will be. Again, it depends on the northern and southern stream phasing and this won't get ironed out for another couple of days. The trough axis is actually not far off from being favorably positioned for our area.

4. The 50/50. If it's further south than where currently progged this will keep heights over the EC surpressed. This relates back to the anomalous cold and the timing of which it actually exits the Northeast.

5. Will there be a kicker (clipper) behind this storm that may try to push the phase to happen further east, thus preventing the trough from going negative too quickly? This is not shown very well on models right now but it's something to watch for sure.

I mentioned yesterday I'm favoring an inland or coastal hugger track with a front end thump of wintry precipitation before changing to rain. I'm still favoring this scenario, but I wouldn't be shocked to see a cold trend take place over the weekend. All I'm saying is I think the pattern isn't December-level abysmal to completely write off this next storm threat. We'll see what happens.

It may not cur but may go right over us or hug too close, agree with wintry precip to rain for now.

Nice write-up Frank. A little optimism all Mugsy or Scott. Nice. How ya feelin?

NE PA will be in a perfect spot!

syosnow94 wrote:Nice write-up Frank. A little optimism all Mugsy or Scott. Nice.  How ya feelin?

NE PA will be in a perfect spot!

Also when we need a kicker to help us let's see if it does actually come to fruition, a 4,5 combo would make the weenies ecstatic!!

Jesus, I have been sop busy have not checked models much but wow (yes I know these maps rarely verify, but also have I rarely seen it this high) 70+ kt gusts over a large area....If its all rain what a waste of a you know what. 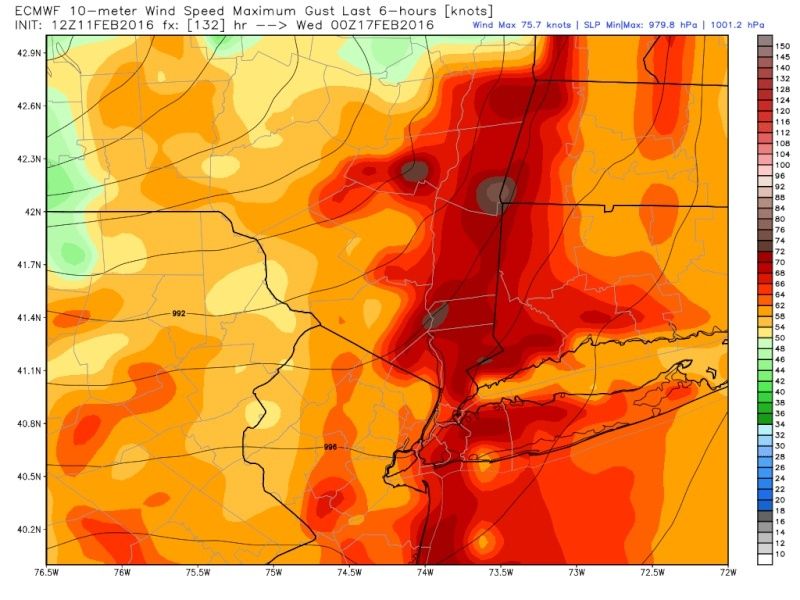 Euro does not even have over a inch really, and interesting the Euro is so much more amplified that the CMC, you do not see that too often.

The GFS is in the middle, slopstorm or rainstorm imo.... Thing just charges straight north.

I know it's the nam at hr 84 but it is much faster and weaker than other guidance. usually nam is very amped up at this range. hmm.

the 00z para gfs is weaker and east from it's 18z run but very warm for us. looks like 00z euro with low in e/pa. the trend tonight has been weaker faster and east. let's see if today's models continue this trend.

cmc ens are on the eastern side of guidance this is our best shot esp for n/w areas.

pretty big spread. look at how fast several of the members are. takes low east of li by 6z tues.

gfs ens much more amped and unusually less progressive than cmc. we def need this system to trend weaker.

6z GEFS, not as bad as previous runs

The thing I hate is right now its progged as a peddling 1-3" slop storm with snow to ZR/IP to rain back to possible snow at the back end. If I get another C-1 event that washes away after hours, my heads gonna explode, happened like 5 times alone this week and probably 7-10 times this winter. Sick of it. Annoying, but if anything is in our favor, we have very cold temps freezing the ground, there WILL be a weak HP over the central plains in Canada to push some cold air into the general region (mostly near the clipper though) as well as a large mid to upper 1040s high in the cold north atlantic, cant see that hurting, not out over warm water near Bermuda like the early Jan torch. Just need the clipper to kick it east a bit.

12z nam continues weaker and quicker than most models we get a nice front end dump...

Look over the inital Feb 12-14, 2014 thread, look familiar? High over atlantic (none to N or NW), kicker, overall negative outlook (at least by me initally), similar setup, may be straw grasping here but could that be a similar analog?

Look over the inital Feb 12-14, 2014 thread, look familiar? High over atlantic (none to N or NW), kicker, overall negative outlook (at least by me initally), similar setup, may be straw grasping here but could that be a similar analog?

Tom I dont think your grasping at straws at all. Im not sure just how far we can trend with this set up, but I do believe that we can def trend colder for longer. For me this is not a question of will be stay all frozen, because I believe we def change over, al least the coastal plain, but In my experience with overruning events the cold ends up being much harder to scour out then what models show in the md range. This was a text message I sent a friend of mine after he asked me what I thought about the set up:

"Youve got three things causing it (It referring to why/how such anomalously cold air can simply just disappear so quickly). As per the teleconnections the PNA goes neg and the EPO spikes positive collapsing ridge out west, and the NAO which is now neutral to slt neg spikes positive as well. The combo means a progressive flow which lifts the cold right up and out of here. That being said cold air this time of year is def hard to scour out. Front end thump is what Im thinking with trends towards a later and later changeover."

Now I have yet to look in any great detail at the models for two reasons. 1) Like Frank mentioned the energy involved has been in very poorly sampled areas, so I still expect things to flip flop and change for better or worse until Sat 12z or so. 2) Because of the stupid IVT set up earlier in the week I have been way behind on my business duties so Ive had to play catch up.

Anyway I will have more to add as we head into the weekend.