I am starting a thread for this because I think its still trending and personally would like to cont the discussion as long as it is.

I know many have lost interest in tracking this system because it has trended unfavorable for most, but now that I have had a chance to look at the 00z runs from last night it is truly mind boggling to me.  First off I have to say the amount of inconsistency at both 500mb, and naturally at the surface, on the GFS and the Euro operational models with this system STILL run after run after run has been spell binding.  It tells me that they are still out to lunch; esp the GFS.  The GFS 06z this morning takes the LP on a track through eastern Indiana up through Michigan?????????.  I am fairly confident that that wont happen so throw it out. 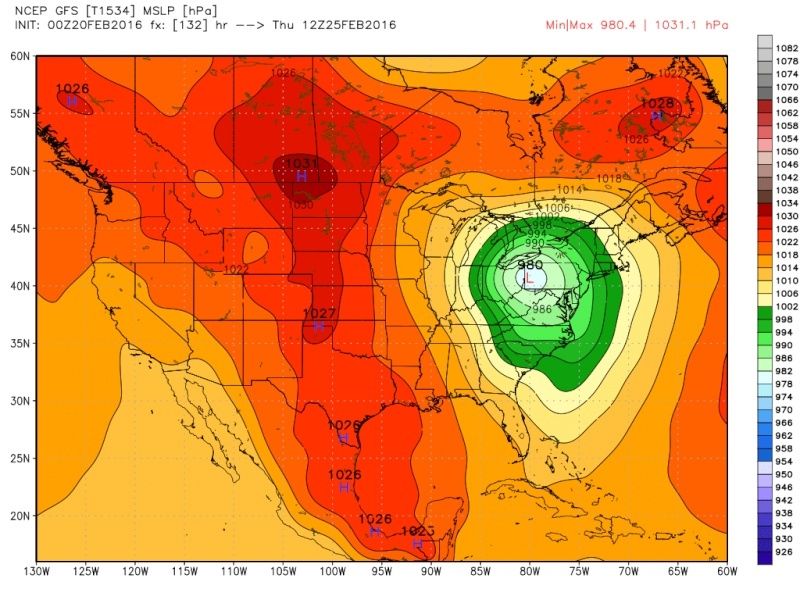 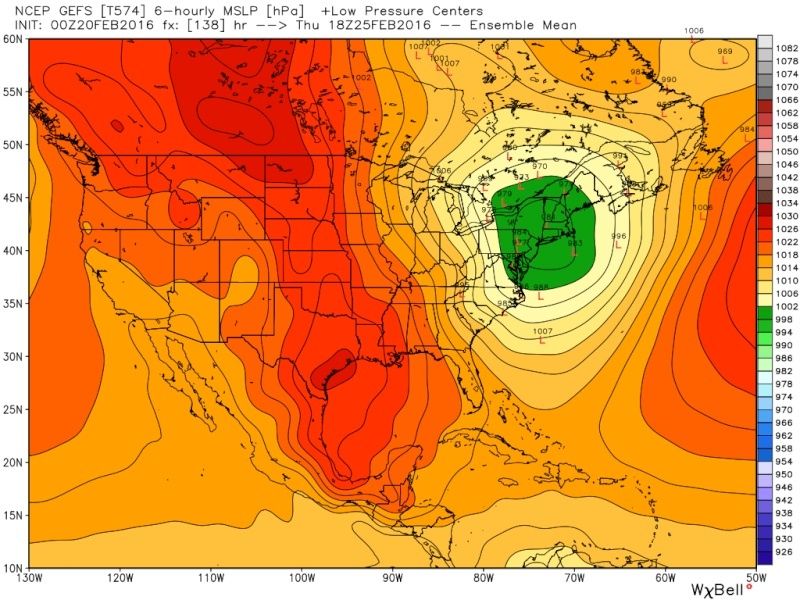 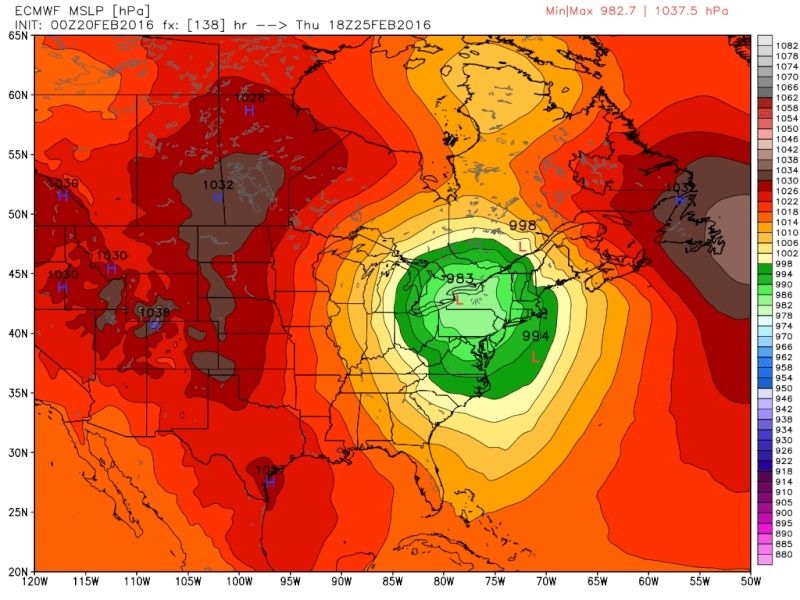 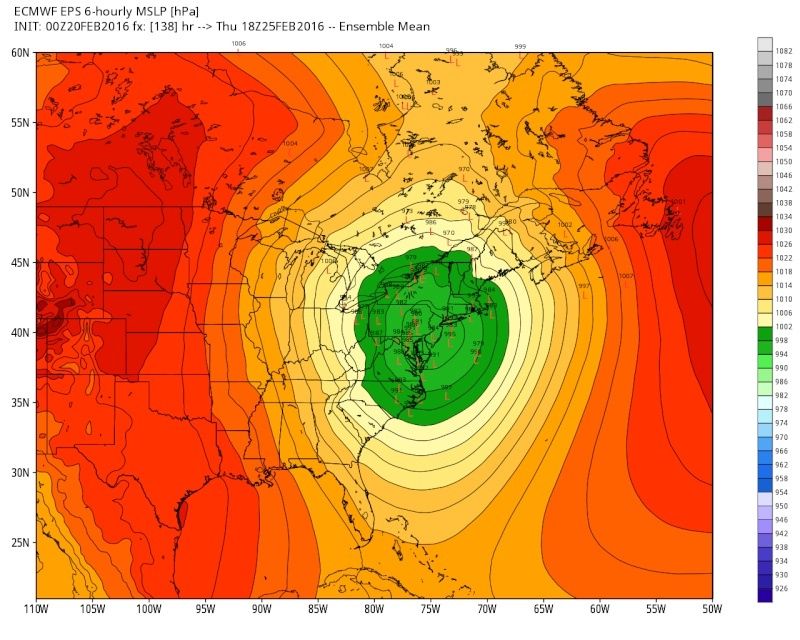 Now to be fair the Ukie which has been one of the better winter models this season has been consistent in its track through western NY/W PA which is west of the aforementioned ensembles but has shown a shift east with successive runs.  I don't have 500mb for the Ukie, but both the Euro and GFS close off the system at 500mb early and the western track ensues from there.

On the other hand the Canadian still has a track over Eastern LI: 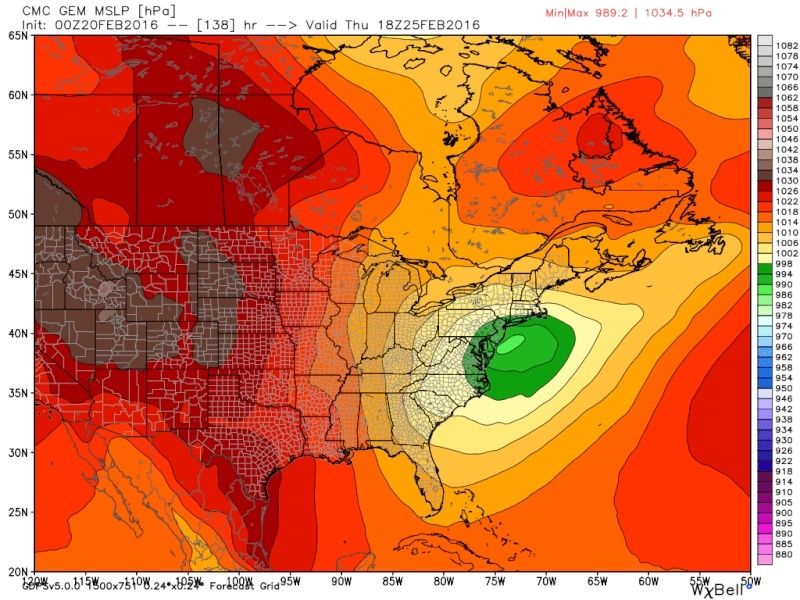 Now one thing is becoming clear.  There will most likely be an initial weaker wave that moves through the area on Tuesday; followed by the main event Wed-Thurs.  If true this could be a game changer.  So how do you make sense of it all.  I mean you have operation models changing their storm track by hundreds of miles from run to run because the energy depiction at 500mb changes from run to run.  Here is my take.


On Thursday afternoon this was my cone of uncertainty for the track put out before the shift west on the ensemble forecasts that ensued over night Thursday into Friday. 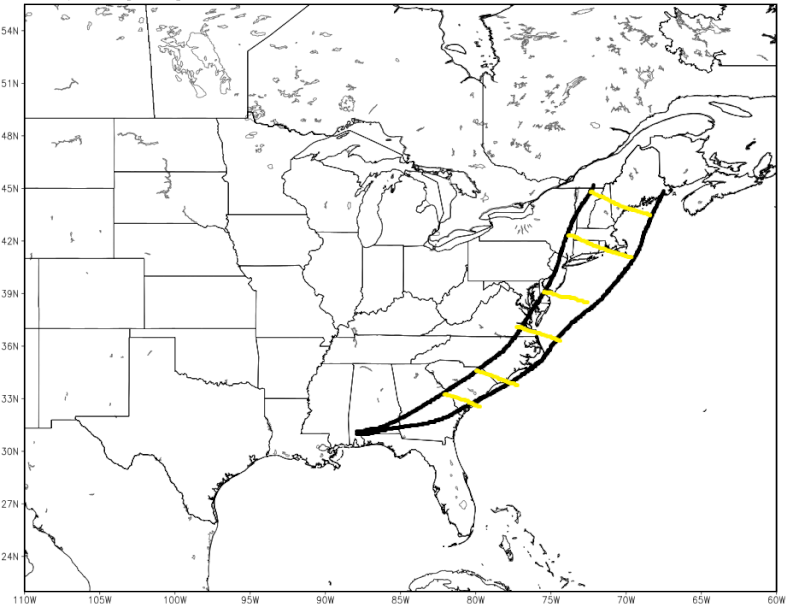 I am shifting my new cone of uncertainty west, but not by that much, about 100-125miles. 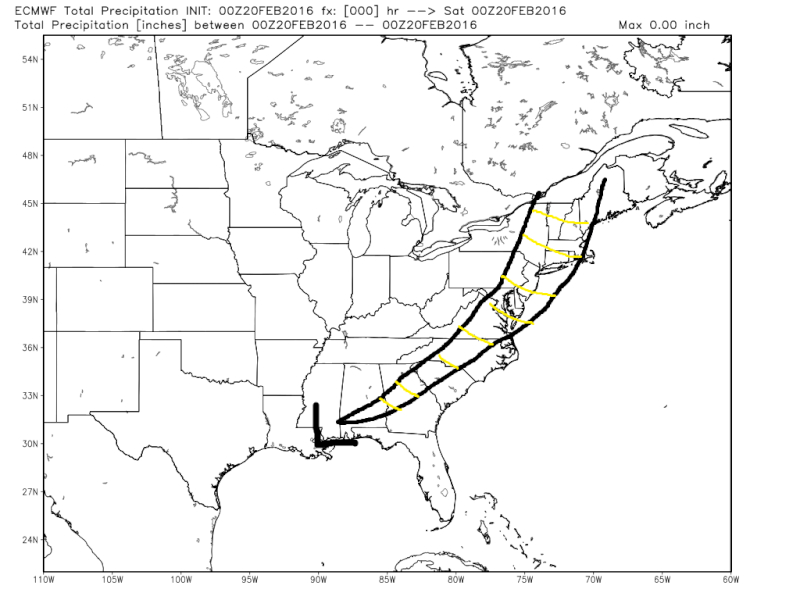 My track is based on a blend of the Ensemble mean and the CMC.  As of now I am leaning to the left side of the storm track but this track is anything but a lock.  There are a few other things to note.  First, with so much uncertainty of the track who gets what and when and how and why, and how much simply cannot be answered.  One thing I will say is if the weak wave followed by the main event unfolds like I think then watch the temp profiles trend colder and colder as we get inside 24-48hrs out.  Look at the CMC and Euro surface map to get an idea why.

When the models lost the two wave idea there was nothing but a  S/SE wind flow into the main system as it came up the coast: 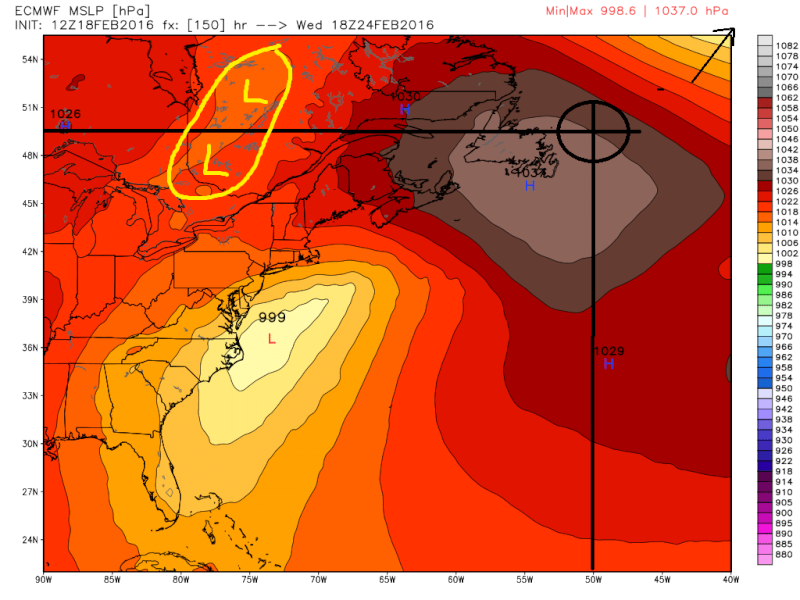 In the next images pay little attention to the exact position of the LP but pay more attn. to the HP to the N.  Slowly but surely with the trend towards this weak wave first followed by the stronger system second the HP that was modeled to be centered in the Canadian maritimesee above) is now trending stronger back west over NE.  Instead we have the first wave move underneath the HP and now we have a stronger likely hood that a N/NE flow is still hanging on as second wave approaches if this hold true. 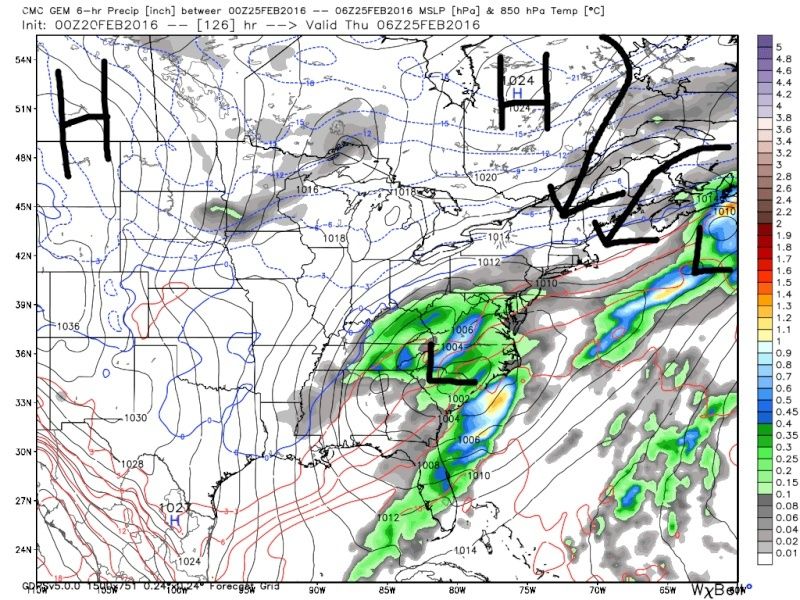 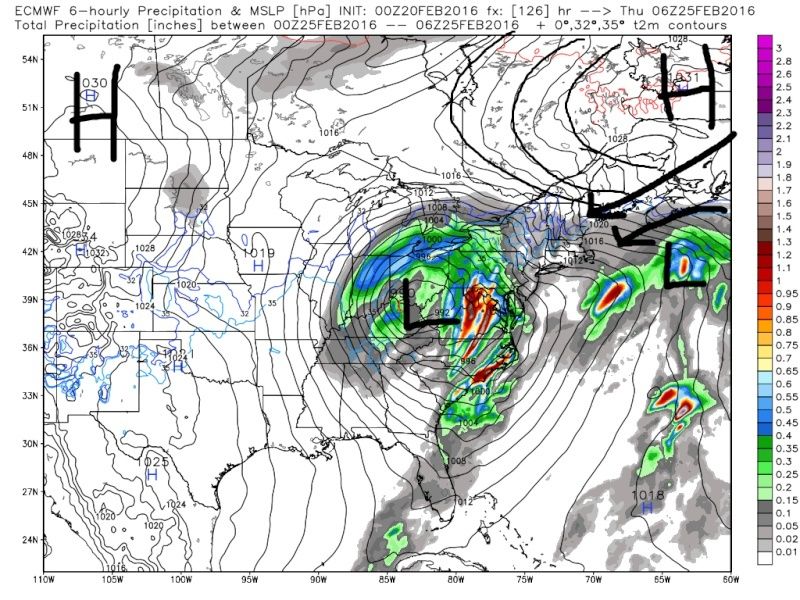 Not that this is going to mean anything, but when I look at the 12z GFS 500 hPa, it just doesn't look right AT ALL to me. For example, how do we go from this (something that looks ok to me):

To this (which, by the way, is impossible to have two separate closed H5 lows):

The first image looks completely fine to me; no issues. The second one, though, definitely signals to me that the GFS is having big-time issues trying to resolve all of these shortwaves that will be involved here. When have we ever seen three distinct shortwaves, with three clearly different axis tilts, within a circle with r=350 miles that haven't ended up being consolidated almost immediately?? I can't remember a time, that's for sure. This is further supported by the third image, where the GFS is depicting two distinct closed H5 lows; one near the ND/MN border and the other over Lake Michigan. This is impossible; period. I'm not saying that the GFS track can't/won't verify. All I'm saying is that I am personally disregarding it until it shows me that it is getting a better grasp of these energies, because right now, it looks rather confused to me.

CMC again eastern most soln. More confluence that the GFS so prevents the closed low from lifting north like the GFS. I still think it trends colder

I know not to get too excited, but I'm snowfall central on the 12z CMC.

I know this image is a bit of a hodge podge, but if the N s/w and energy (circled in blue) would let go of, or better stated if the area circled in black were to consolidate with the energy in the blue circle this might allow the energy in the N stream phase with the southern system. It looks like its so close to doing so on this run. This is just analysis on this model, not what I think will happen. 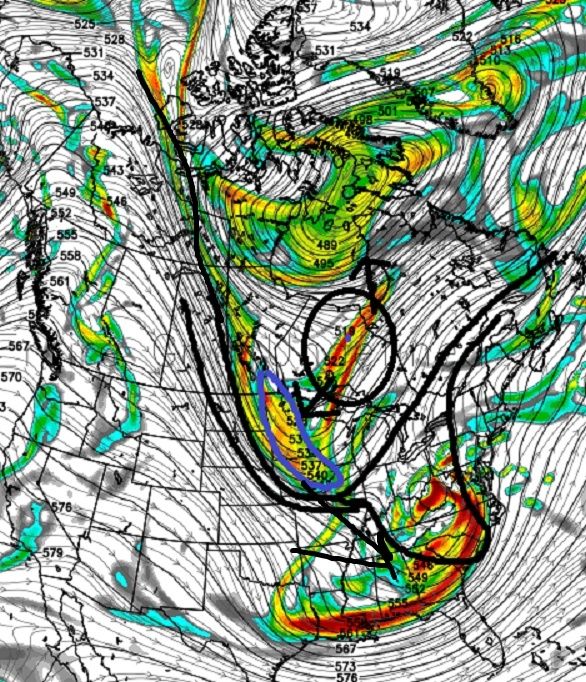 TheAresian wrote:I know not to get too excited, but I'm snowfall central on the 12z CMC.

Good for you! Hope it works out.Models seem to be all over the place with this.

To provide more insight to why this storm will cut west, take a look at this image of the 06z GEFS with my notes on it. 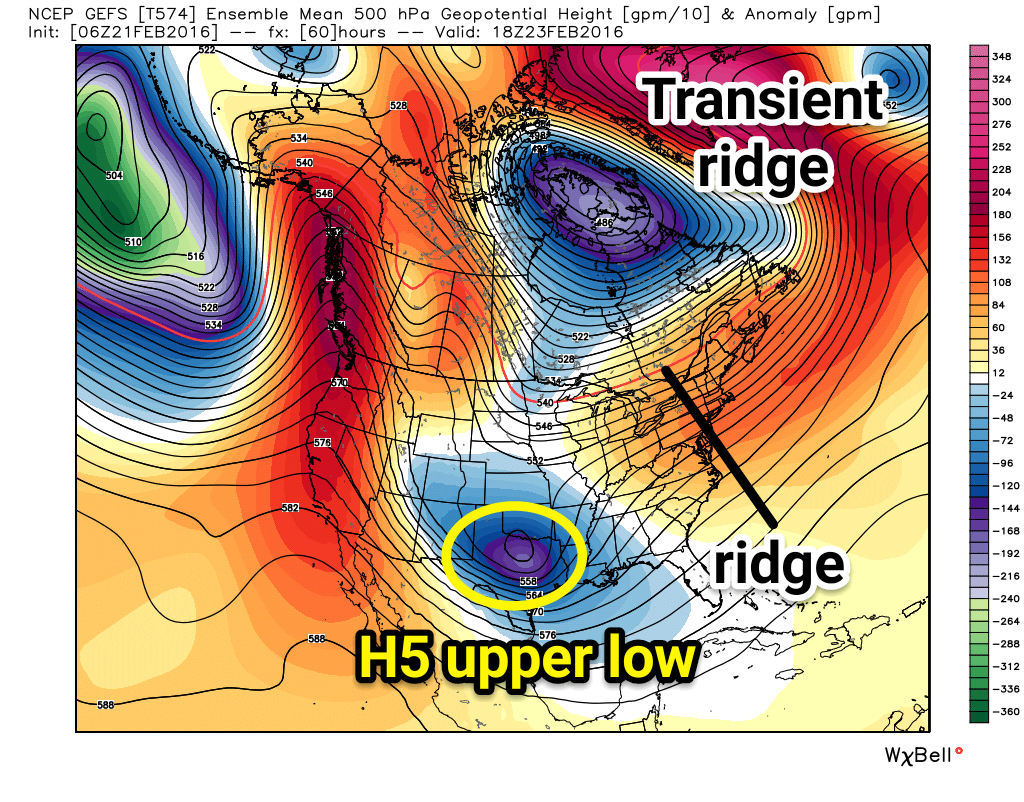 I mentioned this the other day but it's worth repeating. The upper energy associated with developing the main storm is so strong that it closes off before it even reaches the Mississippi. When upper energy closes off early, it allows geopotential heights ahead of it to amplify which boots the NW flow out and the SW flow takes over. Mild air streams into the area as the storm takes a track toward west PA.

both the 12k and 4k nam gives us snow with the first wave on Tuesday aft and evening...

the rgem if it went out further looks like it would concur with nam...

12z gfs is north with the 1st wave precip shield. warmer than nam and rgem but still gives us a little snow on the front end...

you can add in the cmc WOW!!!! for the first wave

Please stop reeling in me Al, I threw in the towel yesterday.

CPcantmeasuresnow wrote:Please stop reeling in me Al, I threw in the towel yesterday.

cp its all going to be washed away by thurs. but models now showing nice front end thumping. btw ukie temps look marginal. do not have snow map for it but it Is slightly warmer than nam and cmc but that's a lot of precip more than any other model

CPcantmeasuresnow wrote:Please stop reeling in me Al, I threw in the towel yesterday.

Jackie Gleason on his Saturday night show in the 60's had a character called "The Poor Soul" and brother, that remiinds me of you with this back and forth snow tease on the models.

i'm hearing euro is not much of anything with first wave. it's pretty much on it's own as of now. all other guidance has up to and even greater than .5qpf with this wave. let's see how short range models handle this later today and tomorrow.

NAM still shows 1-3 inches for some spots. GFS has a dusting for spots. GGEM has nothing. 1st wave is starting to disappear.

the nam continues to show a significant snowfall with the first system...

Thinking nasty snow to rain scenario possible for northern parts of the region, possibly with a significant period of ZR further to the N and W. Temps will likely warm rapidly and get a strong cold front passage with sustained periods of high winds likely due to bombing out and slowing low to our north. NAM winds fairly impressive (for a sustained duration).