just heard on Channel 7 there is a "possibility"of some snow at the end of the week..one can only hope

At that rate the EPS will have this storm in England by next Wednesday. 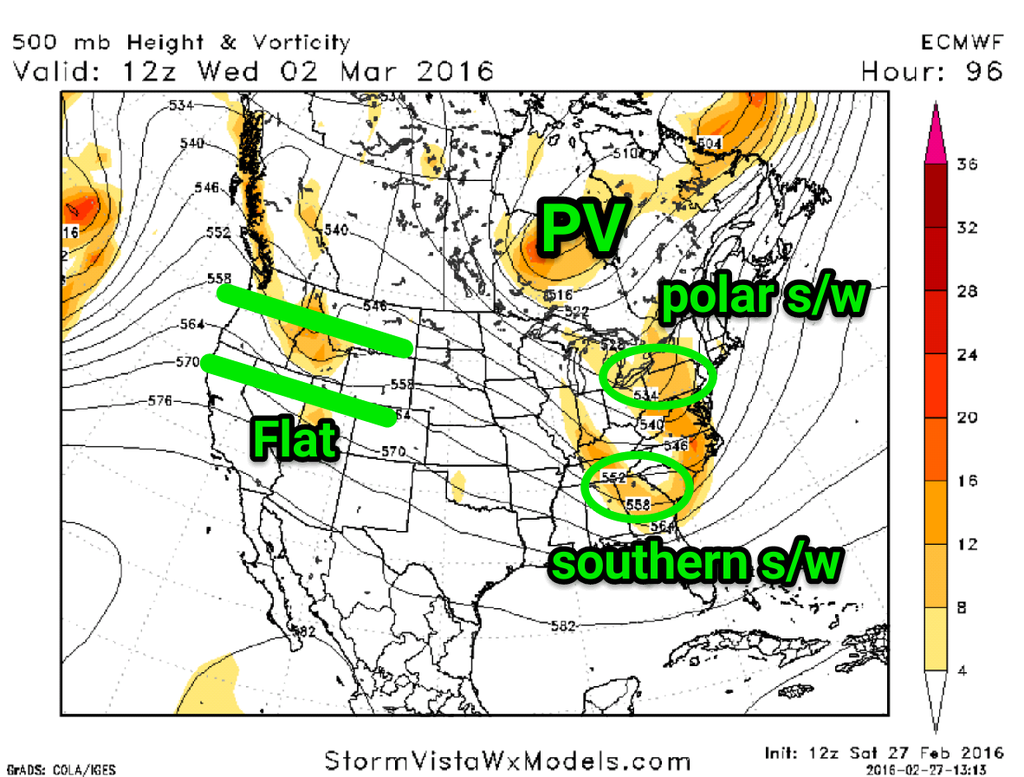 Is this our last snow event?? I would guess yes. http://lakewood732weather.blogspot.com/2016/02/is-this-our-last-snow-event-i-would.html

this is for wens system

also has lost the storm for Friday. n/s that gets washed out. s/s exits through south florida...

GGEM is a nice hit for coastal areas friday

Euro is beautiful. Mid atlantic and snj get hit hard. NYC gets around 6 inches.

First wave waffling back west again on modeling for 2nd/3rd.  Even Ukie shifted the track just over or west of NYC.  I don't think there is enough here to really make a difference, but not dismissing it just yet, esp areas N/W.

As Snow88 pointed out the Euro is really close with the second system for everyone.  It has some support from its own ensembles.  The CMC is an all out bombski for NNJ, Lower HV, NYC, LI, and S NE.  And the GFS still keeps the northern and southern branches separate sliding the second system south off the Fla/Ga coast and way OTS.  I wont take this too seriously yet since we are still shifting the first system a bit but is def on the Radar. How/where the March 2nd/3rd system interacts with the PV will be pivotal to the second system IMO.

Here are the CMC, Euro, and GFS respectively at 500mb.  Notice they all have energy busting through and affecting the ridge out west.  Ive only circled it on the first image(CMC).  The timing of this energy, and how it affects the ridge will as usual play a role in the system for the 4th/5th.

But I think the key this time is actually to our N and E.  In the images below(all represent 18z March 4th) I highlighted the Polar Vortex (PV) and the NAO region into the Greenland area.  As the first system on the 2nd/3rd moves up and out of our area it will draw the PV into Eastern Canada beginning to form a block.  As you can see on the CMC it forms a nice tight vortex which pumps up the -NAO ridge into Canada.  Notice on the CMC the -NAO ridge axis is the most east to west oriented and extends furthest west into Greenland.  This allows the Northern Short Wave(N s/w) to Catch up to the Southern Short Wave(S s/w), and phase the two.   The Euro is slightly less amped and slightly more NW-SE oriented with the -NAO ridge axis, but is similar, and the GFS has the energy most string out within the PV, and as a result has the most neutral looking NAO.  This results in the N s/w and S s/w remaining completely separate; whereas, the CMC and Euro phase the two pieces and we get a formidable storm nearby. 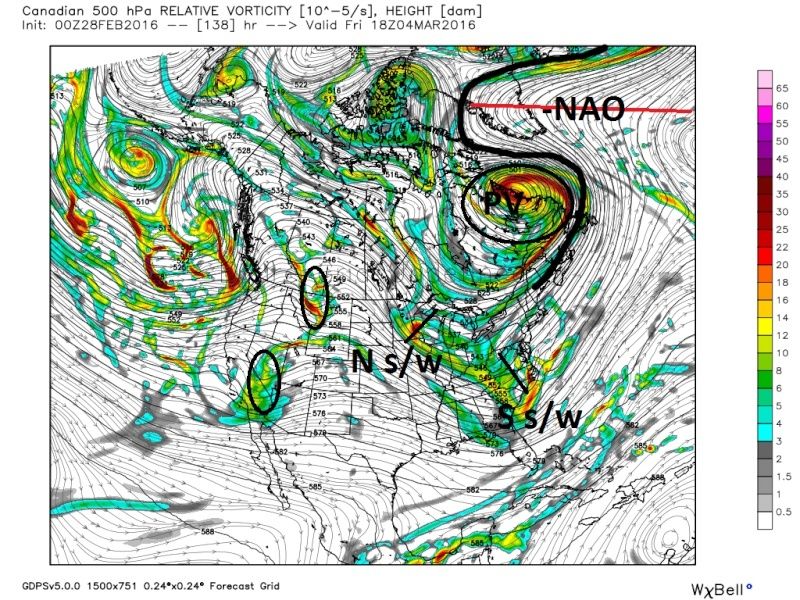 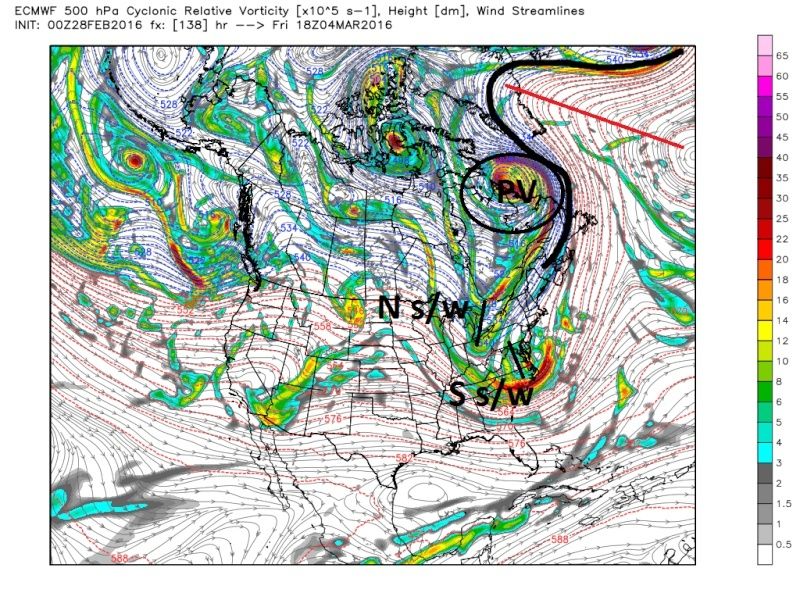 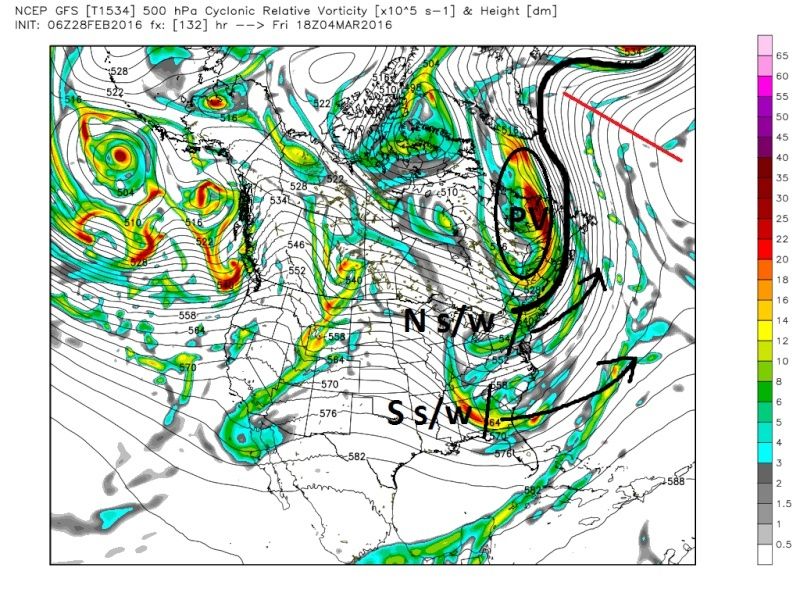 Here is what the surface maps look like, CMC, Euro, GFS respectively, by 6z March5th relative to the above 500mb interactions.  Notice in all 3maps a nice banana HP is over top from SW to NE. 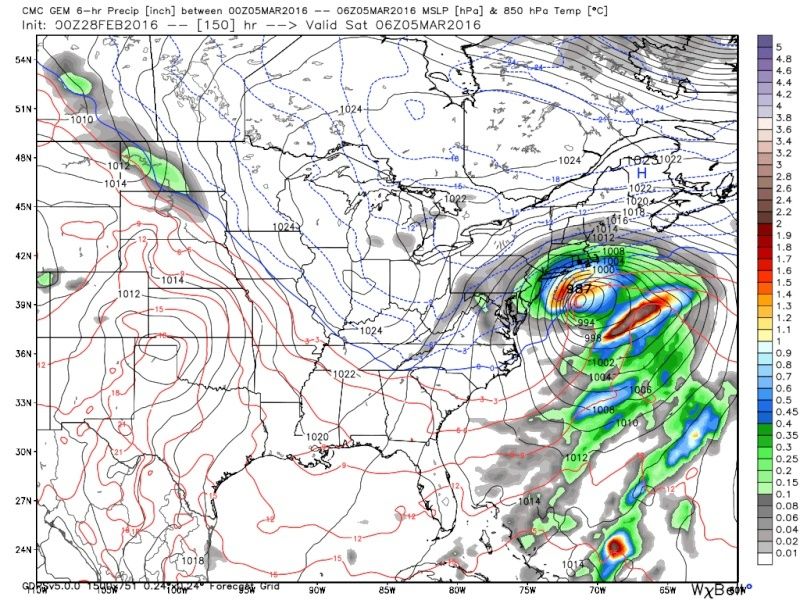 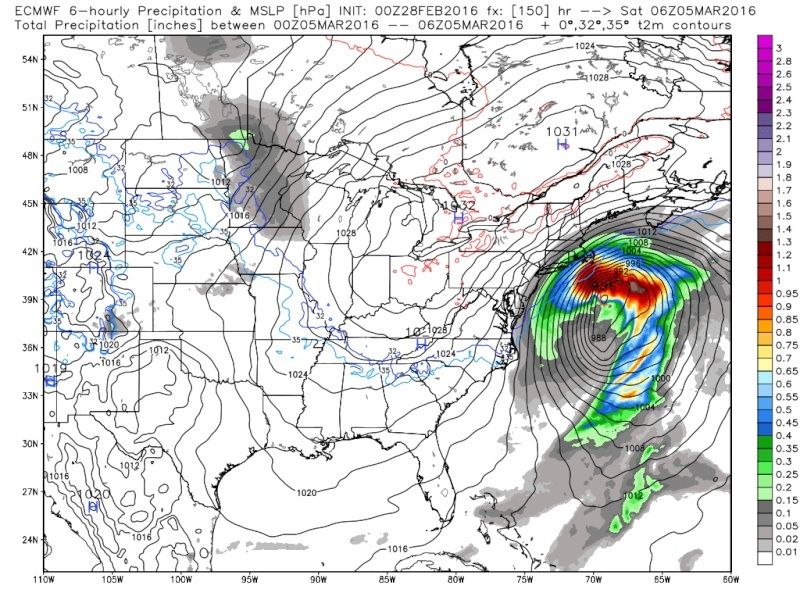 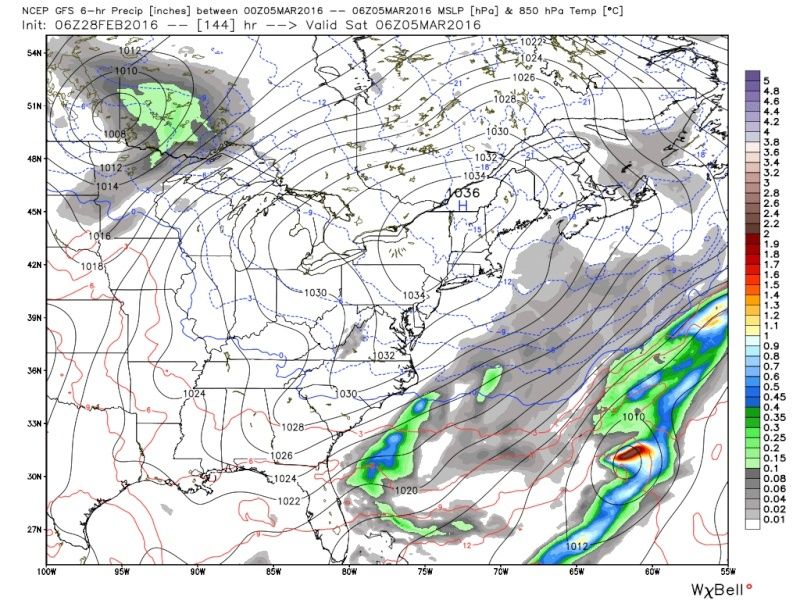 A winter storm is possible on Friday of this week. Here is the 500mb pattern leading up to this event valid Thursday afternoon. 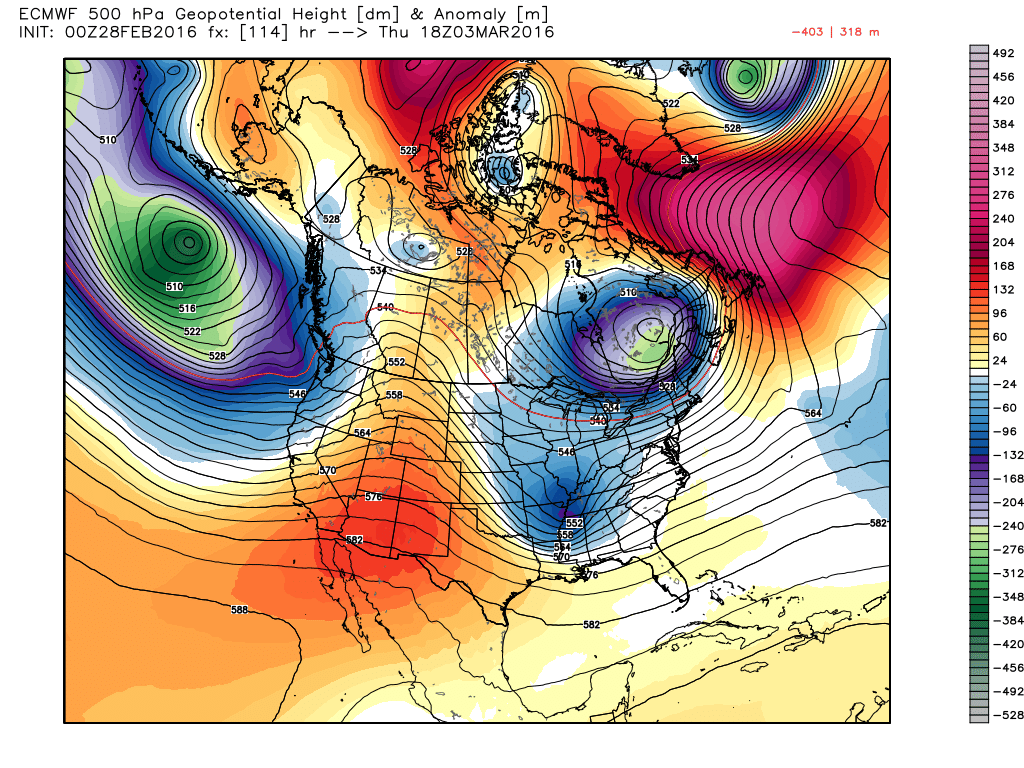 The southern short wave is nicely digging into the eastern CONUS in response to the western ridge. There PV is in southeast Canada and there is a transient ridge over the NAO region acting as a -NAO. The problem with having the PV located in that spot is it surpresses heights and risks the storm system to shear out or stay south and meander out to sea. The ridge out west is also collapsing east so this is still a progressive pattern which makes phasing / timing very important. 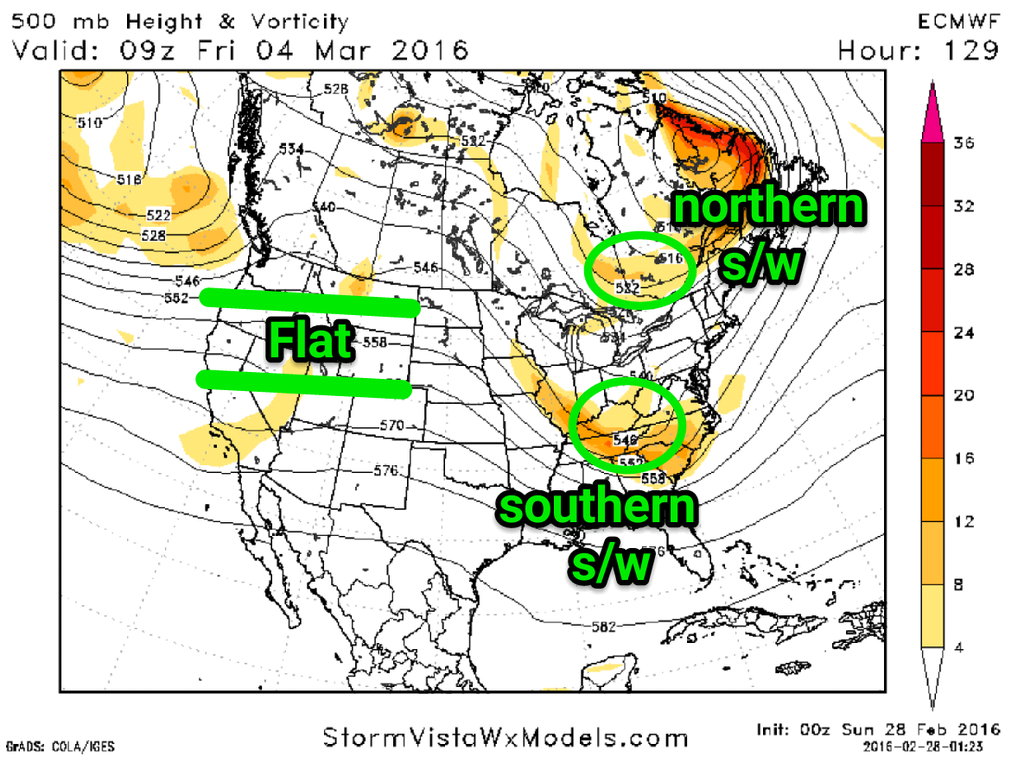 Here we are early Friday morning now looking at the vorticity map from 00z EURO. Notice how heights in the west go flat. What allows a storm to turn the corner and come up the coast is a piece of northern s/w breaks off the PV and phases into the southern s/w. That's another thing I'm worried about. Relying on s/w to break off the PV can be risky.

This event is contingent upon the orientation/behavior of the PV lobe in Quebec IMO. If one compares the 06z GFS and 00z ECMW valid 00z Friday, one can see that the major difference is the handling of the vorticity associated w/ the vortex. The PNA spike in the Rockies is actually slightly more meridional on the GFS, and the axis approaching the Plains is near ideal for this time of year due to increasingly shorter wavelengths. The GFS depicts an elongated piece of mid level vorticity hanging SW of the core vortex which acts to destructively interfere with the amplification of the short wave (height suppression). Euro depicts much more consolidated vorticity around the vortex core in Quebec, thus allowing more room for amplification. So, to me, that's key. We're beginning to enter the euro's high skill score time frame so hopefully it is more accurate there. Though the GFS has been a tough rival at times, and I'd feel much more comfortable if we saw some correcting toward the euro. As has been discussed ad nausem, the larger scale signals support this period. Now it comes down to - can we get the smaller scale features to behave properly.

Tom quick question regarding the MJO forecasts: What is the difference between the two GEFS and the Two ECMF forecasts. In the images below the second image for the respected forecast is the supposed "corrected" forecast; at least that's what Ive heard. What does that mean exactly?

I hope the Euro shows its verification score the well 5 days out with this next storm - if we can get  this to work out it woudl be a very nice storm for our area.
Reading up on posts and watching JB's Saturday summary he points out some interesting points that the GFS is struggling with - it always seems to be doing this - PV orientation, Aleutian Low that it has in a much more sw orientation thus dampening the heights along teh WC where as the Euro has it more NW and allows the heights to rise over the central rockies. If we want a storm to come up the coast we need a ridge axis over this region - 4 corners up to Montana N/S preferably.  I hope to see the gfs move towards the euro solution the next round of runs. keep in mind we have not seen our storms snow storms come about until 2-3 days before hand. Just my opinion here.

This is what we all want to verify and hold serve

I guess as I've said before it all comes down to your point of view.

This is the second warmest winter in history, and take away the blizzard and NYC has had 4.4 inches of snow all winter. Add in only 20 days below normal out of the 91 days in December through February and this winter is a total flop.

I suppose for those that want to look at this misreable winter? as favorable Uncle W summed it up on another forum very succinctly, "This is the best lousy winter I have ever lived through".

The OTS scenario doesn't surprise me at all. Murphy's Law and all. This winter has been an absolute joke. 70* on Christmas, storms going south and east and me getting nothing to cutters with 60 and heavy rain. Major fail. Grade F.

i agree so much potental this winter stinks i will grade this winter a d .i just want this winter over with and i look forward for spring

so the cmc still gives us a nice snowfall for Friday and gfs slowly coming around...

east but better than last run

Even if transient wow... 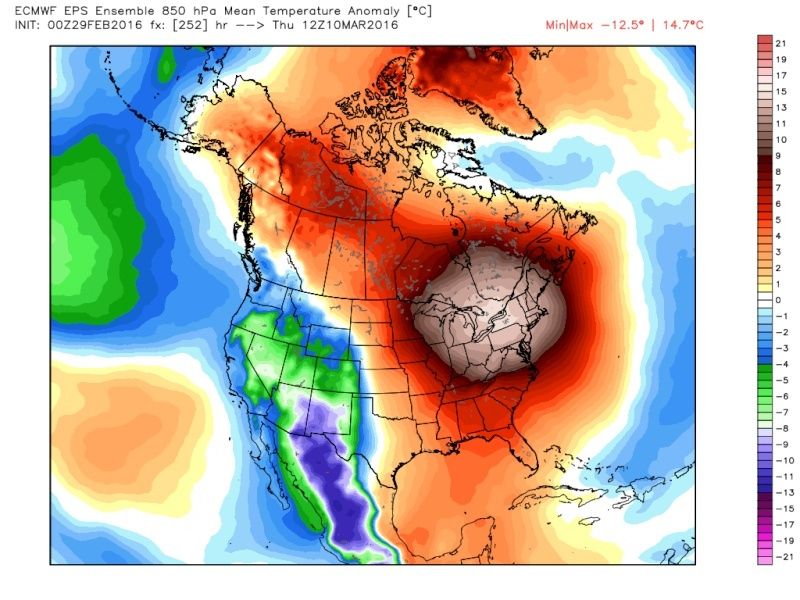