that is one heck of a sharp turn not one heads into gulf. One thing is we have very strong consensus up to haiti. I fear for them.

mugs if you look back at the euro ensemble plot of all LP I updated the 12z Euro you posted the 00z, note how many more euro ensembles around now up the coast and do hit the area and at a very strong intensity. Yes its still split but could be the start of a trend. BTW the 18z GFS gusts in maine are 105kts at landfall!  Yikes if this gets captured just a bit sooner, much stronger than Sandy wind wise. Only one run though of course.

GFS rolling, lets see if it trends in any particular direction or seems to continue to struggle with the setup such as that strong double barrel system depicted at 18z needless to say unlikely to verify but shows its struggling with the setup.

Good god a cat 5 headed for the area, holy crap... 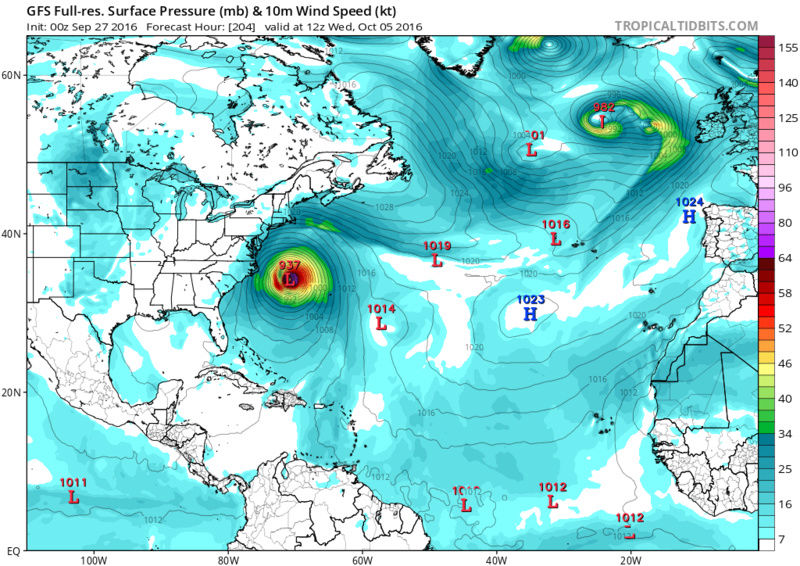 Unfortunently this run is more realistic, hard to believe cat 4/5 but still yikes 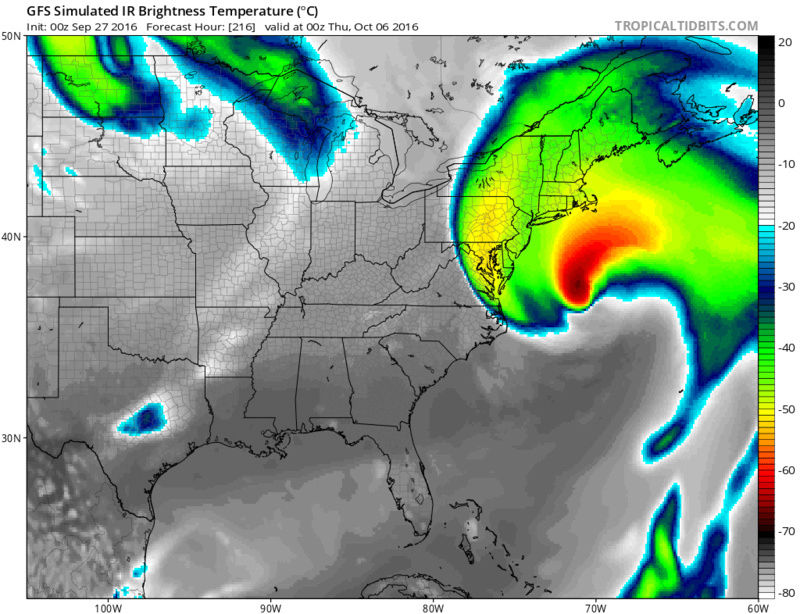 WOW, just one run but 930mb scary unimaginable if this is anymore west cape cod is done for if this verified, its close enough to wreak havok due to sheer size. 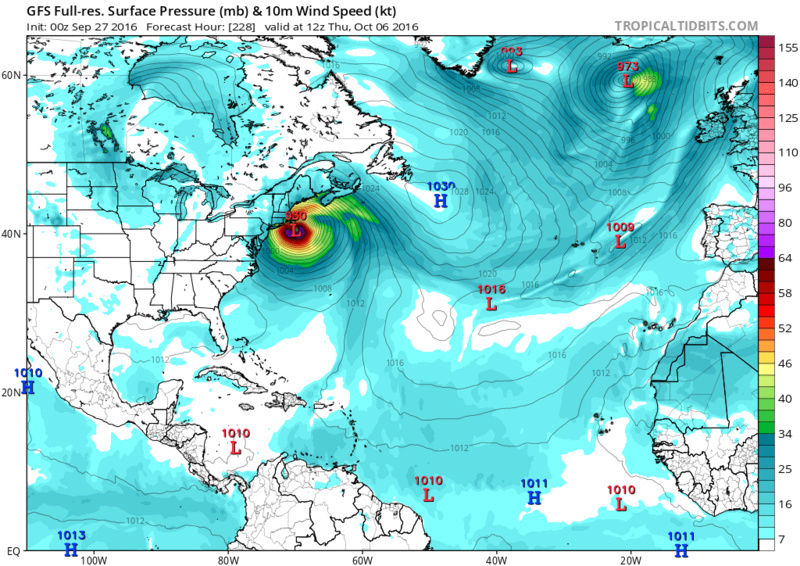 Wow, does this catch anyones attention? on that note the CMC is also well west. Everything is west now. Let see if this continues or stays. 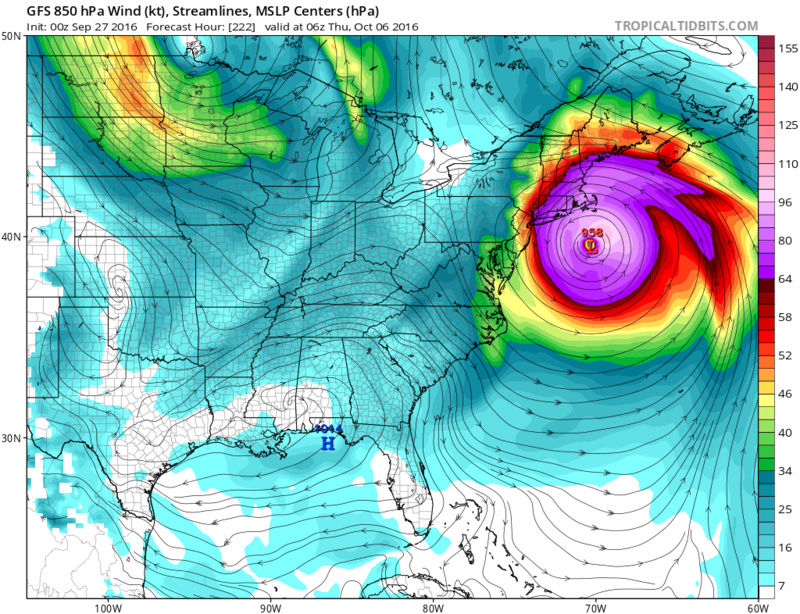 CMC makes landfall in NC then east and disipates quick. West moves seem to be coming together, still way out but moved up a bit in time too. GFS at closest pass is late next wed night.

Ominous to say the least. It's tough to put stock in any models however until we have an actual tropical cyclone.

True enough just do not see runs like this often thought I'd post it. Also out of Fantasyland but still 8 9 days away. As frank said by weekend we can start take this to real concern. It's already unerring to a degree.

CMC has odd evolution of tropical dynamics and handling of phased vorts and systems at play. While it may have a correct idea in a more western inital track as it matches other guidance ATM evolution of the storm afterward (cutting off near Hatteras, stalling and dissipating heading due east) doesnt make much sense. A western track would seem to cause a capture and northwest movement in this case, not a weak stall and then eastward movement.

I think we see td after recon tomorrow. I think it may already b it's impressive looking.

Its closer overall than the 18z run but doesnt hook in as much. To me the GFS looks like its struggling with the setup, the ULL beforehand is a contributing factor the GFS is probably handling differently and I dont expect consistency until its out of the way. Like I said its a complex setup and a long week ahead.

0z EURO holds serve, 0z NAVGEM is just mere miles off the eastern Florida coast with a 960mb hurricane tucked in tighter than the CMC when the run cuts off at hr 180.

euro did not hold serve. there are huge changes with this system. here is 500 mb

00z
trough/ridge is significantly weaker.
12 z if taken out further storm has no chance to enter gulf. 00z most likely track is gulf into western fla and up the coast over land. storm probably doesn't affect us coast until sometime next weekend. all options still on the table.

Don't have time to post but yikes 06z gfs! 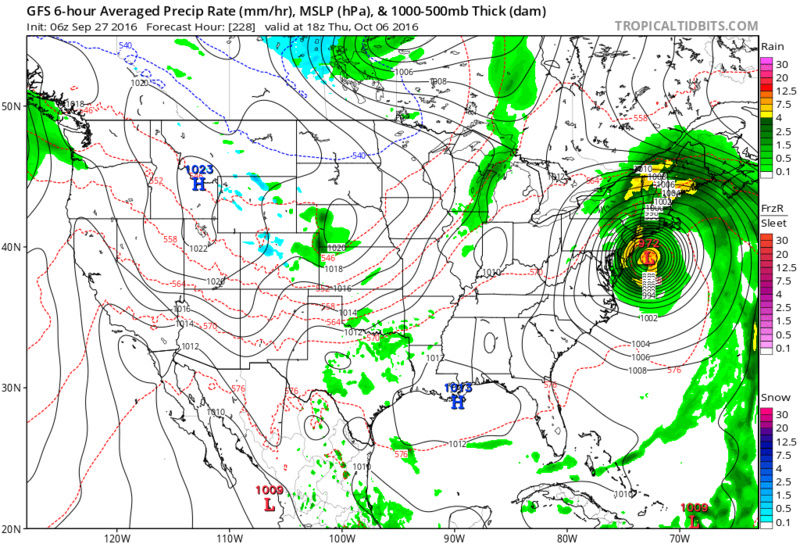 6Z GFS shows a worse case scenario. God help us if this were to happen.

There will be a Hurricane to track.

What we don't know:

I'm not getting hyped for a couple of reasons. First, and I think Scott mentioned this a couple of days ago: The trend all Summer has been for all modeling to develop these systems in the open Atlantic or Carribean and then take them on a typical recurve course of some degree. However, the only storms that we have seen develop in these areas have been storms that came off of Africa north of about 13N (roughly, I'm going off memory). Once they developed they made a B-line to try to go visit Santa. Every other system we have seen this summer has been plagued by unfavorable conditions that did not abate, even though they were forecasted to, until the storms were very much closer to the mainland US. So far, that trend seems to be holding true with this system; although large, there is no organized center. As it continues at this latitude, it will have to start fighting off even worse conditions with climatologically desert-like air being downsloped and advected into it once it nears the northern coast of South America, which again argues for late development.

The second reason that I'm not hyped yet is because look at our modeling; up until about four days ago this cutoff for the end of the week was supposed to be embedded in a transient flow and blow through here in a day. Now it's going to completely cut off and meander for almost four days, which is something that wasn't seen. Hermine's situation was also something that was supposed to be cut and dry but again we had a cut off appear in the modeling just days before it was to be up here and heading out to sea. My point is, with the way this year has been, I would not be surprised to see this tropical system be over-modeled, again, and watch it make it all the way into the interior Carribean/Central American coastline before finally getting a chance to pop , which would limit our sensible impacts to enhanced rains along a front or eliminate them altogether. However, if it does develop, I would not be surprised to see the central trough that is currently looking to try to capture this system end up trough-splitting and have the cutoff somewhere in the southwestern or centrism US as the northern piece races away to the east and only impacts areas north of the Ohio River Valley. Not saying these runs are concerning, but in looking at the season's trends, those are my thoughts.

Funny frank but it really is true. Like u said by weeks end hoping we know more. Rb there's always that one that can surprise. Nhc actually said it could b or already has developed. I also read that it should be able to fight off shear etc due to its size. Ur the expert though so.I respect ur anslysis. All we can do is continge to monitor. Last 2 runs were very bad on gfs.