Temps this month are averaging about 2* above normal for area mainly due to dry conditions. Polar jet has mostly been south of us with frequent cold frontal passages but convection has consistenly been to our south. Trough has been parked in east with pieces of ridge out west breaking off and moving over us but quickly followed by cold frontal passage. Looks to be the same pattern moving forward. No prolonged ridge in east. If wet pattern develops we will get below normal.

Dew points at newark today as low as 54*. Rh in the 30's. Very comfortable. Heat indices are barely going to hit 95 for most of this heat wave. 80* with dews in the mid 70's are worse than this upcoming heat wave as dews remain below 70*.
Nws disco...
LONG TERM /SATURDAY NIGHT THROUGH THURSDAY/...
High pressure builds into the area Saturday night into Sunday.
Temperatures will be in the upper 80s to lower 90s on Sunday and
Monday with dewpoints in the 60s, but heat indices at this time are
expected to be below 95 degrees.

Low pressure moving through the Great Lakes Monday...will push a
warm front through the area Monday morning followed by a cold front
Monday night. Scattered showers/thunderstorm are possible Monday,
with convection ending early on Tuesday. Dry conditions return as
high pressure builds across the area on Tuesday and remains in
control through Thursday. Temperatures on Tuesday will be in the
upper 80s to lower 90s with dewpoints in the mid 60s to around 70,
allowing heat indices to climb into the mid 90s once again.
Temperatures slowly fall back to near normal towards the end of the
week.

I'll take dew in the moderate 60s
NWS forecast for me have mid and upper 90s starting tomorrow then down to low 90s into next week. Air temps alone are at advisory level.
but yeah, its not warning level heat without 70*+ dews

Get ready for storms this afternoon for our area:

@amugs wrote:Get ready for storms this afternoon for our area:

Man this year has been awesome so far for svr weather potential, and it seems ive been in or very close to the hotspots more times that I can remember. Usually these things have not worked out in past years but this year (even Frank who as far as I know only one here directly effected by tree damage) has been happening when SPC calls for it.

They extended the slight area to include NYC and parts of northern NJ, it was more north yesterday. Its going to depend a lot on cloud cover though the discussion said. Right now its pretty sunny here which will add fuel to the fire.

So far the sun has been blazing here it is HOT & humid and oh so uncomfortable for me anyways. If it stays like this those storms later are go be rockin'. What happened to this evenings thunderstorm threat ? Not much on radar ?

@ak926 wrote:What happened to this evenings thunderstorm threat ?  Not much on radar ?

@ak926 wrote:What happened to this evenings thunderstorm threat ?  Not much on radar ?

It was always a very isolated event. Didn't make much out of it. Our next real chance of rain is Monday evening.

Did you all see the monsters in CT and MA! One warning was for 80mph winds and half dollar hail. I am hearing a lot of damage from that random swath of storms. What made that area light up and not at all over here? 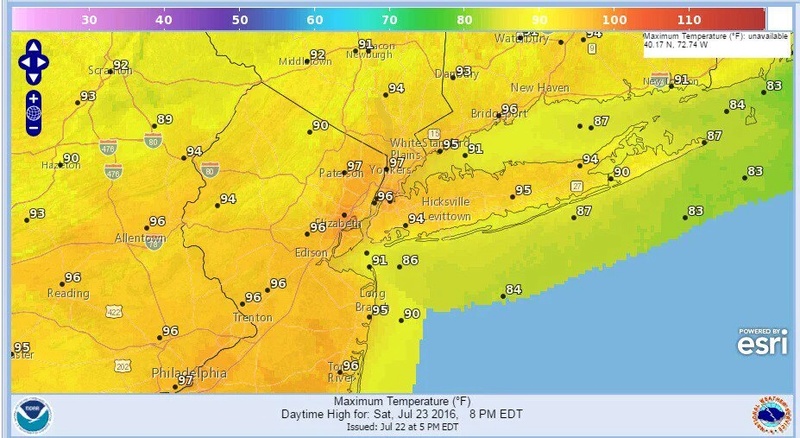 Down to 82. The current low temp. Maybe a few places will hit 100. NWS now forecasting a high of 99* for me. 99 on monday as well but on a SW wind so that will be with some more humidity, that looks to be a very brutal day.

What sunblock? Won't find me outside in this heat!