An MCS will be tracking east toward the coast beginning tomorrow, but should not arrive here until Thursday early afternoon. The difference between this MCS (one that I feel will prevent it from reaching "Derecho" status) is that a phase will be involved with a piece of upper level energy over the Ohio Valley. This phase is what will turn this MCS into an MCV (v = vortex) and turn it northward and toward NYC.

Looking at severe weather parameters, they are interesting. There is not much CAPE to work with, but Bulk Shear is CRAZY high. Take a look at the latest 12z NAM Bulk Shear (in knots):

At this point in time, I am giving more weight to the GFS than I am to the NAM. I would like to see what 12z GFS says.

As of now, expect damaging winds and torrential rainfall that will lead to flash flooding on Thursday. I do not think tornadoes will be an issue since instability is high, but we'll see what other models have to say before we make a definite conclusion.

There will be a chat session tonight at 10pm for just an hour. That will get us through the 00z NAM run. Hope you all can make it.

I'm worried about the Nam, it and the hi-res have been completely diffrent the last day. Also, the fact the donestics are pretty dirrent then the international models in terms of LP track, im weary on using the domestics until they agree on the track, at least .

GFS took a jog north with the storm. You're right, it is domestic vs. international models. This was 00z GGEM last night:

Given the performance of the GGEM/EURO with Andrea, I am more inclined to put more stock into them at the moment.

Frank_Wx wrote:Given the performance of the GGEM/EURO with Andrea, I am more inclined to put more stock into them at the moment.

The GGEM has been the best performer the last month or 2. I feel it is correct again with this again in terms of track and precip. But this could be another example of the 2nd class models we have here in the US.

Heights are rising ahead of the surface low. If they get as high as the GFS insists, the SL will track further north. However, the international models keep the flow more progressive so the storm take more of a west to east track. That makes more sense to me

What I dont understand with the GFS is how it has the precipitation shield so far away from the LP center. That cannot be correct . You would think that the heaviest precip would be concentrated around the deepening low.

The 12z Euro (so i have heard) is practically the same thing, moving the low off Atlantic City as well.

Its really hard to argue against the EURO and GGEM......when they are locked in, well they are locked in with a solution.
Also, both show widespread 2-3+ inches, with more in spots with elevated convection.
The way the system stays more south on the GGEM makes sense. The zonal pattern we have, combined with the energy diving out of the lakes,the hP to the south, and the system exiting the area to the north just makes it more logical. The GFS might just be confused with its handling of the system diving out of the lakes and to the north. The northern low is most important, the way it is hanging back will block the LP form moving that much more north than it is modeled now. GFS/NAM will probably correct at the 00z tonight.
One thing about the euro is it is a little stronger than the 00z, that's also something to watch....

Edit: just saw your post Anthony, beat me too it lol

Yea it is going to be a rough Thursday. EURO/GGEM are most likely correct with their positioning of the low. You do not see many MCS' make a sudden turn northward like the GFS shows. This model has been horrendous. They need to upgrade it sooner than later.

SPC moved slight risk into the area for thursday

At first the 18z NAM was a copy of the GGEM. But again, at the end of the run, its pulled north. It did make strides south though.

Its the Only model that has that much interaction that early. It really pulls the precipitation axis to the north before it phases with it, then moving north out of the area. If the energy was slower to interact with the LP, i would have taken a more southerly and zonal track, rather than the NE track it took this run.

Good analysis and is likely the reason why the NAM has come north with the axis of precip shield. That is one hell of a ridge poppin' in the Midwest though. Everything just looks too amplified on the NAM.

GFS has caved partially toward the EURO

I think we have a model consensus after the 6z's this morning. The GFS, NAM, and GGEM have the low as a 996 mb, tracking and then leaving the coast between central and south jersey. The heaviest precipitation axis looks to be just north of NYC, in the HV
Here is my rain map 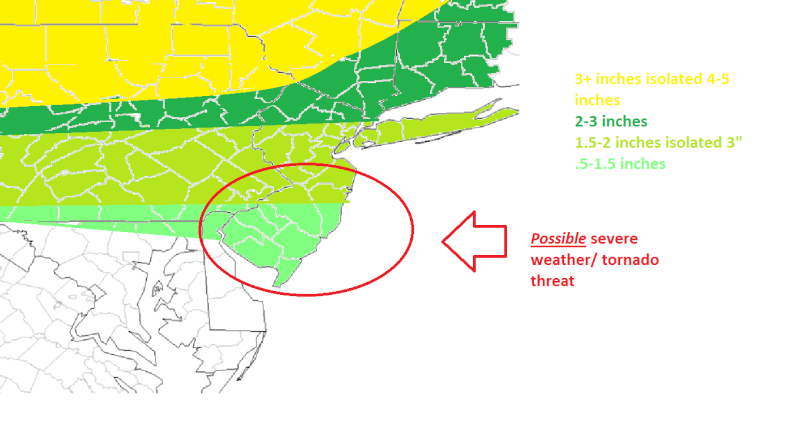 The GFS has some pretty heavy winds associated with it too

Heard the 12z NAM is garbage

What did the 0Z Euro say in regards to the severity of this event? I am subscribed to weatherbell.com and for some reason I cant get anything beyond hour 24, in terms of what the central low pressure is

What the hell is the GFS doing.....wish I was home to look at it....but stay away from it...lol...the domestics have gone out o lunch

I will make a blog with my rainfall map and update the 12z runs.