Figured I'd start a thread on this as we have an active tropical storm on the east coast. And we're not really sure what it's going to do. The other day the models had it mostly remaining in position and dissipating but I'm seeing things tonight which are showing change and peaking my interest. For example, both the GFS and CMC (although drastically different in overall evolution and overall end result, GFS absorbs while CMC keeps seperate entity) show parts of the tropical energy being picked up and juicing up the front which will pass through the end of this week/early next week. Meanwhile some hurricane models such as the GFDL blow it up to a crazy 950s and deepening low as it hits the gulf stream off the Carolinas before the run expires, while highly unlikely, that is a very powerfully progged system. The CMC also gradually deepens it into a fairly strong extratropical system at a higher latitude offshore. The warm atlantic temps favor development and changes in timing can cause large implications in track and potentially our weather or how close it may end up tracking to our coastline. In short, it may end up dissipating and be nothing to worry about, but I believe the possibility warrants a thread.

Personally I think once again models are having difficulty handling another weak tropical system in tight to the coast.  As of this morning Julia has been down graded to a Trop depression.  It has been experiencing moderate-severe westerly wind shear(25-40kts from S to N) which has forced the bulk of convection well east of the surface center; however, a new small burst of convection is noted this morning just to the NNE of the LLC.  The other thing to note here is that the LLC is further offshore than has been prev modeled.  The reason this may be important is the interactions with the warmer Gulf stream waters.

Shear and dry air are the likely culprits for the down grade.  You can see the dry air streaming in from the WSW on the water vapor loop.

Here is the discussion as of 5am from the NHC about Julia:

Westerly shear of about 25 knots has advected dry air over Julia
and removed all of the deep convection from the cyclone center, with
the coldest cloud tops now more than 100 n mi to the east.  Coastal
observations have shown the winds decreasing overnight, with most
locations now reporting sustained winds of 20 to 25 kt.  Based on
these data, Julia is downgraded to a depression with an initial
intensity of 30 kt, which is in agreement with a blend of the latest
Dvorak Final-T and CI numbers from TAFB and SAB.  Despite the
cyclone being situated over warm SSTs, persistent shear and dry air
should result in little change in intensity during the next few
days.  Remnant low status is forecast at 72 hours, but this could
occur much sooner if organized deep convection does not return.  The
remnant low is forecast to dissipate in 4-5 days, consistent with
the latest GFS and ECMWF solutions.

Julia has moved little overnight, and the initial motion estimate is
a slow eastward drift at 2 kt.  The shallow cyclone is expected to
continue drifting eastward today and then meander in weak steering
currents until dissipation.  This forecast is based on the latest
GFS and ECMWF tracks and is similar to the previous official
forecast.


Notice the NHC is going solely off the GFS and Euro forecasts.  However, both models if you recall were one step behind the RGEM and CMC under 48-72hrs when it came to Hermine's winds and eventual move back west much more pronounced than both the Euro and GFS showed.  The RGEM esp was the first to catch on to the dramatic move back to the west.
Here are the GFS, Euro, CMC, and RGEM forecasts for 06z Sat.  Notice the Canadians are much stronger. 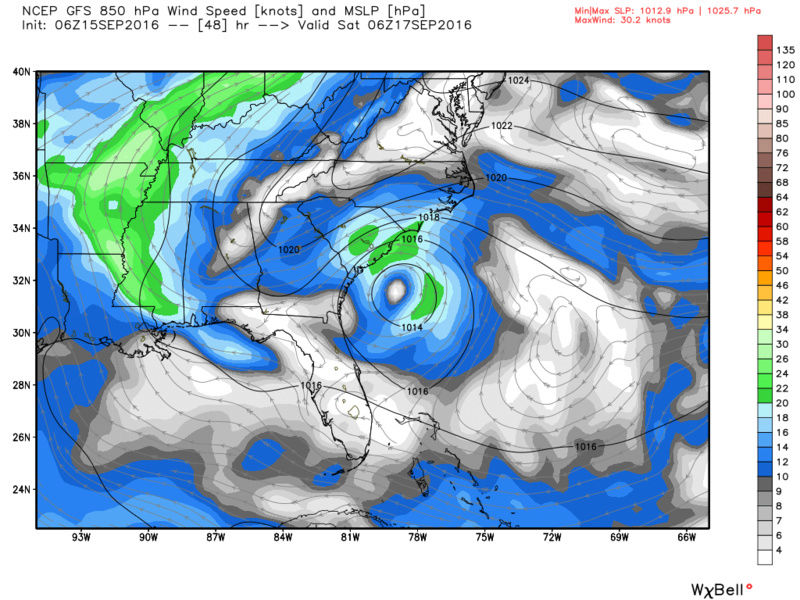 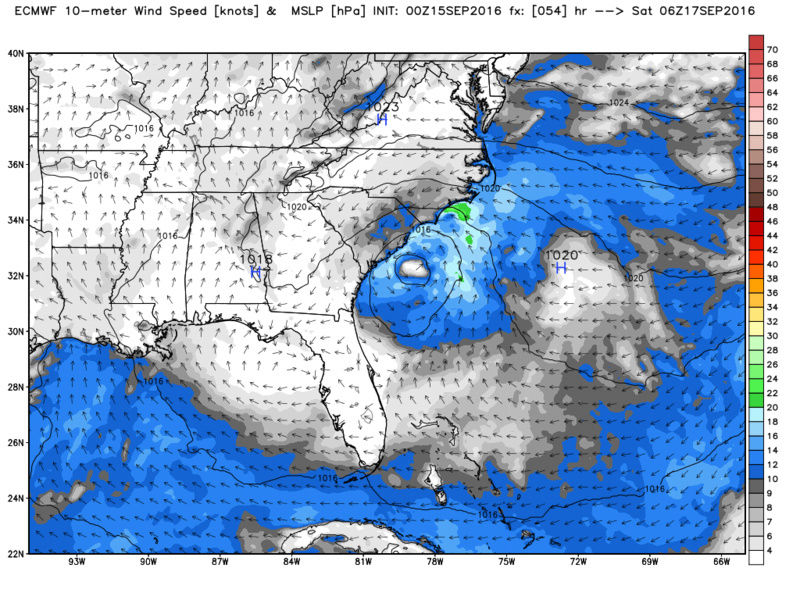 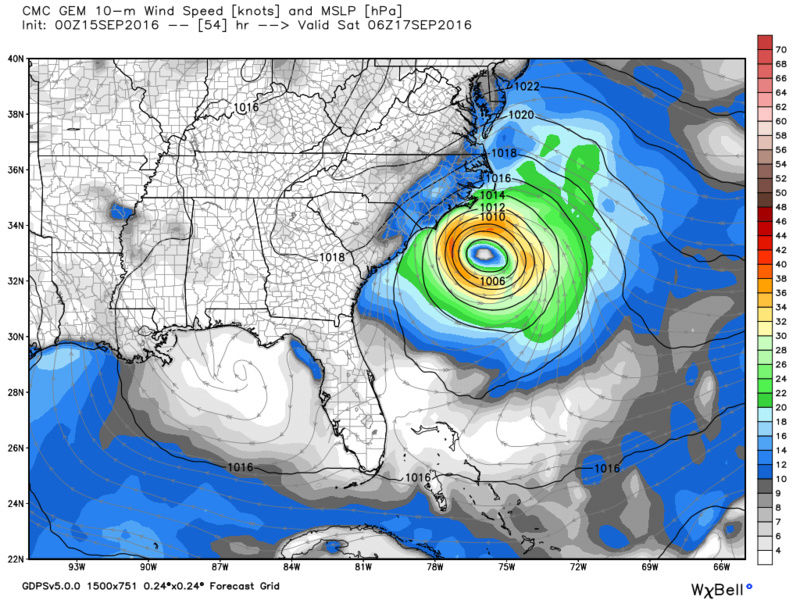 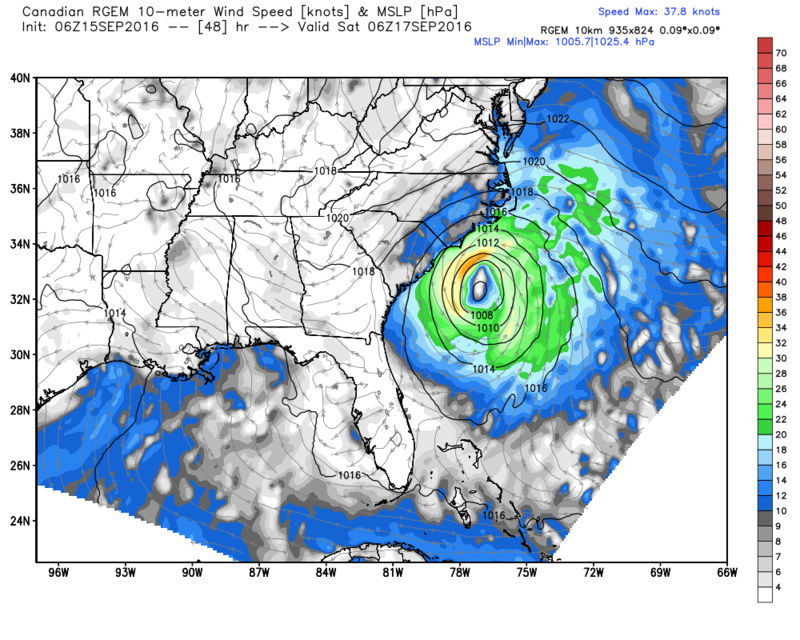 While most of the intensity models do not show much in the way of intensification there are still a handful that do.

While I do not believe that Julia ever poses much of a threat for our region I do believe the NC/SC/Ga coast lines should monitor closely for intensification as depicted by the Canadian models.  If intensification does in fact occur then instead of the approaching front simply sweeping the remnants OTS a slightly stronger system may be pulled back towards the coast a little bringing stronger winds and enhanced precip than is currently forecast along the SE shorelines.  Again the LLC is over the warmer waters of the Gulf stream.  Prob more of a write up needed for a nuisance system but I'm bored. 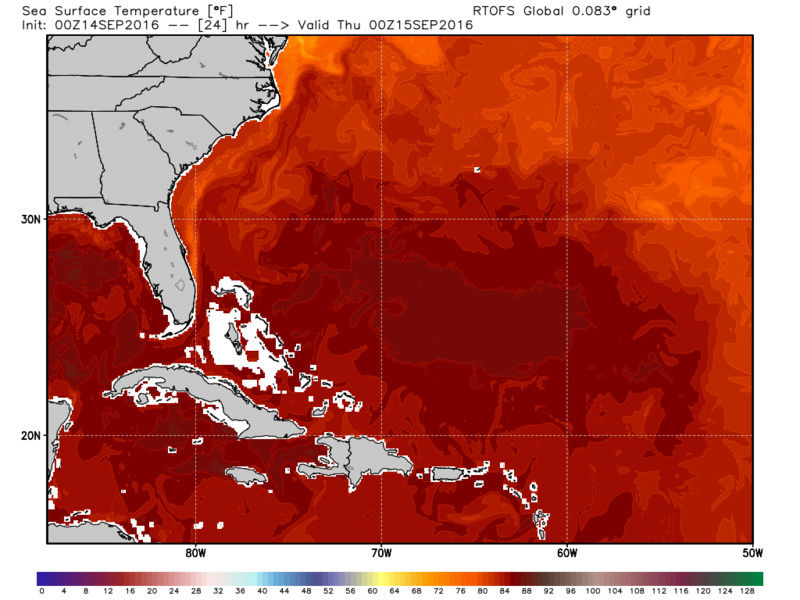 Agreed overall, main storm will likely stay offshore, but 12z CMC still showing the interaction and its mainly being ignored, could provide some beneficial rains for the area if it verifies.

Still a wide spread of solns and tropical systems are unpredictable which is why I opened the thread. My main concern for our area would be just rip currents and hopefully some tropical enhanced rainfall we need.

Note what the 12z NAV does with it too, again, not trying to intentionally pick the worst models, but this suite picked up on Hermines general track, JMA shows over an inch of precip too but we know it has its low res and wet bias.

This front looked very dry a few days ago, maybe a quarter inch of precip or so, I'm def seeing more interaction on today's runs before it gets kicked out or is absorbed completely and turns into a little rainstorm for the area like the NAVGEM shows.

And yet another solution, probably a fluke, the HWRF splits Julia in two, one piece rides up the coast and actually looks more dominant at a point, while the other roughly remains where it is now.

As I've said, the Atlantic is volatile and bears watching.

And unsurprisingly, its caught "in the loop" which explains why it will have trouble moving and the models dont know where it goes next, depends on where and when the flow finally picks it back up and which direction it steers it.

0z CMC tries to show more interaction or so it appears, passes to the east of benchmark but trough seems to try to phase with it.

This one looks to me like it could come close to being a potential sneak attack or unexpected brush to coastal areas, to me it bears monitoring and imo thread should not be dead, TD12 is a threat but much further out and as winter goes "one storm at a time".

As well as the HWRF hurricane model being consistent with a secondary low forming off the NJ coast along the frontal boundary when it hits water, something could be fishy here.

NHC latest seems to hint at recognizing the Canadian soln for Julia.

Julia continues to feel the impact of 25 to 35 kt of westerly
vertical wind shear, as the main deep convection remains about
40 to 60 n mi east of the low-level center.  Various subjective and
objective satellite intensity estimates are near 35 kt, and that
remains the initial intensity.  It is noted that buoy 41002 located
about 55 n mi northeast of the center is reporting winds of less
than 30 kt, so it is possible that initial intensity is a little
generous.

Interesting, a sneak attack, I guess you never know and until a few days from now I do not think we will know what Julia will do. If anything.

Look above the intensity model keeps updating, the webpage must be embedded, 18z shows a lot more having it reintensify many to strong TS force and some insanely to cat 2 or 3 hurricane.

Latest SREFS and NAM seem to try to tug it north along the frontal boundary before shunting it back south, odd solution... but saw something similar on last nights CMC, storm made a very large loop. Solns still up in the air.

Will this influence Karl?

Possibly, like in winter, when storms hang around they often cause the following one to go out to sea. Not 100% set in stone rule but I see a gap in the Atl. ridge for Karl to make a sharp recurve generally toward Bermuda and not be a US threat but things are always tricky with tropics.