There will be three phases to determine the outcome of this storm.

There are still differences between models on both intensity and track regarding what happens to this system over the next 72-84 hrs as it enters the eastern Caribbean.  The outcome of these differences are vitally important beyond this time frame.  Below are the differences between the GFS and Euro vorticity maps at 850mb by hr 72. Notice the differences in just how tight the spin is at 850mb.  How strong the system is as it enters the oval area in the E Caribbean will play a role going forward.  In addition the track into this area, ie: how far N or S will also play a key role in the evolution beyond this time frame and models are still differing from GFS to Euro and from run to run within a given model.  A subtle difference N or S and/or intensity differences, could alter the evolution and subsequent model outputs beyond this time frame. 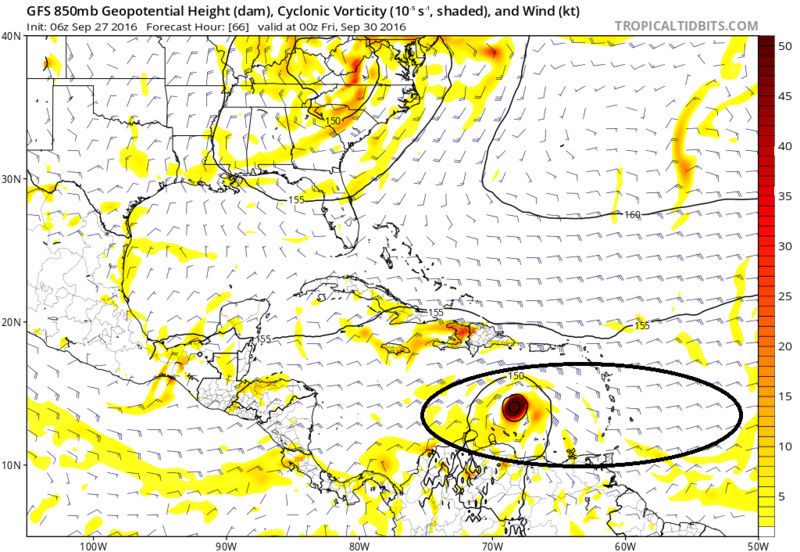 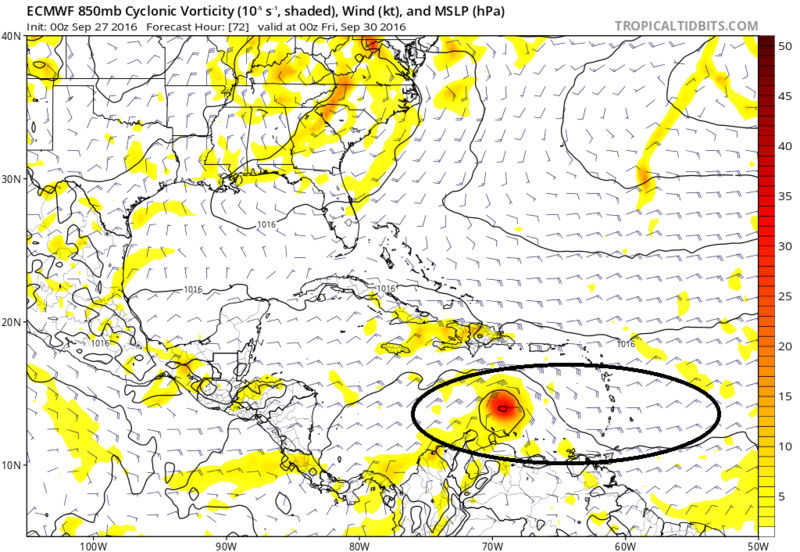 Now before we move to phase 2 lets look at current conditions.

97L conts to slowly organize and as per the NHC this morning there is a 90% chance of tropical development within the next 48hrs.  Now how far that development goes is yet to be determined.  I still believe it will cont to struggle and am leaning towards the weaker soln of the euro in the short term as there is still moderate shear out ahead of it and to the N.  That said there is a nice outflow channel in the upper levels on the N side which I leading to nice Upper level divergence and lower level convergence currently.  However as we enter into the Eastern and central Caribean we will have to see what the low level easterlies are doing as it may create a low level divergence that could slow the development as well.  Also if its too close the SA coast it will entrain dry air from the mountains along the coast which would slow the development further.  We will have to see.  Lets shift gears to phase 2 of track and development. 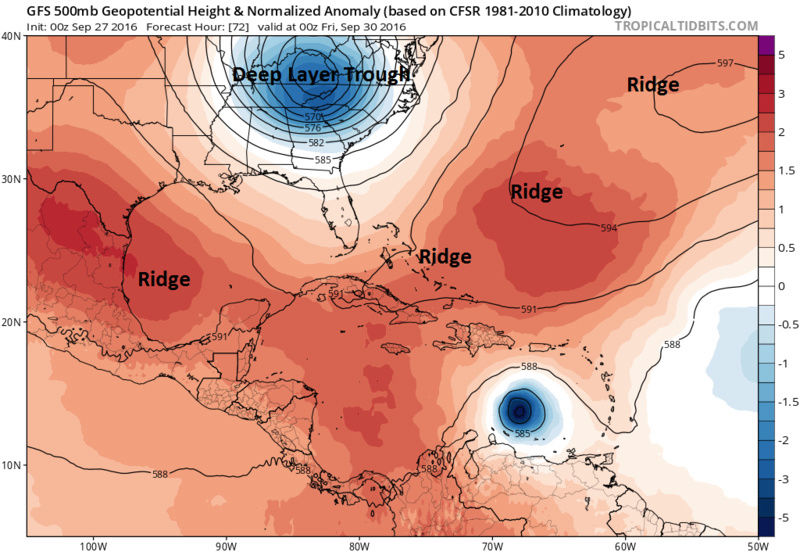 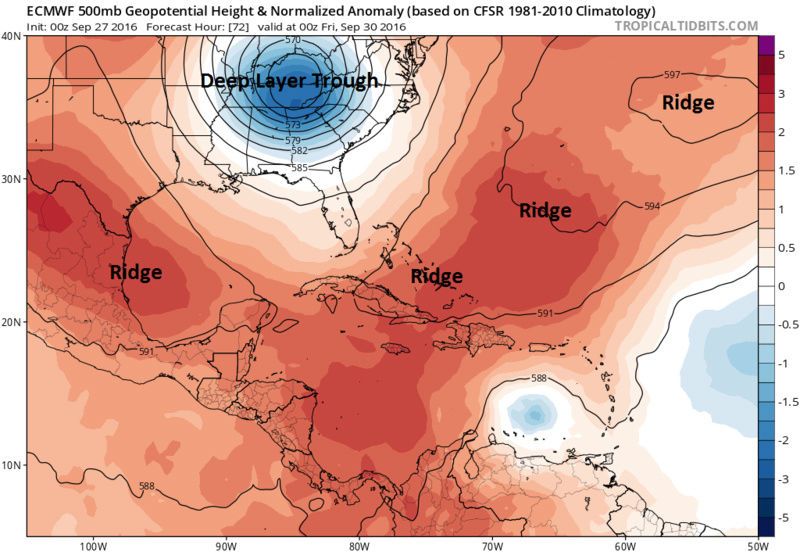 Here is now 500mb at hr 72.  Notice once again the differences in strength and subtle differences in position of the system.  Also take notice that the Ridging and Deep Layer Trough(DLT) over the eastern CONUS is about the same on both models.  As we head out in time we begin to diverge.

During phase two we have a few key things happening.  First involves what we just dicussed.  Simply stated the stronger and or further N the system is between hr 72-96 the more likely it is to erode the western flank of the Atlantic ridge attacking it from the SW.  Combine that with the fact that the DLT over the E Conus will try to attack the Western flank of the Atlantic ridge from the NW side.

The second key to phase two involves what happens to the DLTmoving forward.  There will be a trough split.  What I mean by that is the main trough will eventually begin to lift out NE, but a piece of that trough will split/break off of the main trough and stay behind in the GOM.  This is modeled to happen on pretty much every important model with differences in how its handled in strength, positioning, and timing. 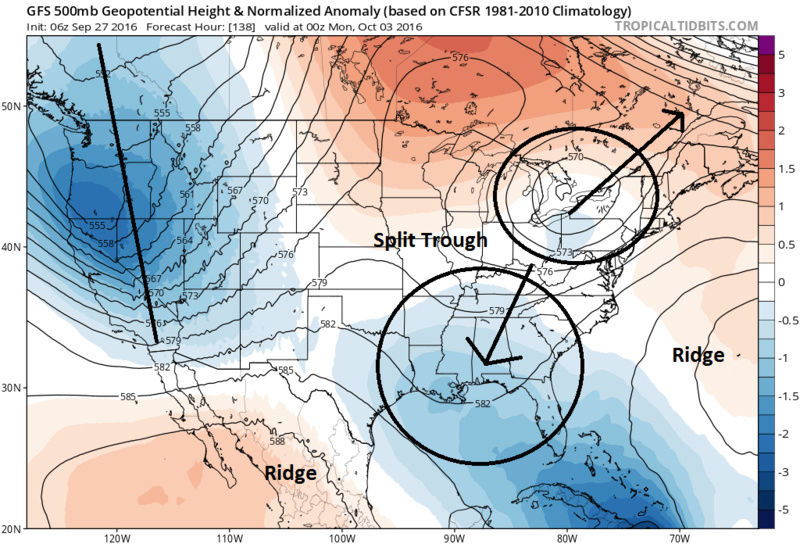 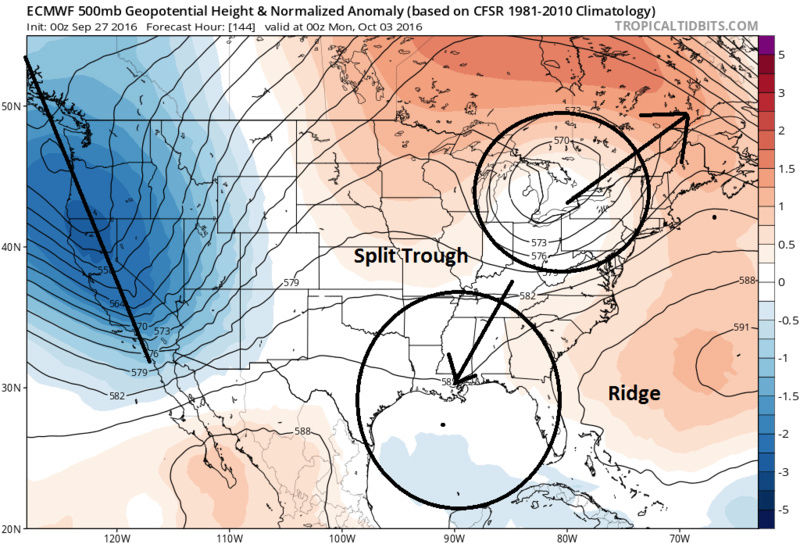 So as you can see by hr 138 the main trough is lifting out to the NE and a piece of it has split and backs up SW.  As you can also see the GFS leaves a much stronger piece and is deeper than the euro.  The result of this, combined with the fact that the GFS has a stronger system in the Caribean which has broken down the Atlantic ridge more, allows the split trough to pull the system N sooner.   Notice the Atlantic ridge on the Euro.  Its still much further west in towards the SE coast which allows the system to cont west in the Caribbean longer before being drawn N by the Trough.

Now take note in the image above of the Trough along the west coast as this may or may not be an integral part of phase three of the evolution of the track and intensity depending on where the system is as we move ahead in time. 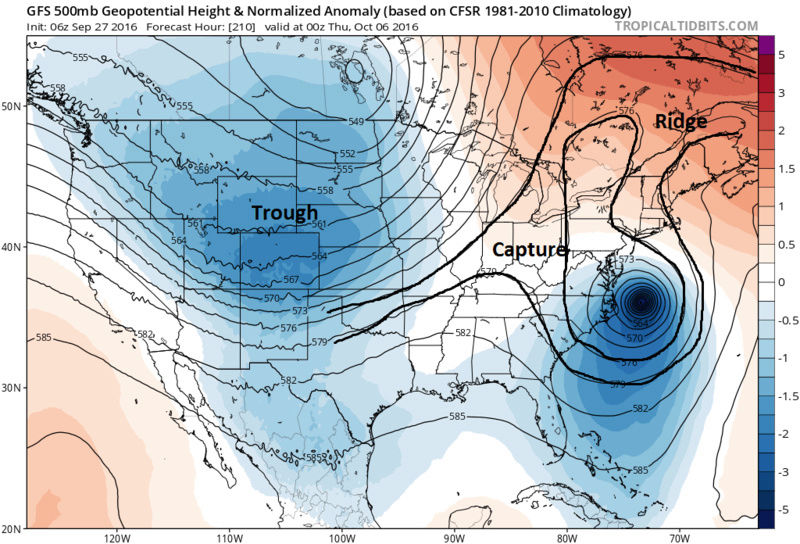 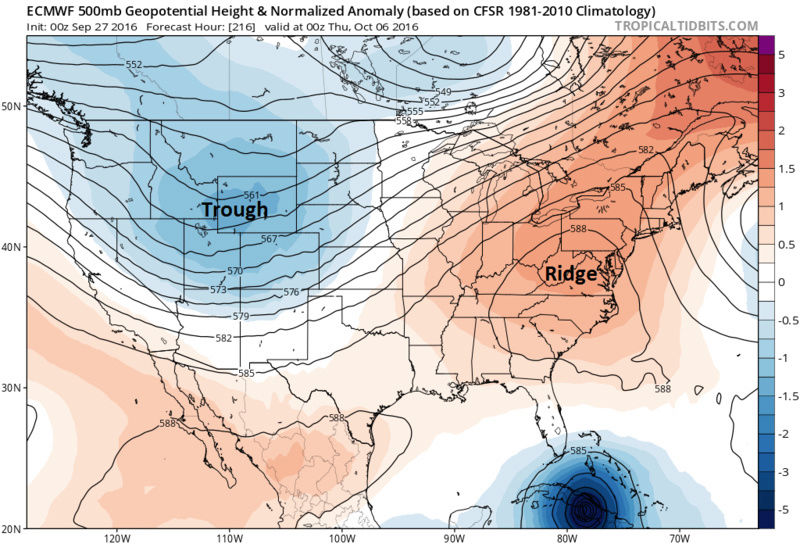 I am not going to get into much detail of phase 3 yet because there simply are too many variables to get through with phases 1 and 2.  I will say that if the system is off the EC somewhere and the timing of the trough is right and esp if that trough tilts negative it will capture the system and pull it back towards the coast.  Part of that soln also involves the Ridge to the N placed such that it blocks the system from escaping OTS so it has time to be captured, and also, not shown here, is how strong of a +PNA ridge west of the trough will there be.  The stronger this ridge the more likely the trough digs and tilts negative which is captured would pull the system NW.  However, if there is a weaker PNA ridge and a more Neutral or even positive tilt, if there is a capture the track would still be more northerly or even NE the more progressive (or positively tilted) the trough.

You can see the capture soln on the 00z GFS from last night vs the slower soln by the euro which might actually take it into the GOM before being captured and drawn N.  Again waaaaay too much to get through to even discuss much further with phase 3.  What Ill leave you with is the GFS ensembles are clustered off the EC whereas the Euro Ensembles still have a large group making it a GOM track.  Like Al said above all long range solns still on the table.

Abput as good an explanation as anyone could give right now. Thanks sroc. U do this so quick I dunno how. Ur insights are always gr8.

@jmanley32 wrote:Abput as good an explanation as anyone could give right now. Thanks sroc. U do this so quick I dunno how. Ur insights are always gr8.

Wow gfs ensembles are nearly all with the operational or close. Very ominous. I think mathew will not escape a us landfall but where is the question at hand. I hate waiting not knowing so I hope by this weekend we have much better consensus. Oh and all models are coming closer to 5th 6th time frame so not as far out as it was. Some of the ensembles have approach as soon as 192 hrs.

Oh btw levi has put out 2 very good videos. Am mobile so can't post but I recommend watch.

@jmanley32 wrote:Wow gfs ensembles are nearly all with the operational or close. Very ominous. I think mathew will not escape a us landfall but where is the question at hand. I hate waiting not knowing so I hope by this weekend we have much better consensus. Oh and all models are coming closer to 5th 6th time frame so not as far out as it was. Some of the ensembles have approach as soon as 192 hrs.

Yes they're very unusual looking. Literal 90 degree right turns many of them.

Hearing blocking has fizzled out on latest runs

Gfs looks to hold its 06z track so far. If gfs wins pretty much no way we don't get a direct or very close to indict hit. If it's between the two like mugs said ya gulf Coast prolly fl and then up ec but would it then go ots instead of up to our area?

Gfs has slowed down a lot looks almost a day or so later bit east too may just b my bad eyes on tiny mobile.

Cmc his Carolinas then scrapes us. Lots of wind and tons of rain just offshore with cmc. Euro is on its own with being more toward gulf. Might the euro fail this time?

@amugs wrote:Skins GFS has a 50/50 and a 1032 HP on its back - this will bottle up the Atlantic and a trough digging in middle of USA to pull it back if it gets there in time

just misses it gets pulled back but only a tiny bit to have outer bands scrape cape cod.

@skinsfan1177 wrote:Hearing blocking has fizzled out on latest runs

Yes skins. Pna neutral and nao positive doesn't call for a very Amplified pattern which we will need if you're looking for a Sandy type event

GEFS is way west and crushes the coast

People are saying the gfs might win out on this one as other models have ticked east. Probably premature to call any kind of trend 8 to 10 days out but the gfs has the most tightly clustered ensembles as does sgetti models. We will have
Genesis soon and nhc info will tell a lot.

@Snow88 wrote:GEFS is way west and crushes the coast

snow what u think the gfs go win out. The euro has been all over the place while gfs has held pretty steadfast. It's looking like this could b a big concern for next week into the weekend of the 8th. But things do change obviously.

Recon has headed out.

Snow what do u use to look at the GEFS which map type? Can u post image of it hit the coast. Is it up here like operational?

@jmanley32 wrote:Snow what do u use to look at the GEFS which map type? Can u post image of it hit the coast. Is it up here like operational?

Euro is slower than the GFS which would mean that the trough has a better chance of catching the storm.