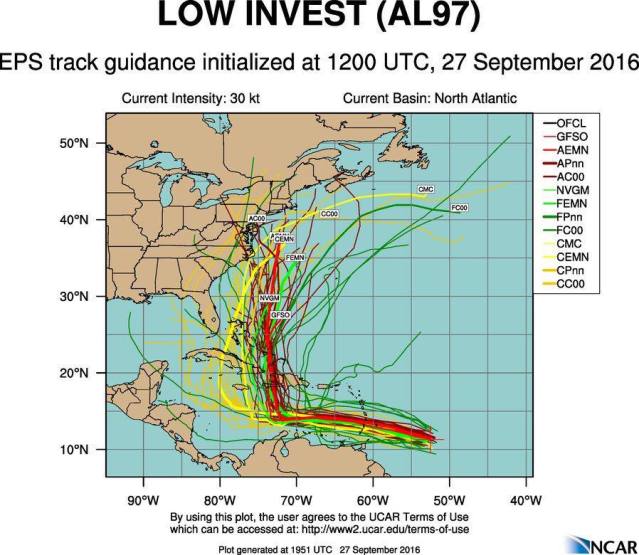 @Snow88 wrote:^ How do we know GFS is bullshit? The storm is a long time away.

Well it's been waffling an awful lot run to run. Something tells me its struggling with the setup but its just a feeling some of us have that it doesnt do as well with these types of systems, but at this juncture yes almost anything is still on the table depending on the end behavior of the ULL feature.

Theres a wide spread at current time meaning the models dont even know where the center is now initalizing wrong and probably affecting the downstream solution in some way, this will be a tough one.

Theres a wide spread at current time meaning the models dont even know where the center is now initalizing wrong and probably affecting the downstream solution in some way, this will be a tough one.

My head is already spinning even before Matthew officially has! Really wild difference between GFS & Euro.

The EPS is what the euro that looks like gfs?

After the Hermine debacle I'll wait till the thing is within 1 day of the US before paying close attention.

Snow I don't think that's the eps. There looks to be other models in there. the EPS mean from tropical tidbits has the low entering the Gulf of Mexico can post on my phone

jeeze euro ensembles all over the place, well west though of gfs. total disagreement.

Guys and gals we will not see a consensus until at least we get a true closed low level circulation which like I mentioned above is currently not present which is clearly seen from the recon.  When there are multiple lobes of spin in the low levels models have a hard time initializing the system in the right place from run to run until its a single consolidated closed LLC.   Latest update from the NHC confirms this.  Although they believe it may be named by tomorrow it would still not surprise me if a named storm doesn't happen until at least Thursday maybe even Friday.  It also wouldn't surprise me to see better organization followed by a brief period of 24, maybe as much as 48hrs worth of regression before the wheels truly get set in motion on development.  Patience is a virtue.

For the North Atlantic...Caribbean Sea and the Gulf of Mexico:

18z looks like its going to be a direct hit, hi-res 935mb off carolinas moving due north, maybe smidge west. Its killing me that the GFS and Euro are so far apart, who is going to be right, when might we know?

Long range forecast for 97L
A large upper-level low pressure system is expected to separate from the jet stream and settle over the Mid-Atlantic states late this week, and the steering currents associated with this low are expected to be strong enough to pull 97L sharply to the north by the weekend, according to a majority of the Tuesday morning runs of the models. While the sharp right-hand turn in Figure 2 might look implausible, there are a number of cases of storms taking such a northward bend, especially in October, with the classic example being Hurricane Hazel (1954). This sharp turn is expected to occur on Friday night or on Saturday, and the exact timing of the turn has huge implications for who experiences the peak wrath of the storm. An earlier turn is being predicted by the GFS model, which would put the Dominican Republic and Haiti in the cross hairs for a direct hit early next week, with a long-range threat to the Bahamas and the U.S. East Coast later in the week. The European model and UKMET model forecast a later turn, resulting in Jamaica and Cuba being more at risk of a direct strike early next week, and Florida and the U.S. Gulf Coast being at risk later in the week. As one can see from the latest set of ensemble model runs (Figure 2), the uncertainties are high. 97L is expected to have favorable conditions for intensification this weekend as it heads north towards the islands, with low wind shear, very warm ocean waters, and a very moist atmosphere. The models are quite bullish on this storm being a hurricane when it makes its landfall early next week in the islands.

@jmanley32 wrote:18z looks like its going to be a direct hit, hi-res 935mb off carolinas moving due north, maybe smidge west.  Its killing me that the GFS and Euro are so far apart, who is going to be right, when might we know?

Good god, bee-line for mid atlantic 920mb!! Thats not cat 1. As I understand it the hi-res is what you wanna look at for tropics for actual intensity. 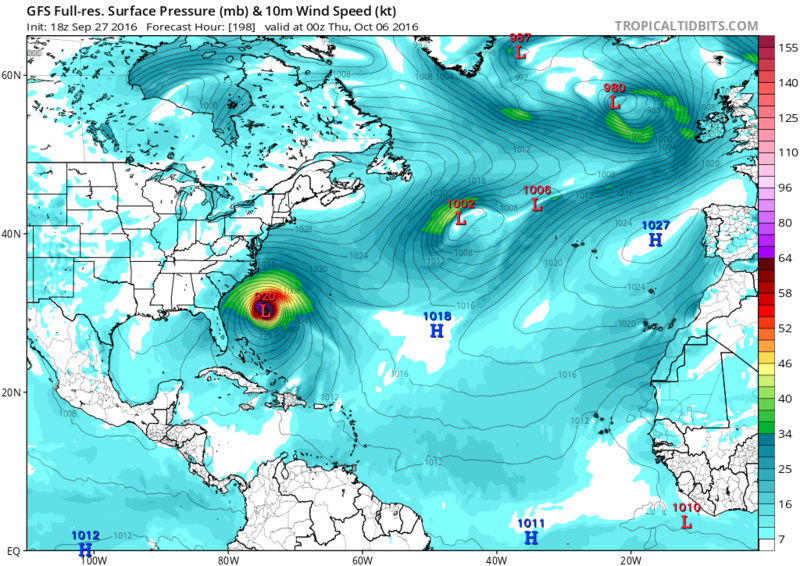 Yes confirming on storm2k that is a cat 4/5. Thats insane if it verified, i think this go be a ugly landfall or near miss.

hummina hummina good god. Sorry guys but these model runs are nuts, yes I am taking with a grain of salt for now but you cannot deny the consistency with the GFS. But sroc is right if mathew initilizes in a diff spot could change drastically, but Frank saying we will need to take this seriously by weeks end is coming in just a few days. Unless he meant sunday. 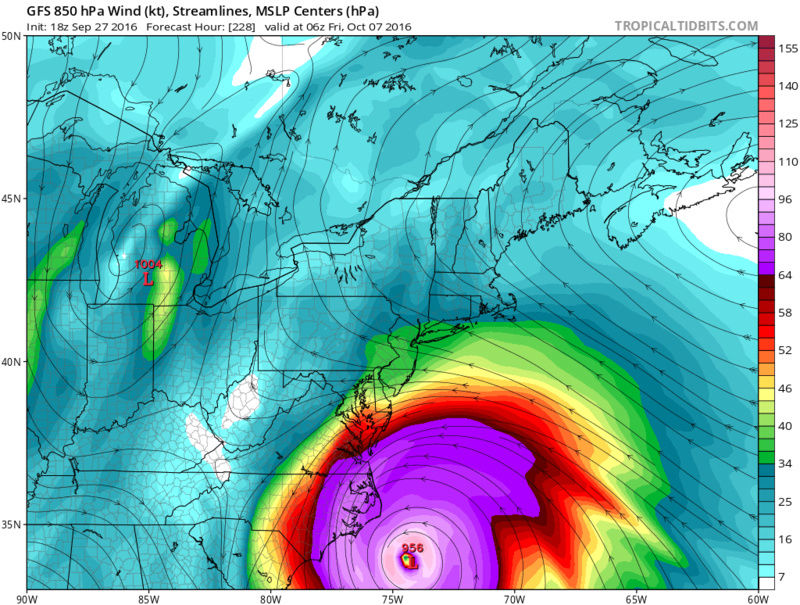 Oy pulls a sandy hard tell exactly where it does it at lightning speed. But holy cow its size. 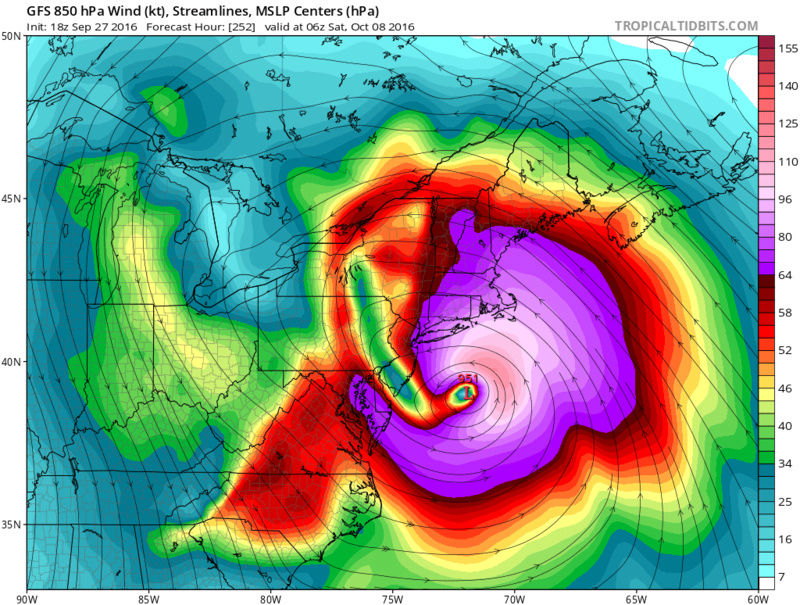 Okay last post, it looks like it recurves west right over NYC into central NY, after that it comes back SE, thats a pretty out there run, also 10 days away, seems to moved back in time a bit, still in time frame of franks banner, well good to stay there for some time. 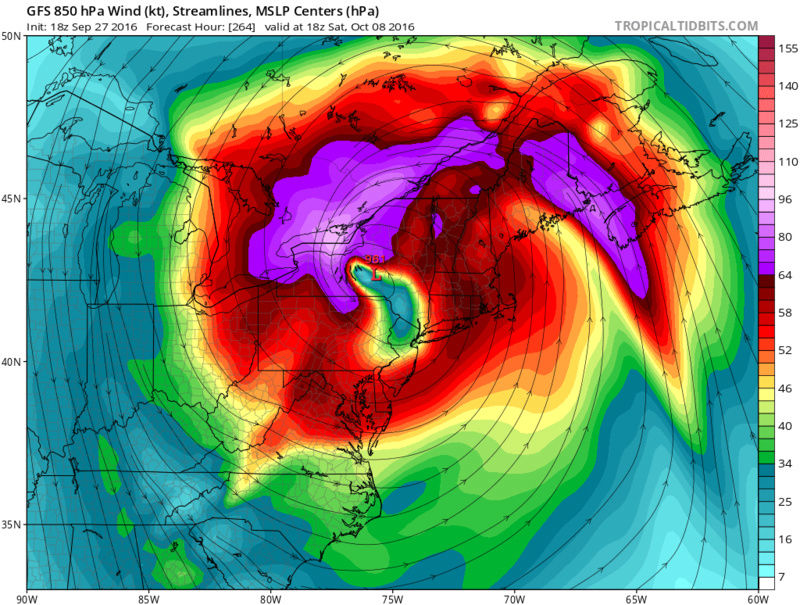 I am perfectly calm, just to see this is crazy, i am aware possible but not likely. Get a run like this over the weekend then I will worry. Just out of curiosity, a storm and run like that worse, same impacts as sandy? And initial effects due to sheer size start about 228 hrs.

Thats all I was saying (Sometimes in typing its hard to tell a persons real emotions, i was just saying wow, not falling on the floor rolling over lol), it seems GFS is heading more west and Euro is coming bit more east except for the ensembles.  The middle ground spells disaster somewhere on EC IMO. Shoot at this intenisty unless OTS(which looks unlikely with no escape route on most of the recent runs in upper levels) it would crush entire coast.

Def not the first run either to make landfall up here, GFS has been pretty insistant on midatlantic north impact, wether it offshore or directly. Def concerning and I think we can already start taking this somewhat seriously, but cautiously until we have Mathew and a def COC and a cone.

lots of convection an has spin. it just amazes me its not there yet.