Normally - especially with winter storms - I like to give updates every other day so everyone is up to speed with the latest information. To be truthful, the spread on guidance with Hurricane Matthew is one the of the most bizarre things I have ever seen. For instance, the 12z EURO run this afternoon took Matthew into Florida then LOOPED him back into Florida into the Gulf of Mexico. The National Hurricane Centers' cone takes Matthew all the way up the coast to the benchmark. It goes to show even the professional's are struggling with Matthew.

One thing is for certain, he is an impressive major hurricane who will cause destruction for whoever is in his path. 940mb storm with gusts excess of 150 mph? Yea...no.

Latest recon had Matthew around 949 mb. He "weakened" after running into Haiti's massive mountain ranges. He is now clipping eastern Cuba before heading back out over water where he's expected to stay strong, possibly deepening BELOW 940mb as he churns over the Bahamas. The Bahamas are in for a very very tough time. After that, I think Florida is next in line but models differ on whether he makes landfall on Florida. Right now, I think he DOES north and east of Miami. Check out the GFDL. This would destroy southern Florida!!

At this time, and a lot can change given the complexity of this forecast, I think we'll stay clear of Hurricane Matthew. I think he will take a track into Florida and either die himself out over the state, or track toward the Carolina's then head out to sea from there. 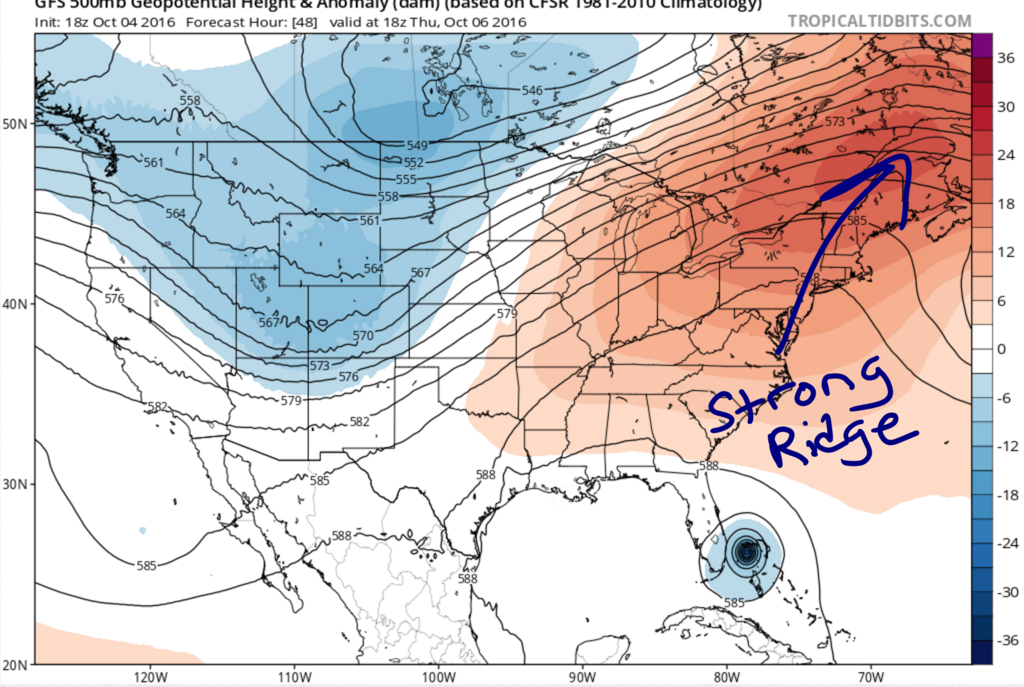 Here is the GFS. This model before today - among others - insisted Matthew will come up the coast bringing impacts from Florida to New England. Latest GFS runs are consistent with the EURO with Matthew going out to sea after effecting North Carolina (EURO does not get into Carolina's anymore as mentioned). There are 2 main problems I see if you're looking for this storm to come up the coast:

1. The WAR (West Atlantic Ridge) is too strong. See image below:

The trough out west has trended stronger in the last 48 hours, indicative by the blue shading. In turns, this pumps the ridge more over the east coast as it enhances the southerly flow.

The stronger ridge keeps Matthew further south. Earlier, some models believed the weaker ridge allowed Matthew to gain latitude instead of making landfall in Florida. Since he was able to get pretty far north, a trough to the west was able to catch him and reel him into the coast.

2. The trough is too progressive 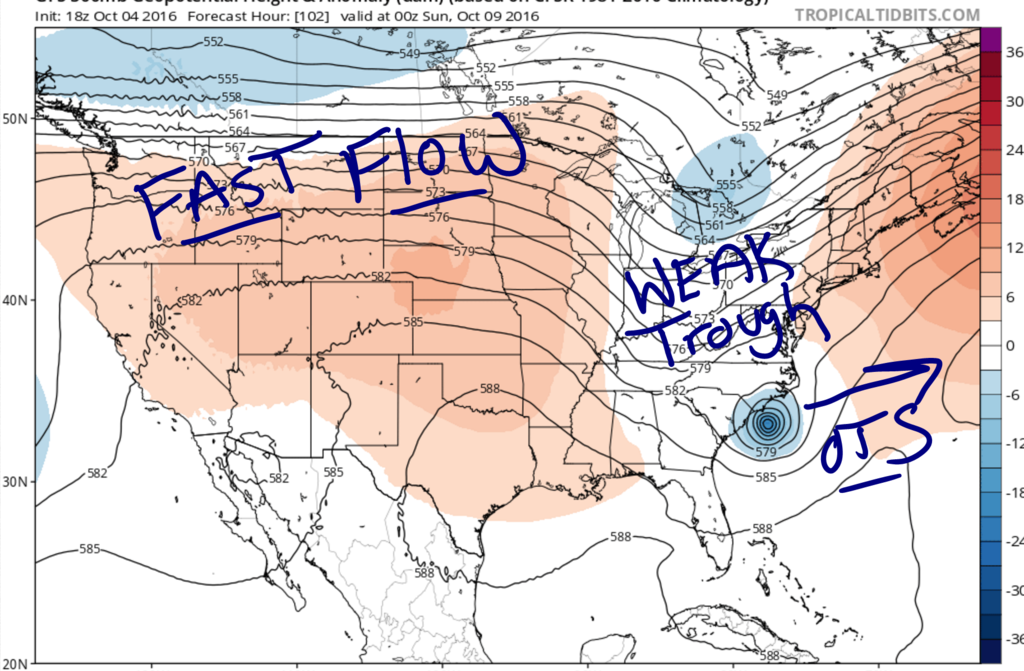 The EURO is the one model that keeps this trough weak and progressive. The GFS, shown above, tries to dig the trough into the east coast which is why Matthew is able to get up to North Carolina. Earlier in the weak, when the WAR was weaker and the trough was stronger, Matthew was tracking into our area and New England. This no longer seems to be the case. The trough will stay weak and the ridge will be strong as evidenced above. Further, the fast flow over the NPAC is preventing a +PNA ridge from forming. 200 mb shows a powerful jet streak slamming into the west coast. Even though there will be a stout -EPO ridge, there is 500 mb energy and a strong jet streak crashing into the west coast muting the western ridge. This is another reason why I feel the trough will remain as progressive as the EURO suggests. A favorable Pacific is critical if you're looking for a storm coming up the coast. We do not see that. 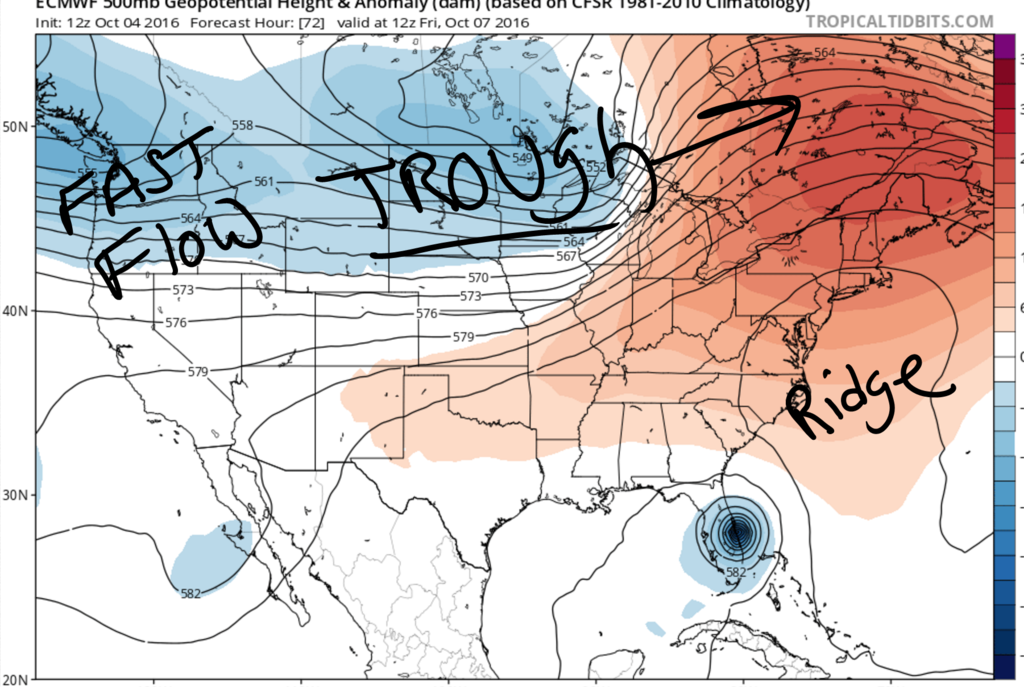 Here is the EURO showing what I just explained. Fast flow, weak / progressive trough, storm track further south due to strong WAR. I'll give the EURO credit in that its nailed the timing of this storm and the trough. I do not recall the EURO every being impressive with this trough. I do not credit the EURO with overall track though, because the GFS and other guidance were first to track Matthew into Florida or even near the coast. EURO was in the Bahamas then out to sea for a period of time. 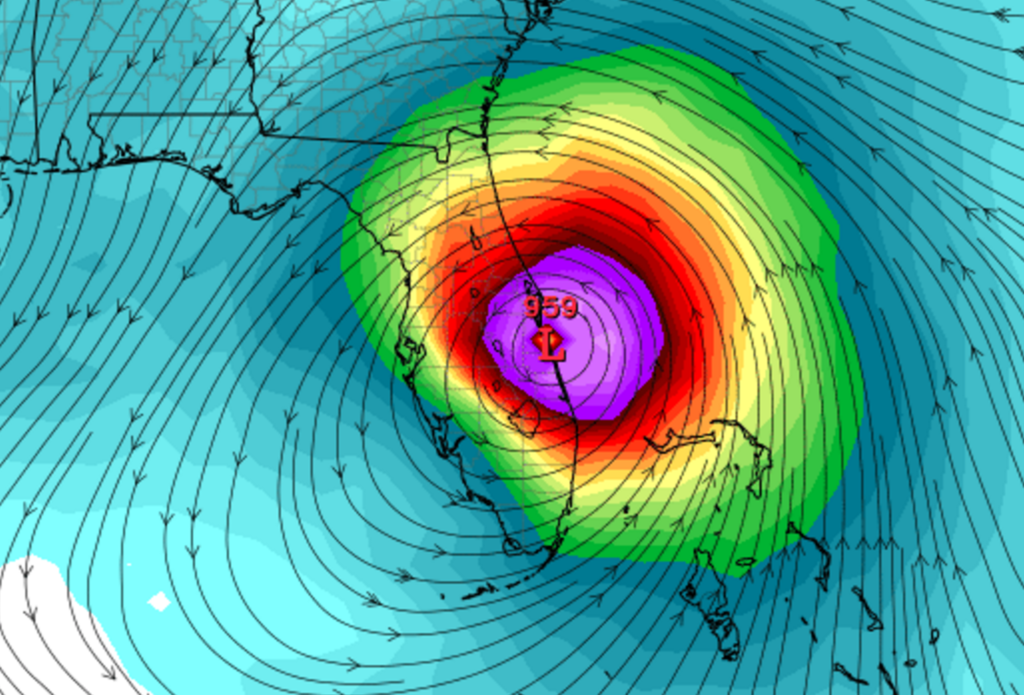 The EURO makes landfall north of Palm Beach. I think anywhere from there to Miami will ultimately be landfall.

Another possible path is for Matthew is for him to get close to Florida, but turn north and make landfall in either SC or NC. I am not discounting this track yet. The GFS is still hanging onto this idea. Check out these 925mb winds in SC per GFS. 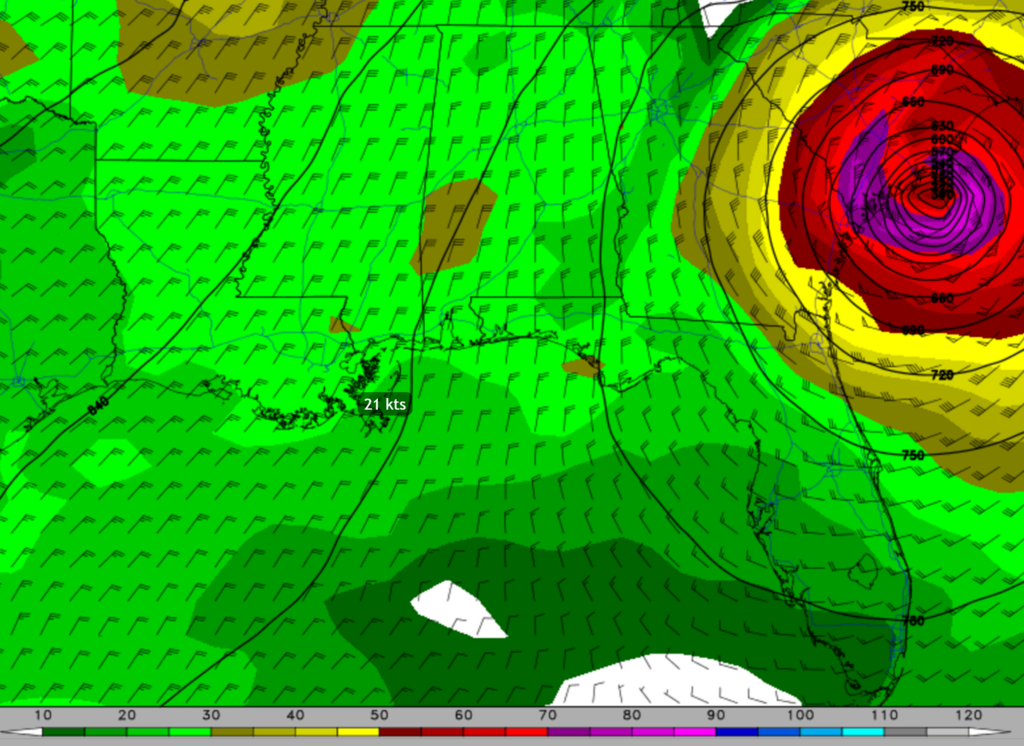 If I lived anywhere from FL to NC I would begin preparations, especially in Florida. I think NC has a chance of missing this storm too because Matthew may not "feel" the trough at all. It is possible the trough does not dig at all, as EURO suggests, and Matthew gets left with no steering pattern in the atmosphere to take him north. Considering his slow speed, and the trough's tendency to move quickly due to the fast flow, I can totally buy the last EURO run with a meandering Hurricane over Florida. Hopefully not since that could be pretty bad for FL, but not out of the question.

While I think Matthew will not make it into our area, I guess you can't totally discount the possibility. The NHC still shows a track off our coast and let's not forget we still have 4-5 days worth of model runs. With how these models have performed, new solutions after another, you can't completely rule Matthew out of coming up the east coast just yet. If things change and Matthew begins to look like a threat again in the northeast, I will be sure to let everyone know!

Thank you Frank..I am grateful to you for taking the time to explain to us...I am sorry for all of those who are disappointed. Watching a storm form is amazing .I love the thrilling ride of staying up way way way  past my bed time waiting for the next model run, with my pad under the covers not to wake my husband...watching the models being posted and all the debates and analysis between the great minds that are on this board! I love learning about weather from all of you.  I know with weather things are not set in stone!!..but I am relieved...that the threat against us is not great any longer, and worried for those in the south who do not yet know their fate, and lastly for those on the islands that are currently being hit by Matthew....I pray that not too many lives were lost.  ..my days of being in my 20's being up all night and running all day are over...LOL   I am going to bed!!