Still long ways off. If a front comes through quicker than expected than naturally cold air will filter behind and we'll be in the 30's.

Even upper 40's is 8-12 degrees above normal for the city and N & W suburbs, I'll take it over last year but it's still a scroo job.

Maybe for NJ suburbs but that's about normal technically for the city. The city's average isn't 35 or 30 yet for this time.

We were talking about Christmas Day.

The average temperature in Central Park on Christmas day is a high of 40 and a low of 29. For Orange County it's 36 and 18 so I stick with what I said, upper 40's would be 8-12 degrees above normal for Christmas Day for NYC and N & W suburbs.

NYC is the aberration not the normal in our area.

PAC going to be an ally as we head into this warm period - need teh PAC and it may come to the help of us easterners!!

amugs wrote:PAC going to be an ally as we head into this warm period - need teh PAC and it may come to the help of us easterners!!

Mugs the last few runs of the GFS ensembles for the long range looks like the positive EPO Nao doesn't last long as its trying to build the ridge again in Alaska. To me it looks like a relaxation and then a reload and by that time we'll be in Prime climo. Besides this weekend storm we have a shot next week with more snow esp early on as we will have another Arctic air mass In-Place Monday Tuesday Wednesday as you have pointed out in the banter thread. I still see KNYC -2 for the month with near normal snowfall although the snowfall that we get will be more of a mixed events

^^ Al - I see this as a 2013-14 set up where we had a warm up before the hammer drops again IMO . Negative EPO will build - I am not 100% on the PNA going Positive but hopefully neutral overall - looks like a Scandinavian Ridge will build which will help with the flow just like 2013-14 and may just allow for a wave 2 attack on the STRAT. We may be plus 3 for the week before we flip back which may be the looks like the last week of December. BTW PAC map I posted showing teh wavy rollercoaster troughs and ridges are going to slow the flow down as well. The ridge trying regain itself in the WPO adn EPO regions are a good sign in the LR 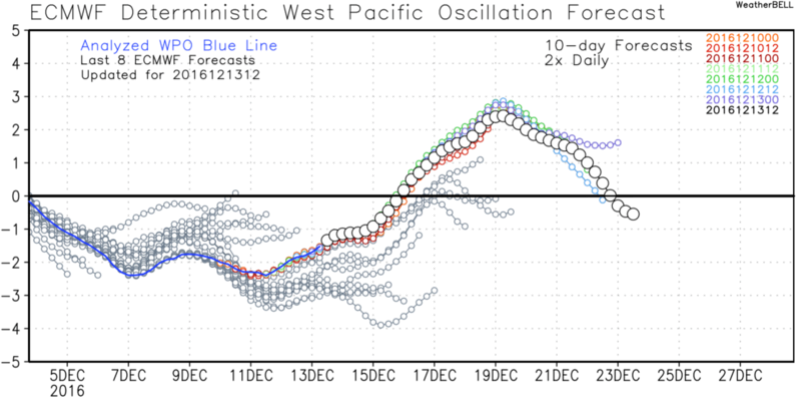 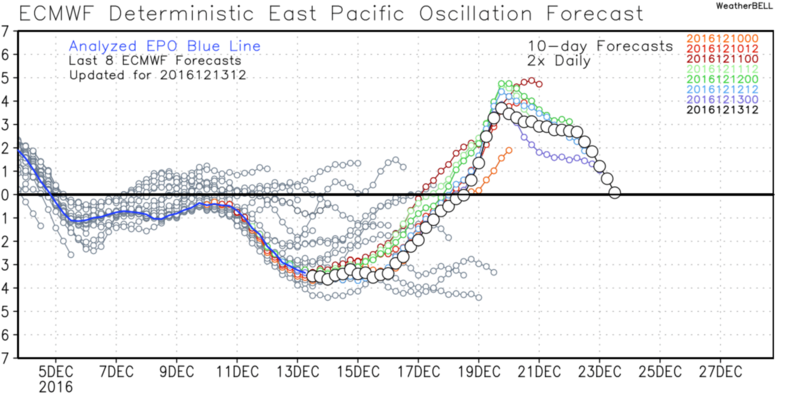 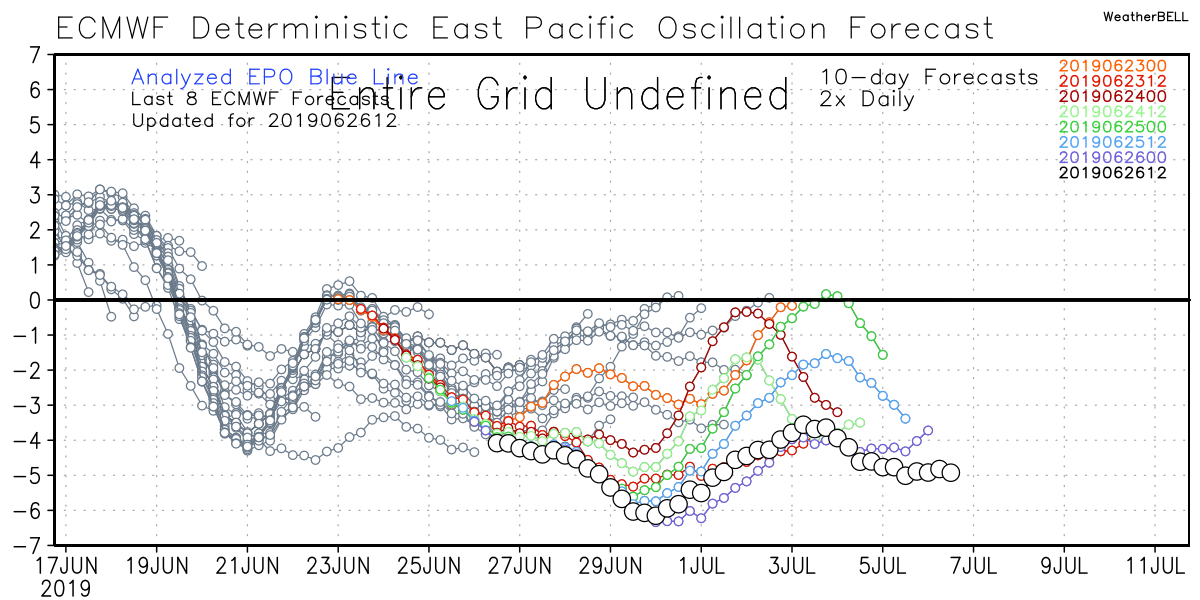 amugs wrote:PAC going to be an ally as we head into this warm period - need teh PAC and it may come to the help of us easterners!!

Mugs the last few runs of the GFS ensembles for the long range looks like the positive EPO Nao doesn't last long as its trying to build the ridge again in Alaska. To me it looks like a relaxation and then a reload and by that time we'll be in Prime climo. Besides this weekend storm we have a shot next week with more snow esp early on as we will have another Arctic air mass In-Place Monday Tuesday Wednesday as you have pointed out in the banter thread. I still see KNYC -2 for the month with near normal snowfall although the snowfall that we get will be more of a mixed events

Your going against 17 straight months of above normal Al, I hope you're right.

Cp 2 artics blasts one tom. and one monday although not as brutal. We will be minus 3 by the 20th. That means we have to average +6 the last 11 days. While there will days of + 6 there also be a few below normal days in there so a negative December looks extremely likely at the moment.

Frank_Wx wrote:Mugsy - I am talking about the Saturday storm in the December thread since technically it's not long range anymore. I will start a thread on it later. Working late today.

The more I look at the medium to long range the less I'm inclined to believe this month will finish much above normal. Instead, I think December will end at normal (-1 to +1). I did not forecast in my winter outlook December to finish above normal, in fact I said this will be the coldest month of the winter, but sentiment around the weather community seems to be its been a warm month when it really hasn't been. Extreme cold the next few days followed by some cutters with more cold filtering behind will likely juggle temp departures from normal between +3 to -2 (you get the gist) and when all is said and done the month will finish around normal in my opinion. 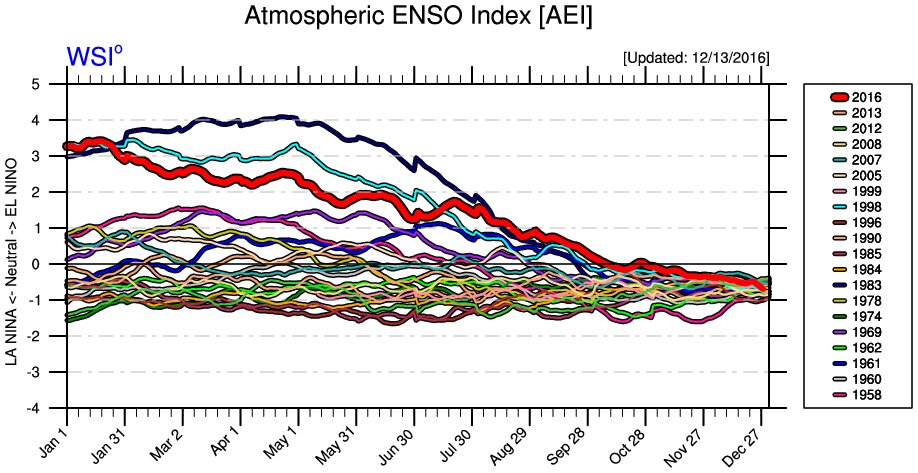 I saw this graphic from Ventrice and found it interesting. His atmospheric ENSO index, which is a tool he has to show which ENSO state our atmosphere is responding to, says our atmosphere did not descend to La Nina status until the Halloween time frame. Considering negative ONI values have persisted since the summer, one would think our atmosphere entered La Nina sometime in late fall. I'm not sure how accurate this tool is, but it goes to show the toll the El Nino of last winter took on our atmosphere. 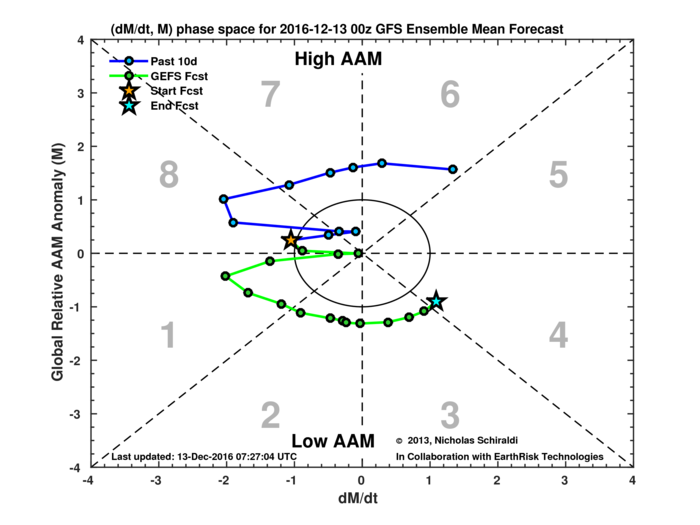 Some folks were talking about tropical forcing and how that could lend to colder than normal weather returning to the Northeast around New Years or early January. While I'm not discounting it, it's important to note that models show tropical forcing in the long range and it's no guarantee it comes to fruition. Further, upward motion is non-existent over the Dateline (typical of La Nina years anyway) and AAM is not really showing positive but more neutral conditions in the long range. It would still have an impact on our pattern though, so we'll see how true this is. 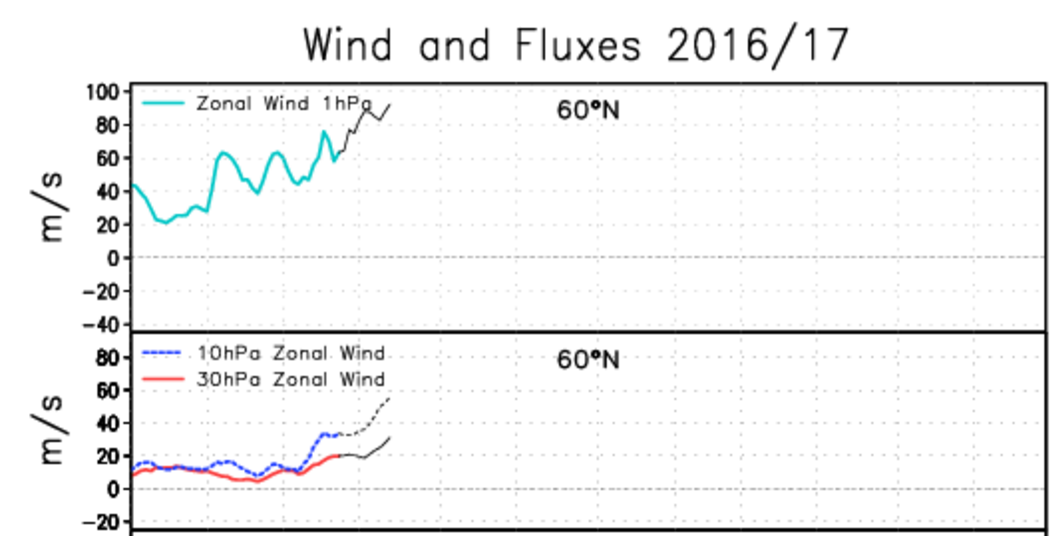 Lastly, 1hPa, 10hPa, and 30hPa Stratospheric mean zonal winds continue to rise, or show intense westerly winds. Without a wave breaking pattern in sight to transport warmth into the Stratosphere, the PV will continue to intensify in the coming days and weeks. What's interesting is some knowledgeable people in this field feel it's not bad news this is happening to the Strat PV. Their thoughts are if the PV were to stay weaker than normal through December, it would not produce a huge feedback (or SSWE) impressive enough to impact our AO. As long as we're able to see mean zonal winds reverse in time (by Week 2 or Week 3 of January) then the SSWE could be more impressive with a PV in a strong state as opposed to one in a weak state.

this is not a warm look on the eps as we head towards the holiday season.

notice how ridging is trying to build back in the wpo and epo regions. yes not cold but def not a torch. we can work with a +1-2 as we head into peak cold climo. to me it's a relaxation and then reload. we shall see.

White Xmass GFS says we have a shot

What does that mean

frank 638 wrote:What does that mean

Thank god it has struggled this winter

Thank god it has struggled this winter

The North Jersey Weather Observers association had a meeting and Jim Witt was our guest speaker and talked about his winter forecast - amazing the amount of information that he compiles (went back to 1876 for NYC in analogs!!!) to come up with his forecast simple as this for NYC: Keep in mind he made this forecast in September but we cancelled a meeting for his November presentation:

DEC
Normal for temps over all (+.5 ) and Slightly BN for snow fall but AN for Precip
NW of NYC BN temps and AN Snowfall

JAN
AN by about +1 for temps and BN for snowfall by about 2.5" and Slightly BN for precip

Ready for this bomb
FEB
WAYYYYYYYY BN by 8*!!!!!!!!!!!! and WAYYYYYY AN for SNOW by 7"
Why? He said that terrestrial alignment of the Earth and Uranus at a sextant angle of 60* means we will go into teh freezer for the first three weeks of Feb. - It may extend into late Jan. He said last time this occurred 1978 and I believe 2003.

Dates on calendar to note
12- 18-20 strong cold front
Jan 22-26 - intense storminess due to Moon, Sun, Earth and Mercury alignment - lets get Saturn in there and we can have a bomb!!

The pattern is still on track to turn milder after we're out of this cold stretch early next week. EPO, AO, and NAO will be positive and the PNA predominately negative. It's not surprising since I thought the 12th to 18th was a transient period of colder than normal weather, but it is frustrating that it's changing over Christmas week. Unfortunately this could last well into January. New JMA seasonal flipped to much above normal temps in January. 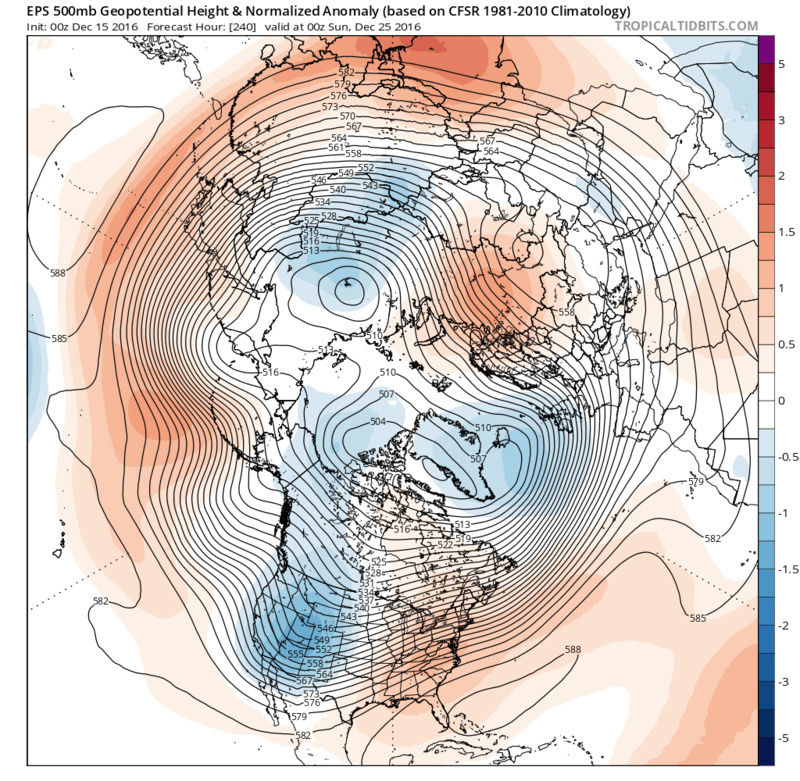 This graphic suggests WAF may be on the increase around New Years. If this is true, it may set up a precursor pattern in the Troposphere that leads to a possible SSWE sometime the first half of January. Long way to go, but at least it's cool to see. 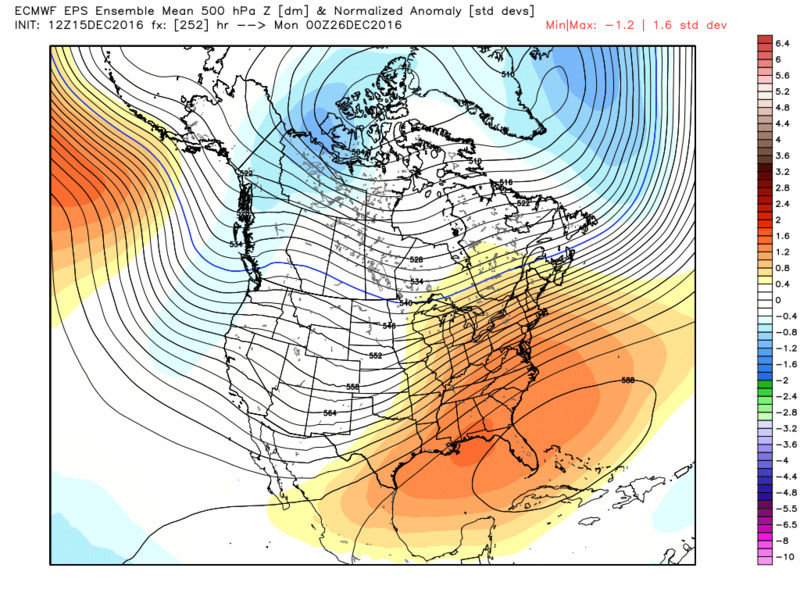