I know it's still October but over a couple of days, I went to look up some information regarding December temperatures in NYC.  Looking at the Local Climatological Data section on NOAA's website. This includes daily weather information from Central Park,  displayed in monthly or annual statements, the earliest being in January 1882, 13 years after CPK began keeping weather records.  There are plenty of gaps, unfortunately, especially toward the beginning.  However, if I am not mistaken, this site contain every monthly summary since June 1950, several months before docstox12 was born.  Thinking at how warm our Decembers have been, though none as insultingly warm as December 2015, I put some information in.  Since I am unsure how to digitally place the information into Excel (though I would love to know how (heck maybe Frank or Ryan would know how

I mentally went through the information and summarized it on Excel as shown below.  Looking at every December monthly summary since 1950, I counted in my head the number of days with lows below 20 degrees, the number of days below 32, and the highest low temperature.  It explicitly states the lowest temperature of the month and while it does display days with lows at or below 32, I wanted to take a look at below 32 exclusively, for the sub-20 and sub-32 amounts, I then calculated the percentage of the 31 days of December that were below the amount. 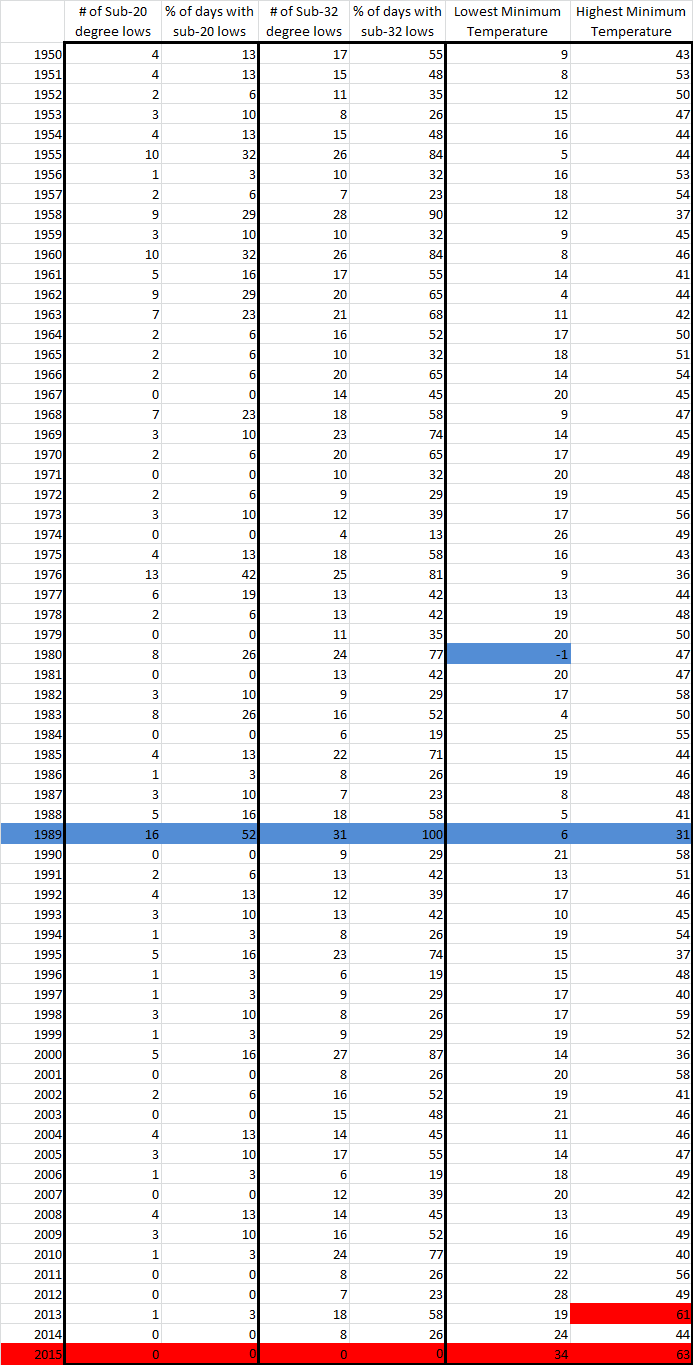 Now take a look at the cells I highlight:

The lowest temperature in December 1980 was -1 (on Christmas morning in fact!)  I also have the entire 1989 column highlighted in blue as it was the third coldest December on record and the coldest in the 1950-2015 range.  Notice how the temperature went below freezing every day that month, making for a clean sweep if you love cold weather in December (though not a great month for snow as only 1.4" fell).

If I am not mistaken, 2013 marked the first time on record that Central Park had a LOW temperature at or above 60 degrees in December.  On 12/22/13, it was 61 for a low (and since it was 71 for a high, went into the books as a COOLING degree day (for those of you who don't know, cooling degree days are days where the mean temperature exceeds 65, in contrast to heating degree days where the mean temperature is below 65).  I also highlighted the entire 2015 row.  Even though no explanation is needed as to why I highlighted it, it went the entire month without freezing AND the low temperature on Christmas Eve was 63 (and with the high being 72, it had a COOLING degrees index of 3!).  I remember going to church for Christmas Eve services and not only were people wearing polo shirts, the fans were on, something I thought I would never experience at church on Christmas Eve in New York City.  Surreal for sure.

Anyway, here is the link to access the information for those of you who don't know:

For Central Park information go to New York -> NEW YORK [NYC] 1882-01 - 2016-09 (94728), then feel free to browse them yourself.  Feel free to correct me if you notice I put in wrong data.  Of course, you can also take different routes and explore other weather data from other sites across the country.

I just hope we have a cold/snowy December, even though I do not see it happening.  While I do not see it being as warm as last December (which had a mean temperature of 50.8, 6.7 degrees above the old record of 44.1 in 2001, I don't think it will be pretty.  My question to Frank is this:  What will you do if December 2016 ended up being warmer than December 2015 in Central Park?