We're looking at another winter storm where snow and ice is expected to change to rain during the day Saturday. The Pacific short wave is modeled to be very strong, and High Pressure is expected to slide off our coast, and those are the main reasons why mild air will infiltrate the region. It also does not help matters that there is no high latitude blocking. 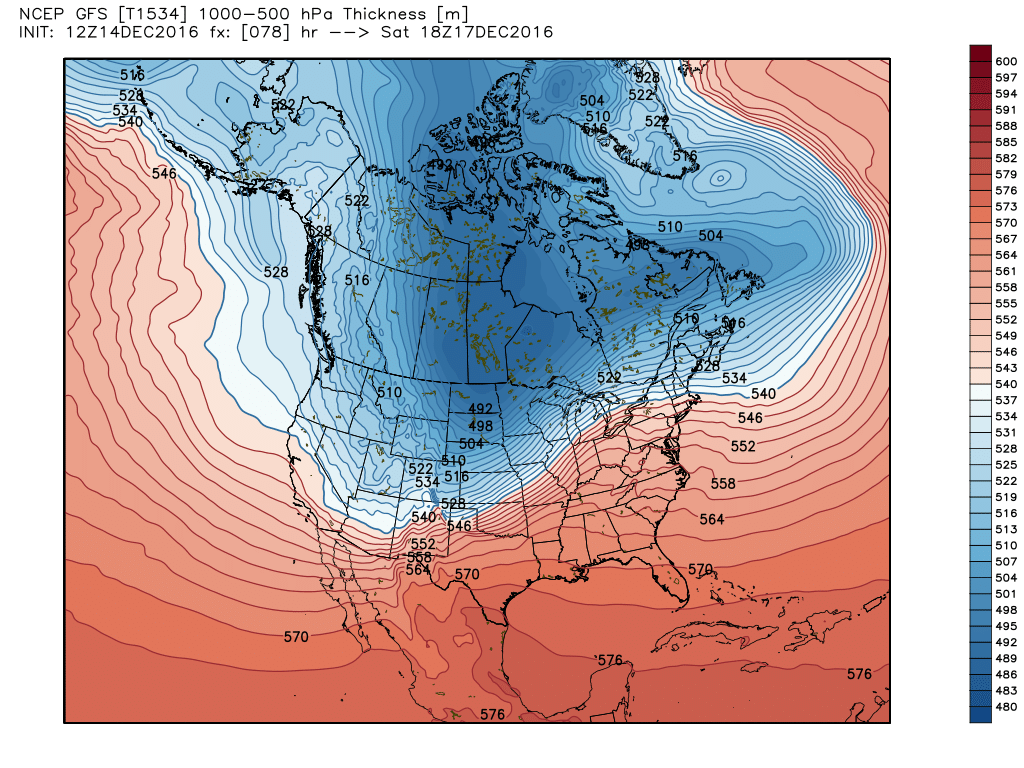 Most of the area should be snowing between 3am and 9am Saturday. The above map nicely depicts how thickness will rise by the time we get into the late morning and early afternoon on Saturday for the reasons mentioned above. 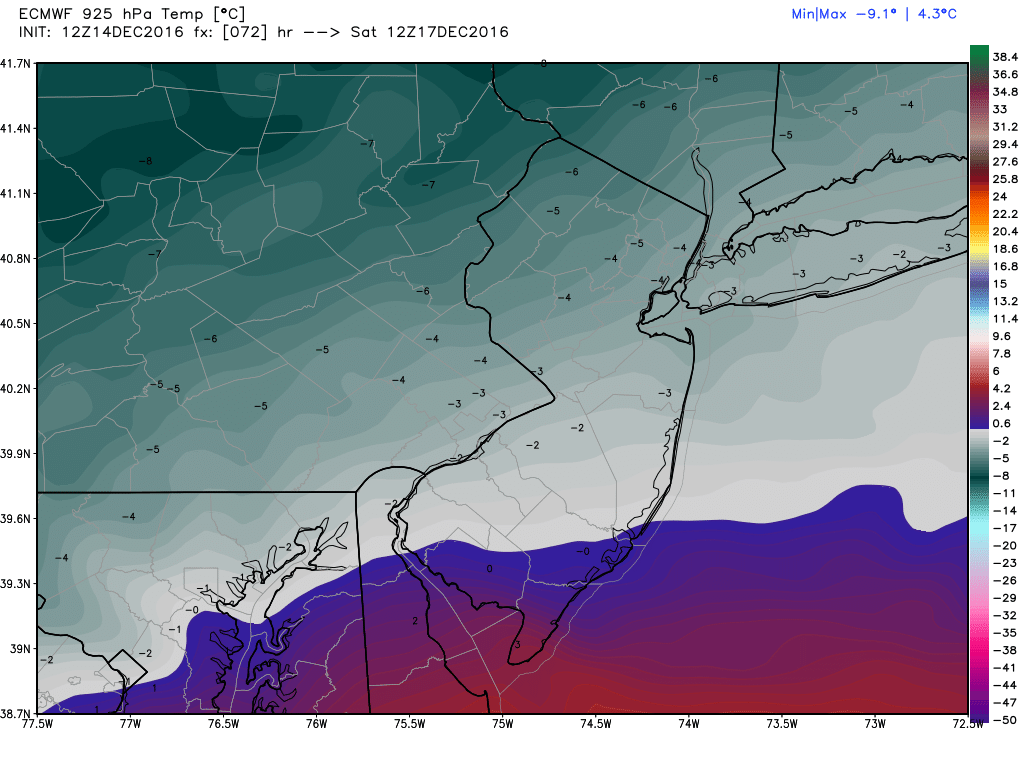 7am Saturday morning, 925mb temps are expected to be below freezing. 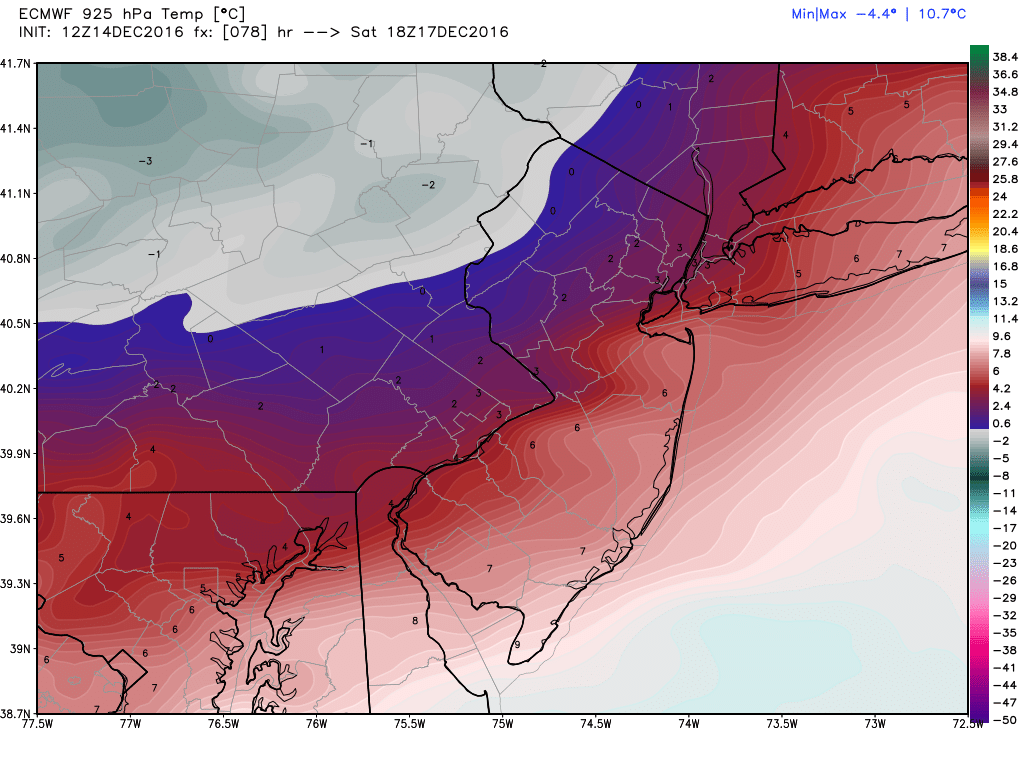 By 1pm, they're expected to be above freezing for much of the area. The immediate coast is likely to changeover to rain then the "mix" line will gradually push inland from there. As the High Pressure moves off our coast, and the surface low pressure system cuts inland, winds will turn from the south and rush mild air into the area. 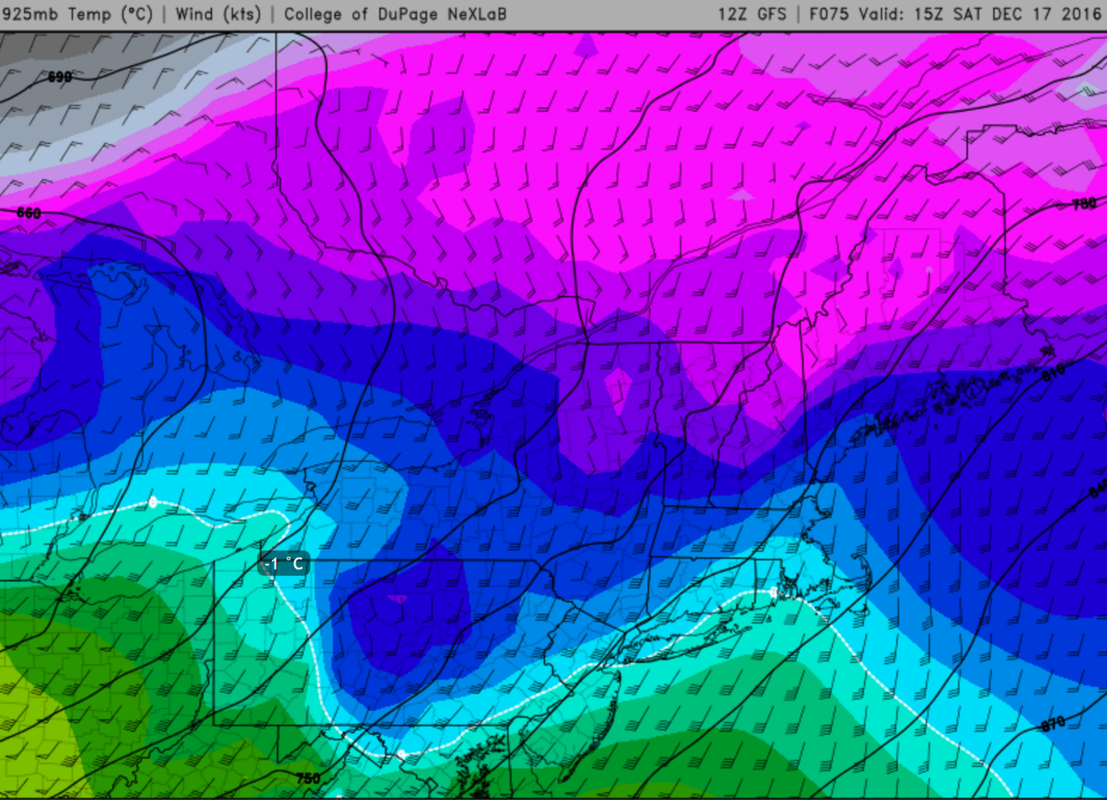 Here is a look at 925mb temps valid 10am by the GFS. NYC is right on the line, but this graphic brings home the point that the immediate coast will changeover before anyone else. They're most susceptible to the changing winds before anyone else. 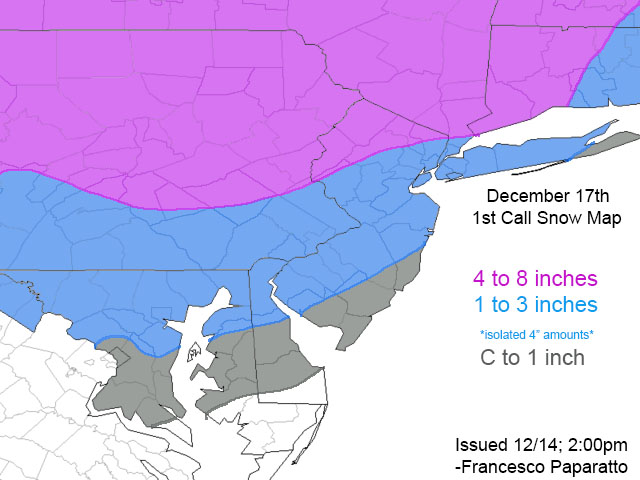 1st call snow map and storm update is up

haha your line between 1-3 and 4-8 goes right over mugsy and me! Bring it down a tad!

The weekend storm looks like 1-3 inches for the coast and more to the north and west as of right now. The coast could see higher amounts if the precip comes in earlier than modeled or the cold air hangs out longer.

Dunnzoo wrote:haha your line between 1-3 and 4-8 goes right over mugsy and me! Bring it down a tad!

Snow88 wrote: The weekend storm looks like 1-3 inches for the coast and more to the north and west as of right now. The coast could see higher amounts if the precip comes in earlier than modeled or the cold air hangs out longer.

Same here I would take 3 inches of snow .anyway frank I am hearing from Joe cioffi that on Sunday afternoon when the storm ends the rain might change back to snow

Nam develops a new low on the coast

I didn't see the other models do that

12k nam crush job. 4" line just north of city and up to 8 inches for the north and west. Precip shuts off by noon Inland areas not going to see a flip to rain maybe some drizzle or freezing drizzle at the end

It seems that it's possible that this may trend colder

algae888 wrote:12k nam crush job. 4" line just north of city and up to 8 inches for the north and west. Precip shuts off by noon Inland areas not going to see a flip to rain maybe some drizzle or freezing drizzle at the end

GFS is similiar to 12z

Rain could change back to snow on Sunday. That is something I am still uncertain about. Back-end snow does not work out very well for this area. I would not expect much from it.

Frank_Wx wrote:Rain could change back to snow on Sunday. That is something I am still uncertain about. Back-end snow does not work out very well for this area. I would not expect much from it.

So I'm going to highlight a few things here that could very well lead to high potential to bust high or low on snow totals before an inevitable changeover to rain occurs.

Typically the 850mb temps are what you look at to view where the rain snow line is.  South of the 0*C line at 850mb is typically rain and north of it is typically snow.  Of course there are other layers to look at, but again general rule; not Gospel.

Lets look at last nights 00z Euro 850mb maps starting with hr48 and ending with hr 66.  In less than 24hrs the freezing line retreats north by almost 600miles; the last 6hrs of which it retreats north an incredible distance of about 250miles!!! in 6HRS!! 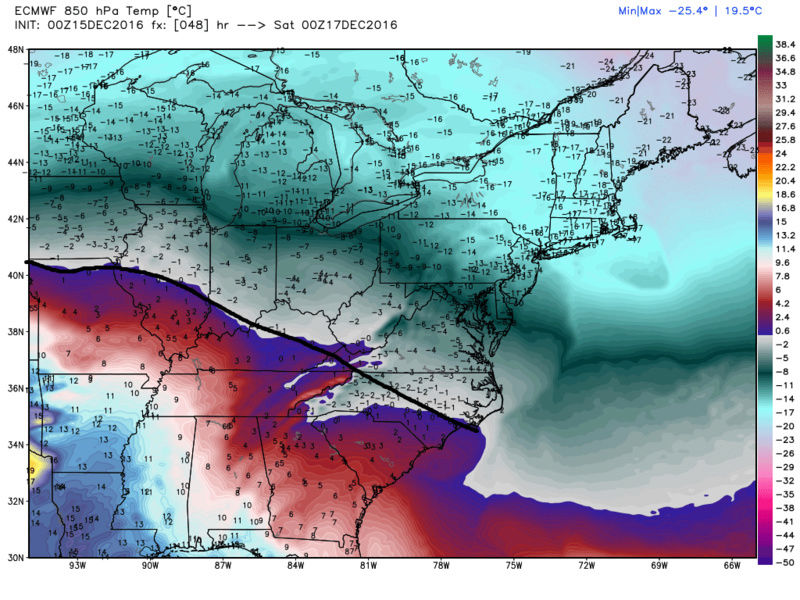 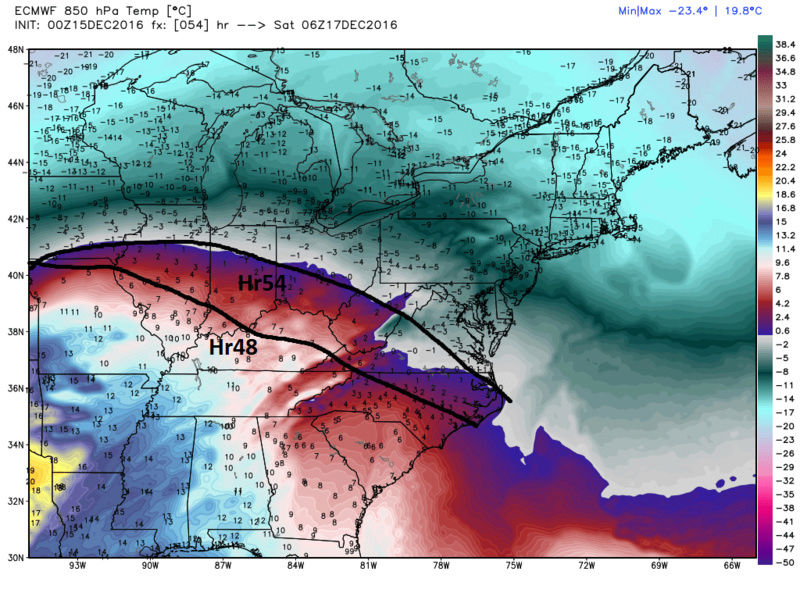 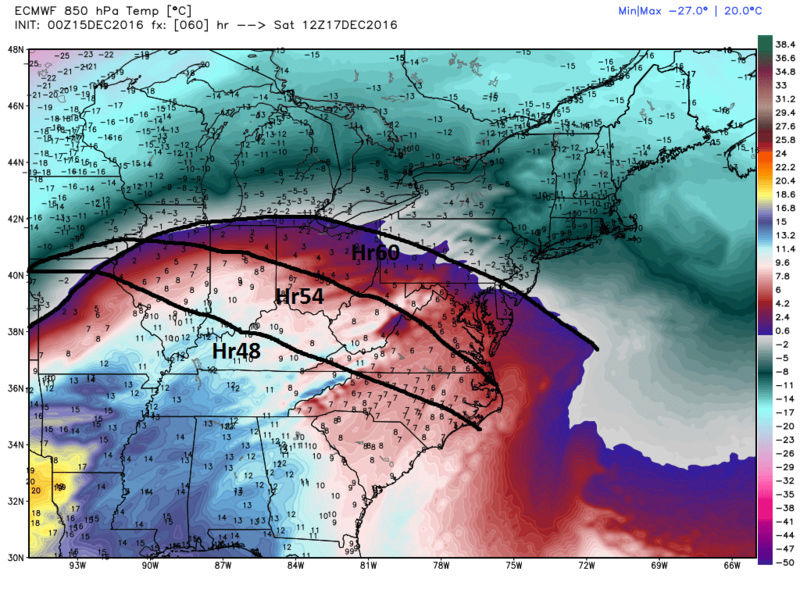 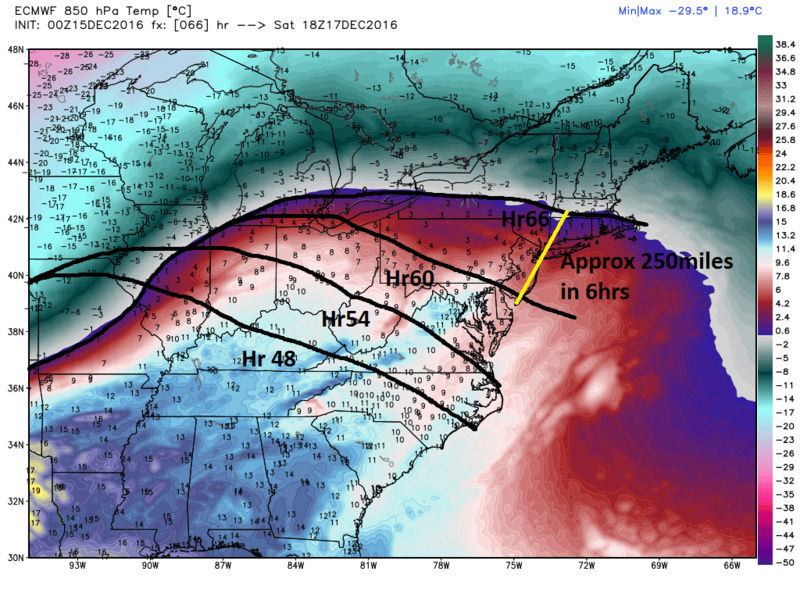 Now it has been my experience that modeling, esp the global models, tends to be to fast to move out a strong cold air mass in an over running event like this(warm air advects, or lifts up and over the cold air mass) because models cant handle the physics of the cold more dense air mass relative to the warm air mass and therefore is difficult for models to interpret.  But, even with that said it seems with the exception of subtle differences all of the global models have the 850mb freezing line jump this large distance in a really short period of time(6hrs).  Now because of the lower resolution of the global models it is really hard to see what happens within this 6hr window.  Now comparing the Euro to the GFS the euro does have better resolution relative to the GFS so it may have a better handle on what is to happen.

The timing of where the freezing line is in the lower levels of our atmosphere relative to where the precip is is critical.  Differences of a mere couple of hrs could end up being the difference  between an additional 1-3" vs less 1-3" in snow totals for many locations.  So again look at where the 0*C line is from hr 60 to hr 66 and look at the difference between the intensity of the precip between hr 60 and hr 66.   Remember in the image below by hr 66 on the euro the heaviest precip moves in but the 850mb freezing line is already in southern Mass.  If the cold air leaving is delayed by only a few hrs, or if the heaviest axis of precip moves in a few hrs earlier the differences in snow totals could be significant.  The reverse can be said; however, for lower totals as well if the warm air is faster moving in or the precip is slower. 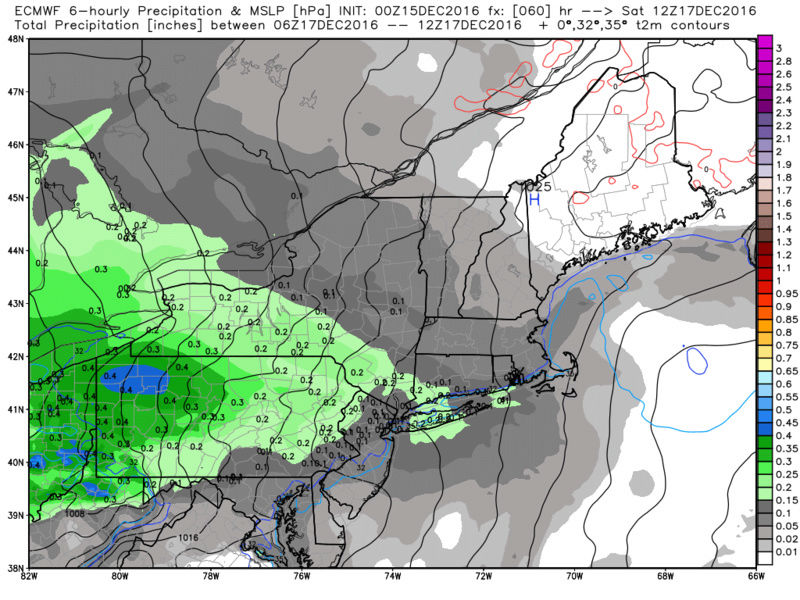 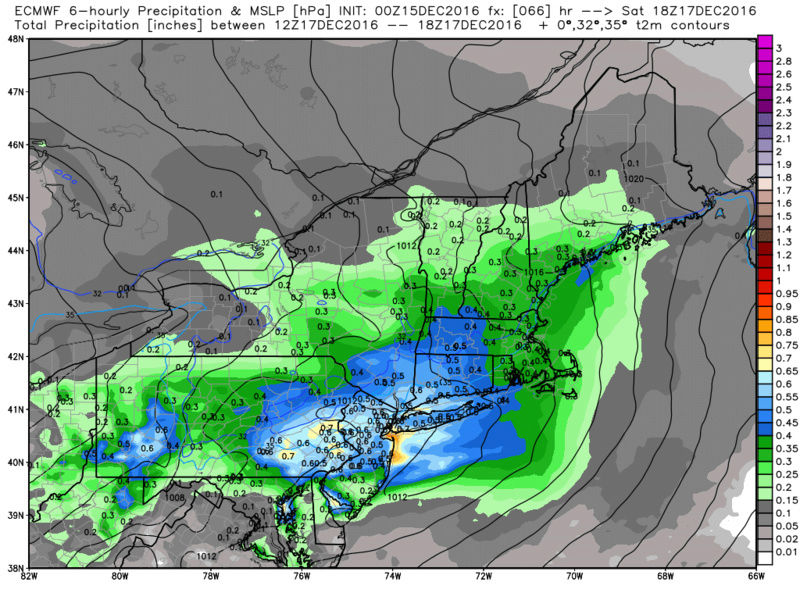 As of now the Euro def has higher snow totals area wide.  Here are the differences in snow maps between the two 00z runs from last night. 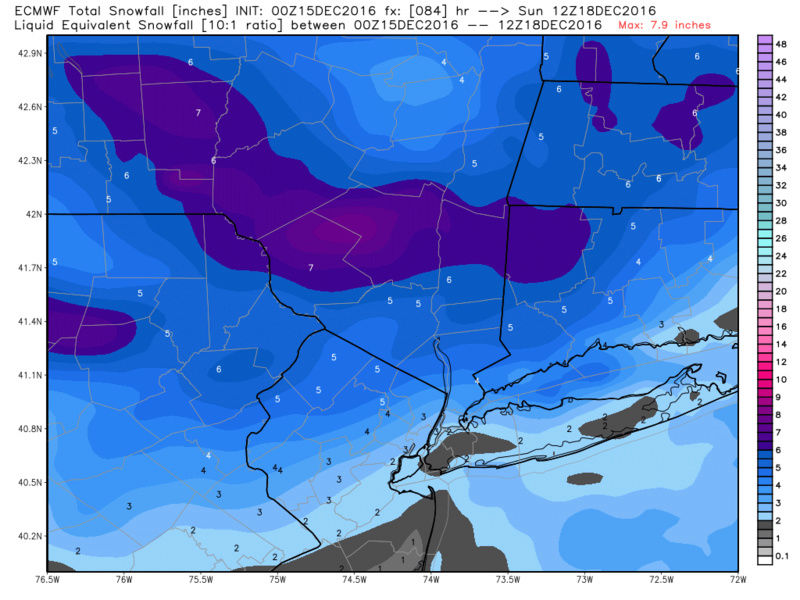 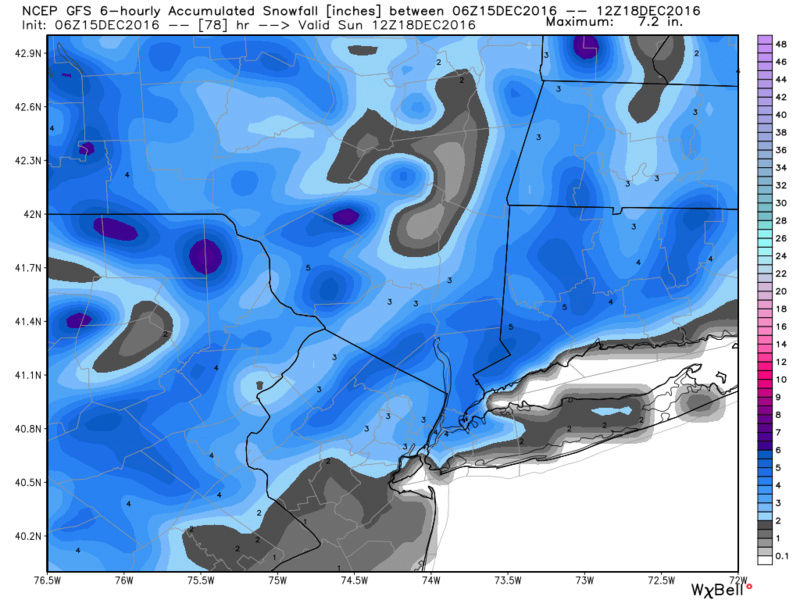 This Jman, is why the Hi-Res models will likely be better in tight with this sort of mesoscale set up, because they have better resolution; therefore should be able to pick up on what happens inside smaller time increments regarding the rapid temp changes and subtle diffferences of precip timing.  That said even the hi res models have had a diff time picking up on such rapid changes inthe past with these sorst of set ups, so there should be a high degree of uncertainty in this forecast and nowcasting will be important.

Now I do want to show a major large scale difference between the GFS and the Euro and why the GFS is a tad faster in pushing the cold out relative to the Euro and why its snow totals are less.  Here are the mean surface low pressure maps of north America.  I have highlighted the important features.  Again look at the primary low that is cutting north well to our west.  On avg about a 997mb LP system that is centered way west over Illinois at the time the precip moves in and that rapid 6hr surge of warm air occurs in the modeling.  With this alone there is no way the warm air wins like that; however notice the positioning of the HP off our coast.  The center of it is such that there is an additional S to SE flow off the warm atlantic in addition to the SWesterly flow via the cutting LP.  Notice however there are pretty big differences between the GFS and Euro regarding both HP strength, 1034mb GFS vs 1030-1031mb on the Euro.  Also look at the differences in the strength of the LP to the N of the HP.  Why is this impotant you ask?  Well if the GFS is correct with these two features, 1034mb HP and 959mb LP (a difference of 75mb) to its north then you have a much steeper pressure gradient relative to the Euro's 1031mb HP and 968mb LP (a difference of only 63mb) to the north.  This means the intensity of the southerly return flow into our area will likely be stronger if the GFS is right leading to a faster surge north to the lower level freezing line and a faster transition over to white to wet. 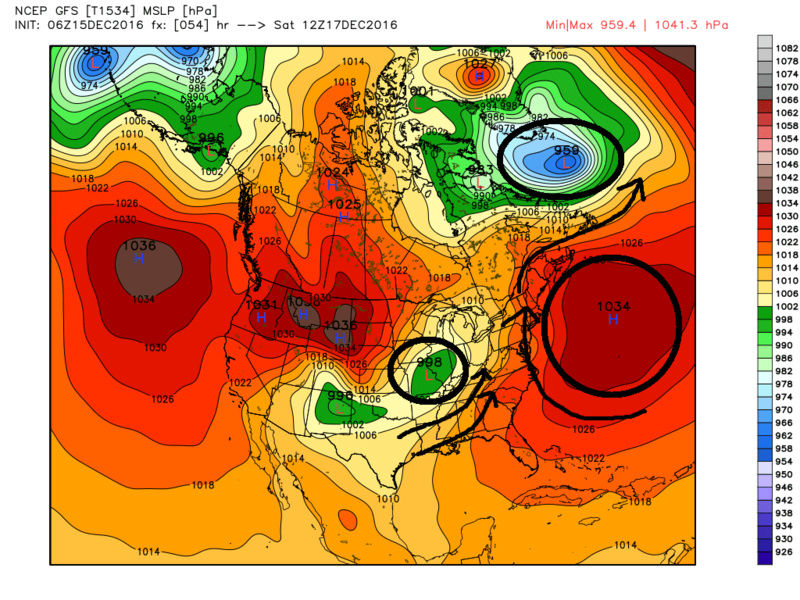 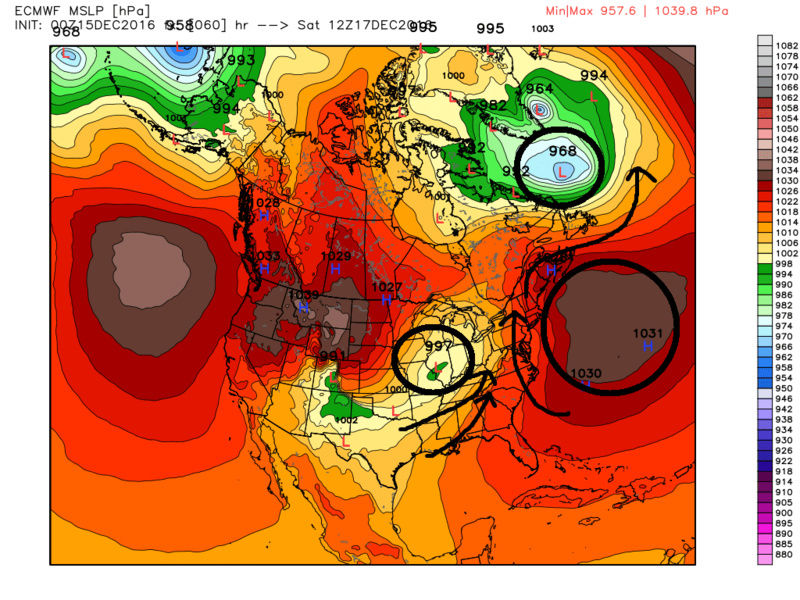 Because of the SW flow from cutting LP combined with the strong southerly return flow from of the HP positioning off the coast the rapid surge of warm air is likely semi accurate in the modeling.  However, I still believe that models are still pushing it out a tad too fast.  As we head into late Friday afternoon into the late eve we should be able to look at the actual observations, (ie: where is the lower level freezing line, how fast is it advancing north, how strong is the HP, LP, how expansive and how far east is the precip shield etc) to know if any surprises will occur.  So here is my snow map which is a blend of the GFS and Euro, but leans towards the euro side of things.  I do think there is a high potential to bust in either direction.  Gun to head I will say I'm leaning towards my map busting a tad low because I am banking on the cold air having a harder time moving out than is modeled, but only by a very slim margin. 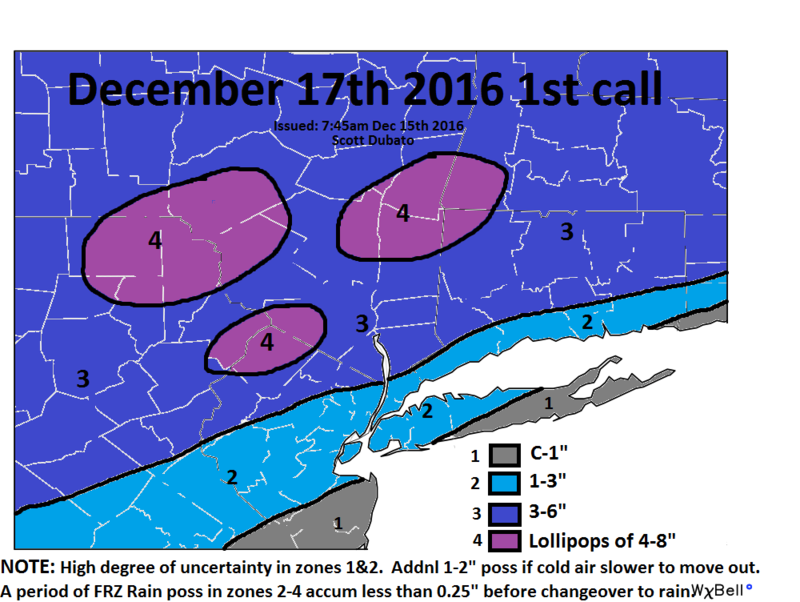 Excellent discussion, Scott! Frank, you too! I've been creeping for the last couple of days, but I am going to be putting a map together supplemented with a video later today haha finally have legitimate internet to work with again :p

Htrerat discussion Scott and excellent map - I have told all up here in NNJ that 3-6" is our range with Western Passaic, Morris, Sussex and Warren Counties seeing 4-8" - if cold air hang on which we have a deep dense layer of arctic air that is hard to erode hangs on which I am and have been saying will do (leaning with you here) then teh snow totals will be at the higher end. Elevations will once again do best

Snow squalls will move across portions of the Northeast NJ, New
York City, and Long Island through 1030am.

While these snow squalls will be hit and miss and brief. Visibility
may suddenly drop to near zero in localized squalls, creating
whiteout conditions and icy roads. Also, minor accumulations will
be possible.

Snow squalls will move across portions of the Northeast NJ, New
York City, and Long Island through 1030am.

While these snow squalls will be hit and miss and brief.  Visibility
may suddenly drop to near zero in localized squalls, creating
whiteout conditions and icy roads. Also, minor accumulations will
be possible. 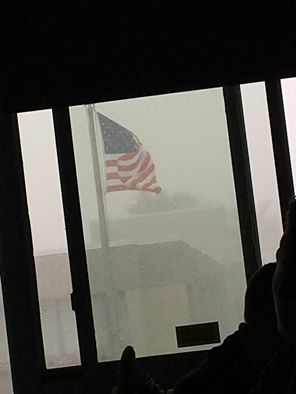 My sister just sent me this from home. Nasty squall down there