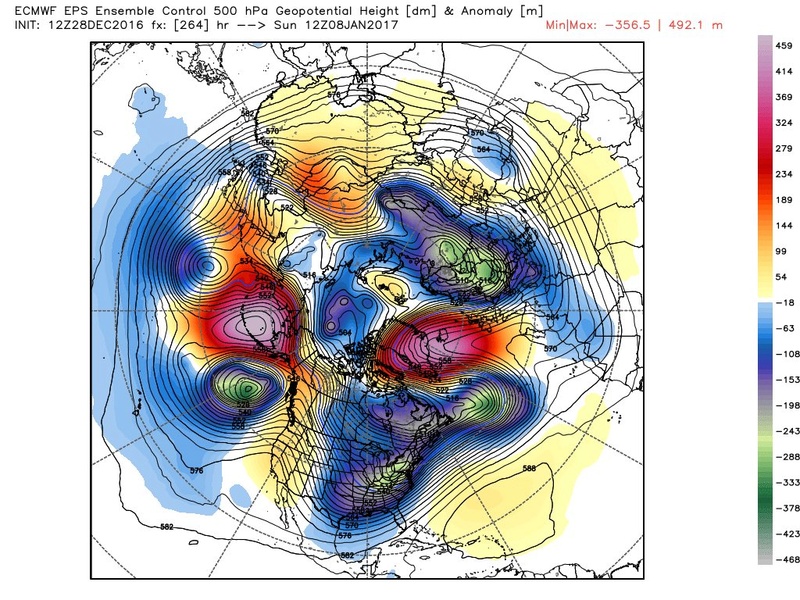 @Frank_Wx wrote:Mugs - that is the best look I've seen yet. If this comes anywhere close to fruition we'll be tracking a Godzilla sooner than later. As a reminder, time frame of interest is 6th to 12th, particularly 9th-11th.

GFS is already showing something of interest around Jan 8 in fact. At least the last run I looked at, which coincides with this set-up. 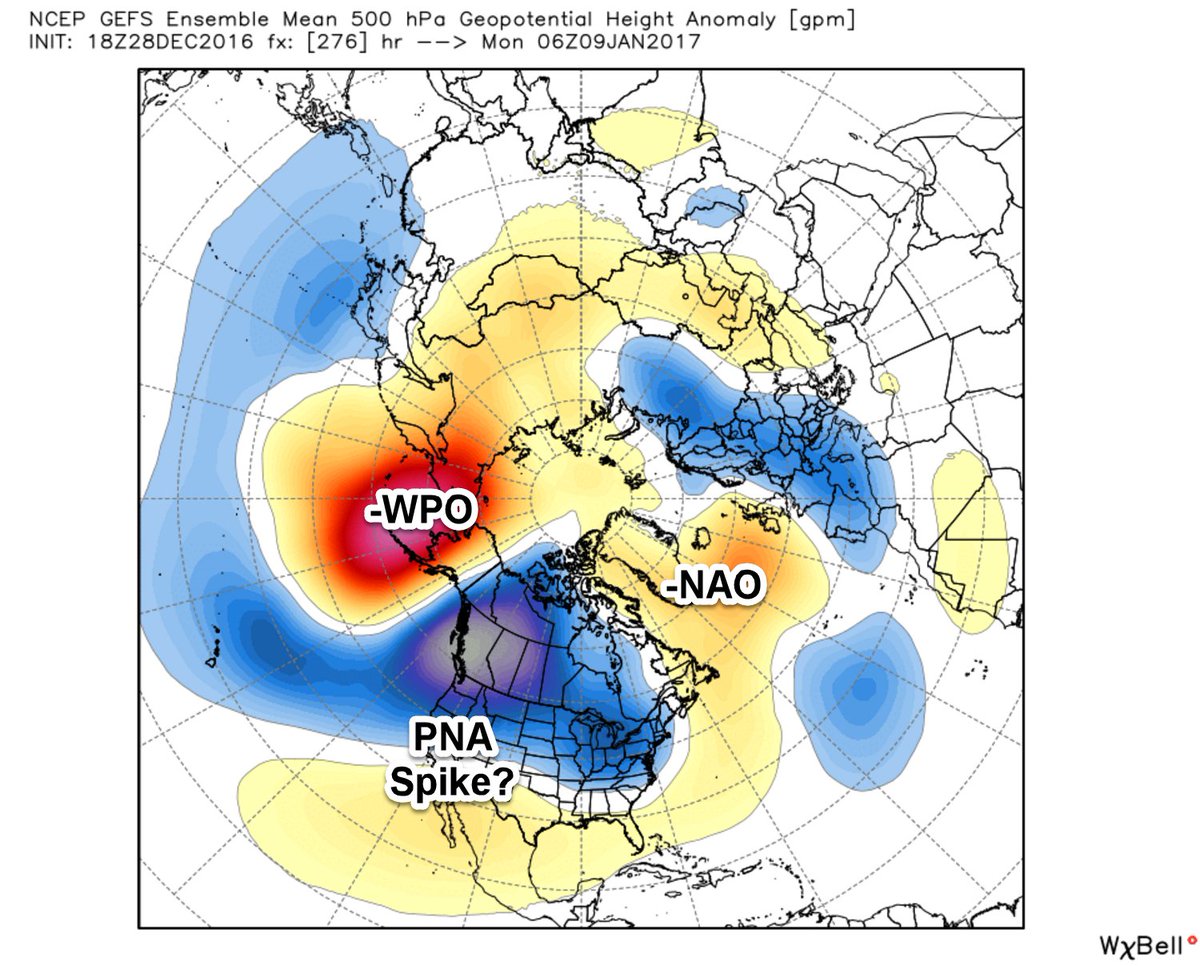 Look how the PAC & ATL ridges "squeeze" the PV (split it) and send arctic air into CONUS. Time frame to watch is JAN 6th-12th. 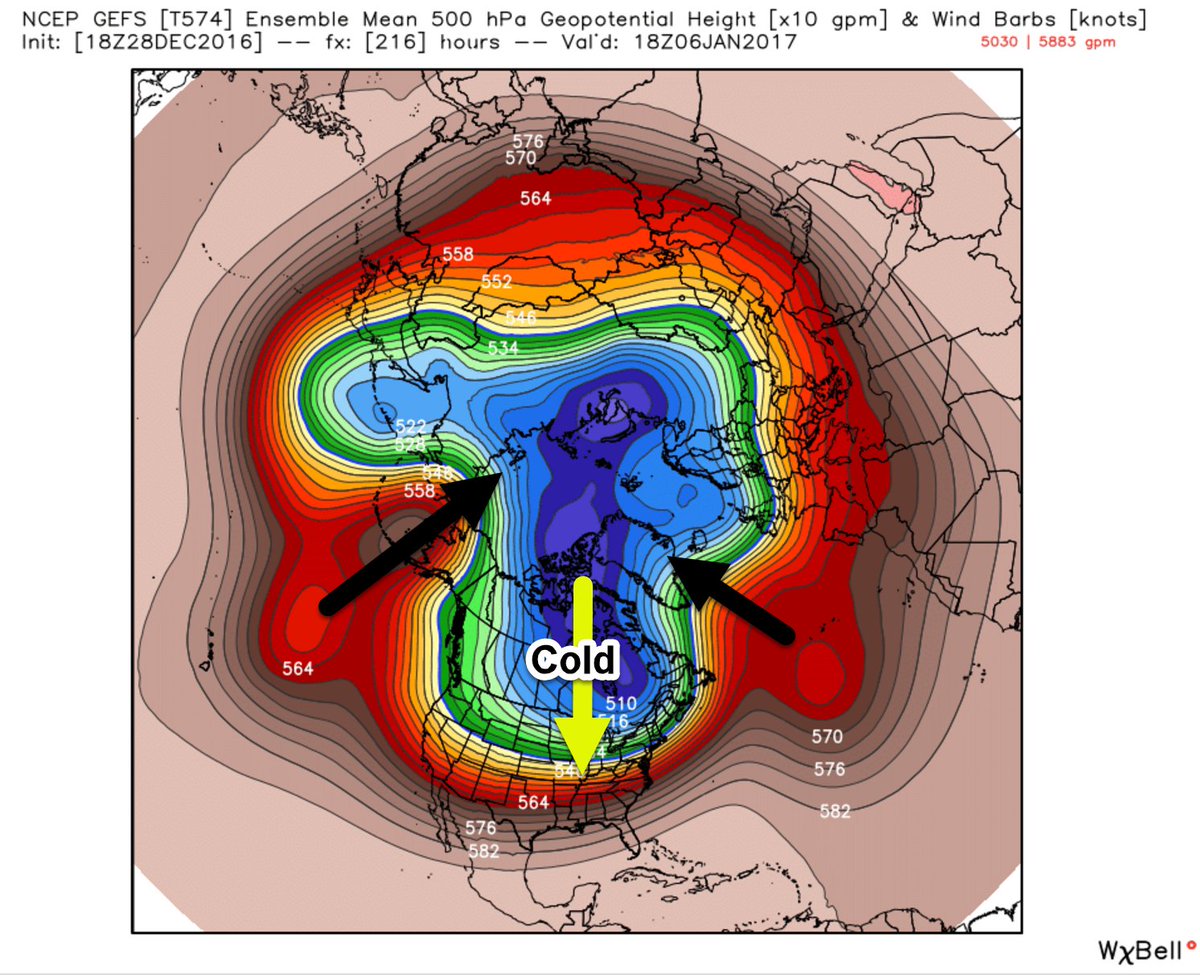 I'm not too thrilled by the fact that the lowest height anomalies are out west. I will like to see ridging on the west coast with the purple shaded regions (which Joe Bastardi likes to refer to as "Barney" troughs, a reference to Barney the [purple] dinosaur

) further to the east.

I'm not too thrilled by the fact that the lowest height anomalies are out west.  I will like to see ridging on the west coast with the purple shaded regions (which Joe Bastardi likes to refer to as "Barney" troughs, a reference to Barney the [purple] dinosaur

) further to the east.

Good point, but could not that trough shift east over the next 48 hours (this is early 1/7) as a storm develops along the east coast?

Even with the core of the cold to our west, this setup seems plenty cold enough to support snow here, fed by moisture from the subtropical jet. Frankly if the core was directly over us we'd probably be cold and dry, it's almost better to be on the eastern flank of the cold air mass.

Just a quick follow u on a prev discussion from Dec 19th regarding the stratosphere:  Here is an excerpt from that:

@sroc4 wrote:Al I have some serious issue with Steve D's LR write up regarding the strat this morning.  I dont have time to get into details, but IMO he either doesnt have a clue on how ity works or he doesnt think his clients do.

In all fairness Scott The Vortex does look like it takes a few hits Post 10 days. Yes it's going to strengthen and become strong now but who knows what happens as we move into January. The pattern looks real bad for the next few weeks however we do not have the same base heat as we did last year so as you alluded to in your earlier post maybe not as Torchy.

I will disagree with that for now Al, but like you said LR forecasts can still change.  My biggest problem is what he is saying about what is happening in the Strat right now.


Ladies and gentlemen, I give you support for a warming stratosphere once again.  Above is the chart for 70 MB observations which is updated every day after 00Z soundings are retrieved.  As you can see, there has been a clear cooling off of the stratosphere at 70 MB and this can be seen up through 1 MB, which is actually averaging below normal.  Over the past 5 days, I have been monitoring the warming that has started at 70 MB and this has now extended to 50 MB, and now just this morning 30 MB.  The stratospheric cooling is over.

Pay attention to this area circled on all the maps Im about to show.  Here is the 70mb map he is refering to:  Yes a small spike warmer: 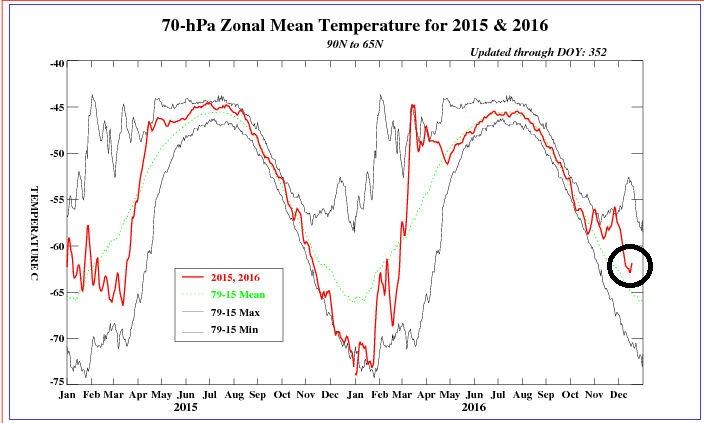 No actually, the strat cooling is just beginning. And no there is not warming at 30 and 50 mb right now nor is there any immediate forecast to.


Here are the updated temp time series graphs showing very clearly that all levels of the strat, 70mb, 50mb, 30mb, 10mb, and 5mb, have cooled significantly and are below avg for temperature: 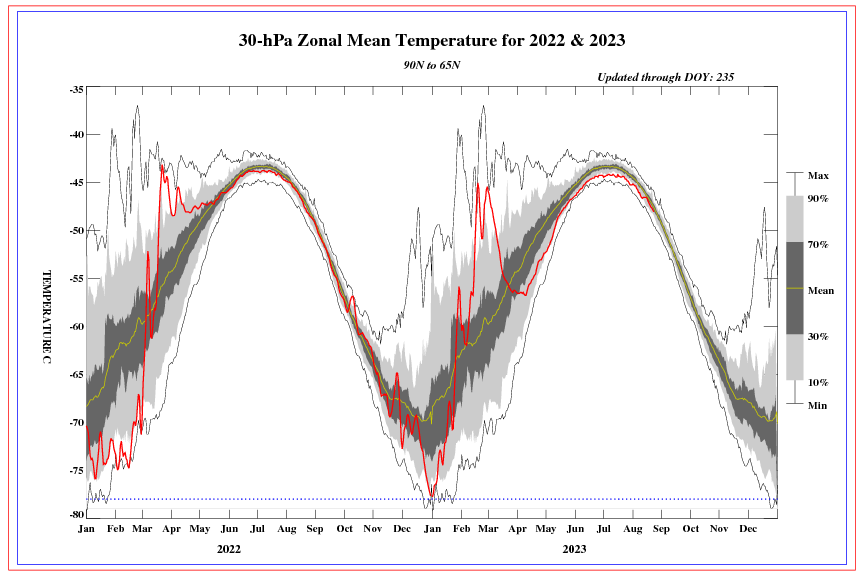 There is some good (decent) news however.  The strength of the winds, are not nearly as strong as they were lastyear, and it does appear that there is a wave one attack that is forecast to occur on the strat through the first 5-7days of Jan indicated by the circled areas:
First map is the winds and the flux intensity.  The bottom circle shows the intensity of the flux.  Moderate, and not quite in the direction preferred however.  The flux is directed more equad vs poleward and is moderate intensity. The top circled area shows the forecast for the winds at both 10 and 30mb to weaken a little before restrengthening back towards where we are now.  (note: forecasts are black lines, and the colored lines are the actual values)

This second graph simply shows that its a wave one, and not a wave two.

Notice; however, in this next graph, temperatures, that there isn't really any major warming as a result of this wave one attack. The black dashed line is the avg mean temp. Although there is a small spike towards avg at 10mb there is no significant warming forecasted.

The good news with this wave 1 attack is that it does look to prevent the strat vortex from consolidating even further and becoming even stronger over the arctic like it was this time last year.  Instead it seems to keep it kind of status quo or maybe even lead to a slight elongation of the strat oriented such that it may extend slight into NA in the 7-14day forecast.  Basically the strat will have only subtle influences on our weather over the next 2 weeks or so, but more importantly the forecasted wave one attack should keep it weaker than it was this time last year such that hopefully as we head towards the end of Jan (around the 20th or so) any additional, hopefully stronger, Wave 1 or 2 attacks will hopefully have more profound effects on the strat leading to a more significant warming event because it wont have to overcome the intensity of the strat strength like last year.

Just for a comparison here is 10mb strat vortex as of today vs Jan 4th 2016 last winter.  It is clear that although orientation ius similar the strength is much weaker this year compared to last. 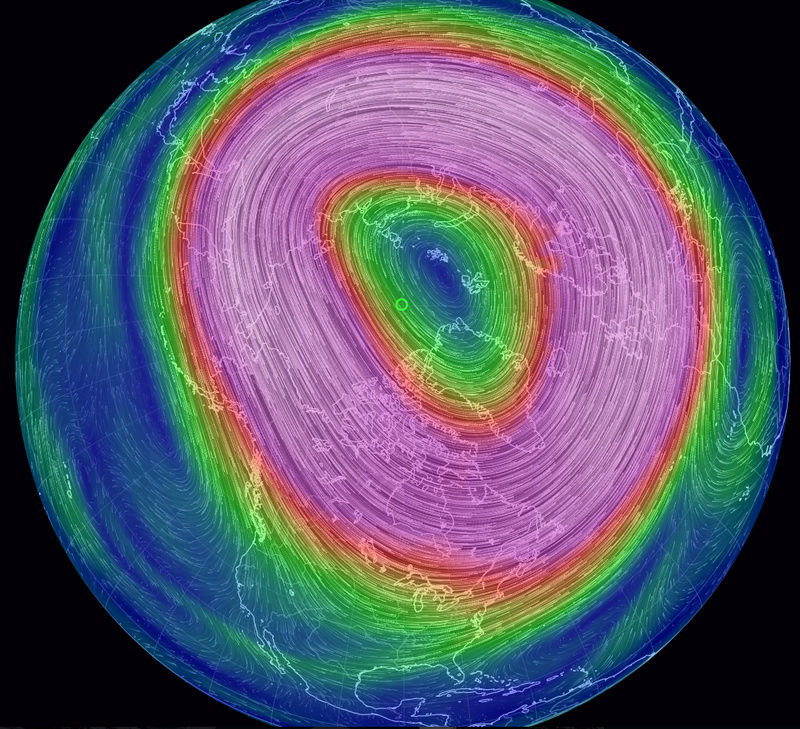 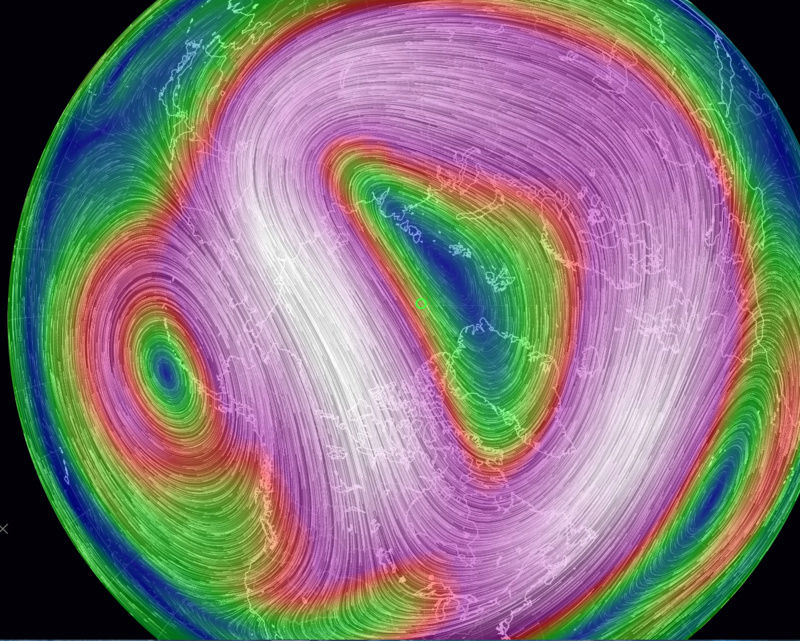 True, although one may posit that it's akin to utilizing 1995-96 as a barometer against which to measure annual snowfall. In other words, last winter was such a vicious powerhouse that anything will look weaker. This winter's vortex, particularly in the upper levels, is one of the strongest vortices I've seen. The top 5 positive coupled AO+NAO values in late December are reflective of that. The potent westerly shear stress via QBO modulation is undoubtedly contributing as well.

@Isotherm wrote:True, although one may posit that it's akin to utilizing 1995-96 as a barometer against which to measure annual snowfall. In other words, last winter was such a vicious powerhouse that anything will look weaker. This winter's vortex, particularly in the upper levels, is one of the strongest vortices I've seen. The top 5 positive coupled AO+NAO values in late December are reflective of that. The potent westerly shear stress via QBO modulation is undoubtedly contributing as well.

Great point Tom.  One that didnt really cross my mind because as an individual who is only recently involved in these types of details, I dont have extensive experience from which to compare.  Unlike last year however the SST configurations in both the trop Pac as well as the N Pac are such that poleard ridging in the EPO and or WPO regions should persist for at least a decent amount of time.  The results of which, and correct me if Im wrong, is what is leading to the wave 1 attack I just discussed.

The way I see it as long as we can cont at least these sorts of moderate attacks periodically throughouit the rest of Jan and Feb hopefully it causes enough of a persistent perturbation that we cont to get at least an elongated vortex, even if it is in the strong category. If the axis of an elongated vortex can cont to point towards and extend over NA then at the very least some of the other tropospheric indices, MJO, mountain tourge/AAM, etc.,  can cont to allow for discharge of colder air masses into the CONUS offering up at least the opportunity for snow chances.  Its all we can ask for given the state of the strat right?

Great info Scott! I as well am looking forward to the u-wind +QBO data for the month of December. If anything, it probably will remain to its output back from November, if not maybe a bit weaker. Looking at zonal mean temperature at 10mb, we actually see the vortex colder than the mean threshold and relative to this time last year, it's colder! However, once you go towards the middle and lower part of the stratosphere, it's "warmer" than last year's vortex and going back to your analysis Scott, that wave 1 warming contributing to that makes sense. However, it's still pretty formidable and the +5 STD we've seen in the AO domain is no coincidence. I'd imagine we'd see more of an elongated structure heading into Jan given the data, but we're going to definitely need a wave 2 sustained warming to get more of an efficient result. Regarding the period we've been discussing (6th-12th), the 12z models are continuing to show the wintry threat around the 7th. Interesting to note that the 12z GEFS continues to show that poleward ridge into Greenland and even tries to hint at a brief spike in the PNA region. We'll see where that goes, but the look for us is gaining support from guidance. As for tropical forcing, we're currently in a phase 8/1 look via the 200 VP anomalies with convection between 120W-60W. There is your MJO support, albeit no coherent, but sufficient.

Back to next week this is a great look

12z cmc has a beaut even for coast Godzilla for all and very strong lp verbaTim will make for strong winds possibly too. Long ways out. Hope this continues to show and wI'll on gfs at some pt. I see it tries but just flattens.

IF we can get this cut off low to be west of the baja where it is modelled on the euro this would mean a pumping of the Ridge over the west coast and would drive the storm UP the east coast. 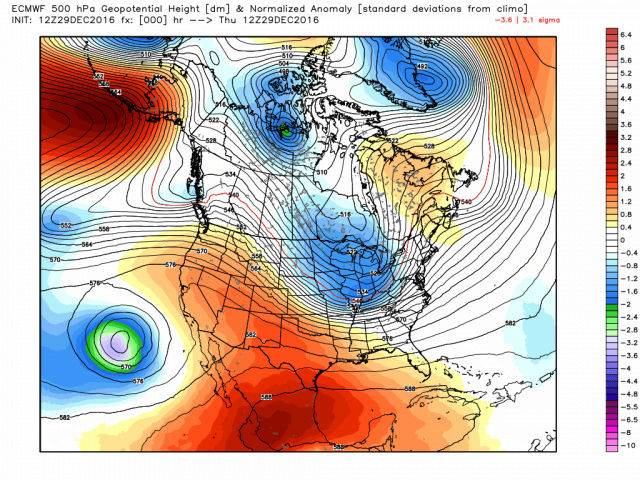 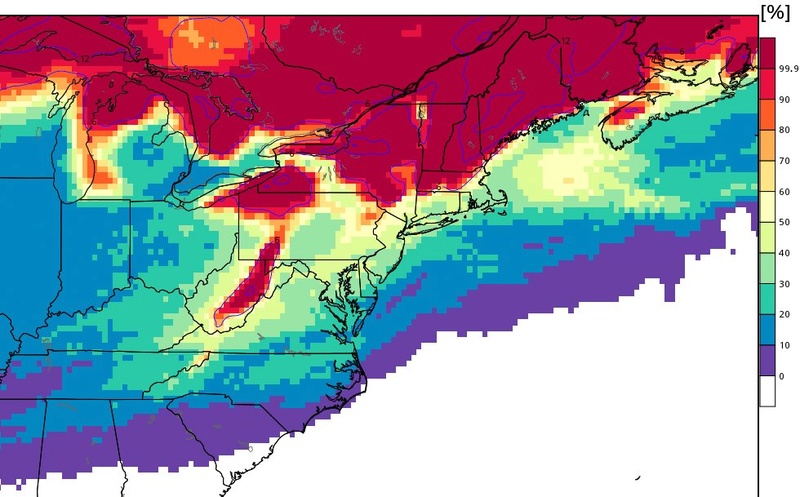 Look at the disrepancy between the EPO for the GFS 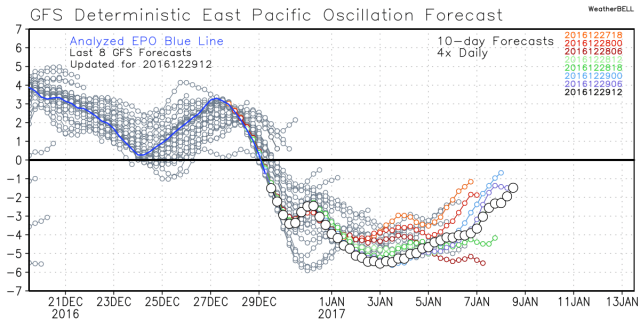 And Euro says what u talkin bout GooFuS?? 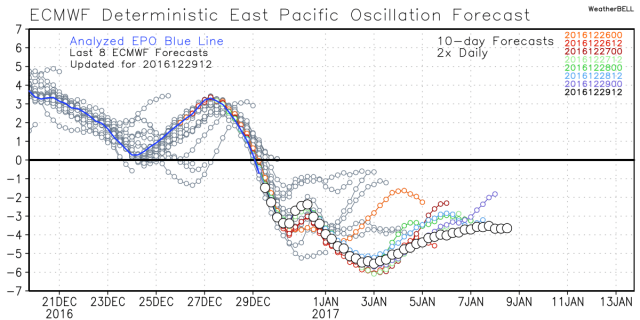 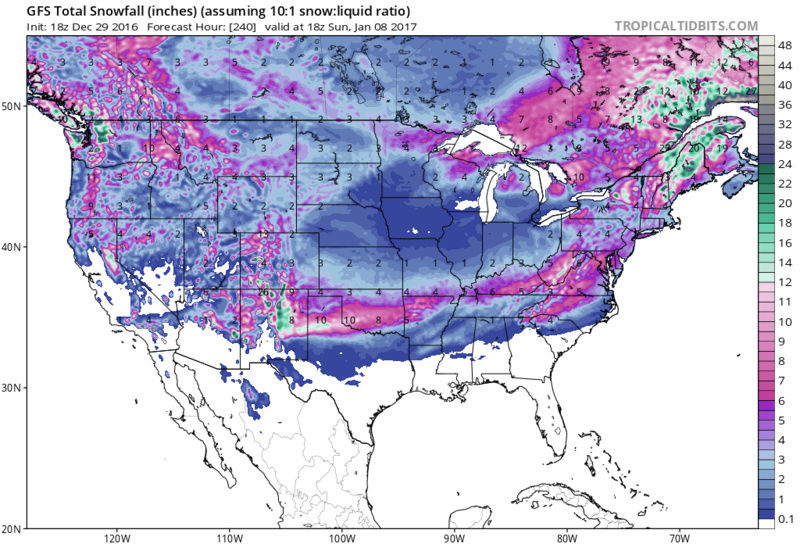 msybe coming into line with cmc?

I don't have euro.maps but on tt looks like it too has a lp being the weakest and cmc bring the strongest as always. Still May b a exciting Week finally.