When can the excitement become a legitimate chance of coming to fruition? The board has been quiet since the positive news broke early afternoon regarding the "potential" upcoming event.

I would say by the weekend

@DSix...I don't know, I'm worried that the polar air won't stay down long enough or we'll lose blocking in the Atlantic..Sorry this winter has been sooooo lame, I'm being a Debbie Downer. The Rock Salt and Shovels are still waiting by my door

dsix85 wrote:When can the excitement become a legitimate chance of coming to fruition? The board has been quiet since the positive news broke early afternoon regarding the "potential" upcoming event.

@emokid...My wife said I've been a debbie downer and that I'm acting more miserable than Syo does when "Heat Island" gets shafted with these Miller B set ups! Jealous Syo had a nice snowfall by his parents..
@Frank.. ah, to be young again. Enjoy your New Years. Really hoping the progged pattern does in fact pick up steam. That would make 2017 start off on the right foot.

Great! Can't wait. Apologize for my rants; really belongs in the banter thread.

Frank_Wx wrote:I have a video being made. Should be ready within 1 hour.

You asked Janet, Scott, and myself in a video message last February what the forum would think if you did video blogs?  I relayed your message to this site while you were at your grandmother's house.  It never got discussed beyond that because the headline was another possible significant snowstorm from the 18Z NAM that day.

I would love videos Frank if you can do it regularly would be awesome, for some reason I for one understand things better when they are spoken not written. Enjoy your New Years, don't get into too much trouble LOL

@Dsix - Agreed, it's banter. Let's tie it back into reality - my wife turns the area above our house into a heat island when I'm checking this board all night! haha jk. I guess this pattern is really active though, I'm hoping it doesn't stay cold and rainy - I'm just south/east of 95!

Thats the great thing about the tread, you can go off there (appropriately) and its perfectly fine, thats why Frank made it cuz I think like a year or so ago things got so mucked up in threads that needed to stay on point. Lets all just stay hopeful, if theres anything I have learned over the years, there can be exciting years and very dull years, thats weather for you. Lets hope we get ST around the 7th, but if not do not lose it, look back at storms that happened that we never fathomed ie. Sandy (not saying I wished, or wish anything like that again but only mother nature knows what will actually happen and MAYBE SR models.

-NAO this pattern looking to hold here? Maybe - looks like we may have an atmospherically feedback happening. Look at the bridge being built over the top. 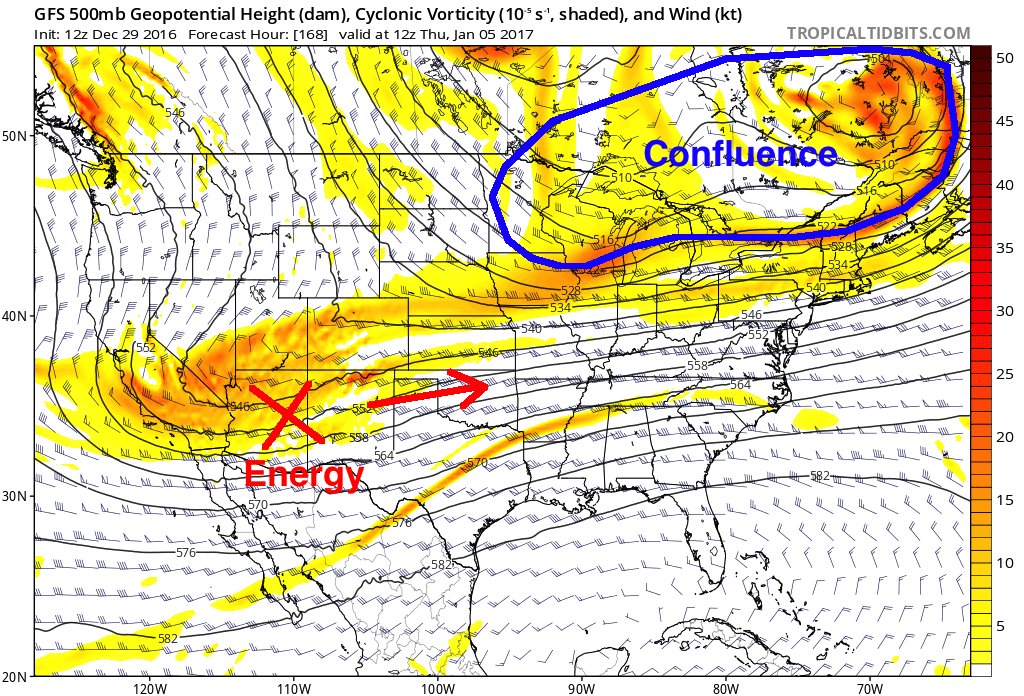 GFS has some snow for tomororw

Does this have any merit?

Haha - I meant a music video like I typically do. I think I am a better writer than speaker so not sure how an actual video of me will come out. Alright, I'll try it next time. Anyway, here is the music video looking at the forecast for the first 10 days of January.

Great video Frank haha. The music made it even better with Pitbull. Models will play those games, but take caution. So far, guidance has trended stronger a bit with the Greenland ridge. With a wavebreaking event over the Atlantic, i can buy it.

Nice GFS run. From past experience when models show 2 potential storm systems within 2 days of each other it likely means they're uncertain about which short wave to focus on. As we head into next week I have a feeling they will consolidate the 7th-10th into one system. If that east-based block bridges with the Pacific ridge to form a -AO/-WPO/-NAO pattern that would greatly increase my confidence in something materializing for our area. It's a matter of figuring out exactly where the NAO ridge sets up and how strong it will get.

The way I see the 7-9th time frame: Keep in mind there are differences between models at 500mb, and there is still a long way ago before we know how it all plays out.  What we see now and what I will highlight WILL CHANGE, for better or worse.

The system that will cut to our west the middle of next week and give us well above normal temps, and more rain as Frank illustrated in his video will drag a cold front through the area later in the week.  This will signal the beginning of the colder weather pattern being advertised for the time frame between the 5th-12th at least.

Now the 7th-9th specifically there is def a storm signal; simply meaning that some of the larger scale upper level features are modeled such that if the right ingredients are added at the right time a decent shot at a wide spread snow event for our area is possible.  To reiterate its possible not definite.

Here is the way the upper levels are currently set up and the reason why at he surface we do not see the system crushing us with Godzilla for now hopefully.  Personally I NEVER want to see us locked into the bulls eye beyond 5-7days so for now we are right where we want to be; however, there are upper level features that need to trend differently in order for this to happen.

Lets use the 00z euro 500mb map, image valid 00z Sat Jan 7th, to show the key features the way they are set up now.  After next weeks cutter pushes the cold front through a boundary layer will set up off the coast.  Warm moisture laden air will ride up and over this leading to wide spread precip along this boundary with weak area of LP developing along it. 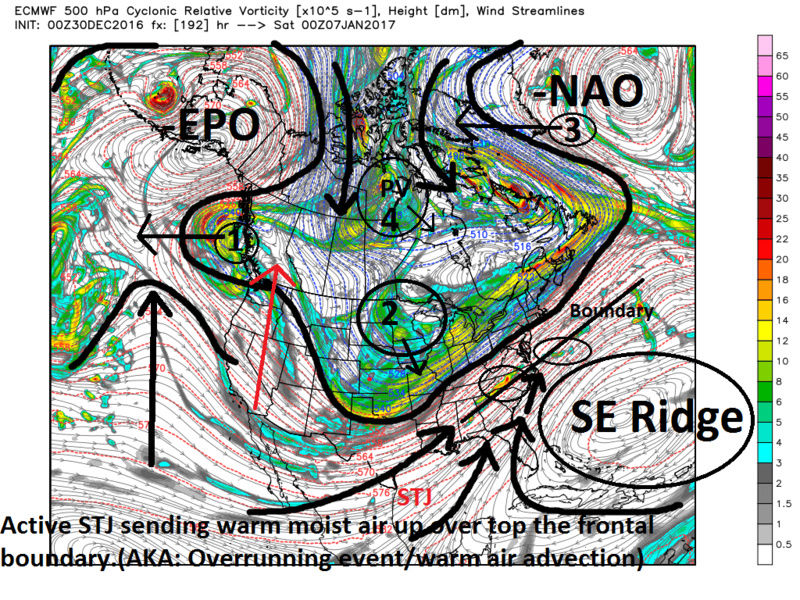 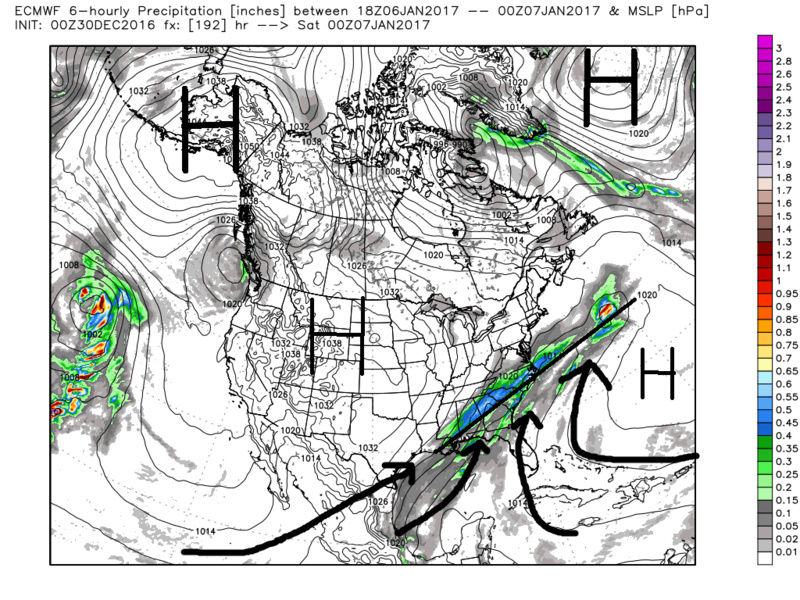 As of now there isn't a mechanism for the trough to dig into the boundary leading to strong cyclogenesis and a system that comes up the coast as a trough tilts neg.  Instead the trough remains positive tilted as it exits the EC keeping the flow progressive, and the boundary remains to our south.  It moves off shore and we are left with a close call.  Again this is simply verbatim the way models show it now.  GFS is even weaker with the main trough and even more progressive with the energy and precip...no surprise.  But the upper level features are still looking good and we have plenty of time, but we still need a few things to happen.


1)  If the area I labeled 1 on the map were a little slower to coming onshore in western Canada this might lead to a ridge axis along the western CONUS (red arrow) instead of a ridge axis that is out in the Pac (black arrow).  This would help to drive the area labeled 2 into the trough.

2) The area I labeled 2 is a piece of Northern energy that as of now is modeled to be pretty weak.  If the ridging along the west coast trends better as indicated above and or if this energy trends stronger and a tad faster then it might allow it to dig into and phase into the trough allowing for a neutral; then hopefully neg tilted trough as it reaches the EC.  This would lead to a Godzilla potential.

3&4)  The areas I labeled 3 and 4 kind of go hand in hand.  If 4 were to trend a tad further S&E over the Hudson Bay it would leave room for 3, the NAO ridging to extend further west.  This would aid in slowing up the upstream flow and hopefully allow the trough to dig and tilt neutral to neg.  However if the NAO ridging trends stronger and further west, 3, then it would likely lead to 4 on the map further south.  Same result for sifferent reasons...which came first the chicken or the egg. Who cares. Now in general If 4 is too far south and esp east it could lead to suppression as well.

Any or all of these things outlined could help our chances should theytrend the way described.  That said I am sure there are other things that I did not outline that could also play a role for better or worse.  For instance how strong the SE ridge is.  In the current set up, however, I do not believe this time frame we see a cutter due to a stronger than forecasted SE Ridge.  Its either a mild-mod snow event for our area due to a progressive positive tilted trough and WAA, or the boundary is too far south so its suppression depression, or the trough finds a way to dig and we get a true Godzilla potential.

Watch the trends and DO NOT be surprised if we don't see the true final soln until at least mid week next week because the cutter that will bring us the dreaded warm temps next week is forecasted to be a major player in setting up and aiding in the -NAO ridging.  So how that system evolves ultimately will influence what happens after it moves into N latitudes.

Verbatim at the end of the Euro run, hr 240, I love the look of the next N vort diving into the central plains.  That will be the next thing to watch if it remains on modeling: 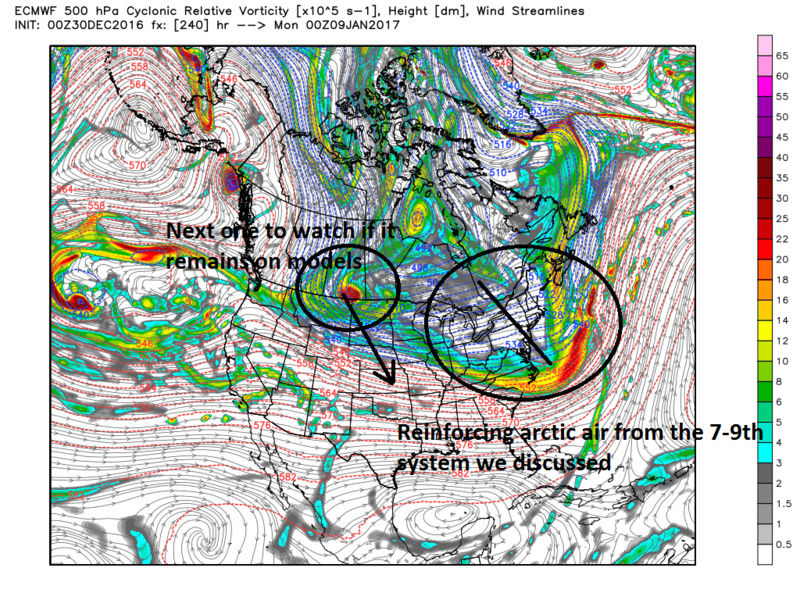 Great post Scott, and to all participating in this discussion. I can't disagree with what's been stated, although I would add that we can't rule out a warm solution for the coast yet. I believe we are going to see a transient neg NAO via the wave break and potentially influenced by MJO propagation. The magnitude and orientation of the NAO is still uncertain. The behavior of it will determine the extent to which the SE ridge impacts cyclone path.

Scott, I also tend to agree with your prior stratospheric post regarding late January. I am now looking ahead for a true stratospheric alteration, and we will be evolving into an auspicious precursor pattern over the next week to 10 days for wave 2 convergence at the vortex. The guidance is not detecting a follow up wave 2 right now as it's only 10 day guidance, but I would expect wave 2 amplitude to significantly increase by Jan 20th +/- a few days. If it is sufficiently potent, this could set the stage for an interesting February as I alluded to in past weeks. Many are of the opinion that the upcoming neg NAO will have maintenance power, but I am not convinced yet due to other exogenous signals. We shall see. The negative trend to the NAO is probably real; the EPS has been persistent with this D10+ signal for a few days now, but again, exactly how it evolves is indeterminate.

After the first week of Jan blowtorch, I will say that the mid Jan return to warmth doesn't look as anomalous. This too will be influenced by height suppression via downstream blocking.

this is prob not a great question just more bec lack of knowledge, Dont we usually see some models showing a storm over us 7 days out , how come no models are showing a big storm yet?