I hope everyone had an excellent Christmas or Hanukkah. We've been talking about a possible snow event on the 29th and since models still show some snow, and we're within three days, I wanted to start a separate thread to talk about it. 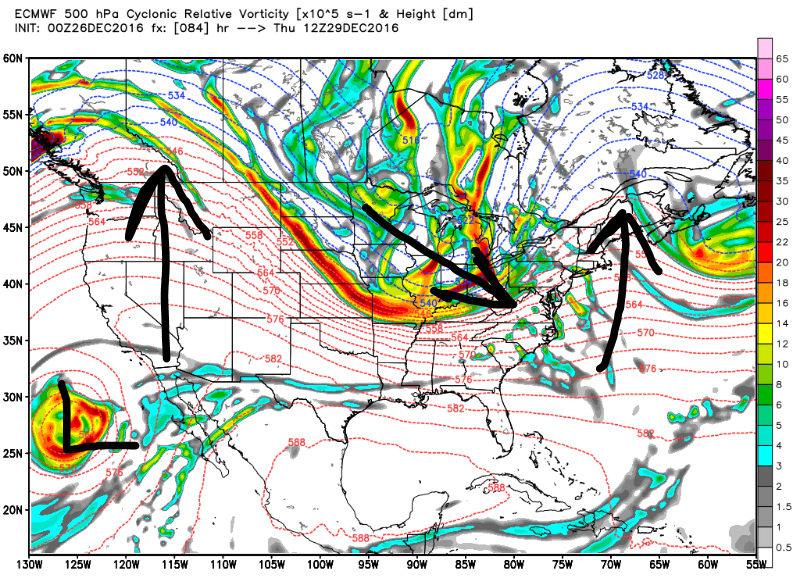 The 00z EURO 500mb vorticity map valid 7am Thursday shows why this model is most bullish with developing a surface low off our coast. While boundary layer temps are too warm for NYC and immediate coast, those N&W and into PA are still fair game to seeing a light to moderate snow event. Notice how the west coast ridge really amplifies due to the cut-off upper level low off the coast of Baja. 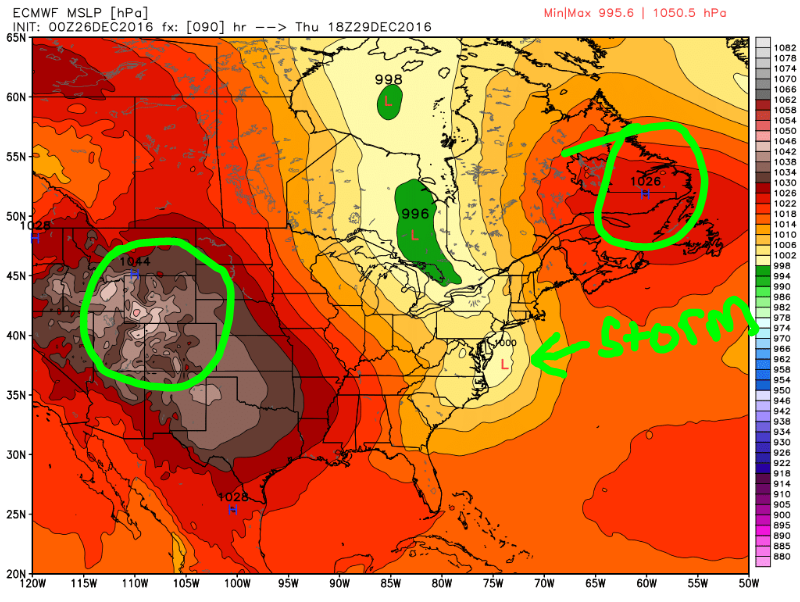 The +PNA ridge allows the trough over the east to sharpen as energy begins to transfer to the coast. There are a couple of low pressure centers actually. One in the Great Lakes (the primary) and another off the coast (secondary). As the transfer happens, a the secondary low develops and begins to "bomb" out once it gets into New England. An area of subsidence may exist between the primary and secondary low, and that is where the forecast could get difficult. 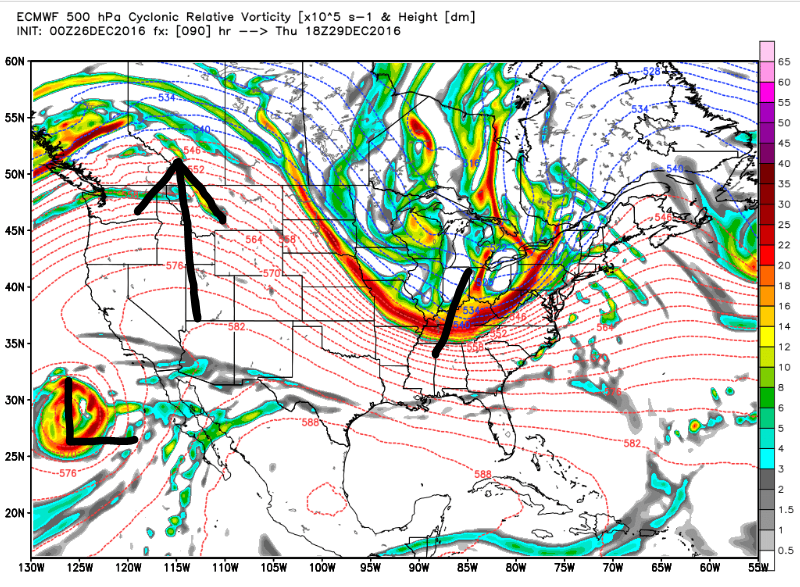 Moving into 1pm Thursday, notice how the EURO has almost a "U-shaped" trough over the east. It's neutrally tilted enough to keep the surface low close enough to the coast to send precipitation as far west as eastern PA. The timing of the transfer between the primary and secondary is critical. Faster transfer would allow the secondary low to develop further S&W and bomb out quicker, putting areas at the coast at risk of accumulating snow too. 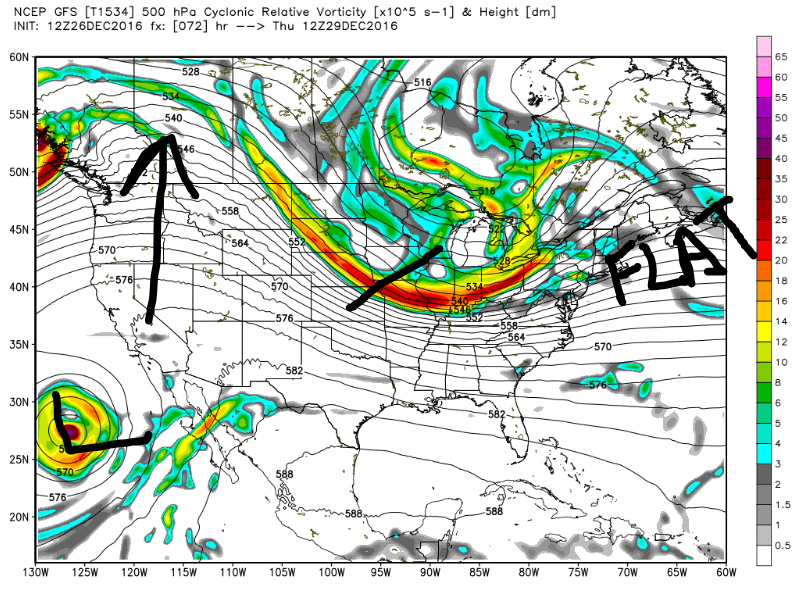 Safe to say the GFS and EURO aloft do not agree. They look similar in the Pacific, but where they differ is the handling of the PVA within the trough. The GFS has an open trough which allows some upper energy to escape east. It does not have much of a transfer. Instead, the primary low dominates and more of a "front" moves through the area bringing light snowfall to almost everyone. Notice heights ahead of the eastern trough are flat too, so the baroclinic zone stays to our south and most of the area stays cold enough for snow.

Interestingly enough, the GEFS look more like the EPS and EURO OP in my opinion and today's 12z GFS took a step closer to the EURO. This leads me to believe EURO has a better idea of how to handle the upper energy and trough as it moves into the CONUS. We'll see what today's models show.

EURO snow map. New England is line to for a Godzilla if this model is depicting things correctly.

Looks like it bombs out too far N and E of us but I would still get 4 or 5 up here in CP Land.Hoping it strengthens further south of us.

Based off this pic I assume JMA came in looking like EURO. 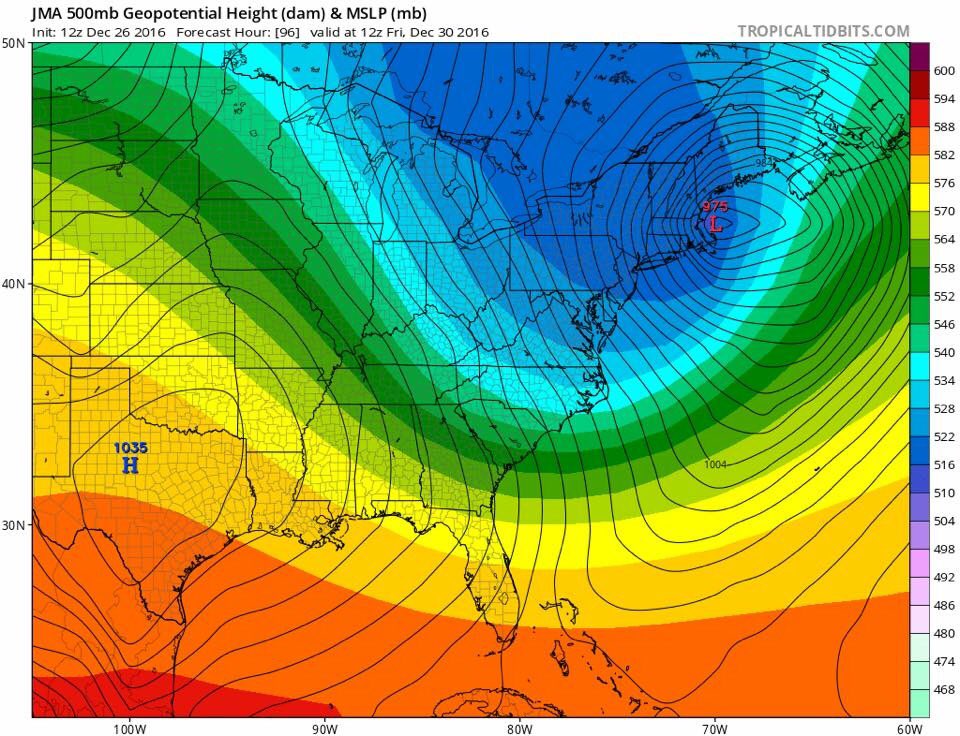 Very nice discussion from Upton on the Md and LR.  Cant argue with any of it.

Then...models trending towards better agreement with timing/strength
of phasing Northern stream and PAC energy as it digs from the
Northern Plains through the Ohio valley to the Eastern US for the
mid to late week...and its degree of interaction with the sub-
tropical energy/moisture. The sensitivity to this forecast continues
to depend on strength/timing of a wavepacket racing eastward from
the western Pacific early this week to the east coast by late week.
Models are trending towards a deeper northern trough tapping into
subtropical jet energy/moisture...resulting in low pressure
development over the Mid Atlantic along an approaching frontal
system Thursday. This low tracks se of the region Thursday and then
rapidly intensifies as it tracks into New England/Southeastern
Canada Thursday Night into Friday. Still some spread on
intensification rate and track of low pressure...but increasing
potential exists for a light to moderate precip event on Thursday.
The pattern looks conducive to a wintry mix changing to rain for the
coast with snow/wintry mix across the interior for Thursday.
Potential exists for at least light snow/sleet accumulations across
interior...particularly for interior portions of the Lower Hudson
Valley and SW CT.

In it wake...good agreement on polar air advecting into the NE US on
breezy w/nw flow Thu Night into Fri as the bombing low moves through
Southeastern Canada and high pressure builds to the south.
Temperatures should run a few degrees below seasonable...with highs
in the 30s Fri and Sat. Winds gusts in the 30-40 mph range likely on
Friday. Cyclonic flow...caa...and polar frontal passage on Friday
will present potential for snow showers/snow flurries.

With a track like that I thought that would good for snow even for the city and coast ?? Or do need more cold air

frank 638 wrote:With a track like that I thought that would good for snow even for the city and coast ?? Or do need more cold air

That's what I figured thanks frank

This is sick. Keep in mind NAM has a warm bias. 992mb low with temps crashing.

Frank, is it possible to explain the last model u just posted ? What is that showing different?

jake732 wrote:Frank, is it possible to explain the last model u just posted ? What is that showing different?

If that High to the NE strengthens it could slow the secondary low down. That could help the storm bomb out sooner. A stretch without a true -NAO, but we'll see!

Yes, but at this time I do not feel confident the Jersey Shore will see significant accumulations. Unless this trend continues. We'll watch closely!!

Thanks Frank!! just curious...Hope you had a great Holiday!!

jake732 wrote:Frank, is it possible to explain the last model u just posted ? What is that showing different?

700mb critical thickness shows where the best banding is. Areas in white are likely dry slotted or the storm is finished for them. Darkest green = heaviest precip rates.