Unfortunately, the more I look at this, the less enthused I am :/ If you are west of the Hudson, I think it may be real difficult to even eclipse 2-3".

rb924119 wrote:Unfortunately, the more I look at this, the less enthused I am :/ If you are west of the Hudson, I think it may be real difficult to even eclipse 2-3".

Im looking at all of them, honestly. There's no single model that I really like in this situation. What I do think is that it will just be a true now-cast, because anytime you have these coastal transfers, models usually collectively bust either to early or too late. Based on what I'm seeing now, though, I will say that I'm worried northern and western folks get snow-holed with this one.

In truth, I think the EURO and NAM actually have the closest solutions to what we actually see. There has been a propensity for secondary development along or near the Delmarva with many of these systems so far this year, so I think the GFS and GEM are much too slow in developing the surface feature. However, even though the surface feature develops, the background atmospheric flow is generally uniformly from the south-southwest, and strongly so, which means that it will take a while before the surface feature can begin having an influence on the temperature profiles of the levels even immediately above it. This is why we are seeing such warm scenarios even with coastal development as far south and east as it is; the background warm advection mutes the effects of the low-level system until it's east of our region. The problem is that, even though I agree with the early coastal development, the sooner that develops and starts taking over, it also starts depriving the regions to its northwest of low-level forcing because it starts creating low-level divergence, which is that snow-hole effect I'm worried about for those folks north and west. Adding further, based on my assessment of the Northern Hemispheric pattern, I can see how this trends south and east of where it already is, which would possibly make it colder for the I-95 corridor, yes, but also drags that snow-hole region further south.

NAM: 12z had a 989mb LP undergoing bombogenesis by 00z Friday such that within 3 hrs it drops 8mb, develops a CCB band, a more expansive precip shield. and drags the cold air into the NW quadrant leading to rapid changeover.

Whereas; the same three time frames on the 18Z NAM we aren't quite bombing out yet so the LP is weaker, a tad further E and the subsidence zone passes over the entire area moving the precip out quickly, before bombing it out later and further N.

I think I may have an idea about this system, actually, although I don't like it lol

Frank_Wx wrote:An idea? Are you going to speak to him/her?

Here's my first call for this event: 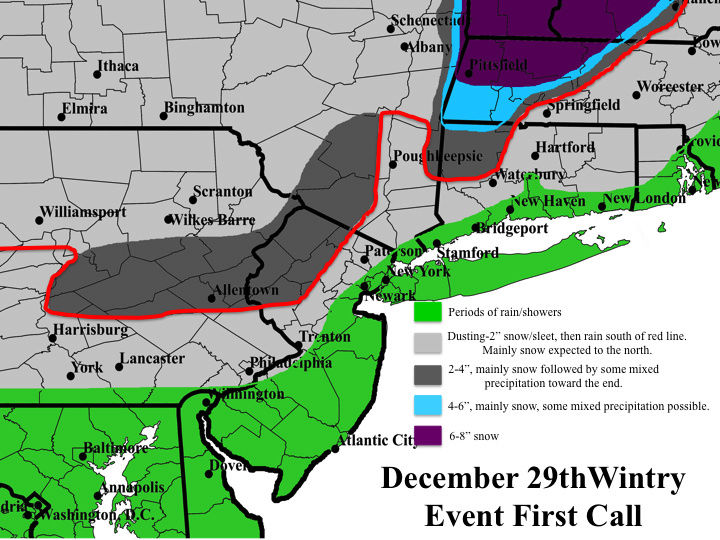 Worst of the system misses to our northeast, as is climatologically favored with these events. The reason for the swath of 2-4" through eastern PA, NW NJ and the eastern Catskills is because I feel that there will be meso-scale convergence at the low-levels enhancing the precipitation rates there. North of there I kept amounts low because it appears to me that there will be low-level divergence, which should mitigate some of the low-level warm air advection forcing mechanisms. Combine that with a lack of a significant bridge in forcing mechanisms between 850 hPa and 500 hPa, and lack of sufficient jet dynamics, I do not feel that those areas will see much more than a period of snow showers as the front drifts through. To the northeast, that is where I feel the coastal low will be rapidly taking over, which is why I have significantly higher amounts, although inland, as there will be a large surge of warmth well into the coastal plain of southern New England.

I'm sure many of you will think I'm crazy for this map, and I agree I don't have very much support. However, I do expect this to trend a bit further south over the next 24-30 hours, which should cool the thermal profiles a bit. This will also support my western 2-4" zone through eastern PA etc. as that will shift the meso-scale convergence into that region. I am very uneasy with the region northwest of that, as there is decent bust potential there, but at this time I am not seeing enough overlap through the atmospheric forcing mechanisms to warrant expanding higher totals northwestward......YET. That very well may change haha Updates will be issued tomorrow, likely after the 12z suites. Discuss!!

Here's what we did this evening... hopefully these hold and they don't have to be cut in half like usual for tomorrow's final call... 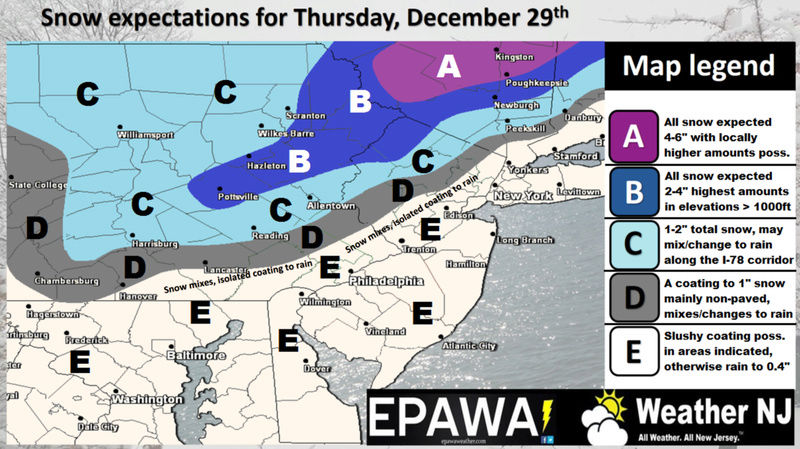 Not as different as I thought! Hahaha nice!!! Definitely agrees with most guidance, so it looks like you're ok l.....for now lmao who knows what changes await us over the next day of runs aha

My 1st call is made with the premise that the secondary low does not undergo cyclogenesis in time to benefit our area. In addition, the decaying primary low in Canada provides too much of a SE flow which keeps surface temperatures above freezing. There is also a warm layer at or just below 925mb depending on your location. Rain may turn to snow as Thursday wares on, but I would not bet on it sticking unless you live in a blue shaded area where you will turn to snow sooner than the rest. Since Miller B's are difficult to predict I have a feeling we don't know the final solution yet. A final call will be issued tomorrow if necessary.

I cant argue with any of the maps.  Unfort this Miller B is occurring without a cold air mass in place so the system needs to generate its own cold air in order for the coastal plain to really benefit.  It will only do so by bombing out.  And as has been pointed out by the rest it does so just a tad bit too late.  The SE flow ahead of the primary will warm the surface layer.  In general when the MSLP center to one of these systems passes inside of the bench mark the coastal plain typically suffers with mixing and or rain issues anyway.  Models pretty much agree, global and short range models, that the MSLP center will pass inside the BM somewhere between E LI and eastern tip of the Cape as it then proceeds to bomb out and head up the NE coast.

I will not make a snow map because the others pretty much agree with my thoughts; however, I will post this map. 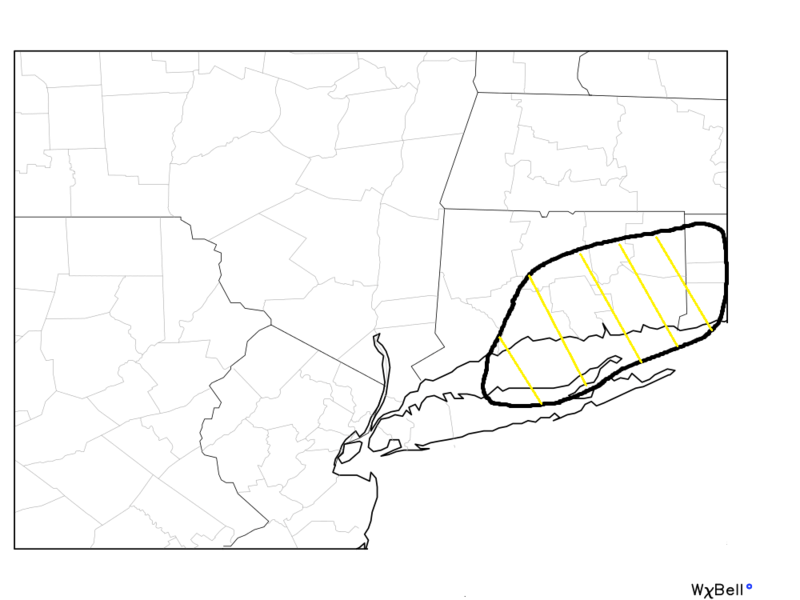 The area I have highlighted could have surprise snow totals relative to the maps posted on here and to what the model consensus currently is.  Currently I give this less than about a 10-15% chance of happening.  The reason for this is fairly simple.

On Monday I posted the 850mb vorticity maps showing the differences between the GFS and the Euro. On the 00z Euro Dec 26th run 850mb closed off right over LI by hr 96 valid 00z Friday Dec 30th.  The trend since then; however, is to have 850mb close off about 6hrs later.  Ideally we would have liked to see this level close off 6 or so hrs earlier and 50miles south.  Here is Dec 26th 00z hr 96 Euro followed by last nights 00z hr 48 Euro; both 850mb valid for 00z Frid Dec 30th.  Notice 850mb is now modeled to remain open as the energy at this level rotates through. 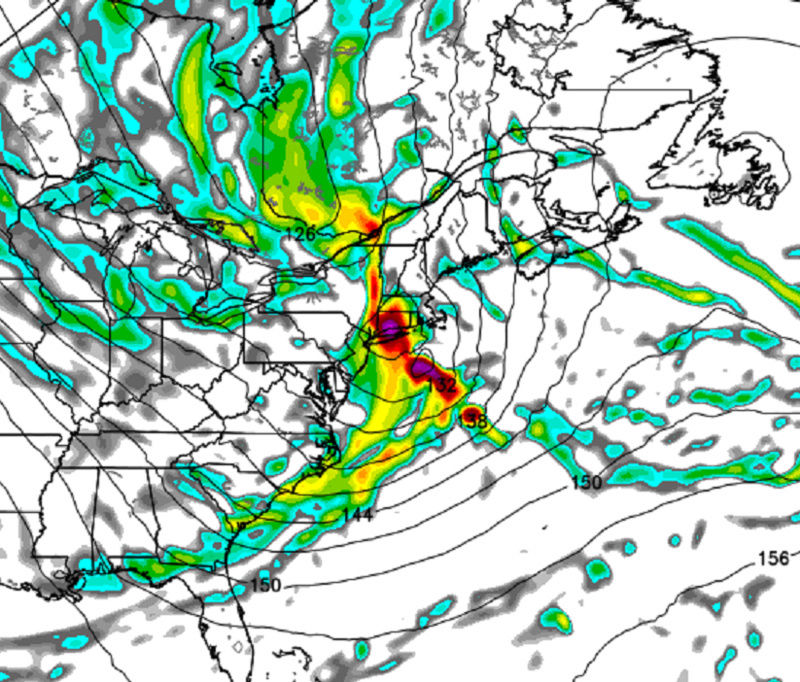 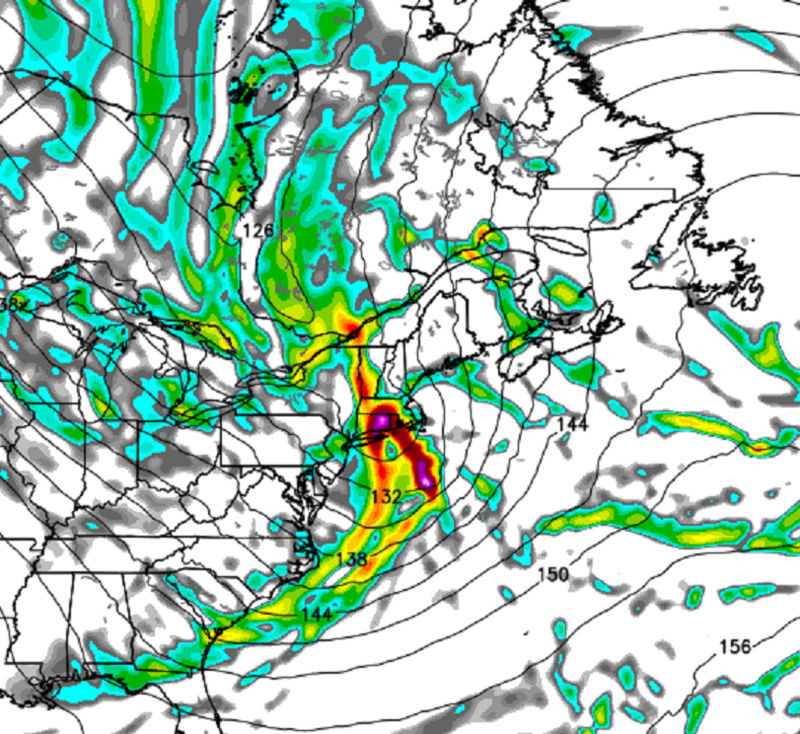 Well that did it for me. If I get more than 2 inches it will be a minor miracle. 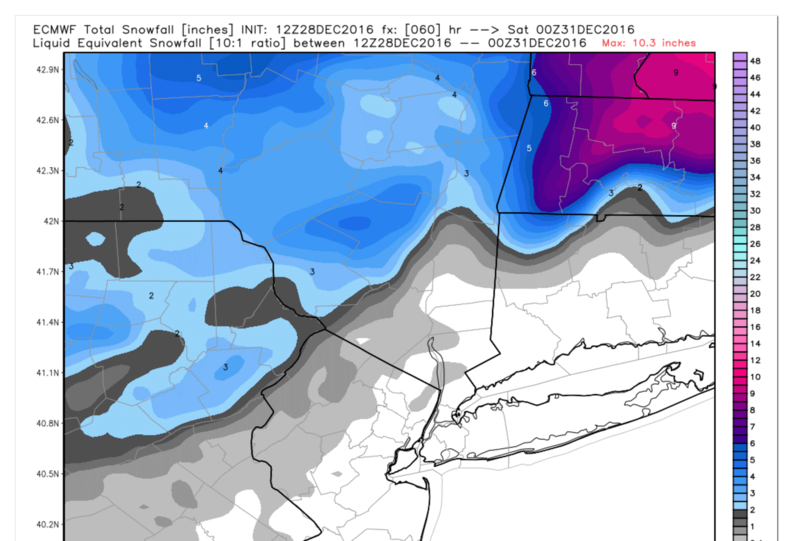 amugs wrote:GFS and bit colder and EURO colder and further east but does not bomb out as needed  - Good for a few Inches N &W - coastal plain ugatz
12Z GFS

Haha mugsy, look at the Euro trying to get us some! Pity snow for our usual black hole I guess!

WWA for Orange and Putnam counties in the LHV for 2-4 inches of snow.

Anything over 2 IMBY will shock me but I'll gladly take it if by some miracle it happens.