We are indeed ready. Thank you to everyone for the time that they put into this site, allowing some of us who are not versed in meteorology but are supremely fascinated by it to better understand what is happening.

That said, I am thoroughly prepared in a geeky "Red Five standing by" sort of way. Saying some prayers for a 50-100 mile shift to the west.

sroc4 wrote:This is simple.  Who do you believe.  Below I have both the GFS and the Euro side by side...GFS left Euro right both valid for 18z Jan 7th.  There are a few things to point out.
1) The S energy on the Euro is even stronger and more consolidated in the base of the trough when compared to yest 12z
2) The S energy on the GFS in the base of the trough has trended stronger overnight as well...which is good.
3) The S energy on the GFS; however, is further east then the Euro at this time frame.  (A known progressive bias for the model).
4) I have highlighted the 540line with a black line on both models.  Notice the GFS has it running through the lower HV; whereas, the euro has it way up in mid NY state.
5) If you watched Bernie Rayno's video last night he noted the importance of the energy to the N circled.  Its this energy that in essence is what either allows room for it to come up or pushes it offshore.  He noted it needs to trend a little slower and remain behind the S energy in order to allow the heights to raise out in front of the system allowing it to come up.  As you can see both models have the S energy out in front of the N energy.  Important point.  However, notice the GFS has stray vorticity pressing down into the E GL relative to the Euro.  It remains stronger and more consolidated within the circled area.

The area just S of this 540 line I highlighted is the area of confluence (area where the wind fields from the N and S branches converge at 500mb) As you are prob aware convergence of air aloft leads to air sinking; therefore, the precip shield will not make it beyond the confluent zone.  The further N&W it is, the further N&W the precip shield can make it.

So the question is which model do you believe?  For me with a known progressive bias of the GFS with S branch energy I have to believe over the next 3-4 runs we will see the energy in the S branch cont top consolidate like the euro shows; consequently the height field and confluent zone "should" lift N&W out ahead of the system more like the euro on consequent GFS runs.  However; this is not a lock.  The question is which is handling all these s/w better?  The EPS means and trends supports the Euro Op, but the GEFS mean supports the GFS Op.  We shall see.   I will show the EPS updates in a different box. 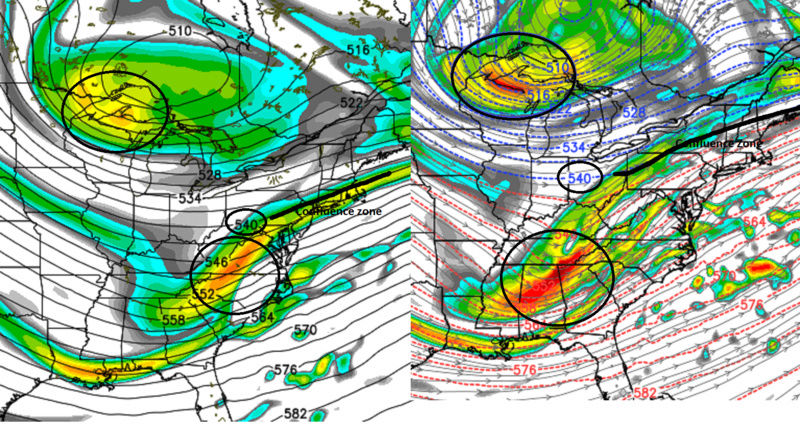 Here is Bernie Rayno's morning update time stamped 6:00am. My post is time stamped at 6:19am. I swear on my kids I did not watch this before my post.

These waves have been super interesting...Let's see what happens as the energy is sampled tonight!

Mt Holly with a discussion that echoes our thoughts with regards to the upper level energy:

Mt. Holly wrote:For Saturday and Sunday...A significant trough slides across the
Great Lakes region Saturday, while within the split flow there is
energy moving across the southern states. The latter will be
tracking along a baroclinic zone with low pressure moving off the
Southeast U.S. coast early Saturday. Given the split flow the model
guidance has shown varying solutions, and the key appears to be the
timing of the two main pieces of energy. If the southern system can
stay ahead of the northern one, more of a turn northward would occur.
This would pull the precipitation shield more north and west, like
the 00z ECMWF shows. If the southern feature is weaker, then the
surface low shifts more offshore and the precipitation shield is not
as far north and west. Taking a look at the 500 MB pattern, this
system has a chance, with even the more offshore GFS showing
potential to back closer to the coast if the southern short wave can
sharpen a bit. We will still run with some low chance PoPs closer to
the coast on Saturday given at least some potential for a period of
snow. This remains a low confidence forecast given the pieces/flow
involved, however there is the potential for a snow shield to
overspread at least our southern and eastern areas for a time
Saturday.

good morning, can I ask how to find those maps for my area? TIA

As Hans Solo said to C3PO as he tried to navigate an asteroid field, "Never tell me the odds"

Cool graphic. That's not what I was looking at but ok. Still not great though.

good morning, can I ask how to find those maps for my area? TIA[/quote]

gfs went from this for wave one

so very possible same can happen for wave 2.
notice how it corrected on its progressive bias as we got closer to the event

good morning, can I ask how to find those maps for my area? TIA

thank you!! was on the site earlier and did not see that...have a great day! 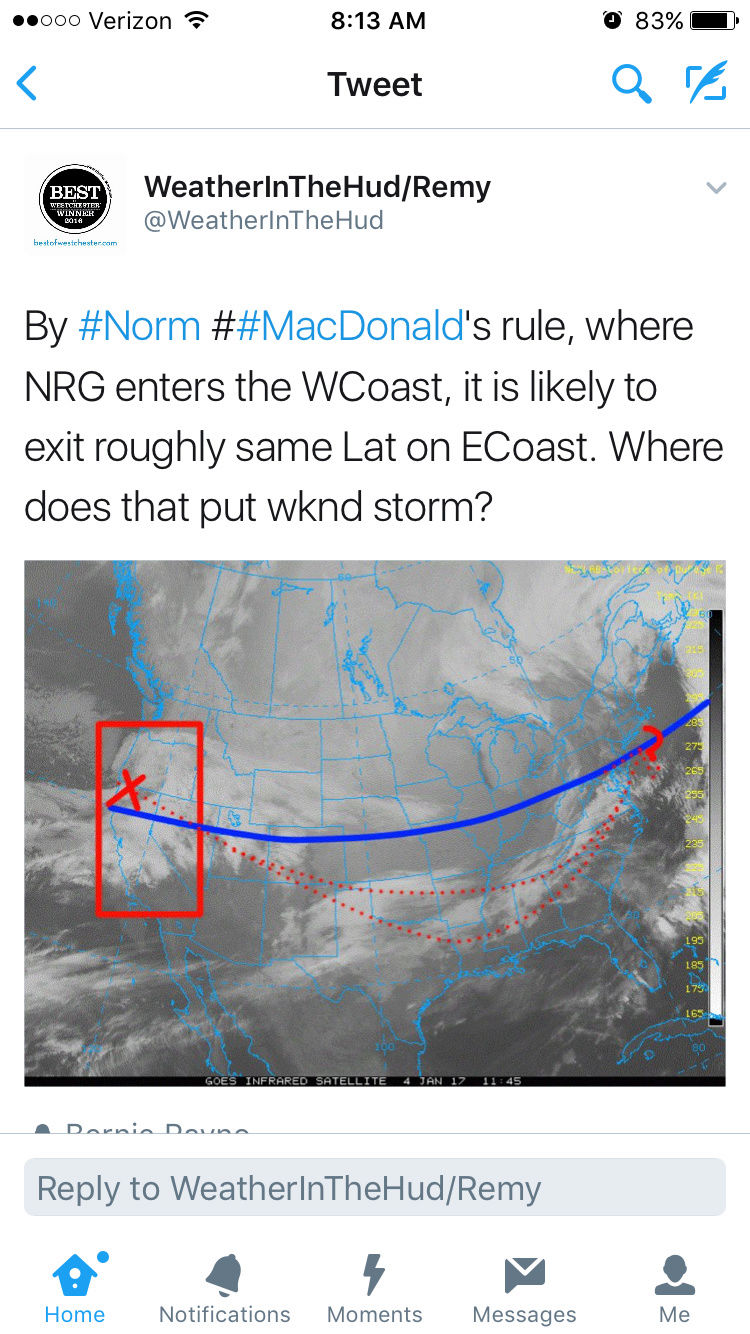 Pass it through Congress Ryan.

Pass it through Congress Ryan. 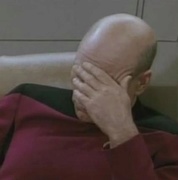 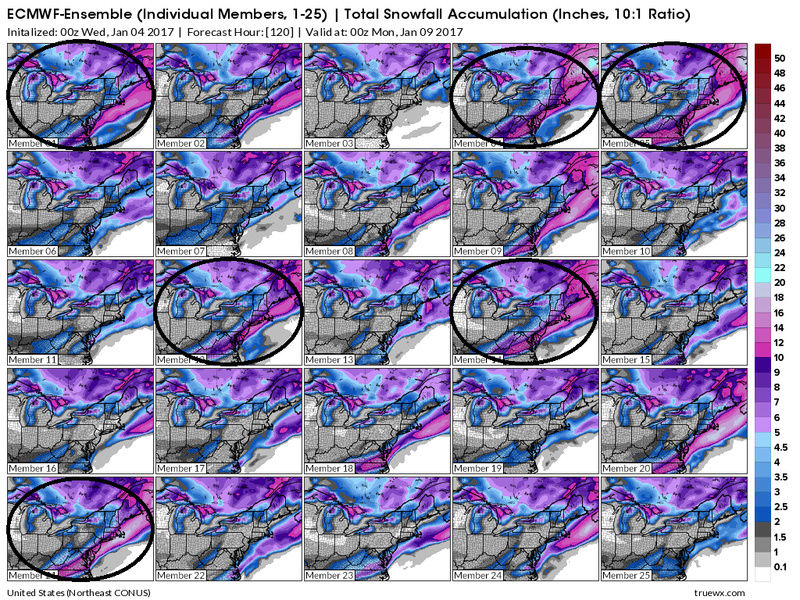 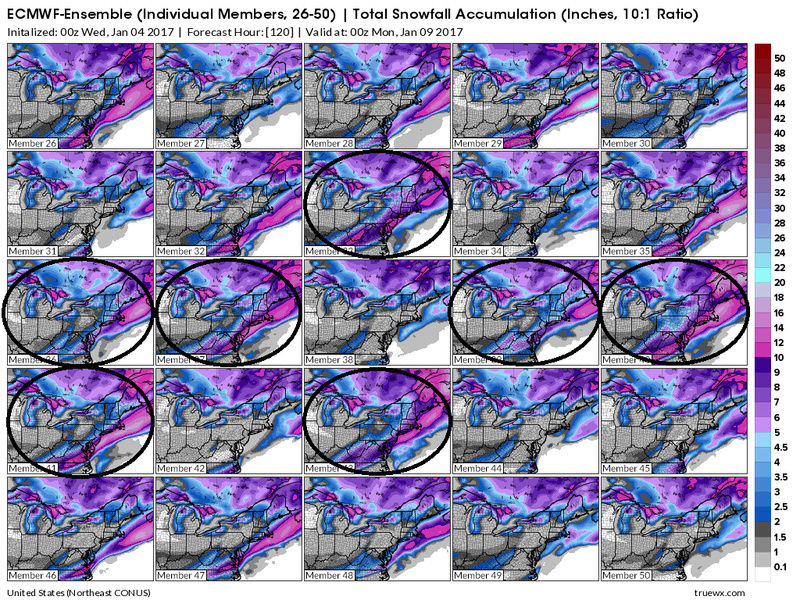 Not sure that matters much or will matter much, but the Euro has been heading in the more aggressive direction consistently at least, whether it's right or not remains to be seen.

I haven't seen anything official from NCEP, but I'd assume this will be ingested into 18z data and beyond?

when was the last time the EURO stood alone from every other model and it turned out the euro was right?