An MCS is going to develop in the Midwest and track east-southeast into the Mid-Atlantic and Northeast area by the middle of the week. MCS stands for Mesoscale Convective System, and is basically a squall line that can travel long distances, bringing severe weather.

An MCS can also be named a Derecho if it fulfills specific characteristics.

I'm not really expecting a Derecho to form, but an MCS does look likely. We'll have to see where it tracks and how models portray it within the next couple of days. Should know much more by Monday.

The GFS and the EURO are at much different solutions right now. The GFS want this MCS event to be a more mid Atlantic event, actually missing us with the precip to the south, while the EURO Is more of a hit for the area. The Difference in the solutions is really at the 500mb level. BY that time it looks as if their will be a +EPO, and a Negative PNA. Meaning that their will be a ridge in the pacific telleconnecting to a trough on the west coast, connecting to a ridge in the central part of the country, and a trough in the east. 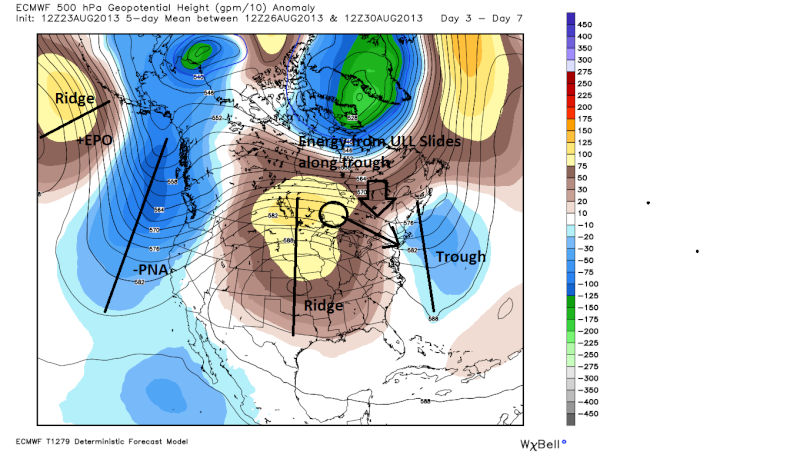 But at the 500mb the EURO and GFS are quite different were they want to set up the ridging in the middle of the country.
The GFS want to develop a much more_PNA thus a sharper trough into the west coast allowing the center of the ridge to be further west. With the sharper trough in the west, the reaction in the east coast to the farther west ridge is a much sharper west and south based trough in the east. 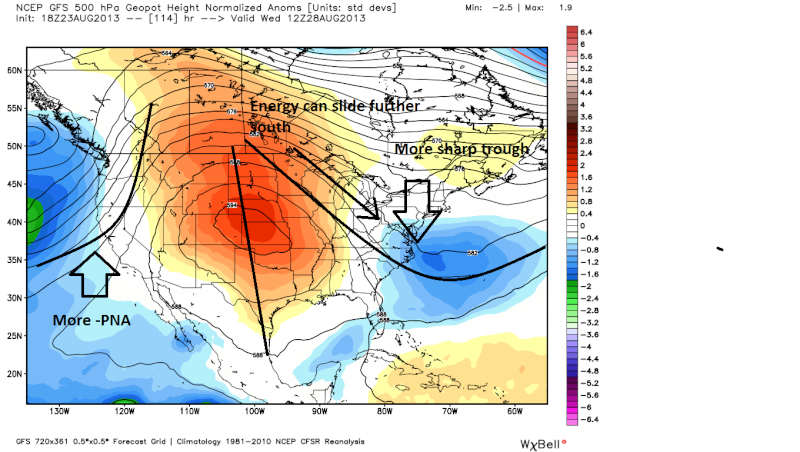 This allows for the energy and precipitation associated with the ULL to dive much further south missing the area. 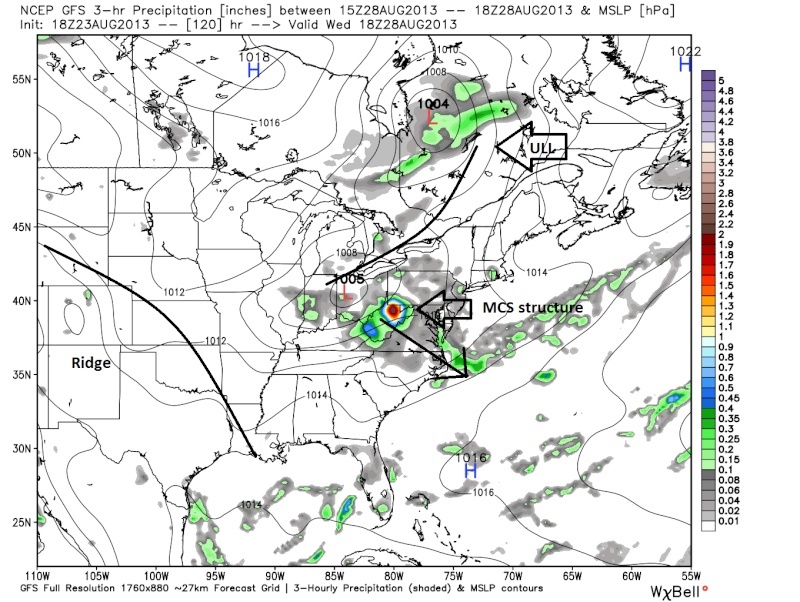 Meanwhile the EURO and its better physics drive, is showing a less amplified -PNA trough in the west coast, allowing a more east based center of the ridging. The only allows for a weaker and more east (offshore, more zonal for our area) based trough , keeping the ULL more to the north, thus the MCS convection to the north also hitting the area. 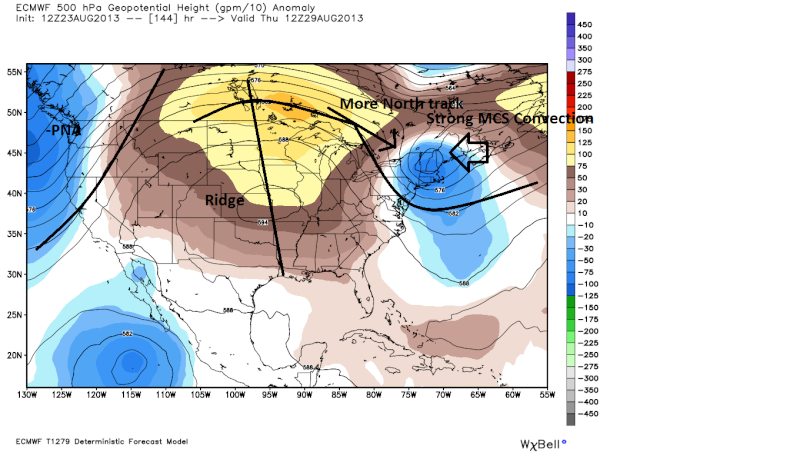 This more northern track puts us in the line of fire 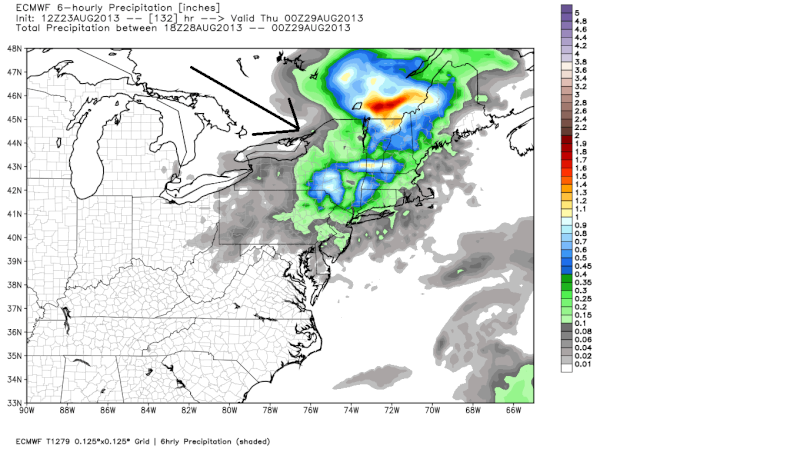 Im betting on the Euro and its more advanced physics drive with this one. But as Frank said, we will have to watch the models because either or could be the solution at this point.

Oh and the GEM is agreeing with the EURO on basically everything, except it has a more amplified trough in the east with a 50-75 mile more southerly track of the ULL hence the bulk of the MCS hitting our area.... 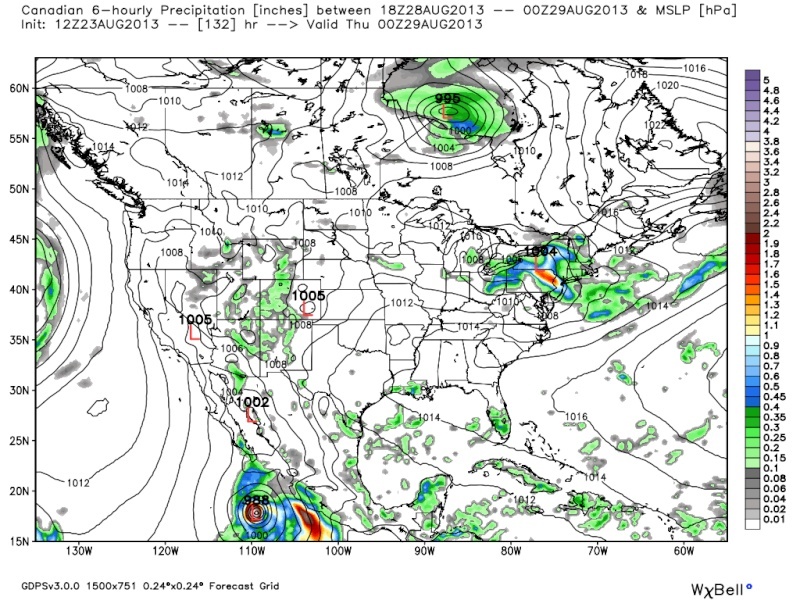 The 12z EURO came south from the 00z with the MCS. The GFS is still really far south. If they meet in the middle...you know what that means...

The 12z EURO came way south with the track, 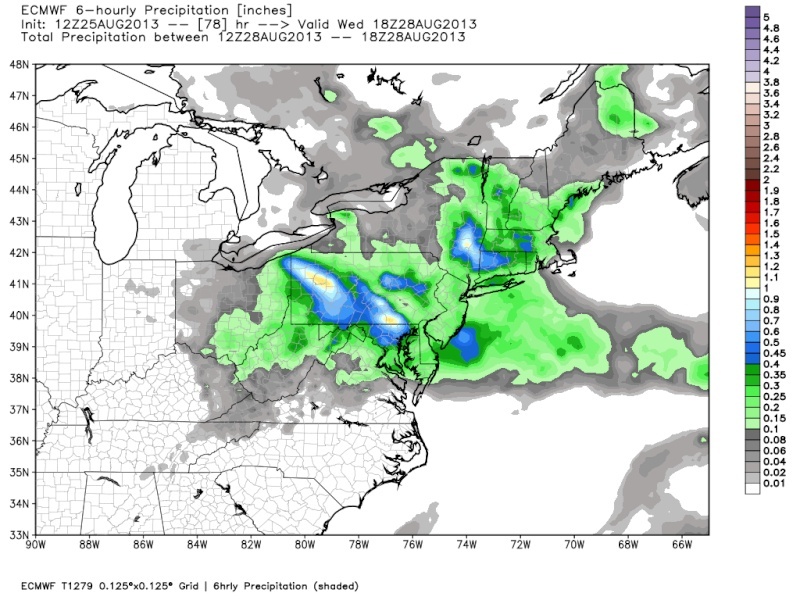 and the 12z GEM is still a hit for the area.
The 12z GFS tracks the convection over the area, but its weak..... and the GFS is still just terrible with these set ups....

This is beginning to look more legit now for our area. Wednesday looks like the day an MCS could effect our area. The potential for damaging winds and heavy rains is possible.

The EURO model passes the heaviest precipitation to our south. Still, this event needs to be watched closely.

How far south? I'm not getting good internet service and relying on posts here...still in Seaside for this week.....

Haha nvm the model map was just slow to load on my phone!

Looks like Atlantic City and on south have the best shot.

00z GFS takes this thing even further south now. It looks like southern NJ and points southward will be the only areas to deal with this event. Our area should remain in the clear. Will continue watching though. This would be for Wednesday.

Morning model runs continue to show this pushing to our south. It looks like we will remain in the clear from this MCS. Washington D.C., maybe even Philly, should keep an eye out early tomorrow morning as this things develops. Could be some nasty straight-line winds.