Temps are going to get into the 50's and 60's again this week until a front comes through on Wednesday. This front is actually important because it will determine where the baroclinic zone sets up Thursday into Friday. A stronger front means a baroclinic zone further south which keeps colder air over our area and sets us up for a wave of low pressure on Friday that could bring us snow. A weaker front keeps the baroclinic zone north, and thus, milder air keep precip on Friday in the form of rain.

The 500mb map valid 7am Friday from the GEFS shows a zonal flow through the CONUS. The anomalous trough in the NPAC is too far west (has been the case all winter) which allows a trough to sneak under it and prevent a western ridge from forming. The PV is found over the Hudson and slowly working its way S&E. So cold air is trying to push down over our area, largely in part to the -NAO over Greenland, despite the unfavorable looking Pacific.

The 500mb energy valid same time period shows the vorticity over our area. Notice how it's fairly strung out, disorganized, and not embedded within any kind if trough. It's a very fast flow, for reasons mentioned above, and the coldest air mass is too our north. Models differ on where this wave tracks. Again, I believe it depends on where your baroclinic zone is found. At this time, I would say a combination of rain and snow is likely on Friday. Which precip type will fall largely depends on track of the surface low. We should have a better idea Wednesday how this wave looks. IF it does remain all snow, the potential is there for 4-8" but that is best-case in my opinion. 2-4/3-6 are common amounts I could see fall. The timing for this wave is late Thursday (maybe 11pm) through Friday mid-day.

This is pretty cool and something that has me a bit excited. The PV I talked about for Wave #1 shifted to the 50/50 Low Region by Saturday mid-day. The -NAO block over Greenland grew stronger and notice how a neutral tilted trough tries to form in the mid-section of the country, allowing heights to rise over the EC.

Here is a look at the 500mb vort valid Sunday morning. Again, it is not a very organized look but much better looking than Wave #1. Some models, such as the EURO, show a suppressed system that impacts just the DC area while the GFS has a coastal storm bringing moderate accumulations. My rule with multiple threats that fall within 24-48 hours of each other is we have to wait for Wave 1 to pass, or at least give models time to process how wave 1 will go which will give them a better idea for Wave 2.

Between both waves, here is the total snowfall map from the 06z GFS. I'll keep an eye on both events and provide updates through the day. There is another snowstorm possible Tuesday March 14th too. In the long range thread I expressed interest in the March 10th-15th period as long as we saw the -NAO block come to fruition and some help from the Pacific. The PAC for Wave 2 and the storm next week looks better and the -NAO should be in place. A lot of magic can happen when the -NAO sets up favorably over Greenland.

isn't tgat the one the euro showed a frankzilla a day or two ago? Might not b off its rocker? Rb posted gefs and wow.

Closer look of wave 1 from GFS

Frank, as usual, EXCELLENT writeup. Regarding the first system, I expect to see this trend favorably for us based on the MJO state, and Northern Hemispheric pattern. It should trend a bit further south and likely end up cold enough to be a predominantly snow event for most. However, as you stated above, the flow is very fast, and with the mid-levels already largely disorganized, it would not surprise me to see this completely shear out and produce little if any actual precipitation for the surface. Adding to this concern is the source region of the flow, which is from the west or even west-northwest; a very moisture starved flow similar to a clipper. I think the EURO Op has the right idea with this one, and think the others will trend toward it with both decreased QPF and a further south track.

The second one, however, is actually getting me pretty excited. I've held off on commenting because with the volatility in the modeling I decided it was best to walk away for a bit. That said, it now looks like the whole pattern is becoming better recognized and woweeeee!! While I am fearful that the MJO ends up staying out of the null-phase and starts touring Phase 4, which is warm, the presence of an extreme -EPO and evolution of a strong -WPO in the Pacific will largely work to offset any ridging that tries to bulge beneath the trough across northeastern North America. The neutral AO state will neither help nor hurt our situation, and the possible pseudo PNA, if realized (EURO Ensembles), should help to promote a deeper eastern trough, thus allowing cold to remain entrenched for our region and a more robust system to develop. Lastly, the NAO region is tricky because of the divergence in the modeling, as the GFS wants to keep it blocked while the EURO starts washing it out. Based on my hunch about the MJO, I will side with the EURO here and say that the NAO blocking should begin to break down. That said, we will still have both the 50/50 low and west-based NAO block over the top, albeit weakening as the storm approaches. That is not a bad thing though, because this winter the WPO/EPO couplet has been, by far, the largest driver to getting cold into our area, and with the extremity of the -EPO and emergence of a strong -WPO during this period, the decrease in strength of the Atlantic blocking may prevent suppression-depression from occurring, and the Carolinas cashing in again while we are left high and dry. Instead, the decline in the Atlantic blocking and anomalous warm SST's offshore should work constructively to allow this system to remain in play for us. The Pacific coupling will prevent the warmth from winning out, while the decline in the Atlantic should prevent an OTS miss. Whether or not it "balls up" or remains more of a wave is dependent upon how the PNA region evolves in my opinion, but I think there is a legitimate shot at seeing measurable snow with the second system, with large potential if the PNA region looks more like the EURO Ensemble, and less like the GFS Ensembles.

Both of u great writeups with some enthused mood in there. I'll take one more big storm. Shoot 3 in a 4 day span fwef if that happens.

frank y in ur snow confidence level do u feel better chance with hfirst wave? 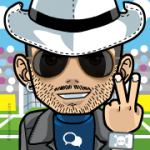 @jake732 wrote:frank y in ur snow confidence level do u feel better chance with hfirst wave?

as frank stated with each event so close one is gping to have a large part on how the others pan out. Plus of course the closest storm is gping to have more confidence than later. Frank feel free to correct me if I am wrong. There is also a lot of volitility in each event.

most exciting week of winter about to get started in march hahaha.....sunday is purim as well

I always get so nervous with these "multiple event" situations. Usually, none pan out to be that impressive cuz they're too close together. I'm scared! I'm worried! Lol I'm very emotional right now!

@SoulSingMG wrote:I always get so nervous with these "multiple event" situations. Usually, none pan out to be that impressive cuz they're too close together. I'm scared! I'm worried! Lol I'm very emotional right now!

Can't b worse than no chances which was whst we were going through.

Great post Frank! Lots of variables and we've been discussing them all, but that blocking evolution is a thing of beauty! Major wave breaking this week that sets it all up.

gfs and cmc nice couple inches with wave 1...gfs wave 2 goes south...i would say were in a pretty good position for now..

Here is the GFS for wave 1:

At this far out juncture I'm not worried about tracks. Don't live and die with individual OP runs... watch for trends with the ensembles. One encouraging sign I'm seeing is wave 2 seems to be trending stronger in time. We just need some fine tuning with the position of the PV. One thing to look out for is if we can see improvements with ridging out west. If we can achieve that, it would buy us enough time for the trough to go negative, then we would have a real monster on our hands. All options are still on the table.

@SoulSingMG wrote:Everyone in DC is rejoicing on Twitter from that last GFS run lol

Some folks never learn. I don't care if tonights runs show 3 feet for NYC. Don't get excited until your inside 72 hours. I've been duped too many times before.


My sentiments for the 10th-15th time frame were and continue to be if the blocking is real, and we get just a little help from the PAC, then we'll have storm events to track. If the Atlantic did not cooperate, as has been the case this winter, then we'll be set-up for disappointment again. Latest guidance suggests we're on our way to seeing at least one measurable snow event, possibly two or even three. Each event has a level of risk associated with it. For instance, winds initially will be from the east-northeast for Friday's event. So a rain/mix to snow unless there's enough mid level cold to combat warm layers that exist at the low levels. Also, if the baroclinic zone is too far south then the track of the surface low will put us in 'fringe' territory.

Saturday evenings event I think holds the greatest potential to seeing a good accumulation. The risk associated with this event is again suppression. However, the trough will try to amplify in the mid-section of the country which should increase heights along the east coast. Cyclogenesis should pull the cold air toward the coast and keep majority of the precip in the form of snow. Also, the -NAO block will be fully established by then and a piece of the PV may try and turn into a 50/50 Low. Overall, I think there is less risk with Wave 2 than there is with Wave 1 but both need to be closely monitored. Anytime spacing between two events is this close models tend to suffer and show drastic run to run variances.