I just came back two days ago from a week long cruise to Bermuda and back. Great trip. I would hate to be out on the high seas with a tropical storm, hurricane, rough weather, or any other thing that would make me seasick. The trip was great. It was smooth sailing.

All quiet on the tropic front. GFS was out to lunch kudos sroc!!

Thanks Jman.  The exact reason why Trop systems must be looked at in 3-5day increments and no further; esp when the system hasnt actually formed yet.  And Ray I have been pondering your questions from a few days ago.

but I would like to pose the following questions for you all to think on, as I already have my own personal views on the subject: Given this season's tendencies for troughing in the eastern CONUS and the incredibly below average SSTs off the Mid-Atlantic and New England coasts, what impacts could those have on the brilliant list of factors mentioned above? Also something to consider, given the MJO projections as stated in coordination with the atmospheric projection of a weakly warm ENSO state basis the SOI, how could those impact the overall development of the system in question?

sroc4 wrote:Thanks Jman.  The exact reason why Trop systems must be looked at in 3-5day increments and no further; esp when the system hasnt actually formed yet.  And Ray I have been pondering your questions from a few days ago.

but I would like to pose the following questions for you all to think on, as I already have my own personal views on the subject: Given this season's tendencies for troughing in the eastern CONUS and the incredibly below average SSTs off the Mid-Atlantic and New England coasts, what impacts could those have on the brilliant list of factors mentioned above? Also something to consider, given the MJO projections as stated in coordination with the atmospheric projection of a weakly warm ENSO state basis the SOI, how could those impact the overall development of the system in question?

Specifically what would happen to a Trop system approaching the EC with the large scale propensity to have troughs come and go into the NE.  My initial reaction would be one that would come down to timing.  With a predominately +NAO I cant imagine anything but transient positively tilted trough orientation such that re curvature being most likely if the trop system was approaching from the east the same time the trough was approaching from the west.  However, if the trop system arrived as the trough was lifting out we would have to watch how strong the ridging builds back in and where the weakness would be making a possible EC hit very likely. Given the way the MJO and SOI projections are looking the "ridge" over troubled waters will have to be watched closely throughout August and Sept.

I agree there is a good chance troughs could push it OTS but if timing is right we or somewhere on the EC could be in trouble. I noted recently the waters up here have been quite cold, that would inhibit any rapid strengthening the further north any system gets, what is the projection for the waters going into Aug, Sept. Oct?

Looks like its going to stay queit till August if LR GFS is correct, but just like it blew up two non existant systems it probably will miss one that DOES develop lol

This will not allow any development off the coast of Africa - the Sahara Dust is WOW!!

jmanley32 wrote:Well don was able to develop and nhc has highlighted a new area
Don is very low and looks to hit skim south america

Ehh.  Recon showed weakening today.  You can clearly see the northern periphery of the system is being sheared on visible satellite.

When looking at lower level winds you can see that they begin to accelerate when you look at the Caribbean between approx. 62*W and 70*W.  This will lead to low level divergence (NOT conducive to convection).

The dry air is intense to its immediate N. and although the LLC of circulation has been relatively protected from it thus far, allowing it to develop in the first place, it appears that some of the dry air and the SAL is mixing in at the mid levels.  This system is likely Don for(see what I did there).  Grenada and some of the other S islands in the chain will experience trop storm conditions, but this system is a big yawn for me. 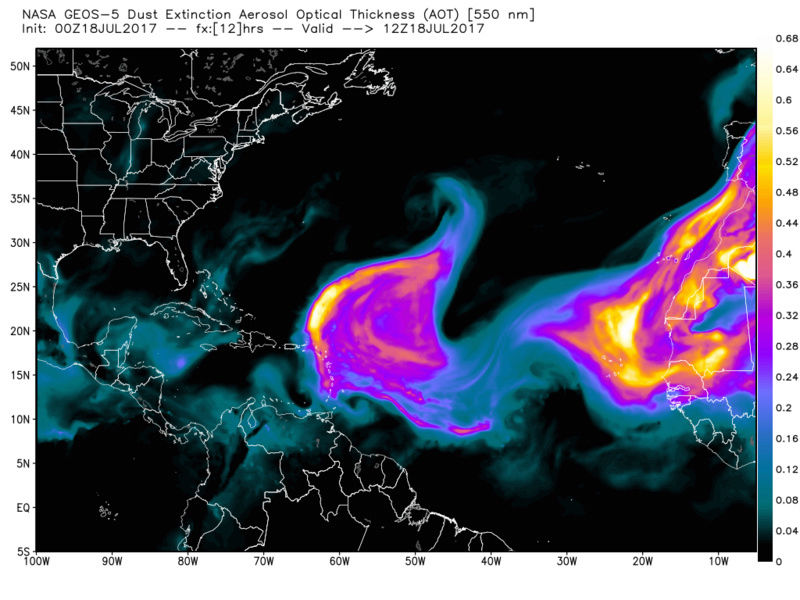 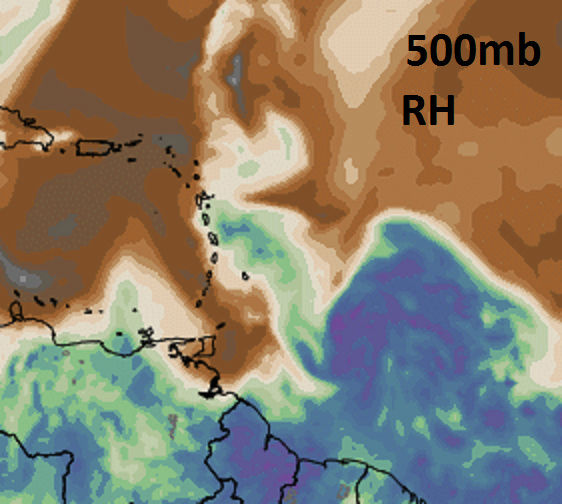 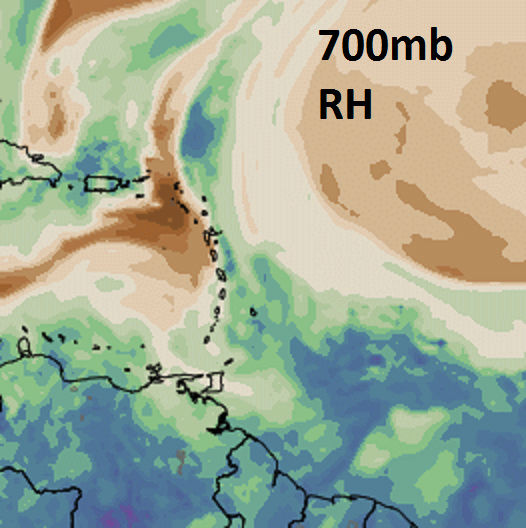 Yep yawn and don for lol

Put a fork in July!!

There is still a very active African wave train.  I would still keep an eye on the wave coming off the coast now, but even more so the one in its wake at around 10*E.  There will be still plenty of SAL to contend with, so development will be difficult, but not impossible given the prolonged positive SOI readings. Plus the SAL is forecast to dissipate some.  Around this time frame the MSLP of the Atlantic HP is forecast to drop to the low 1020's on both GFS and Euro.  I guess there really isnt much time left for any significant impacts to land in July, but I do think that the second wave coming off Africa has a decent chance.  We shall see.

I think mugs is right for July, maybe we have a start to development but nothing that will pose any threat to anywhere till August. Expecting anything is July is not that common anyways and if the higher end predictions are correct Aug, Sept Oct will be one after the other. 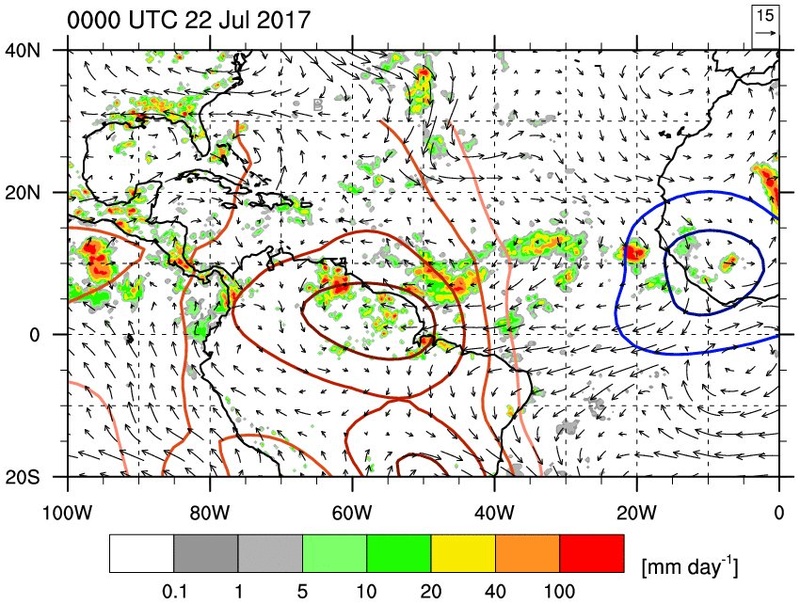 Okay whats up with the pacific being so active and the atlantic not, it was supposed to be the opposite this year. I still get it mixed up el nino or la nina that means active atlantic. But forecast seems to so far be nowhere on track. I need some kinda excitement to track I cannot wait 130 something days for snow storms too long lol, this almost every weekend rain is really getting annoying, though this past weekend was nice for once. And I have given up on svr weather, not one has worked out for this area, not even one thunderstorm this year amazing.

You know what I would love to see for the canadian model? for it to even once get the tropics right before any other model, i mean it spins up a hurricane almost every run somewhere, ud think by now just by chance it would have happened lol

Nice example of Fujiwara effect on 12z GFS in the SE Pac. through 150 hrs

Hcane season going to get going in the nextra 10 to 15 days as we enter into the growth phase of this season. A kevin wave which is passing through put the kabosh on this for s few weeks since Don, if you can call that a trop cyclone but it met the min characteristics. Anyway once the wave passes the African cont it will allow the AFrickin waves to develop as the are in the MDR region. Shear should be low since the waves usually reduce shear and African dust is projected to be low. Lastly we have a big BH and a trough centered over the Central US which should help steer these towards the GOM and the East Coast. Primarily SE coast. I think we can see 3 -4 trop cyclones develop in this time frame. Where they go and what to what level they develop to is anyone's guess but interesting times coming these second and third weeks of August.
_________________
Mugs
AKA:King: Snow Weenie
Self Proclaimed
WINTER 2014-15 : 55.12" +.02 for 6 coatings (avg. 35")
WINTER 2015-16 Total - 29.8" (Avg 35")
WINTER 2016-17 : 39.5" so far

From JB three trop cyclones on tjis project ti on from the AFrickin coast to the SE that turn Red is impressI've from the EURO EPS. Looks like 2nd week of August it may get interesting down there and the carribean. If you have plans BUY INSURANCE! !! 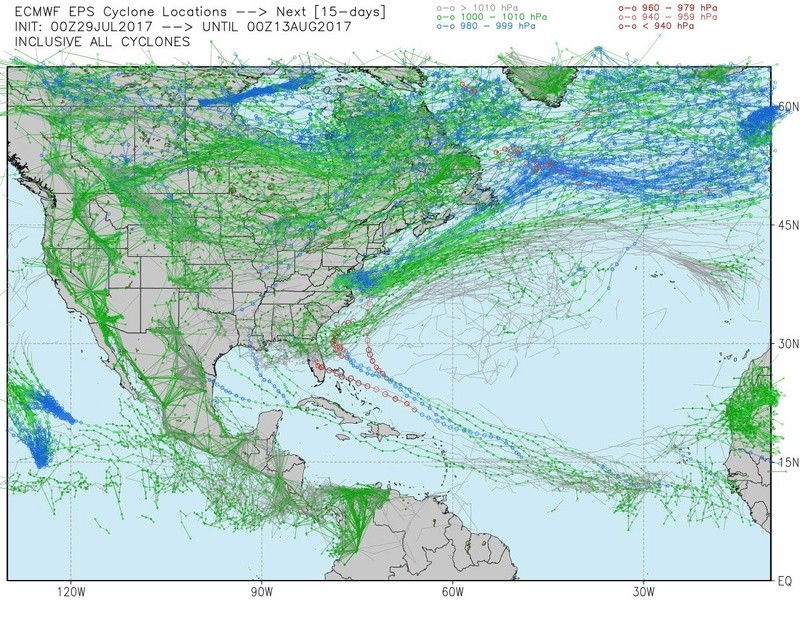 EPS has an interesting signal for Day 7 and beyond with a highly anomalous trough parked over the east-central region of the U.S. and a pretty well-defined weakness in the 500 hPa height field traversing westward through the Bahamas, likely indicative of a tropical entitity as mentioned above. Don't have time for any analysis, but maybe others can elaborate in my stead.

There is a new area at pandhandle of FL, thats progged to move into western atlantic by east coast, looks by models to not really develop and move OTS from there.

Well that system jumped from a 20%chance to ts Emily this morning guess the gom is conducive. Ts warnings up for Tampa North and south. Looks to maintain ts status all week up to Carolinas. Doesn't look like this has any steering to keep it close to the us as it goes ots.