All eyes are on Hurricane Irma as she slowly jogs west toward the Lesser Antilles. Question is does she pass through the Lesser Antilles into the Caribbean Sea (southern track likely heading toward GOM), or does she go north of there heading directly to the Southeast/Northeast U.S. coastlines. If she takes the latter track it means she can also re-curve out to sea. Essentially we're looking at 3 possible tracks.

Today's EURO slowed the storm down to a point that it missed the cut-off trough located over the eastern U.S. However, the WAR (West Atlantic Ridge) was able to build again and keep Irma on a west-southwest trajectory and likely show landfall near the Carolina's. I think the key trend today is the storm is slowing down which means it may mess the mid-level trough that tries to capture it and pull it toward the coast. But because there is a block, it does not make it an automatic that Irma will slide out to sea.

I do not have much to add at this point. I am refraining from providing too much analysis simply because there is no consensus with operationals or ensembles. Plus, if the trend to slow Irma down is true then we're back in a 10-15 Day time frame. So...enjoy your holiday weekend and come back Tuesday to see where we're at

Here is a discussion from the NHC on Irma.

Irma is undergoing an eyewall replacement cycle. The small eye is
becoming less distinct, with both microwave and visible imagery
indicating the presence of a forming outer eyewall. Satellite
intensity estimates are lower, so the initial wind speed is reduced
to 95 kt. Some further weakening is possible over the next day or
so while Irma moves over marginally warm SSTs and continues the
eyewall replacement. After that time, the environment should be
generally conducive for some restrengthening, although forecasting
the timing of eyewall replacement cycles is next to impossible. The
biggest change from yesterday are the long-term wind shear
predictions from the global models, which shows a little more shear.
Still, the shear is not that strong, and the hurricane will be
moving over 29C SSTs. Thus, the NHC intensity forecast is reduced
somewhat from the previous one, but remains near or slightly above
the model consensus.

Irma has turned a little bit to the left, now estimated to be
moving 285/11. The general synoptic situation remains well
established due to a building mid-level high, which should cause
the hurricane to turn westward later today and then move
west-southwestward through the weekend. An upper-level low will be
dropping southward on the east side of that high, and should be a
key feature to how far south Irma goes before eventually turning
westward and west-northwestward early next week. There is a
noticeable clustering of guidance by day 5, with the ECMWF, HWRF and
corrected-consensus models to the south, and the UKMET, GFS, CTC and
HMON to the north. Since Irma is forecast to be a vertically deep
cyclone, it seems more likely to respond to the northerly flow from
the upper-level low, which leads me to believe the track will be on
the southern side of the guidance. Thus, the forecast will stay
similar to the previous one, very close to the southern cluster
mentioned above.

Irma weakened today but it looks like another eye is forming

I saw her earlier, was def regaining, imagine when shes a cat 4 or 5, what she will look like dayumm.

Frank, that was clever ahahaha i seent what you did there

Is their still something behind Irma that could hit the consus? 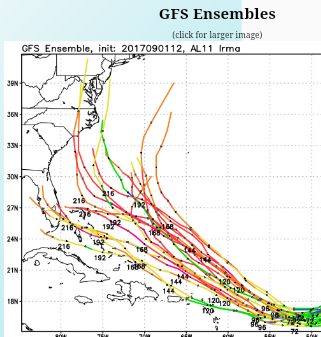 5pm advisory should be interesting. She looks like she really strengthened today.

A lot of members of the 12Z EURO ensemble take Irma out to sea. Wouldn't shock me if more members go out to sea in future runs. Without question, it has trended northeast.

Good pt. Frank. There's not even a guess if the block would b strong enough? I mean a cat 4 or 5 couldn't that pretty much plow anything? And that's assuming the slowdown actually happens. Alot possibilities on table go b a long ways.

aiannone wrote:5pm advisory should be interesting. She looks like she really strengthened today.

she's gotta bba major again imo. When will it be close enough for recon? Once we get that data a lot could change. 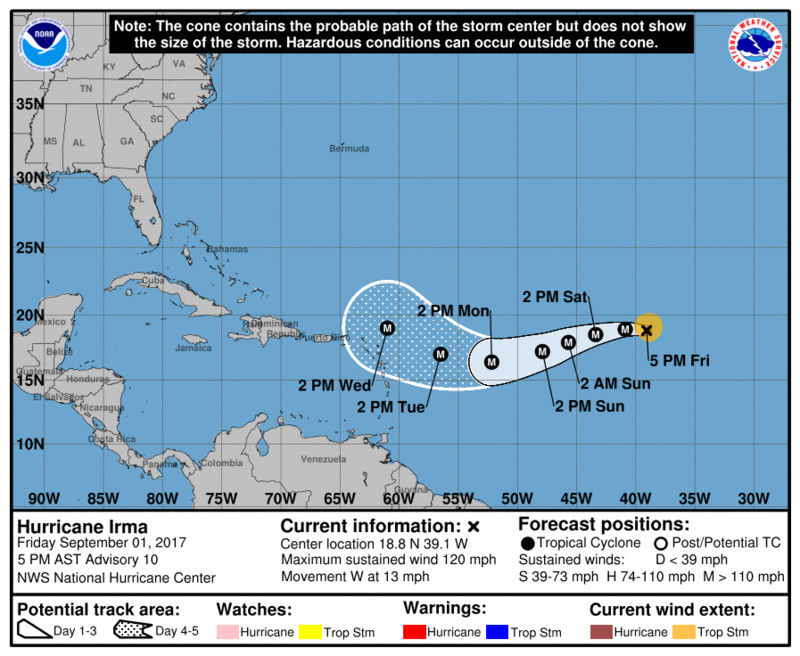 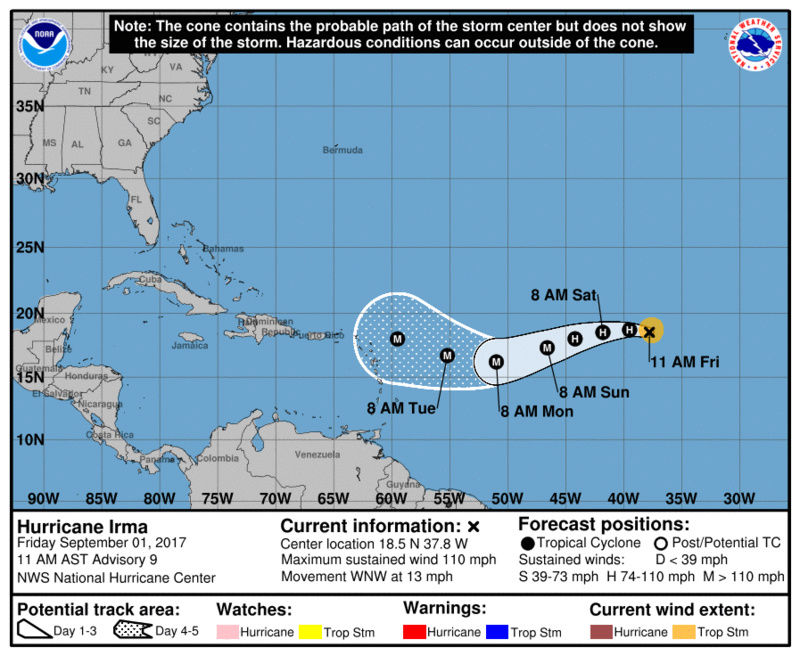 Little shift north with the track

That is EXACTLY the question I was beginning to ponder myself, Skins. 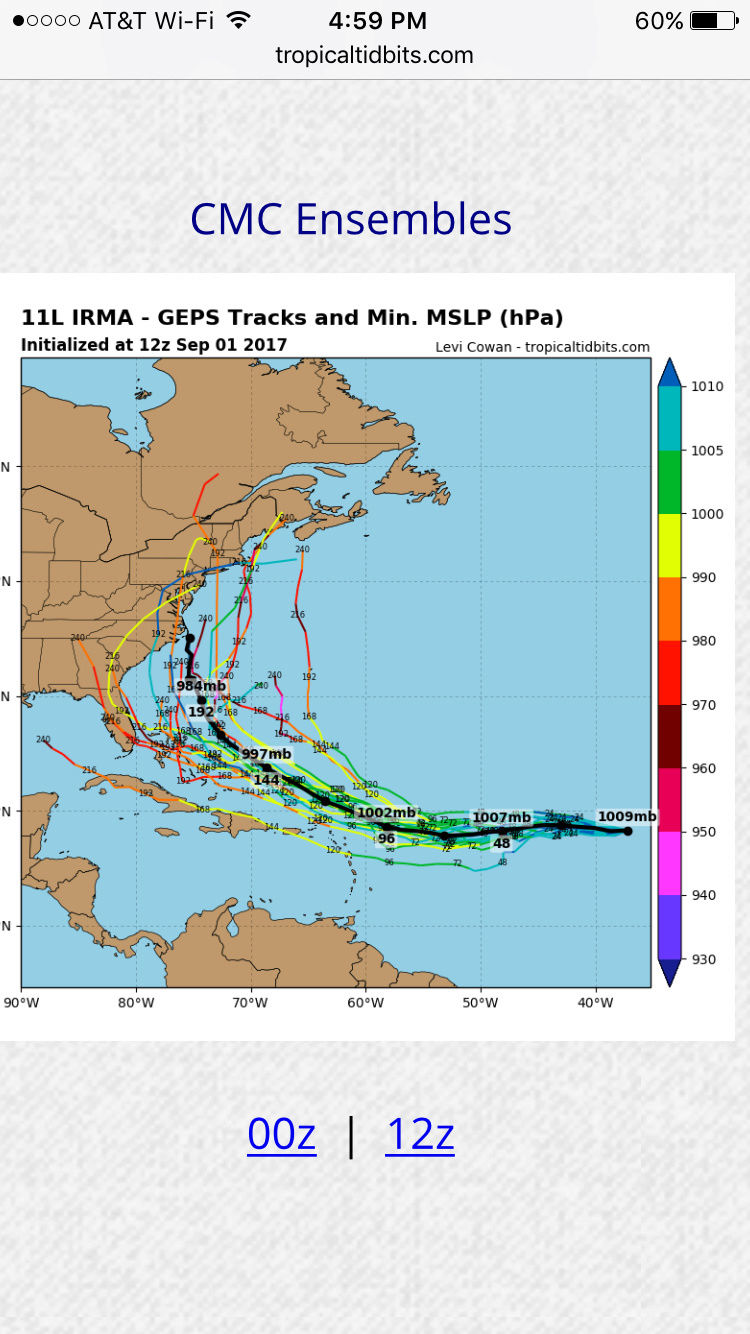 Math what is the basis or tjis assumption. We have a recurve g typhoon thatbis going to be a major player here and effect he whole.downstream H5 and total atmospjere. The wsterlies are way North and from all guidance and and maps show tjis so they will have little effect on her. It will be basically the trough and ridge.  If you get a bridged block over the top if your WAR builds west and then she gets trapped basically underneath. Lots of time and Steve D talks about this major concern. Unlike Matthew last year as some have referred to this is not nearly the same set up with a trough hanging over the east.
_________________
Mugs
AKA:King: Snow Weenie
Self Proclaimed
WINTER 2014-15 : 55.12" +.02 for 6 coatings (avg. 35")
WINTER 2015-16 Total - 29.8" (Avg 35")
WINTER 2016-17 : 39.5" so far

Jeez. Some of these long range tracks (albeit a shot in the dark at this point) paint a very dire scenario for these parts of they were to come to fruition.

Well that was short lived weakening now almost cat 4. Cmc ensembles wow yikes a lot of heavy hitters even up here. Are euro out yet?