LOL, i should be studying, but ehh this is more important and more interesting than accounting lol

I’m thinking as far as Long Island goes this is a classic north shore special. Hempstead turnpike north should do well. South shore near the still 50 degree ocean maybe some BL issues. Down there a 2-4” slopfest. Up here 4-6” kind of deal. Basically draw a line from Riverhead to Kennedy Airport and that’s your dividing line. We have a special micro-climate out here especially on early winter storms. Thoughts?

GFS at hr 36 is closer to the coast near OBX.

0z GFS is further west and has a bigger precip shield

all models so far on 00z are on board for a advisory level to warning level snow depending, what a flip.

Track, Skins, anyone else on the Coast:

Good news out of Mt Holly in their 9 pm update!

.LONG TERM /FRIDAY NIGHT THROUGH THURSDAY/...
900 PM...Updated temperature, PoPs and weather grids for the
Friday night-Saturday event. Will hold off on making changes
the snowfall accumulations until the mid shift gets a complete
look at the 00Z guidance that comes in later tonight.

The biggest difference with the evening update was to increase
PoPs late Friday night and Saturday (most notably from the I-95
corridor/Delaware Valley, south/east) with increasing NWP
support for the occurrence of measurable precip across this part
of the forecast area.

The precipitation type should be snow for the bulk of the
event. The exception will be coastal locales near the
ocean/Delaware Bay where mixing will play a factor in limiting
snowfall accumulations (evident in probability of frozen
precipitation fields for the last several runs of NAM/NAM nest).

Yes, models have trended westward/wetter over the since last
night with 12Z/18Z model consensus painting one-half to one-inch
of QPF for areas just to the east of I-95. However, a steadfast
10:1 snow ratio should not be valid in the coastal plain given
a marginally warm surface and the potential for considerable
riming to take place (more likely between 5:1 and 8:1 in the
coastal plain for this event).

Further west than the 12z run

Ukie has about 6 + inches of snow for o NYC area

The track is great for the NYC area

...WINTER WEATHER ADVISORY REMAINS IN EFFECT FROM 6 AM SATURDAY
TO 1 AM EST SUNDAY...

06z suites back west/more expansive with the precipitation shield 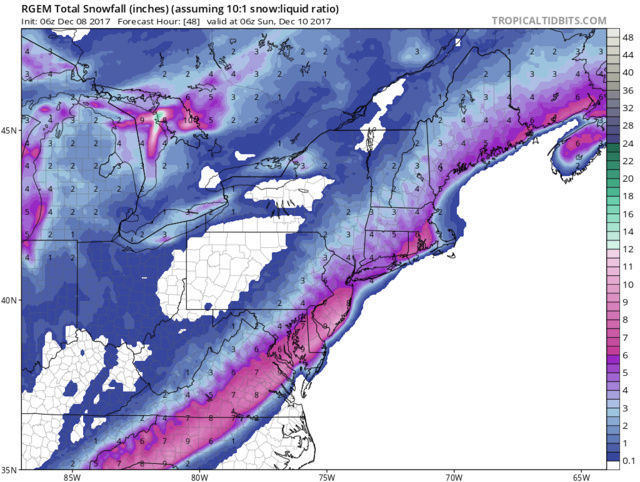 you think the winter weather advisory could be upgraded? Seems ecven operational gfs was near 6+. What a nice surprise all this is! Even a wwa is better than we have seen in Dec in a while.

Jman I know they gave us down here a watch. Sure you guys will follow

Yeah it may actually be that you guys get more being you sick out a bit more I'm bit further west. But 06z gefs was .75 to 1.0 plus qpf holy smokes is right rb! It all seems to still be expanding west. Big 12z and 00z runs today!

AND THE GEFS JU ST JUMPED 40 MILES WEST MOTHER OF LOVE!! Would be warning for level storm!!

Great discussion from Upton this morning:

Confidence has continued to increase regarding our first
accumulating snowfall event across the Tri-State Saturday into
Saturday evening. Dprog/Dt trends in the models over the last 24
hours or so are quite impressive with increased amplification of the
upper jet over the northeast/New England as well as with the overall
amplification of the middle and upper level trough across the
eastern States. These trends are going to lead to an organizing low
pressure system over the southeast States tonight that will
gradually strengthen as it moves up the coast on Saturday south and
east of Long Island. Initially the low develops from southern
stream energy across the southeast, but another piece of energy
in the northern stream will help amplify the middle/upper trough
and thus intensity the low as it passes near or just to the
east of the 40N/70W benchmark. The low quickly lifts off the New
England coast Saturday night as the upper trough slides
overhead.

Models have come into much better agreement with the expanse of the
precipitation shield as well as the overall timing.
Increasing lift begins late tonight as the upper jet amplifies to
speeds close to 200 kt across New England. The region will lie near
the right entrance region of this upper jet core bringing large
scale lift and eventually precipitation. The lower levels initially
are going to be dry, so evaporative cooling will have to take place
to get precip to the surface. Temperature profiles are
supportive of all snow at the onset early Saturday morning.
There remains some uncertainty on how quickly the lower levels
saturate, but should see light snow overspread the region from
south to north around or just after sunrise Saturday.

Accumulating snow is expected to continue for much of the day as the
upper jet provides excellent lift in combination with some weak
thermal forcing as the low passes to the south and east of Long
Island in the afternoon and evening. The main concern regarding
temperatures is with the surface layer. While there is no arctic
high pressure to the north, the air is sufficiently dry at the
start to allow the lower levels to cool. As some warmer aloft
advects northward, temperatures aloft will warm slightly but
should stay below 0C. The only concern for any warm nose at this
type would be across the east end of Long Island, where some
models indicate the 0C line at 850 inching close for a few hours
in the afternoon/evening. Some locations may see temperatures
rise just above freezing in the afternoon, but this should not
impact PTYPE except for the Forks of Long Island where
temperatures could reach the middle 30s. Some rain could mix in
there. The snow gradually tapers off from west to east this
evening. Forecast soundings show some drying aloft which may
switch snow growth to less dendrites and more needles, limiting
snow accumulation.

A winter weather advisory has been issued for all zones except
Orange County. Total snowfall accumulations range from 1 to 3 inches
across Orange County, 2 to 4 inches for the rest of the Lower Hudson
Valley, NE NJ, and Manhattan, Bronx, and Staten Island. For
Queens, Brooklyn, Long Island, and southern Connecticut, totals
range from from 4 to 6 inches.

is that nearly 6-12 for most? and the mean that means some ensembles were actually higher? but how many compared to how many lower. still this is all getting me fired up for winter for sure.

Does anyone have first predictions for central New Jersey coast totals

wunderground and AccuWeather have me in a coating to an inch.