skinsfan1177 wrote:I still have hope in this system. We are days away anything can change. Hoping for positive trends today

I am NOT giving up hope on this system AT ALL. I feel strongly that we, or at least some of us, will end up seeing an accumulating snowfall from this system. As you stated below, the northern stream energy will not be well-sampled until late-week, and if my memory serves me correctly, modeling tends to significantly under-represent the strength and speed of energy in setups where the PV is displaced so far south and the energy is truly coming directly from the Arctic. I could be wrong, but pattern recognition argues for an East Coast storm, and with guidance a mere 50 miles too far east right now, I see no reason to abandon my ship.....yet lol

You might want to prepare the lifeboat if 12Z GFS is accurate.

dont remeber seeing the gfs and cmc in such agreement!

MattyICE wrote:Thanks, Frank.  I have a question, for you, or anyone else.  Completely understand that we have energy that is strung out and there's not enough consolidation or wave spacing.  Is there any sort of teleconnection or other indicator that we should keep an eye on that sort of predicts WHEN energy consolidates itself better?  I suspect the answer is no, and that it can happen organically as the pattern settles?  No rush...thanks!

My answer to this question would be that you have to cont to watch all the teleconnections but interpret them with a grain of salt always.  In theory we have some great teles on our side now, but even though high lat blocking lines up we still need the ingredients to come together in the right way.  That said I think to actually answer your question in the current set up over the next 2-3weeks the NAO would be the tele to watch.  With a -NAO combined with all the other teles that look to remain persistently favorable (-EPO/-AO/+PNA) that would increase the probabilities of the energy in the N branch and S branch from coming together better and more frequently.

Right now the latest trends have been to see heights lowering in the NAO region, (N Atlantic and Greenland) aka a +NAO) .  "Usually" a negative NAO, esp west based(extending into Greenland), slows down the flow such that it is much easier for a digging s/w into the central CONUS out of canada to phase with any energy in the STJ tilting the trough neg along the EC leading to better/deeper cyclogenesis nearer the coast.  The question before us now is does the flow off the EC remain too progressive due to the NAO region going neutral to positive, in which case the timing of the N and S energy needs to be just right.  With a neg NAO it slows the flow down off the coast such that S energy moves west to east much slower, drags its heals if you will, giving more time for the N energy to catch up and interact.  In the flow is too progressive off the coast then the S energy moves faster , so if the N energy isn't there in the right spot to capture/phase with it at that moment....poof its gone and you get weak waves of LP and strung out precip shields like we have been seeing in the modeling.

NAO is currently negative but going to go positive.  Historically some of the best storms occur during such a transition.  Skins made a great point above...sampling of some of the key players wont be great until at least wed-Thursday eve so still time for trends for better OR worse.  NAM was very different in the handing of the N and S energy compared to the GFS and Euro

Look at the difference in how consolidated and the positioning of the N and s eNERGY, AND PAY PARTICULAR ATTENTION TO THE 546 LINE AND 552 LINE.   (Sorry for the caps)  Notice how the NAM is raising heights out ahead of the S energy.  This indicates a slower mean flow in the STJ.  Notice just how far S the 552 line is on the NAM.  This is because the energy is more focused in the base of the trough here which again aids in raising heights out ahead.   Also notice the N energy is further S digging in and and about to interact with the S branch.  Verbatim if this run were to cont this would likely show a MUCH stronger surface LP compared to the GFS when it reaches the coastline.  Vs the GFS which has both S and N branches as one full lat positively tilted trough that has an extremely progressive flow off the coast; therefore, the S energy is all strung out which doesn't allow heights to raise out in front.  Fast flow.  The GFS is known for its progressive bias but I wouldn't discount it at this stage.  Bottom line most likely the coast has the best chance at seeing something measurable with decreasing odds the further away from the I-95 coastal plain you go with this system unless we see trends in the GFS/Euro closer to what the NAM showed today.  IMO the fast flow off the coast will win out, so right now my bet is against anything significant for most if not all, but until wed-Thursday it aint ova. 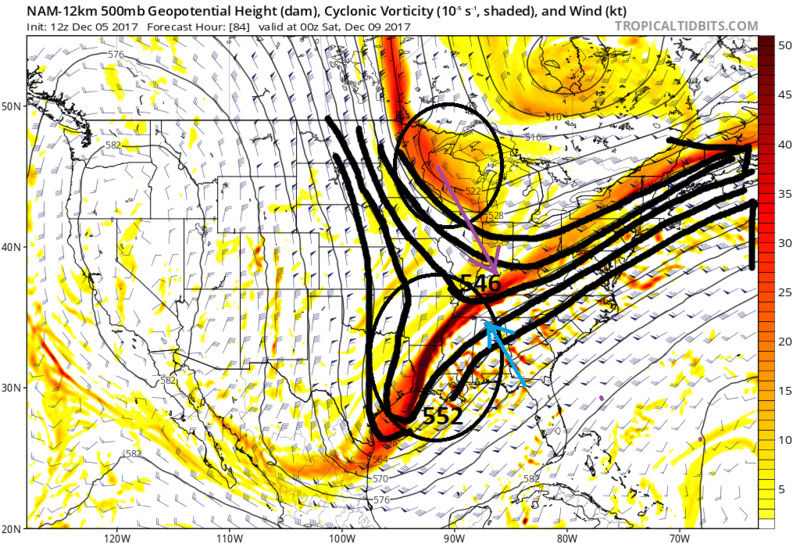 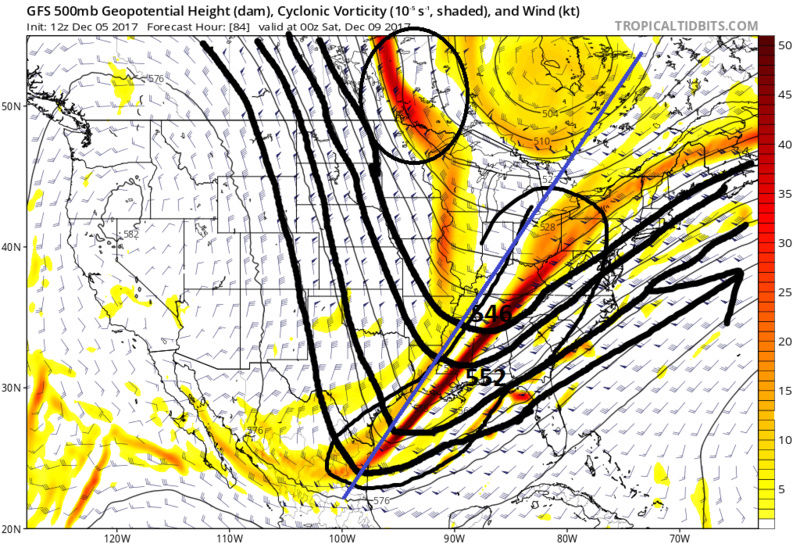 Globals might say no to this weekend but a definite maybe to next week.

@Rb it is a minute shift and the question is who is handling the H5 set up best.
I am not totally discounting the GFS but neither am I the NAM but the GEFS are a bit further west in some members so that to me gives caution for this and the energy is not a good sampling area until Thursday afternoon/night so it wont be fully digested into models until this time IMO.

Anyone have good links for euro Precip?

Or let me ask another question, does anyone recommend purchasing stormvista?

GEFS MEAN PRECIP - I'll take it and run!!
This is what I meant in my above post

Friday-Sat is 1-3" east of NYC verbatim.

In response to one of sRoc4 posts above somewhere about the NAO going positive...........I thought reading the LR the last few weeks many of you were excited that it would be negative for most of December? Have things changed already in that regards? If so not good!,

NAM jet struture. It is west which means IF correct this storm would come more west and the precipitation field would expand west as well

amugs wrote:NAM jet struture. It is west which means IF correct this storm would come more west and the precipitation field would expand west as well

The NAM, if extrapolated, would likely be a MECS/Godzilla for the I-95 corridor IMHO. Just saying lol

December 5: The GFS 10:1 snowfall product is currently affected by a data bug at NCEP, usually beyond Day 5. The snow depth change product is unaffected.

"Thu into Fri look quiet, with a weak W-E oriented ridge extending
from the OH Valley to the Mid Atlantic states. Then a complicated
scenario shapes up for late week into the weekend, as an upper
trough amplifies to the west, with potential for phasing of multiple
branches of the upper jet stream as low pressure passes off to the
SE. A combo of the operational GFS/ECMWF (with support from the GEFS
mean) suggests the trough should amplify enough to bring the core of
an associated SW-NE oriented upper jet streak as far west as NYC,
with fairly good chances for some snow east of there across Long
Island and southern CT with H8 temps below 0C and H8-10 thicknesses
below 1290 m. Latest ECMWF shows the core of the upper jet a little
farther west, across northern NJ. So have forecast high chance PoP
from NYC eastward, with most precip in the form of snow as temps
drop close to wet-bulb temps AOB 0C with onset of precip.

All that said, global models often have a SE bias with low tracks in
this scenario, and it would only take a 50-60 mile westward shift to
bring more significant snowfall amounts to the coast, so this
scenario will have to be watched closely. Shortwaves dropping into
the western extent of the longer wave trough across the Mississippi
Valley may help determine the eventual outcome--since they are
dropping southward into the base of the trough, they would be more
likely to reinforce or amplify, rather than kick the offshore low
farther out to sea."

frank 638 wrote:I hate to ask but what does that mean is that good news or bad news

Hopefully under done but probably over

Skins but what does that mean snow wise will it all be snow or will there be rain. Are we looking at 2 inches or like 4 not trying to be a pain just clueless with winter weather. I find tropical systems so much easier

Both are great and the models come out very fast

Both are great and the models come out very fast

I work for the guy who does IT support for True Weather... Does that count?