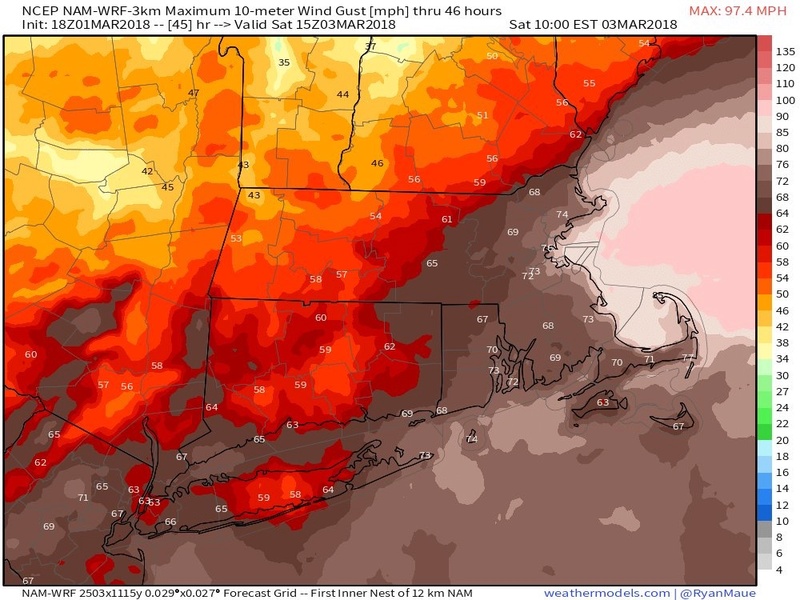 the 3 km nam has hours and hours of gusts even inlsnd 60 to 75 mph holy crap!! How do I see 4 inches and long island 14 that doesn't make any sense.

I am supposed to travel from NYC to Philadelphia early Saturday morning. Should I plan on travel issues?

Boy this is a weird storm for me I have a winter weather advisory and about 5 miles east its a warning! But 3-8 not bad and just of to my East they are saying it could be a foot. 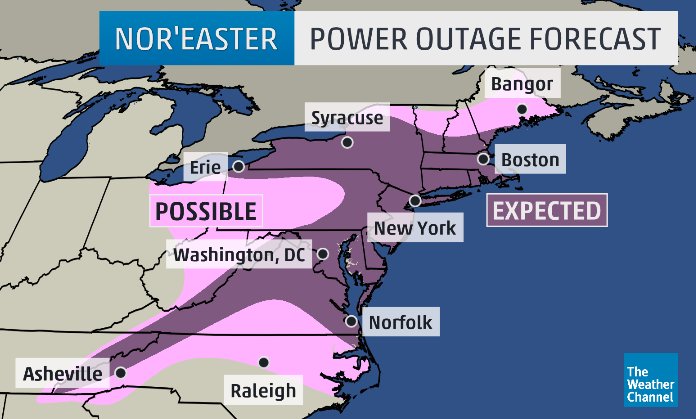 I really like Jman, he seems like a good, honest, genuine, likable person, but if this happens I say we tar and feather him.

@jimv45 wrote:Boy this is a weird storm for me I have a winter weather advisory and about 5 miles east its a warning! But 3-8 not bad and just of to my East they are saying it could be a foot.

I'm surprised it's to your east since the western areas appear to do better. Is it becuase of elevation to your east?

All of you are welcome to come to Syosset. If it snows a foot which it won’t because it’s going to rain, I will have my wood burning stove cranking and tons of booze

No I mean its just to my east just crossing the Taconic state parkway I don't think it has more elevation then me. But its pretty much the same forecast.

syosnow94 wrote:All of you are welcome to come to Syosset. If it snows a foot which it won’t because it’s going to rain, I will have my wood burning stove cranking and tons of booze

congrats this is ur storm your also go see near hurricane winds heavy wet snow see ya lights!! Lol just messing with ya

Great discussion they are finally catching on but humping the GFS still which absolutely sucks at BL temps, had 41/34 split for details ato this hour and it is 33/31 with a blizzard like conditions

Once again, model consensus on the track of a major coastal low
is in good agreement. Strong differences though continue within
the boundary layer of the global and high resolution models,
such that precipitation type and amount of momentum transfer of
high winds varies considerably. The NAM WRF continues to have a
cold boundary layer with the potential for significant wet
snowfall accumulations even down to the coast. However, the GFS,
ECMWF and some of the high res models mainly confine snow to
the higher elevations. There is no source of low-level cold air
and the atmosphere itself from strong forcing will be the primary
source. During this event, it is quite likely that as the
intensity of the precipitation varies, so will the precipitation
type. The main emphasis will be across elevations above 800
feet across the interior, where warning level snows are likely.
Down in the valley locations of interior NE NJ, SW CT, and the
Lower Hudson Valley there could be advisory level snows. Thus, a
Winter Storm Warning has been issued for Orange County, with
advisories for Putnam, Western Passaic, and Northern Fairfield.

The cooling of the vertical column looks to be most pronounced
during the late morning and afternoon hours Friday as the
offshore low occludes and the influx of warmer air aloft from
the Atlantic shuts off. A snow and rain mix will likely even get
to the coast by mid to late afternoon with the possible
exception of far eastern Long Island and southeast Connecticut.
Keep in mind, there is the potential for several inches of wet
snow accumulation at the coast should some of the cold solutions
come to fruition in conjunction with heavy banded precipitation." -Upto
_________________
Mugs
AKA:King: Snow Weenie
Self Proclaimed
WINTER 2014-15 : 55.12" +.02 for 6 coatings (avg. 35")
WINTER 2015-16 Total - 29.8" (Avg 35")
WINTER 2016-17 : 39.5" so far

Do you guys realize that with even 1 to 3 this will be a serious situation with trees downing everywhere. This snow is going to weigh down trees immrnsly add in 50 to 70 moh winds and this could be one for records in many different ways.

Are they in the garage again IN Denver with tat ma for West Milfird and those elevasions with a n Upper Level LP at 980' and deepening? West Milfirdd will be in the foot range in dem  hills. Living in this region for 48 years they will crush it. Oh and ps all those schools will be cancelling manna in NW Passaic, Sussex , Morris and Warren counties.

mugs what u thinking for southern Westchester. Me and soul Al etc? And does the 3km nam winds really have merit that extreme? As soul posted.

Okay I am officially home from work. Just cracked my first beer, have a bottle of Irish Whiskey at the ready. LETS DO THIS.

First few raindrops starting here in Hopatcong NJ. Also had a very strong gust of wind when I got out of my car-- caught me off guard this early on. It was pretty ominous. No birds chirping up here now....

Dave Curren on News 12 says he believes Sussex will qualify for a Blizzard warning based on what he sees. We are currently under a WSW. What say you all? Will those strong winds make it all the way out here to Western NJ?

Any one heard from Skins?

He just posted a page or so ago.

I am whining.  Call me out on it.  Damn.  Western Passaic supposed to get warning criteria.  Me out in Eastern Passaic - nothing.  Disgusting.  So close.. again.....

However, generator is working.

And good luck to all for snow. Hope somebody gets max amounts!!

He just posted a page or so ago.

oops....thanks I must have missed it..I read quickly...tx went back and looked....yes on the previous page...I am worried about beach erosion.

55* with light sprinkles of rain just starting. History will record this is how it began here. How it transpires and ends, we will only know tomorrow night. Also I just finished a "Turkey meets Bacon" panini for dinner. That has nothing to do with the storm but it was very good so thought I'd share.

Grselig- I am still going for 6 to 10 for you. Be patient when the rain changes to snow in a short period of time. Once the axis of the 500 mb low crosses the coast, you will change to snow by 10 or 11 am. The winds will pick up and the snow will be pasted to the sides of buildings with Blizzard like conditions. Hang in there.

I have just been super busy of late I was trying to catch up. Beaches are going to get the brunt plus its a full moon. I was wondering if anyone has ideas on when changeover occurs and when do the winds start to crank

We haven't had one since the midday hours of Monday, March 13th last year when most of us (myself included) were at work.