Frank_Wx wrote:A challenge with snow maps is the algorithms may take into account sleet and frozen rain in their snow calculation, while some snow maps are good at just picking out what falls as snow. That's why it is important to understand boundary temps and other factors rather than trusting snow maps off-hand.

I maintain that coastal sections - Jersey Shore, NE NJ, NYC, and LI - will see 1" or less while those west or north of there see 1-3" with some places seeing well more. I may post a snow map late tomorrow to better outline my thoughts.

Here is an example. This mornings 6z NAM snow map:

In the surface temp map the purple dotted line represents the 32 degree line. Look closely because it is hard to see. Then every red line S&E (or blue line N&W) you add (subtract) 2 degrees. Because it is November and it gets dark early, I don't put a lot of weight on these maps. But eastern Long Island and the Jersey Shore, where it shows 34 degrees, the snow may not stick on paved roads. For everyone else, the NAM shows sticking snow at 1pm. 850mb temps are plenty cold.

Now here are all these maps again but at 4pm Thursday

850mb temps are still cold to support snowfall. Surface temps did not really move either. You can see the High Pressure off the coast of Maine rallying to keep the cold in place. Parts of western NJ begin to see some mixing issues, however.

Then by 7pm there is just a small area where NYC still has 850mb temps below freezing, but many are changing to a mix. However, this is also the tail end of the storm. So really it is 6 hours of snow then maybe 1-2 hours of mix. N&W of NYC remains snow the entire time on the NAM.

If we make the assumption the NAM is correct with its thermal profiles then this looks like a widespread 3 to 6 inch snow event for our area. It looks like models are trending colder.

Meanwhile, the 6z RGEM and 0z EURO call BS on the NAM with its depictions of the temps. These models have little to no snow for coastal sections.

Sounds good frank any snow at this time of year I just see as a unexpected bonus. I stay snow almost entire time. Maybe make up for all the times I got screwed last winter spring.

bobjohnsonforthehall wrote:Those maps have to be including other ptypes. It just won't be cold enough long enough for that kind of snow to take place.

8” IMBY on the coast one week after Sandy

I get that. Just with this storm I don't see the cold winning out for as long as it would take to maintain snow. I still think the warm air with the system will overrun the cold fairly quickly after  onset...at least for me in West-central NJ. I can see maybe 2 or 3 inches of snow burst followed sleet and some freezing rain in my area. I just don't see these totals (as snow) verifying.

Would love to be wrong however.

Itsca matter of how long it holds the cold air

Frank_Wx wrote:Meanwhile, the 6z RGEM and 0z EURO call BS on the NAM with its depictions of the temps. These models have little to no snow for coastal sections.

For some reason the maps are not showing. Here they are:

Winter storm watch issued for my area for Thursday morning into early Friday afternoon. Current prediction is for 7 or 8 inches.

FWIW the NWS has significantly reduced expected accumulations over the area.

Frank_Wx wrote:Meanwhile, the 6z RGEM and 0z EURO call BS on the NAM with its depictions of the temps. These models have little to no snow for coastal sections.

I'm confused the 00z euro had decent snows for all is that like u said not representative of just snow?

still not see the maps. On my phone anyways.

algae888 wrote:Rgem came in colder nice SWATh of snow from the city north and west it's going to be a close call. I have a question for those of you with more knowledge it seems as if the warm tongue is not going to be below 850 but actually above the 850s. There's a 700mb warm tongue that goes above 0 Celsius for most Coastal locations. My question is is that more of a sleet signal  then say the warm tongue was at 925 or below as the precip would have more time freezing into ice pellets if the warm tongue is at the 700 millibar level?

Yes Al.  Look at this sounding.  Typically, as far as I know the snow growth zone is between 800-700mb.  As you can see by this sounding there is the warm nose you speak of between approx 725-800mb height.  This means the precip starts as liquid.  As it drops below 800; however, you can see the temp drops below freezing which likely leads to an ice pellet formation.  On this particular sounding the temp goes back above freezing around 950mb.  Weather the surface sees sleet or rain depends on how deep the above freezing temp is at the surface and if there is enough time to melt and fall as rain again.  This sounding likely falls as sleet.  (NOTE: If you need me to label the sounding I will if you didnt follow).

If someone who understands soundings sees anything wrong with this please let me know. 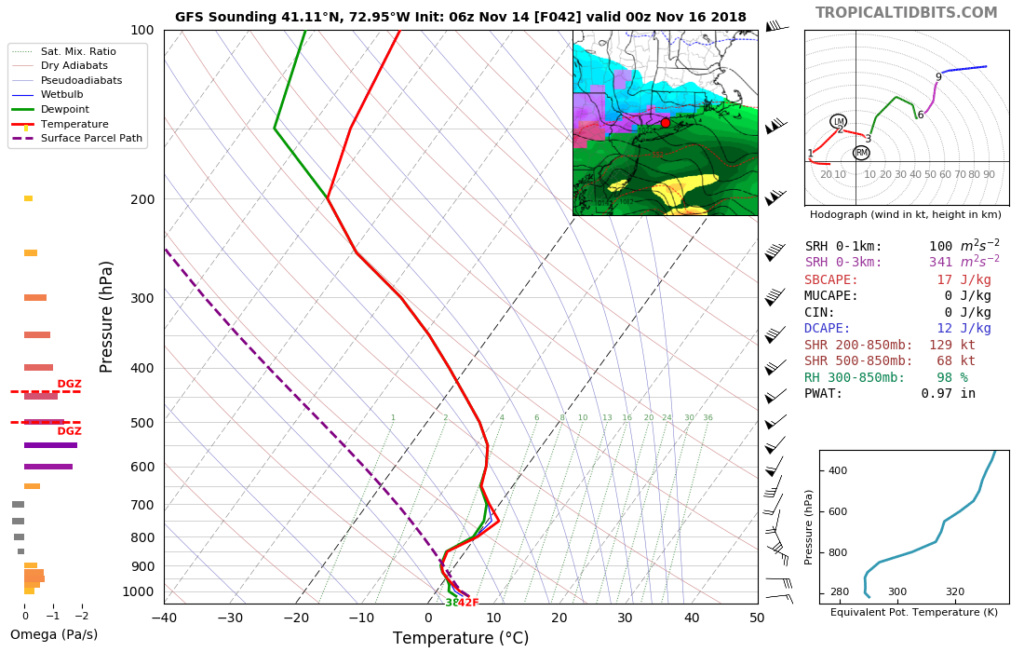 Local news has yonkers on border of 1 to 2 and 2 to 4. Where I work its 2 to 4 in white plains. Hoping we get let put early or have delay Fri but if it changes all rain Fri may not b issue to south but we have kids that come from far northern Westchester.

I guess NWS Albany is waiting for the flakes to fly before they put up any advisories.

Same here Hyde. I expect the 4:30 update to at least have a WSW for Orange County if not a warning or at least a WWA. We shall see.

GFS thermal profiles are notoriously warm biased - hopefully the new GFS will fix this from what I have read.
Here is teh Ukie - snowier and colder all around but again it accounts sleet and zr as snow and 10:1 snow growth where it may not be in some areas.

Listen its the middle of November peeps and where are tracking snow!!! This as Tom and others have talked about will not end until about mid March .....................again this year. Make yuor spreadsheets now for the next 5 months cause we maybe filling them up!!

Are we just discounting the Euro orrrrr...?

I know my opinion has not been the most popular one so Ive kept it to myself as of late, but I still think this has very high bust potential for even areas N&W.

The center of the HP is very rapidly moving off the NE coast as the precip moves in.  winds from the surface through 700mb have already shifted to the E through the S depending on the level you look at and the SST and air mass from which the winds from that direction is coming from is still very warm.  The air source region is riding over watrer temps in the mid 50's through the upper 60's.  There is no doubt the cold air is dense and will be diff to scour out but if this were even 1-2months later in the season and the water temps were in the 40's this would be a diff story.  I really think the warm air will be more influential than otherwise might if later in the season.  Also like Al alluded to earlier there is a 700 mb warm nose showing up in the modeling.  The true depth of that warm nose could be important for many locals.  I actually like Rbs original map right now with a few changes based on new information.  Il do my best to post a map and a write up if I can.

Timing will be everything.  Dew points start very low over much of the area but in a very short time, less than 3 hrs, the entire coastal plain dew points get above freezing all the while surface temps are 32-36 from NW to SE.  IF a heavy band can come in during this window than a thump is possible, but there are dif in where and when the "thump arrives.   This will be absolutely key to who gets the thump of accumulation and who doesnt. Without a strong dbz band of precip within the window even areas N&W will have diff accumulating. 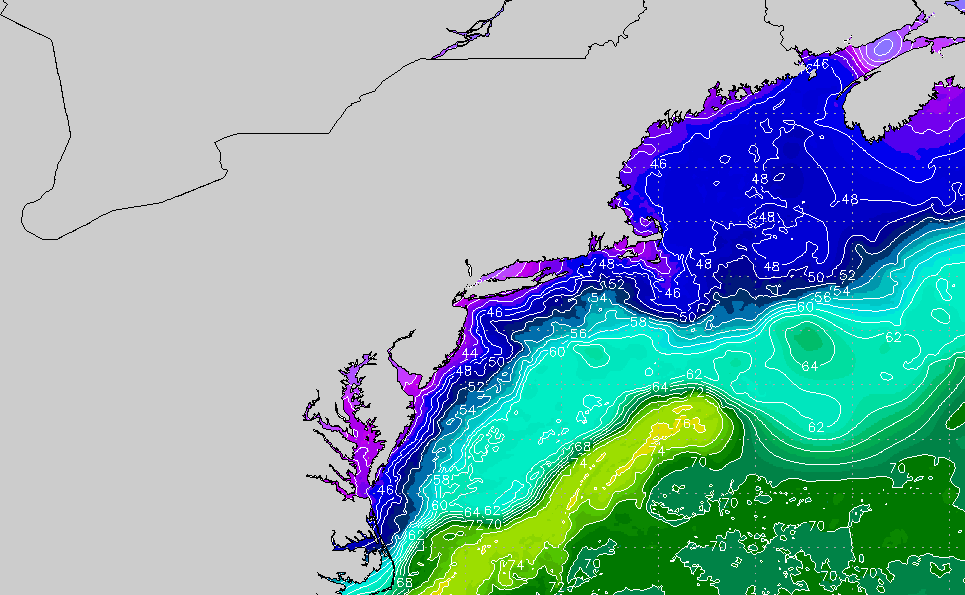 Somebody somewhere is smoking something. Accuweather calling for me to get 3-6, NWS calling for 7 or 8 and the Weather Channel predicting 9-15.

...WINTER WEATHER ADVISORY IN EFFECT FROM 1 PM THURSDAY TO 4 AM
EST FRIDAY...

* WHAT...Mixed precipitation expected. Total snow accumulations
of 2 to 4 inches and ice accumulations of around one tenth of an
inch expected.

A Winter Weather Advisory means that periods of snow, sleet or
freezing rain will cause travel difficulties. Expect slippery
roads and limited visibilities, and use caution while driving.

Since this is the first snowfall of the season, drivers will
need to exercise their winter driving skills. Plan on extra travel
time.

I wonder if the wwa will extend to the five boroughs