Winter storm warning for here in the outer reaches. NWS says 8-12" possible. Fingers crossed because I think it would be the first time I got more than you guys in 2 years.

SO EXCITED FOR THOSE WHO ARE GOING TO GET SNOW TODAY!! I am just happy there is the smell of snow in the air..our time will come..this is not our storm here on the coast...everyone be safe and ENJOY! I will say we have 4 warnings, wind then gale warnings, flooding and small craft...we are going to look at a possible High School for my son and its on Sandy Hook...too bad it will be dark to get pictures of how rough it will be at the Hook

It seems the starting time for Orange county has been moved up, to around noon.

Due to me being in Nashville I do not have my weather computer to create a map, but here is my call for the storm:

Sorry if I missed a region but you can make an assumption of my thoughts for your area based off these numbers.

I am impressed with how long the cold air will stay. I want to warn about sleet or freezing rain which can cause treacherous conditions. Mainly those in NW NJ and SNY need to watch for that.

My amounts include snow that will fall Friday morning too from wrap around.

@Frank_Wx wrote:Due to me being in Nashville I do not have my weather computer to create a map, but here is my call for the storm:

Sorry if I missed a region but you can make an assumption of my thoughts for your area based off these numbers.

I am impressed with how long the cold air will stay. I want to warn about sleet or freezing rain which can cause treacherous conditions. Mainly those in NW NJ and SNY need to watch for that.

My amounts include snow that will fall Friday morning too from wrap around.

Nashville is the best place in America to hang out Frank. Take advantage

Hello to all the members! I'm thinking 2 inches for my area upper bucks/lehigh valley and maybe .1" of ice. Always skeptical with boundary layer issues when trying to get significant accumulations, but i will be happy with anything in November. And if a lot of the long range forecasters are right it should be a great winter. Let's go!!!

I know it's slightly off topic, but has anybody heard from Ray lately? It's a little weird to have a storm happening without his opinions.

Without further delay, here is my first call (issued Monday), followed by my final call.

As you can see, I followed the general theme of my first call and gave it some decent weight, as it undoubtedly was on the right track, but certainly needed some tweaking. After some hard-fought inner battles with my mind, I decided to stay a little lower than some of the guidance, and also lower than what current radar imagery is suggesting. My main reasons are that 1), synoptically, this system will be decaying by the time it gets here, so I am not entirely thrilled with the idea of a substantial wraparound (also known as Cold Conveyor Belt, CCB) signature on the backside. I think that the warm advection/isentropically forced precipitation at the beginning will end up being the main show, with maybe an additional 1-3" on the backside at most. Secondly, this is an interesting hybrid of two types of systems, each of which has its own precipitation bias. The first is what I will refer to as a "Mason Dixon Slider", where the main surface and mid-/upper-level features come in unison from the west-southwest up the Ohio Valley and then scoot across along or very near the Mason Dixon Line. Generally, these systems tend to be good for a 3-6"/4-7" region-wide snowfall (on the average), with front-end snows transitioning to a relatively short period of mix before shutting off completely. The other system, however, is obviously a coastal, which usually brings a more substantial precipitation signature along with colder air (if the setup warrants). Seeing as though this system has both components I was severely torn on which way I should lean (higher or lower) with my predicted amounts. Factoring in my initial ideas, as well as really looking at PWAT anomalies (which are actually not that impressive) and also under the analysis that this is a decaying mid-level and upper-level system, I decided to hedge a little lower than I would have otherwise expected.

I also factored in elevation (climatology), as well as hedge on a colder overall solution given the Northern Hemispheric setup, and while it may not be evident at the coast, where I still do not see appreciable accumulations, my other values have been increased to reflect this. As I mentioned earlier, our high pressure is substantially further west, even west-northwest of where it was "supposed" to be at this time, which lends some support to my thinking of an overall colder solution. As a result, we can capitalize on a longer ageostrophic flow at low levels, and remain frozen longer. You will notice that I did expand my maximum snowfall range a bit further to the northwest versus my initial forecast, and that is due to an overlap between the edges of both the initial isentropic forcing mechanisms in addition to what I think will initially be a healthier looking wraparound feature that decays as it comes eastward. Anyway, I wish I could be more detailed, as I usually am, but I really need to get some rest.....I kinda have to be awake in five hours lmao Happy tracking!! Oo, before I forget, if you have any questions or comments regarding what I did and/or why I did something, please feel free to ask!! I'll do my best to respond at some point haha Thanks!! 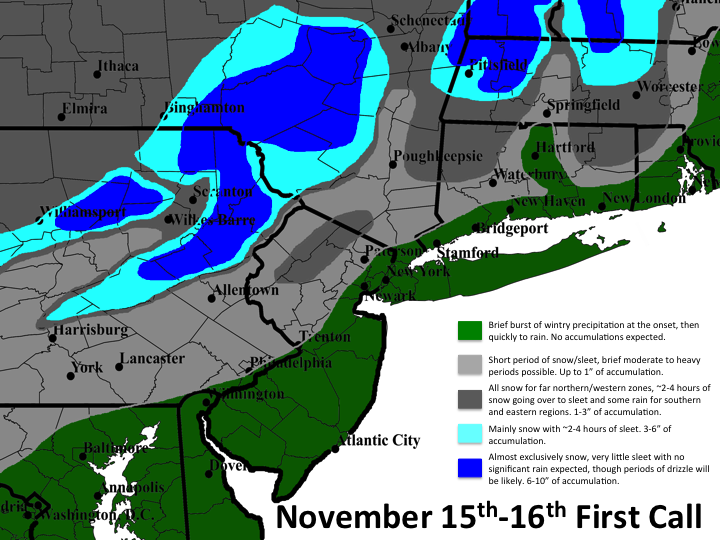 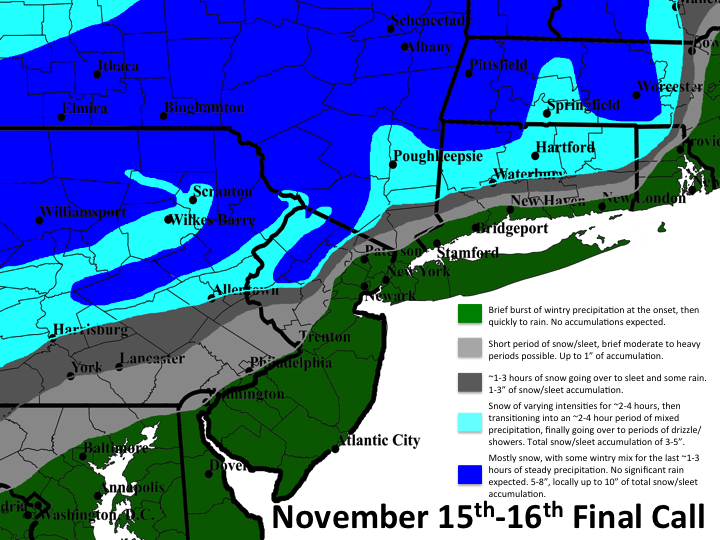 Rb balt and dc are already reporting an inch of snow and still snowing. It was actually raining at snowshoe with a temp of 19*

Let's see how long the wind stay Northeast the GFS which was the warmest model had the winds for LaGuardia at 06 0* to 080* at 7 a.m. they were actually 040*. This from a met from another board we toss the GFS 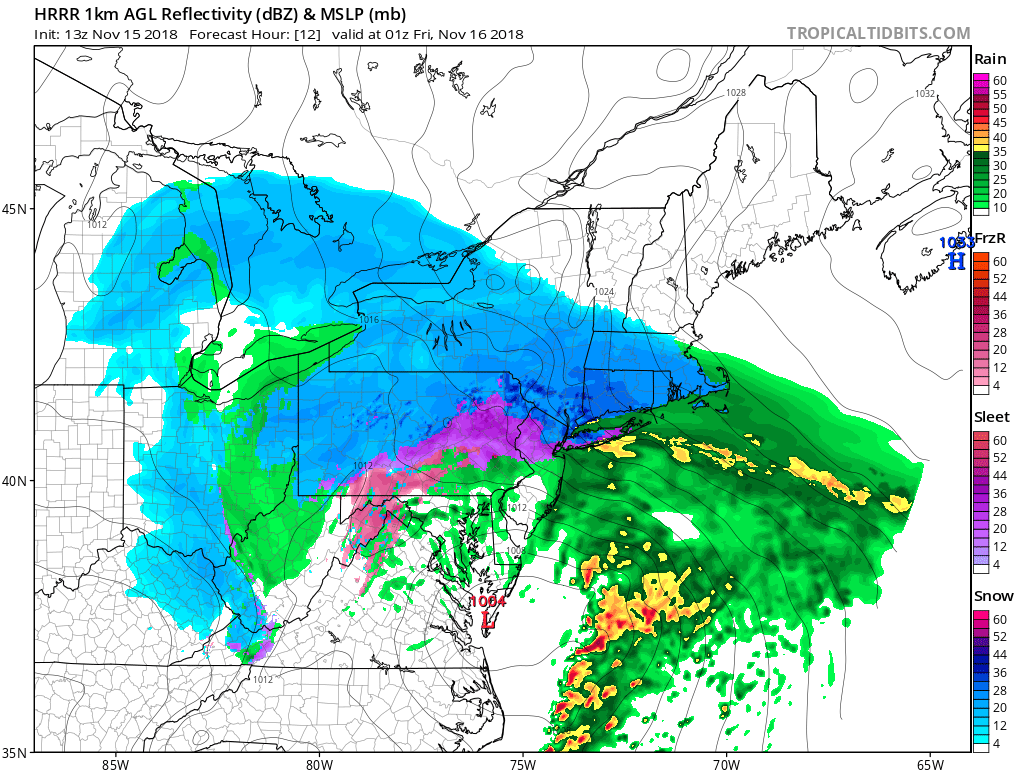 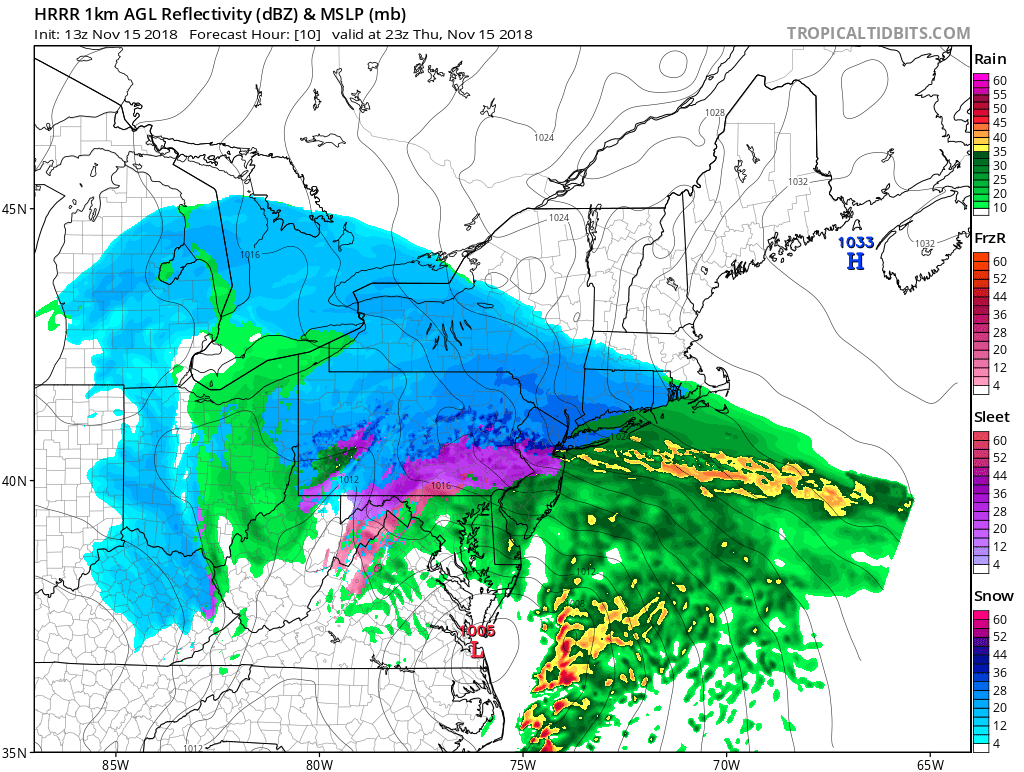 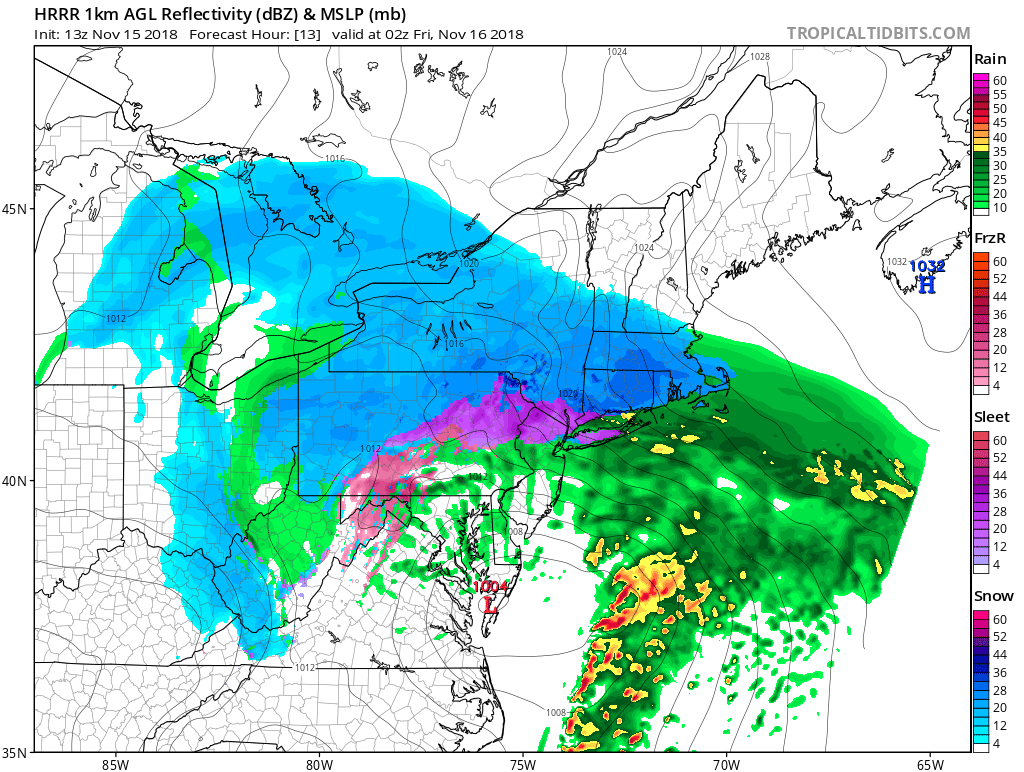 @algae888 wrote:Rb balt and dc are already reporting an inch of snow and still snowing. It was actually raining at snowshoe with a temp of 19*

Yeah slightly exceeding expectations in DC area. Suburbs not too surprising, but decent acclumations even within DC itself is. Maybe a good sign for us? it the first measurable snowfall in Nov in DC since 1995.

I noticed some hints of this on the models yesterday. I do think that as some dry air moves into the system it looks like the "rain portion" of the storm (for lack of a better term) may bring less precipitation or more showery precipitation than the frozen portion, which looks to be steadier and heavier. That said I still wouldn't bump up my totals from my map yesterday much because I don't think the duration will be that long and once the sleet/frz starts mixing in accumulation growth sloooowwws dramatically. If I were to alter anything on my map yesterday I might change my 1-2" to a 1-3" with locally 4 or 5" in select higher elevations (esp further N&W), and my 2-4" area to a general 3-6" area.

Anyone around? Feel like I'm tracking all by myself...

Reports of 4 in of snow just outside the DC metro area and still snowing there . 29 degrees here with a dewpoint of 13 from a met on another board the ceiling is three to four thousand feet, there is not going to be a lot of virga it's going to come roaring in like a lion

Winds at 11 a.m. still Northeast locking in the cold air I think we're going to be in for a pleasant surprise this afternoon and evening

Anyone resporting from southern jersey??

Looking at the edge closest to NYC and nj the 3rd line is quickly moving inland and my car says 34 degrees. So ur getting 29? That's a pretty big diff for same geographic location plus I'm in Eastchester today which is a tad further inland away from the river.

syosnow94 wrote:Scott get me to 2” so the grass is covered at some point and I’ll be thrilled

Fron a met from another board that at 15 Z the six Z nam had a warm tongue at 750 MB of + 2.3 Celsius. In Washington DC clearly that has not happened let's see if the same happens up here.

Current soundings over Nassau Suffolk boarder have an above freezing nose at about 800-825mb.  But notice the dew point in green.  This should cool some, at least initially as the precip moves in and saturates the column.  Surface dew point is still in mid 20's.

One important thing to keep in mind is even though areas to the sounth have seemd to over achieve, the HP positioning was parked over the Vt region.  However, it appears that it is begining its transition off the Ma coastline as we speak.  If you look at the sounding below you will see in the bottom R corner the winds have already shifted at the surface to almost due east, maybe ENE, and at 800-1000mb out of the south.  Now the site I look at to see actual observations still have winds a little more ENE to NE, but this likely wont last for much longer.  The precip has not made it in yet.  Again once that HP moves off the coast the conditions along coastal plain will rapidly transition warmer because SST are still 55-65*.  Again while early reports to the south are encouraging when the precip makes up to NYC lat we will have to monitor conditions.  Again dew points are still in good position to drop temps under heavier banding, but it has to happen soon. 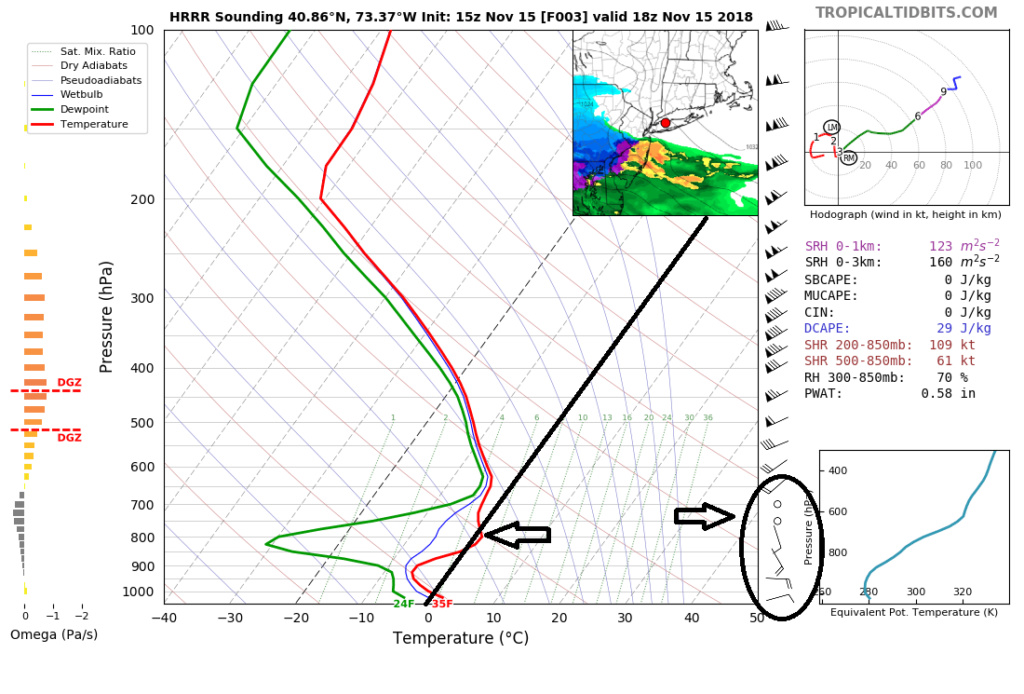 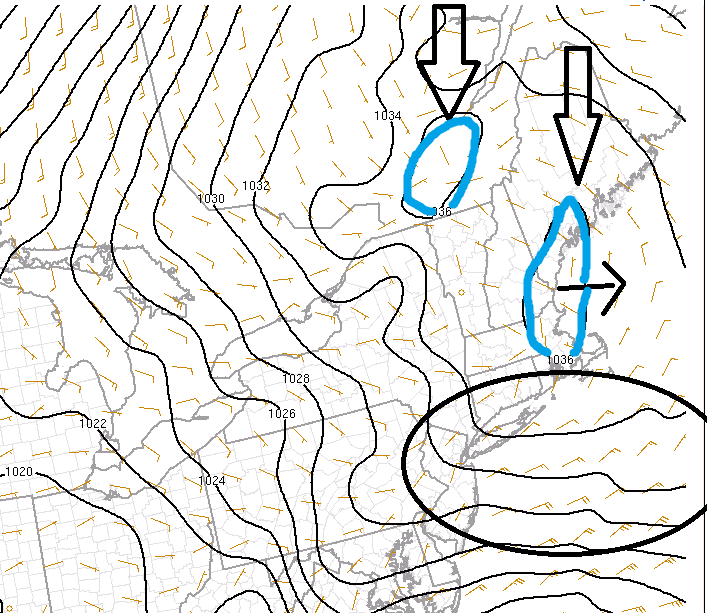