The main PVA associated with the 500mb trough is coming down from our N&W, which is where you also find the primary surface low near Lake Erie. 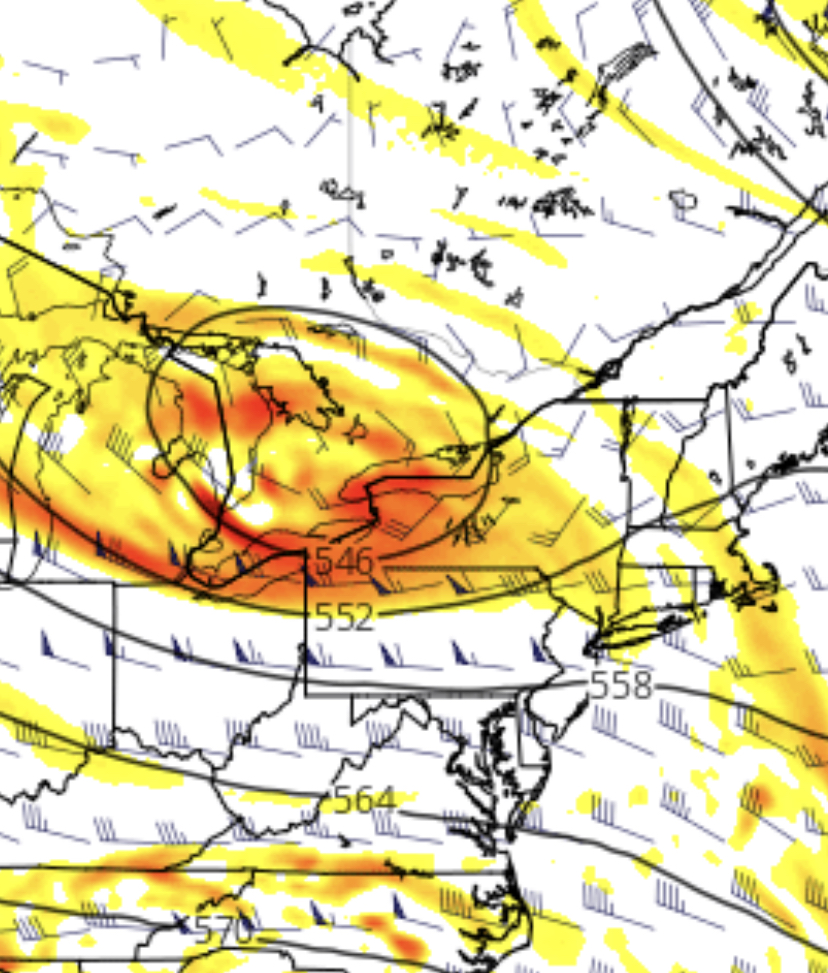 By Sunday night into Monday, the main upper energy and trough moved south and east for most of our viewing area. 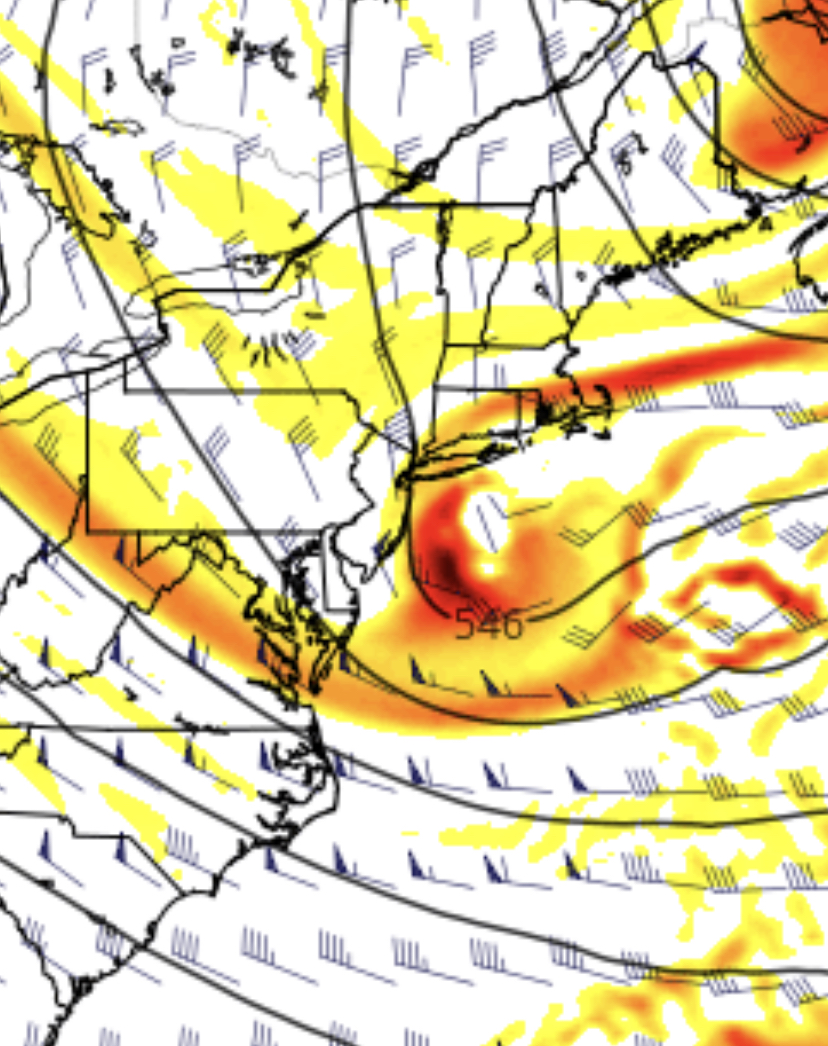 N&W of NYC, where temps hover at to below freezing, will do well and see their first accumulation of the season. I believe you’re in line for 3-5”. The higher amounts of 6”+ will be confined further north near Mikey-land in Albany. There’s a lot of upper energy passing through that will translate to substantial snowfall rates in central NY.

Here’s where the 32-degree line is at 3pm tomorrow which is when there’s moderate precipitation falling over most of us. 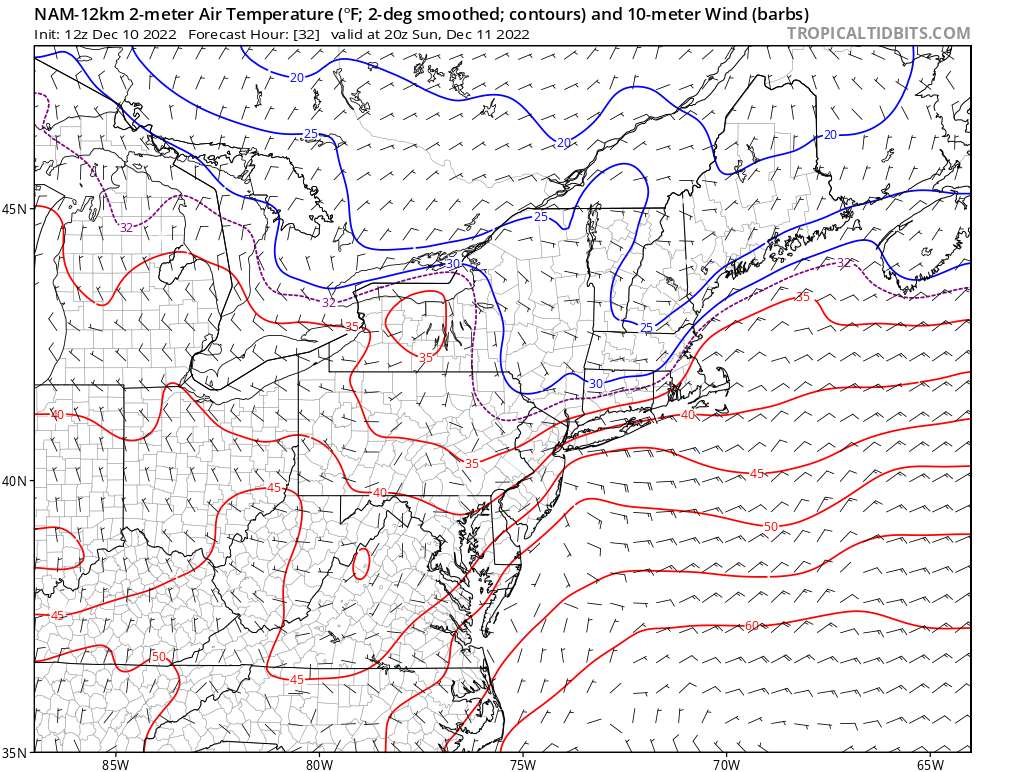 We’re seeing temps above 40 degrees in parts of NYC and Long Island, and still above freezing across central and northern NJ. While I do expect snowflakes to be flying, I think there will rain mixed in and that will hinder snow accumulation. A better chance is likely on Monday when the main energy moves off the coast and a secondary low tries to take over. However, by then I think the storm will be too far off the coast and disorganized. Maybe a sneaky norlun-like trough delivers an inch or two of snow for parts of the coast on Monday but I wouldn’t get your hopes up over it!

I am far more interested in the event late next week for a widespread snowfall event. We’re looking at significant high latitude blocking to take shape. Normally, that’s a sign for coastal storms. The main ingredient for a Godzilla

This is a system where the upper air temperatures seem cold enough for this to be primarily snow, but the surface temps (and just above) are just warm enough to rain on our parade a bit. So there will definitely be rain to deal with at the outset of this especially south of I-80. Probably one of those events where you see the occasional flakes mixed in with the rain tomorrow  afternoon, and if you get a burst of heavier precip, maybe it looks more snowy for a bit. North of I-80 it likely is cold enough to keep this predominately snow throughout hence the more measurable amounts.
The thing that is of some interest south of I-80 is what Frank points out in his post. All the models to some degree seems to keep the precipitation stuck over the North Jersey/NYC area - what Frank described as the sneaky norlun-like trough (and sneaky they are!) - through early Monday morning when it is finally cold enough to snow. If that modeling is correct it is very possible early risers Monday morning wake up to a steady snowfall and some light accumulations even in spots that were primarily rain during Sunday afternoon/early evening.

Frank_Wx wrote:The 12z NAM between the hours of 5am and 11am seems to have “backside” snow along the coast. If true, this could leave a nice coating to possibly one inch on the ground. 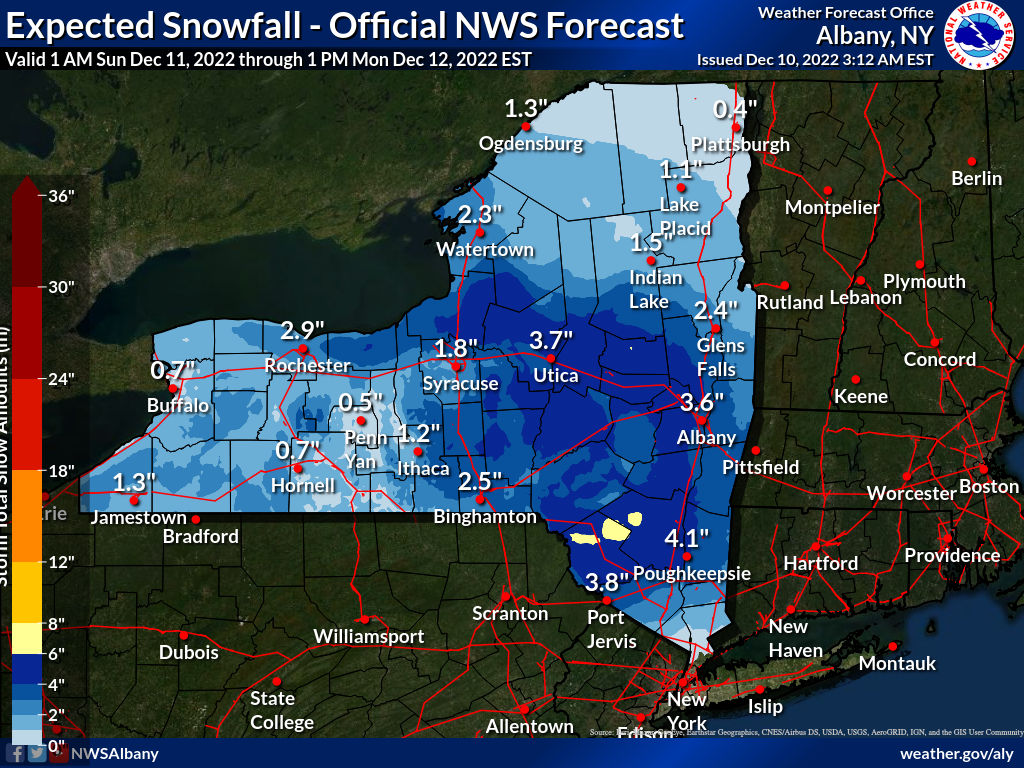 I think 2-4 for LHV Orange Country right into the MHV valley is a good call.  The soundings at 1 PM on Sunday on the 3K NAM support below freezing in the entire column and at the surface.  The lapse rates show significant instability of the atmosphere about 620 mb.  So based on this it will snow moderate/heavy and it will stick.  This should be nice event for those folks.  Enjoy! 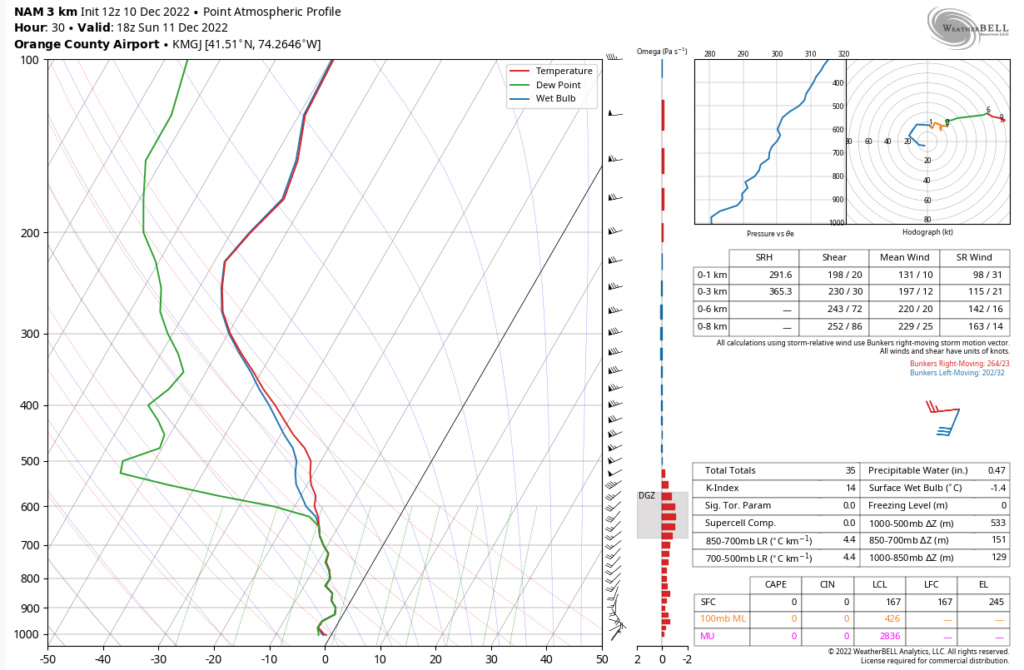 The only way below rt 80 gets into the action IMO is through possible inverting trough to enhance the lift as the storm starts to pull away.  Very tricky to predict that kind of setup, but if it unfolds over 1" can easily fall IYBY especially on colder surfaces.

This is strong vorticy over NNJ, HV and NE PA  that will casue the best lift and dynamics = dump snow, its in line with the Hi Res HRRR 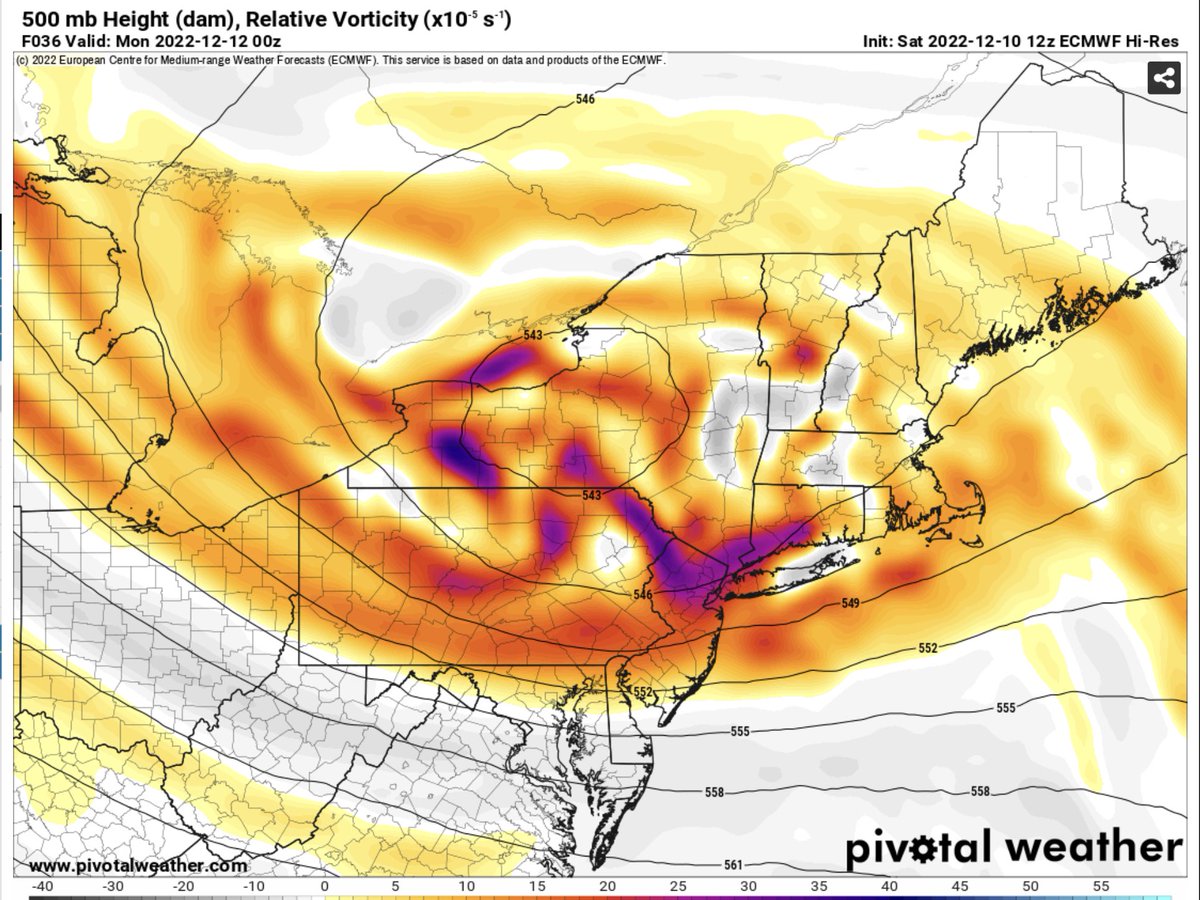 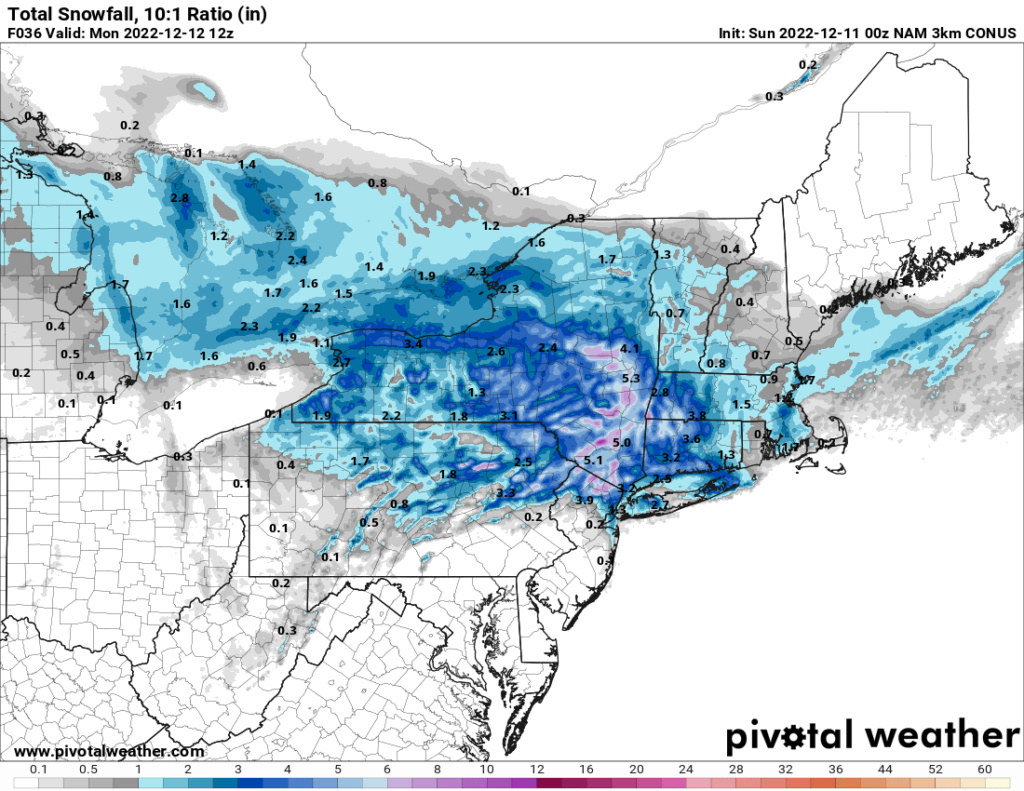 Some of the model guidance has 6"+ snow amounts for me here in Albany. And who knows, maybe one of the users in the lower Hudson Valley region (dkodgis, hyde345, or perhaps Doc/CP (though long shot for those two) may get....a Godzilla(!) from this 11th to 12th system

Though said Godzilla is more likely for the peaks of the Catskills. But you never know with systems like these.

34.5* holding steady. Going to be cold and raw today here until we see the changeover, feel bad for Giants fans going to the game. Bad enough they are playing the Eagles, but to sit in damp rain showers for the afternoon is going to make it just miserable. Happy to see the snow line moving further south and getting me in the 1" area instead of a trace. Just enough to get us in the holiday mood, good luck to those in northern areas!
_________________
Janet

I think folks above the purple line stand best chance to see accumulations today.  The mid-levels are cold, but towards the surface is above.  The CAD is pushing towards the interior.  Tomorrow I could see NE NJ, North Shore LI/CT possibly getting some snow with enhancement from the storm as it pulls away.  Have to watch that... 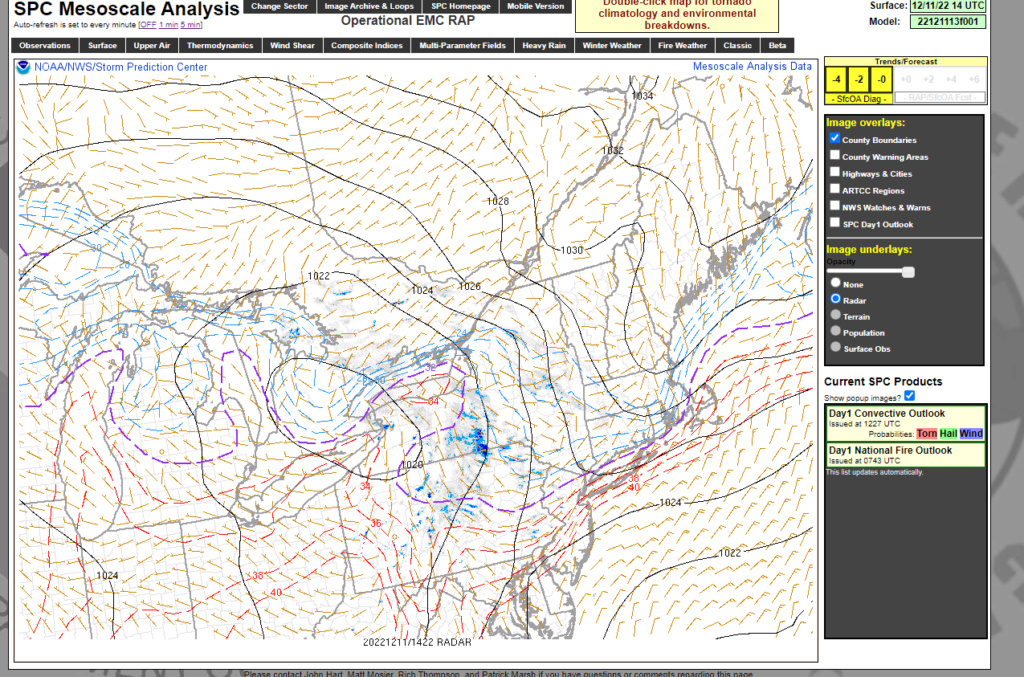 Frank_Wx wrote:It feels like this system trended colder overall, and I can now see 1-2” accumulations for parts of northern NJ that I didn’t think would see much. Still like 3-5” for N&W in Doc/CP land.

LOL, Doc/CP land. Will be reporting on this up here Frank.
This is the 62 anniversary of the December 11-12 1960 snowstorm that hit the tri-state area with over 20 inches in some spots ( except Central Park which probably reported 8.5,LOL).

Your 2 miles SE of me by a crows flight and I've had flakes on and off all day, must be the vibes down there as a Mets Fan LOL!!
Nice gentle moderate snow now.

Nice radar depiction of what is coming into today.
Overnight stuff is not on here as the secondary pops off the coast: 33nRain Qtown map

Your 2 miles SE of me by a crows flight and I've had flakes on and off all day, must be the vibes down there as a Mets Fan LOL!!
Nice gentle moderate snow now.

Nice radar depiction of what is coming into today.
Overnight stuff is not on here as the secondary pops off the coast: 33nRain Qtown map

About 1 inch on the ground in Stillwater NJ at 1190 feet altitude, grass covered sticking to roads, salt trucks just went thru, Temperature 31 degrees . 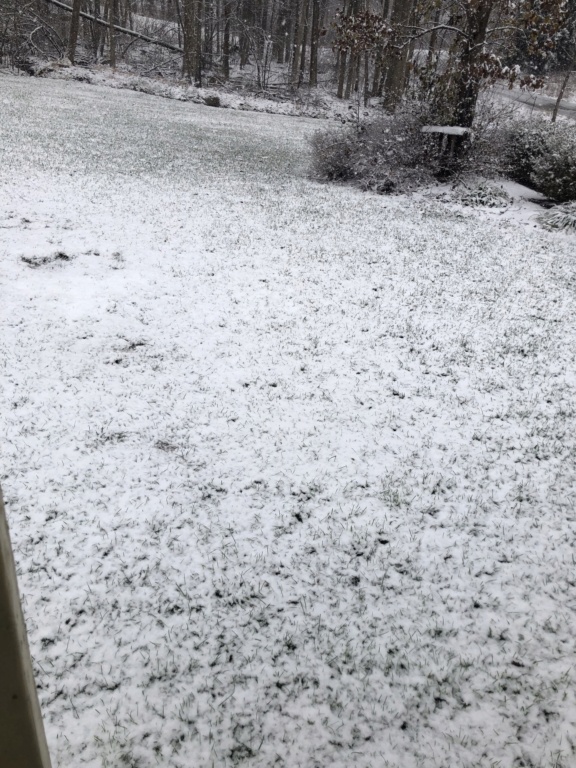 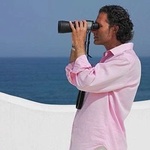 It’s been snowing lightly here on and off all day.  Really coming down now, sticking to the grass and deck.

(Originally posted this in the wrong thread!)