Wow I have a lot of lawns that are almost bare of snow. Some lawns in the shade have 3-6" on them. How do you have so much more snow than me?

Today reached a high of 56. Current snowpack status is 3-6" in areas that get the most sun, backyard which is out of sun snow is still 8-12"+ in several areas.

Quickly down to 41 after a high of 60 earlier today. Interior areas still of CNJ still very warm. 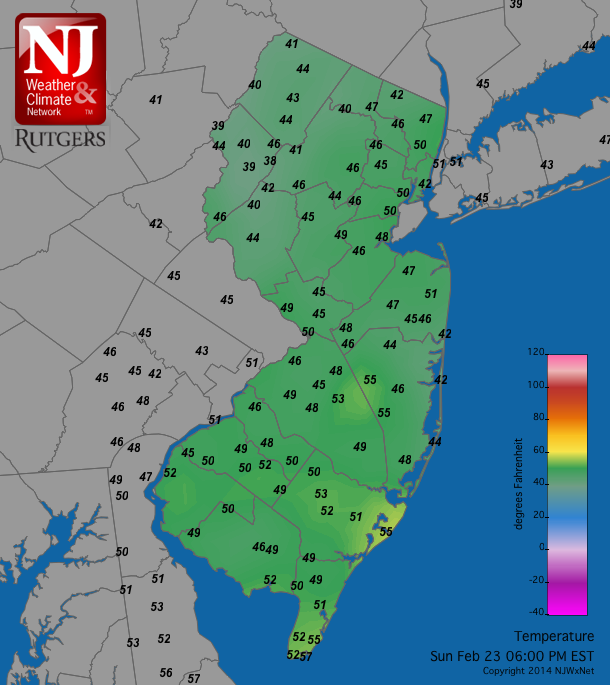 26* and clear skies. One of the local Mets was asked by one of the anchor people would things start to warm up in March.
He gave a definitive No. He said it would probably be below average temps for the first 3 weeks of the month. Hopefully we
can get a few snow events before our season comes to an end.

Lots of snow pack left, but mostly UGLY and dirty - yes the yards are white still, but really need a refresher to whiten the piles and the roadsides…30.2* this morning

Last night was nothing here, probably rained, anyway realized I forgot to post about my storm chase on 2/21, what happened was it was the most eerie thing ever, went about 6 miles north where the strongest cell was supposed to hit. Fog was very dense and it was cold, all of a sudden the sky got a very dark brown color suddenly and it started pouring harder than Ive seen in a long time, it got very windy and there was lightning and thunder, fog was still there but began blowing to the west. About 15 lightning strikes later and a while of heavy rain it pulled to the east fast and according to radar began to weaken as it ran into the cold air. Fog only lifted after the storms passed, was very weird and eerie.

The snow showers won't be the biggest story. The cold will. Saturday morning temps will only be in the teens

11* and cloudy skies with a calm wind.

Frank, you are amazing, if my eyes do not deceive me the Euro has a storm, albeit not as strong as shown last week on the 1-2nd going from central US and off the coast right near benchmark.  Did you not say it would start showing this again Tuesday/Wed (today/tomorrow), your just amazing.  And if I am wrong your still amazing lol.

Got a quick burst of heavy snow on the northern edge of this disturbance to our south.

Sunny here in the Bronx! Cold though, back to ol' man winter. Hoping we can get something interesting out of this. 3rd looks interesting, are we going to start a thread for it?

Second thought probably still a bit early for a thread on that yet.

No snow melt today even in sunny areas. What's on the ground now is not going anywhere quickly. Lot's of snow and ice compacted into the foot or so that remains.