The upper air pattern around that time will feature and arcing ridge with an inverted trough in the GOM. This type of setup is prone to producing a southerly flow that takes tropical moisture in the GOM and western Caribbean and takes it up the coast.

As you can see, the CMC develops a tropical entity in the GOM around the 7th of June, as does the GFS. While this is possible, I think conditions in the GOM will not favorable for development.

TCHP is highest east of the Yucatan but virtually non existent in the GOM. There is a chance it increases between now and then in the eastern GOM, however, which bares watching.

SST's are actually running slightly above normal in the eastern GOM (the area of concern) but the fact that TCHP is low and there will be unfavorable upper air conditions is why my confidence remains low. It certainly is not set in stone this far out. If something does form, tropical storm is probably the highest intensity it reaches.

What is most likely to happen in my opinion is a large area of tropical moisture being fed into our area due to the upper air pattern of a ridge overhead with an induced southerly flow. This may turn out not to be much of a big deal but wanted to give everyone the heads up of the potential it has to reach tropical intensity.

This is the area to watch. Not all of this will be from the tropics. There is a series of stalled boundaries coming down that could spark some convective storms in the mid section of the country.

Hey nFrank, just cuious even though this may not be fully tropical how come its not under the tropics thread? And I hear alot of people saying we may have Arthur next week, the GFS has centainly gotten stronger and actually has the pressure lower as it rides coast to 990mb if my mind services me correct. Anyways I see your point but I also think a TS is possible although holding together up the coast will be difficult, but the warmer waters would aid in a fuel. Just my thought.

Ahh right I thought of that after the fact.  Makes sense.  I posted some images in the tropics section, not that they are a for sure thing or anything being 240+ hrs out but still was quite a run for 12z GFS. CMC didnt show much and Euro did, so we still getting a lot of flip flop.  Some tropic sites I follow and RM feel there is so much going to be going on down there thats why the models are having a difficult time.  By midweek hopefully we will have a better idea. Oh and even if just a rain maker could we be looking at the same severe double digit flooding FL might get? That would be really bad, I also noted that the low seems to stall over us once it makes it up this way which would make things even worse I imagine. 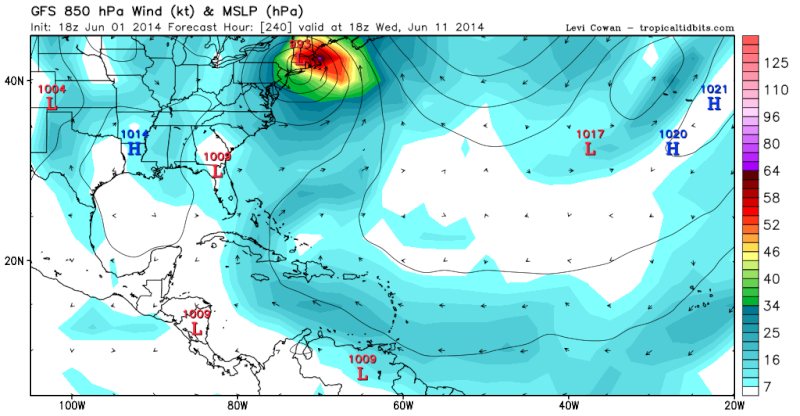 rainfall totals: This would be disastrous if it happened, but its way to far out now as we know. Frank if this is in the wrong place let me know. 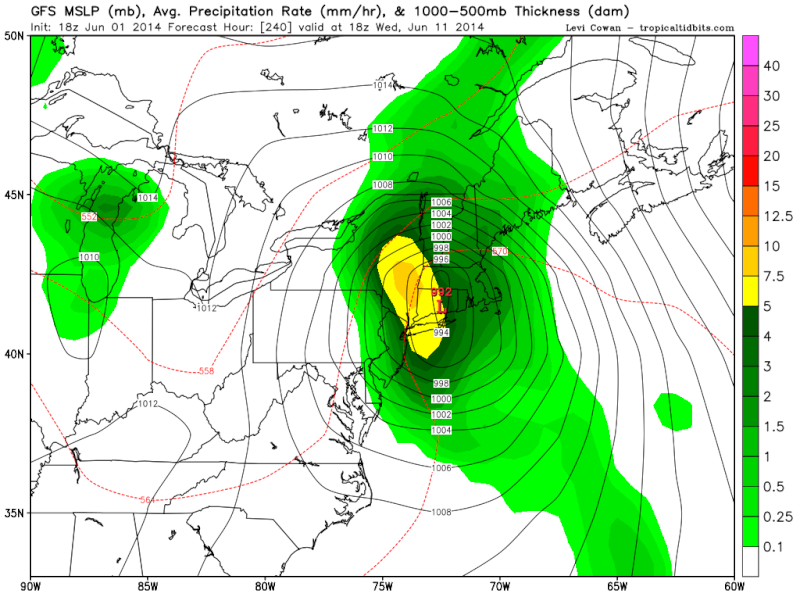 Sure do, its back and forth with this thing.

@jmanley32 wrote:Sure do, its back and forth with this thing.

last nights 00z and todays 12z GFS has nothing for us.

Thats not true, I watched them both. 264 hrs on 00z and 12z it goes OTS, 18z was back again for us, its all over the place we just have to wait another 5 or so days things will become clearer.

If this study is indeed correct, then it would just highlight either that people are idiots. Anyone in the path of a hurricane must heed caution no matter what the gender of the storm is.

Yeah that is so dumb mugs. Frank you havent updated on this in a bit, GFS is still holding and ensembles show some pretty healthy storms heading up this way. Are you still strong on that its not going to develop?

i think we have to move the date up a few days. nothing happening between the 6th and 10th actually the weather during this period will be beautiful. if we do get tropical system it wouldn't happen to at least the 14th or later per latest gfs

@algae888 wrote:i think we have to move the date up a few days. nothing happening between the 6th and 10th actually the weather during this period will be beautiful. if we do get tropical system it wouldn't happen to at least the 14th or later per latest gfs

looking very unlikely that there will be any tropical development in the eastern gulf. gfs keeps trying to develop a system but it continues to delay its development. I think this threat is over especially for us. if you like hurricanes don't worry its still very early. BTW jman when you see a model spit out 10+ inches of rain don't fall for it. something like that for our area happens once in a lifetime. don't get caught up in extremes.

Yes I know still interesting to see, never said I thought it would happen being the majority of models showed much less. BTW I have seen that much rain more than once up here (in CT) and I am only 32. Anyways looks like 90Lmay develop into depression but hit Mexico, very long range shows a wave coming off Africa (will never survive at this time of year) and something around Florida in the 10 day seperate from 90L. We will see GFS so far isn't make a good introduction to the hurricane season, hope it does a better job if anything real threatening rears its head.

Hah, Frank I think we'd better move this time-frame up again, I don't think we should close this because the GFS and GEFS are still showing a formidable storm possibly hitting our area in the 15 day. But I do not see it happening in the 12-15th, maybe more like the 20-25th. I checked out the 18z GEFs and there are some scary scenarios for NJ and NY there, quite a few more than one or two, actually near half of the 20 stamps show a strom TS or a hurricane some making landfall in the area some OTS and a few just remnants. If you have the ability to look I would check them out. It doesn't make a lot of sense though why the GEFS is so different than the GFS which takes it into the GOM and has 3 landfalls (yeah ok). Thats total garbage. Other runs preceeding that had it hit FL and head more northerly. Maybe the GEFS is onto something? I dunno, you know a lot more than I do. So far the Euro and CMC have not caught on so thats not a good sign since especially the CMC is historically our heavy hitter. Wait and see I guess.